SB Arrives in the Last Frontier 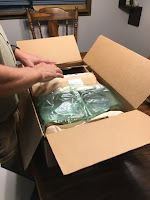 The carefully packed box arrived around the middle of last week but things around here have been rather hectic. Today, we cracked open the box to see the treasures it contained. During this time I was explaining to Bridget and my mom the background and the adventures the little wooden scooter had been on. My mom had remembered hearing about Bob in the past as I had something delivered to her home that was partly Bobs. (Sena headsets. We had purchased a pair and split the order.) 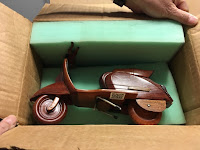 The little scooter was well protected during its travels from the mile-high city. Bob had mentioned several times that he had wanted to visit Alaska but felt, like many others, that a certain kind of bike is needed before venturing to Alaska. Many scooters have made the trip including traveling up the haul road to Prudhoe Bay. There are no plans to travel up the Dalton but a trip well north of the Arctic Circle is in the works. I'm not sure how much travel will be by motorcycle but we will definitely get in a few trips. 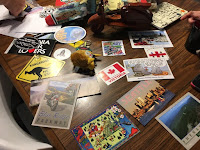 It was great fun to see all of the memorabilia following along. Fortunately, I was able to find and print the draft post that Sonia had started that had a nice map showing all the stops along the journey. That will make a great introduction to the coffeehouse group. It's unfortunate that SB will not be able to meet George but I think that he will be a hit at the February Airhead.org meeting. 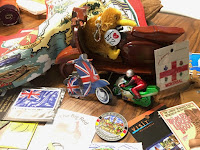 I should be feeling well enough to get some miles in on the Ural in a week to see a few of the local sights. SB should be acclimated to colder temperatures after recently spending time in Colorado. Alaska should be a walk in the park.
Posted by RichardM at 5:34 PM