My bike was pushed over

It started out as a glorious morning.  It was cool around 2°c , lightly sprinking but bright, so I decided to ride my bike to work for the first time this year.  Up until now I had only been riding on weekends.  It was nice to slalom my way to work and savor the freshness of the morning 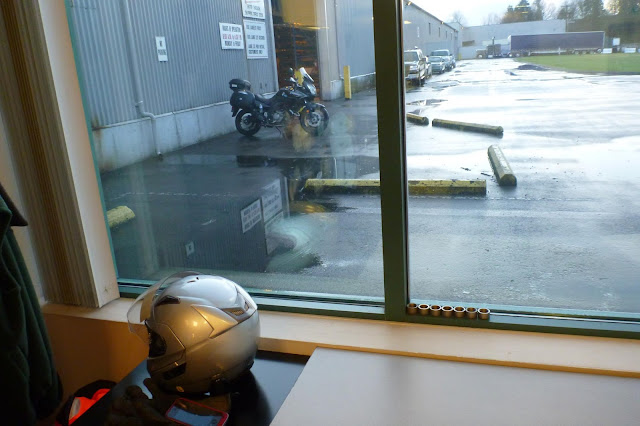 I arrive at work and park in my usual spot outside my office window where I can stare at it all day.   After work I eventually make my way home to see a few piles of dirt 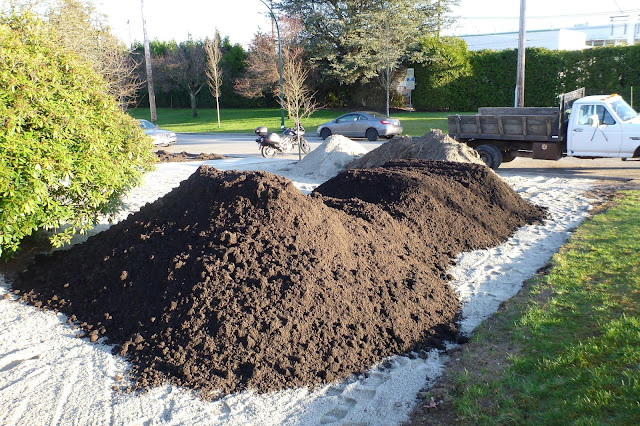 I didn't think anything of it at the time but notice that white truck on the right of my bike.   I usually park in the  back under my carport 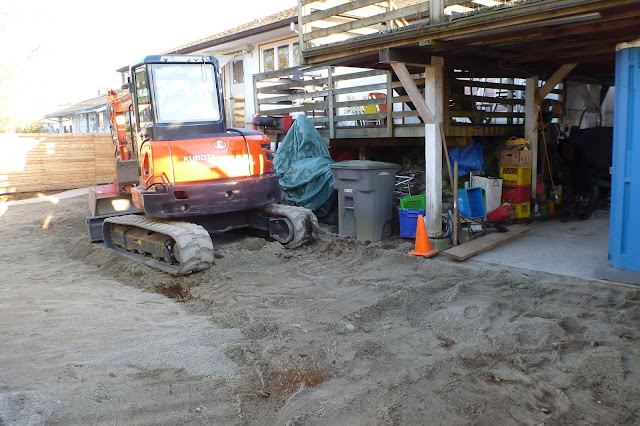 but they brought back the Deere machine and added a few inches of sand. 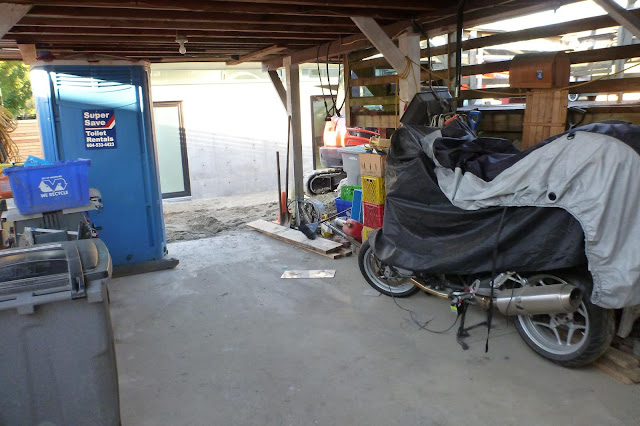 Then I notice that they also moved the Toilet booth under the carport which infringes on the space where I normally park my Vstrom, so I decided to just leave my bike out on the street in front of our house, lock it up with my cables and put my motorcycle cover over it As I knew that workers would be here the next day to smooth out the sand and topsoil, I was respectful to park my bike at the end of our newly poured sidewalk to keep out of their way 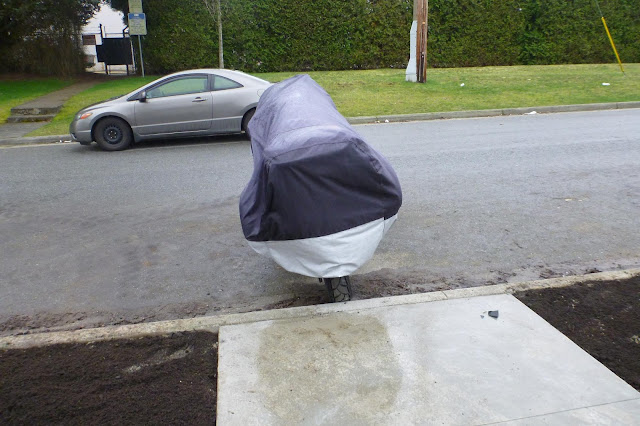 Safe and sound, so I thought.    I didn't ride to work this morning as there was frost on my windshield and I don't ride when there is threat of slippage on the roads.   I commute to work in my commuter car (the Honda in the background) and when I come home after work I glance at my bike and I notice that 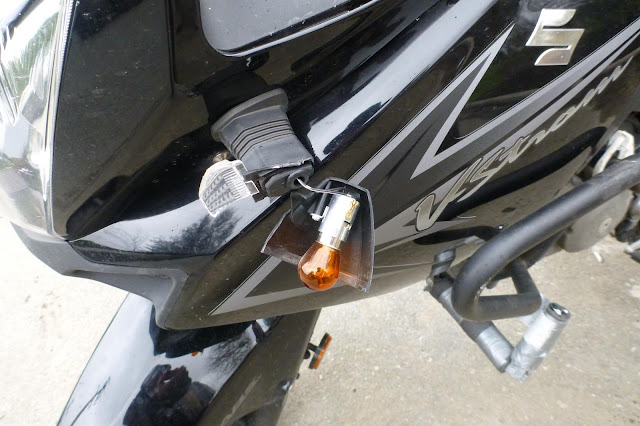 a broken left turn signal with bits and pieces of plastic on the ground.  My crash bar is also closer to the bodywork than the other side.   Further inspection reveals some scuff marks on my front fender 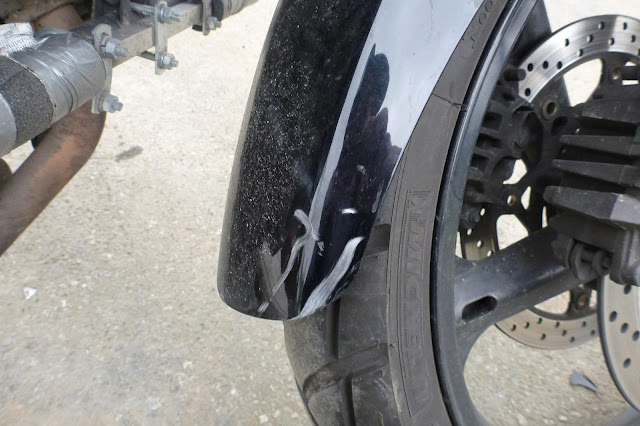 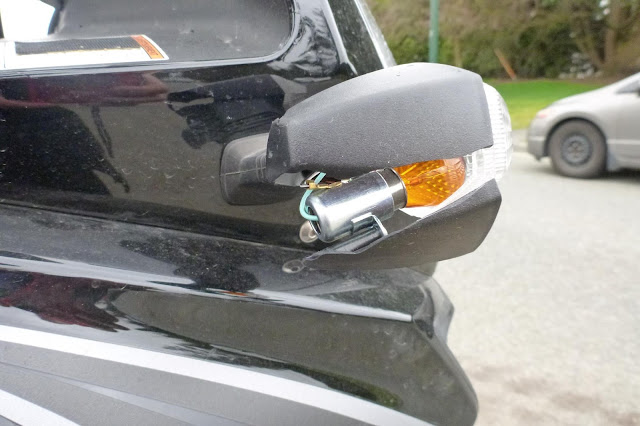 On the ground is my broken RAM Mount 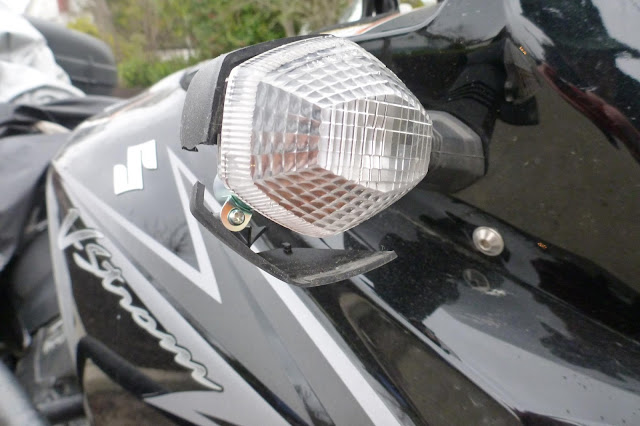 I am a bit confused, how could both signal lights be broken.  My bike cover is also shredded in a few different places on the left side too 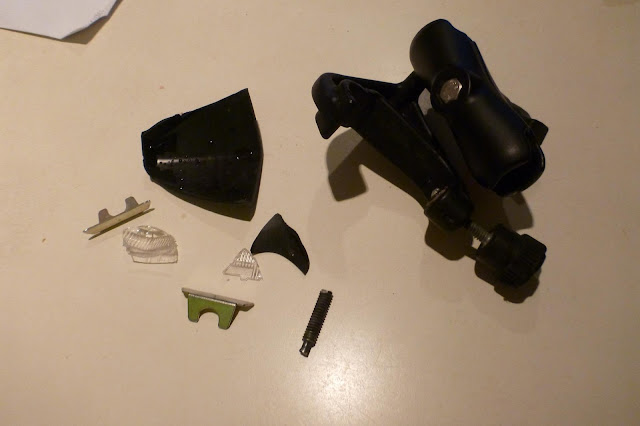 I managed to find a few plastic pieces on the ground, along with my broken RAM mount.

It turns out that the white truck was returning with another load of topsoil and parked on the right side of my bike but due to the weight it rolled back and bumped into my bike on the right side where it fell onto the ground on its left/kickstand side.    The tailgate must have hit the right signal light directly and ripped the bike cover at the same time.   When it fell it scrapped the side cases and ripped the bike cover in several places as well as pushing in the crash bar.

We immediately complained to the Contractor and it appears that it was already reported to them by the landscaper subcontractor.   I suppose that having more battle scars is a badge of honour.