Last year on my big tour across the Country,  I carried an inflatable air pad which I bought from MEC: Mountain Equipment Co-op  (similer to REI or Cabellas)  (click here)   It was a Reactor 3.8 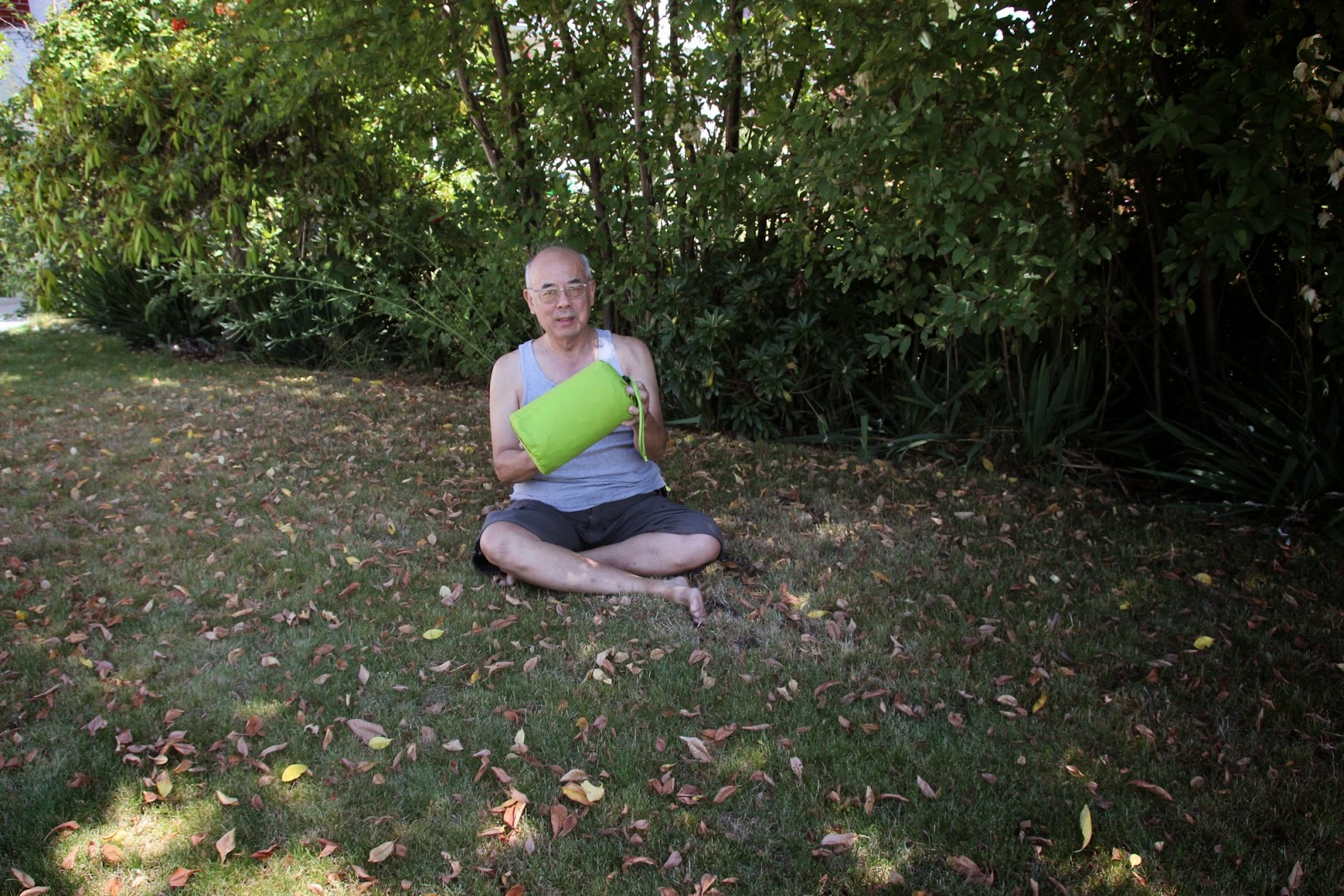 Here it is.  It packs small and starts to inflate by itself except you have to help it a bit near the end to make it more firm.   I didn't give you any statistics but I camped nearly 1/3rd of the time, and I also used it when I was hosted to make the floor, less hard 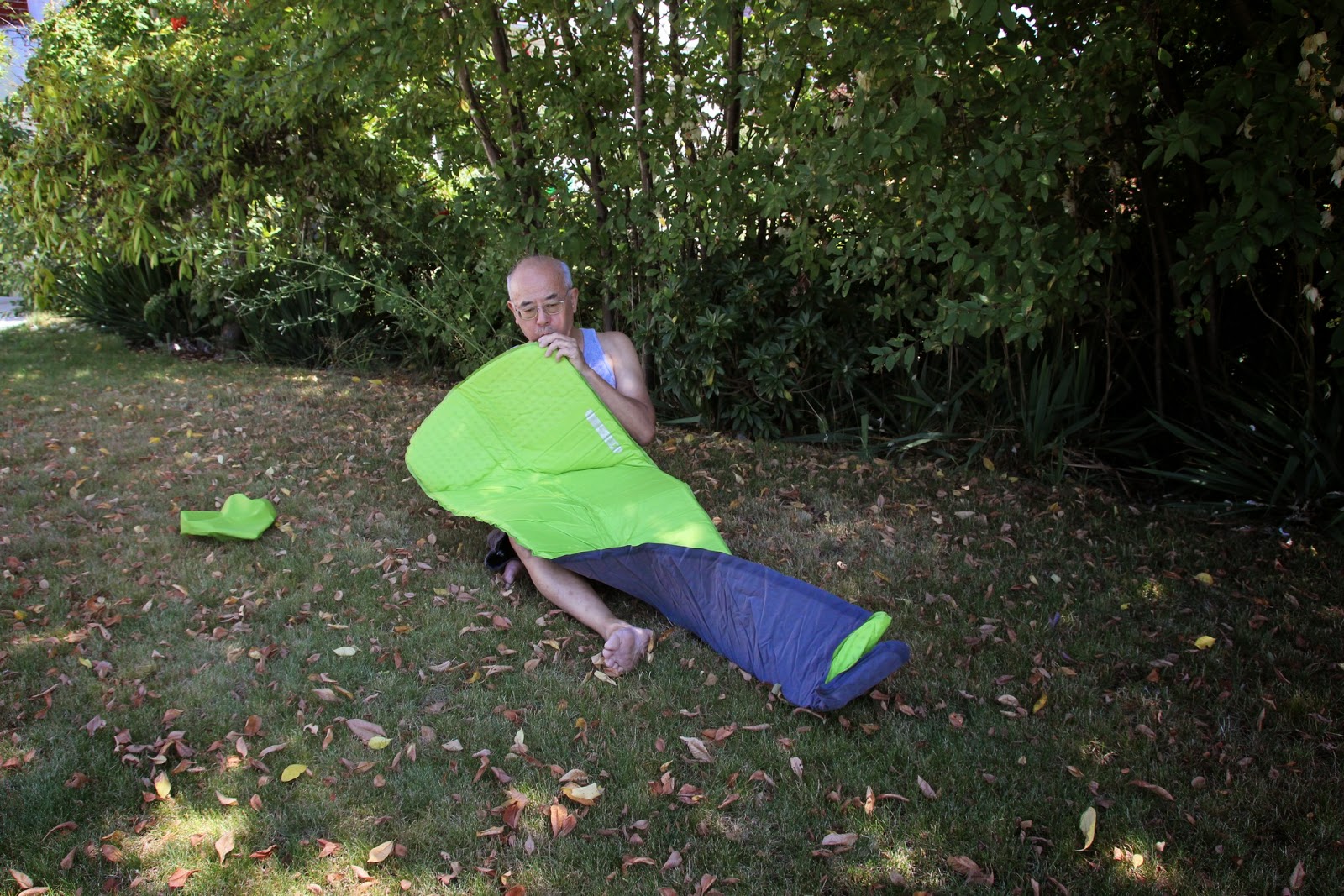 Now,  I am not a large person but the pad seems "just" adequate for size.   I found that you have to centre yourself on the pad and hope that you stay on top of it,  especially if the ground is not flat.  Once I was on an incline and I found myself slipping off 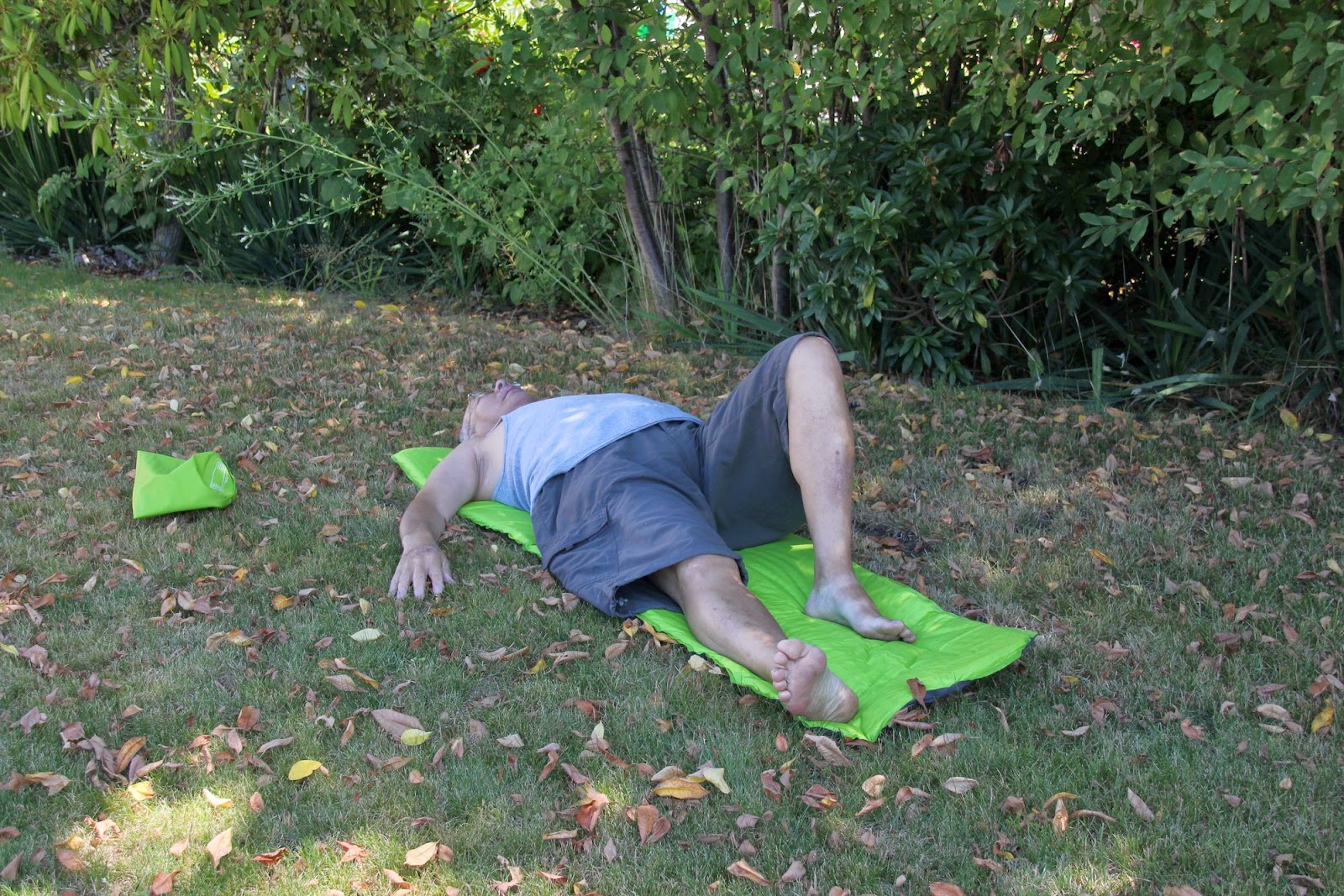 I have to make sure that my head is still "on" the Pad and then the rest falls into place.  Not much roll over room though.   I like the way it packs into a small package as you don't have a lot of extra room on your motorcycle.   I put it into my Dry Sack and Rok Strap it to my rear seat 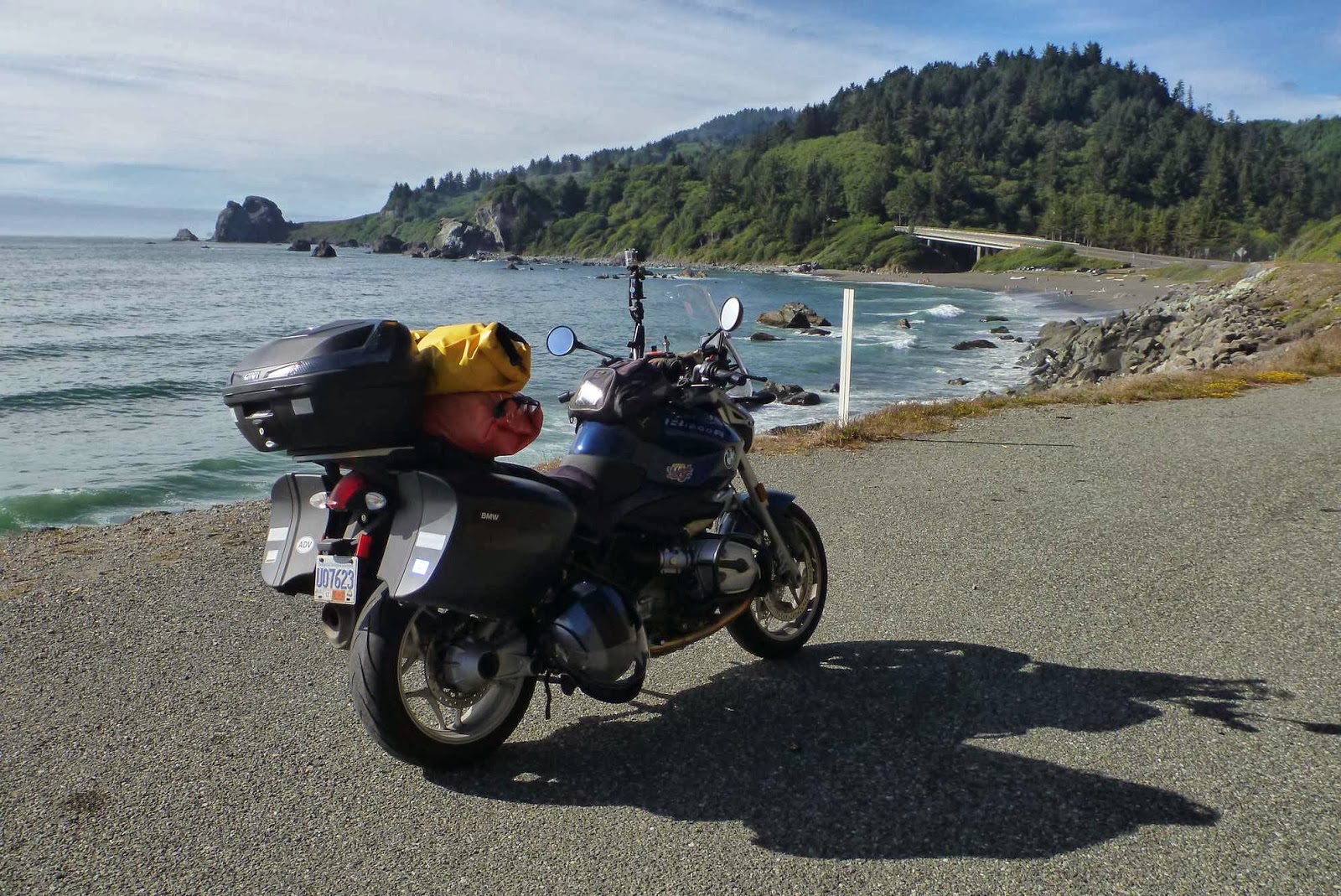 My trip last year was a test to see if I could endure multi week travel on my motorcycle.  I had never camped before 2012 and that was the year that I bought my first tent, sleeping bag, air pad and made my way to Baker City, OR for our iMBC2012 International Moto-Bloggers Convention to Hell's Canyon 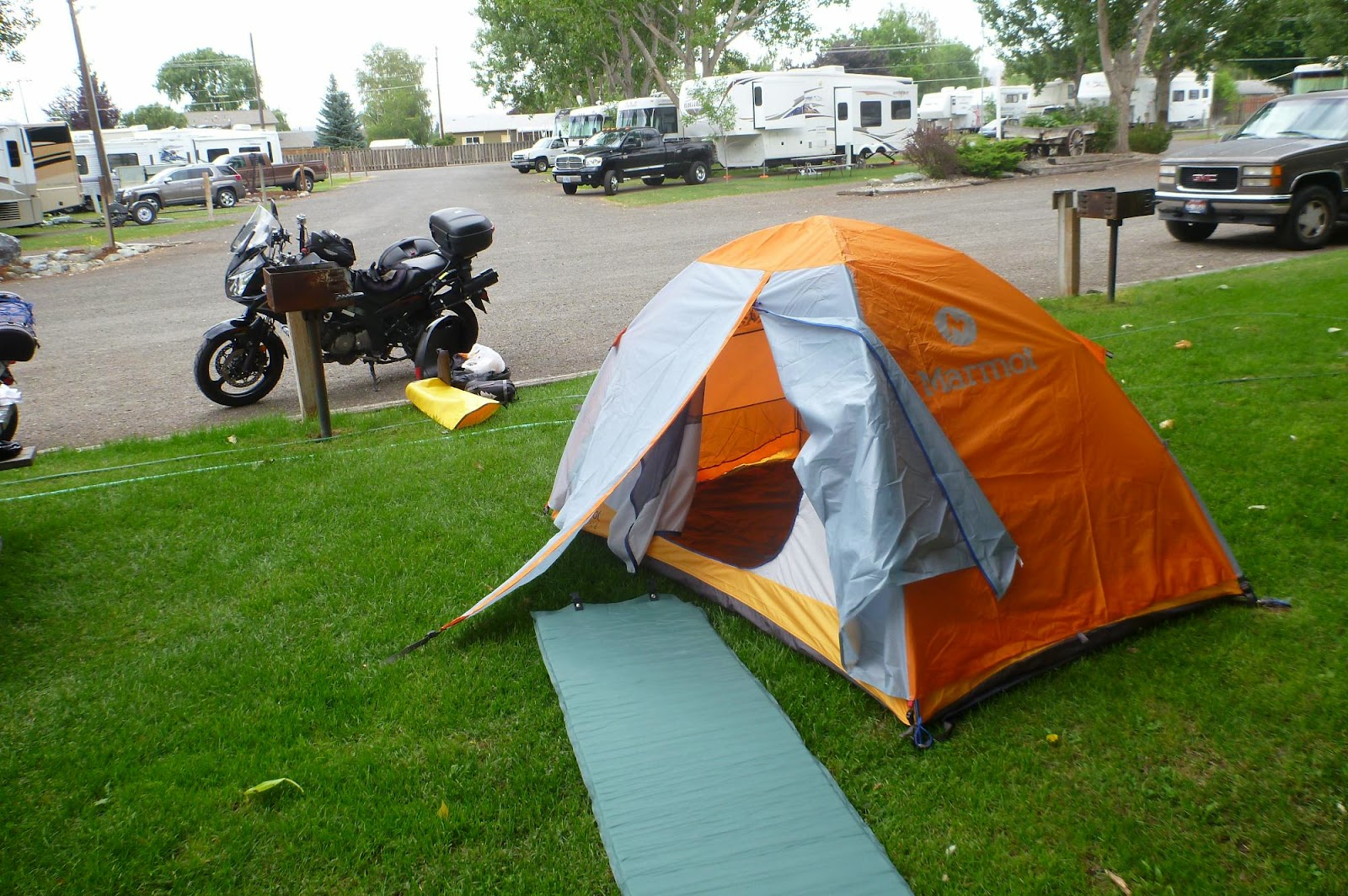 Here I look like a seasoned camper, but I'll never forget my first time . . .  I had a nice looking neighbour too 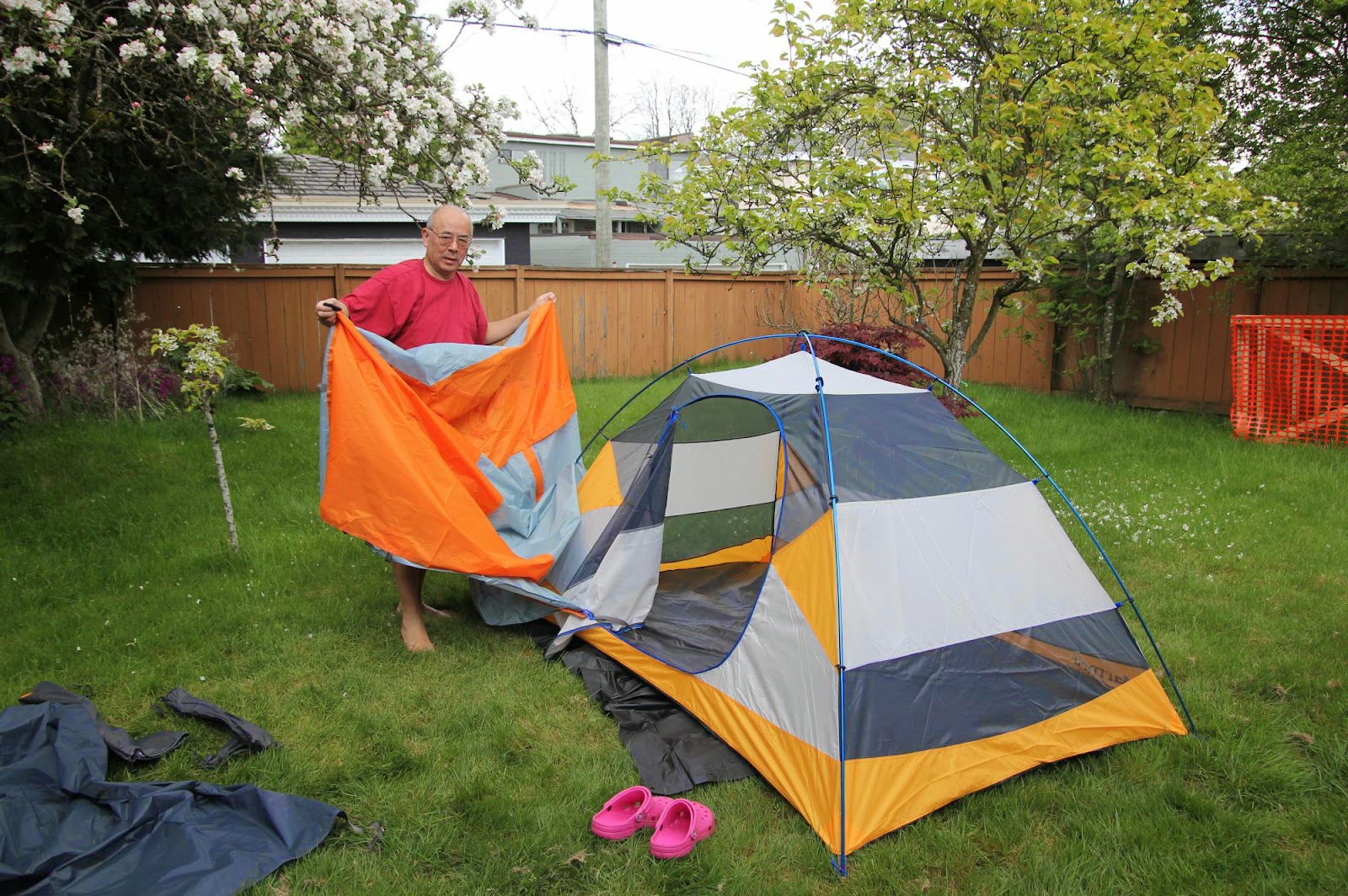 Hard to believe that just a mere couple of months earlier,  I was struggling to figure out how all these parts went together.    Anyway after we left Bend, OR and I headed to a new campsite in Lincoln City, OR I nearly froze in my compact sleeping bag.     When I got home I upgraded my sleeping bag to one that can go down to 20F.   That's also when I upgraded my air pad to the MEC Reactor 3.8

I am always on the lookout to upgrade my camping equipment so I will be ready for my next trip.  As with most of you, my equipment is always evolving.  It's a question of value for money.  I don't need the best but often the more expensive is cheaper in the long run.  Cheap often falls apart.

I often peruse the Craigslist ads and I came across a "deal", so I made contact and brought home 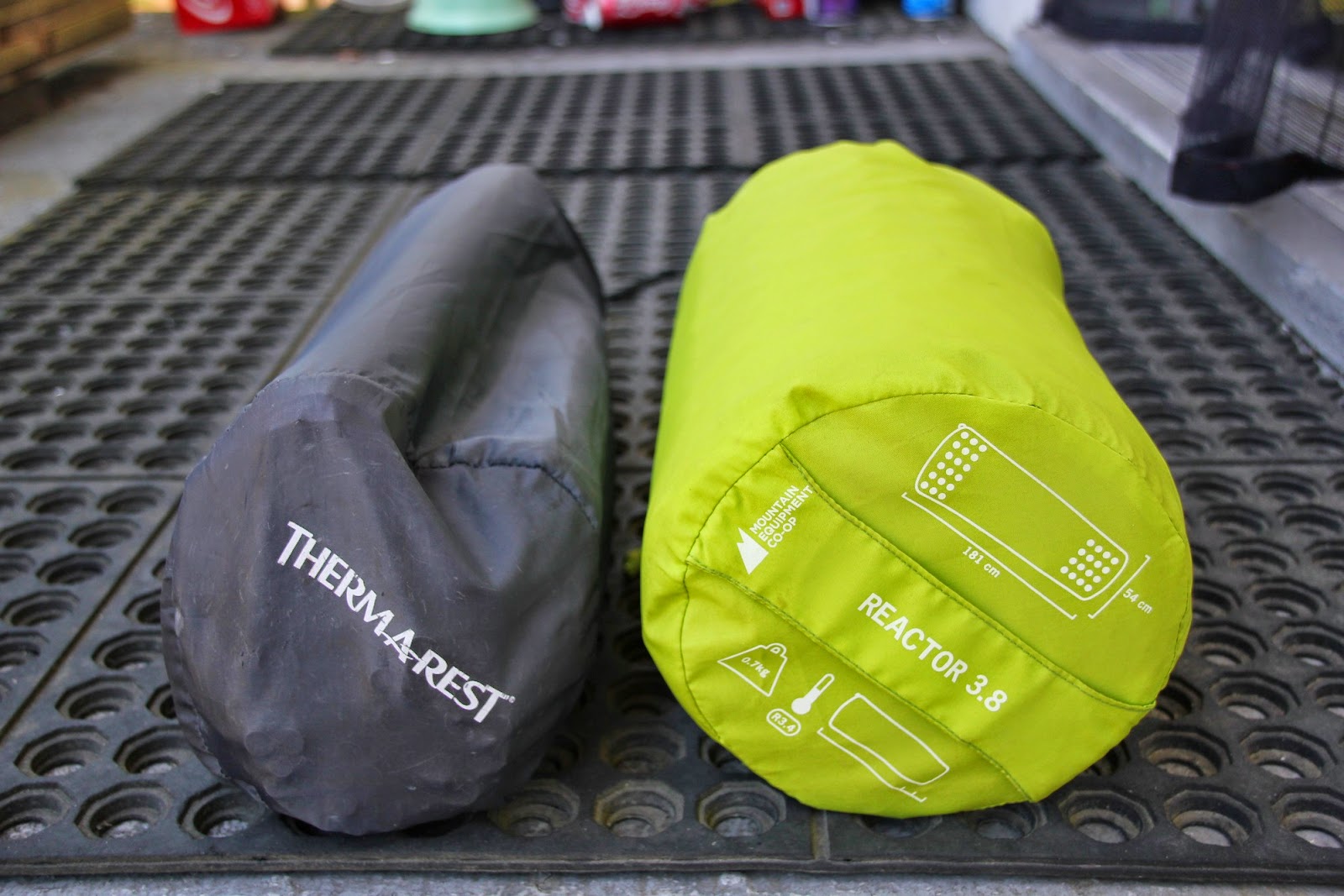 a Therm-A-Rest  LuxuryLite "take apart" folding cot  (info here)    As compared to my MEC: Reactor 3.8 it packs down to a bit longer but skinner than the air pad 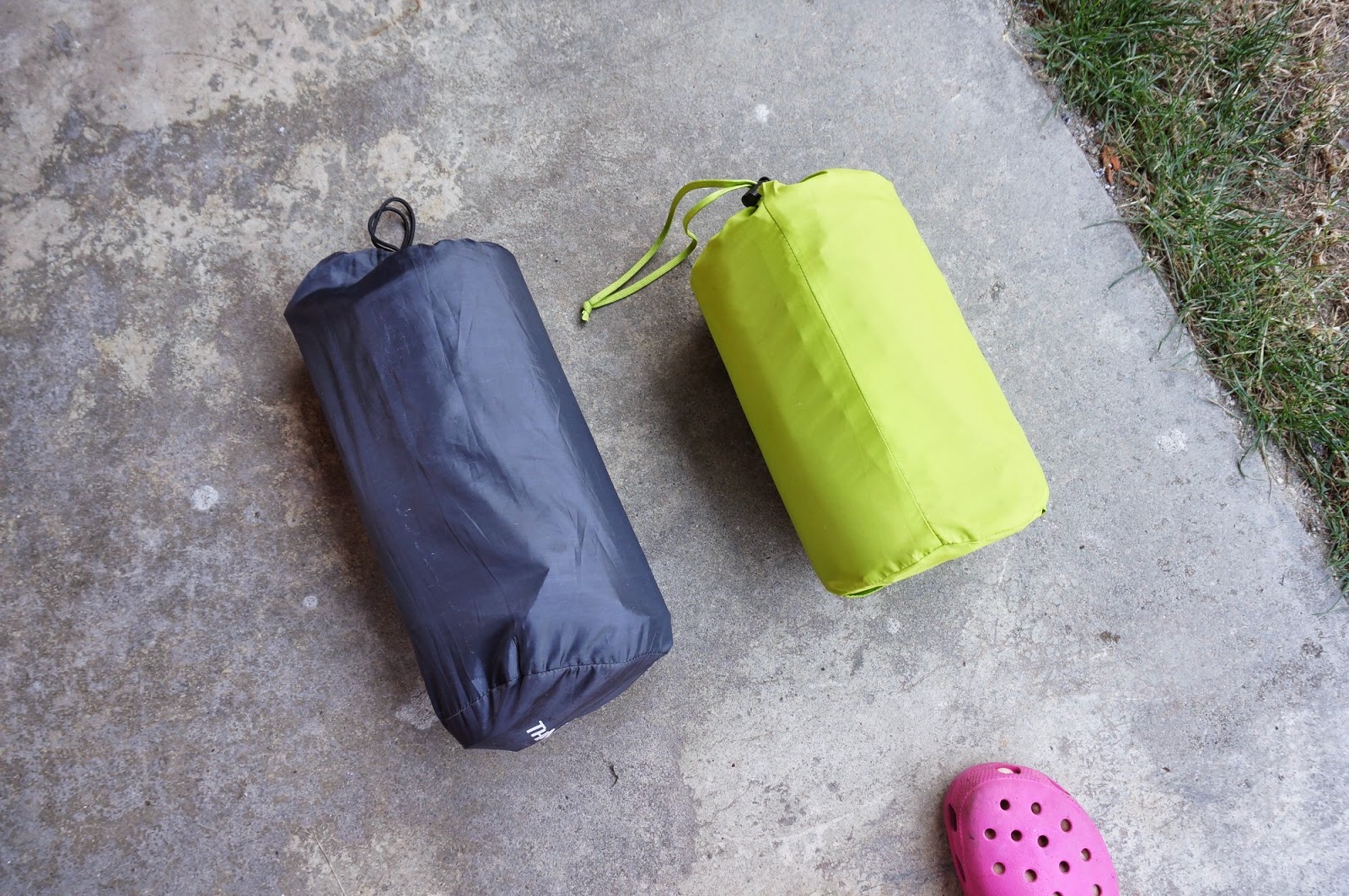 Hard to say which one I would bring on a trip, based upon packed size 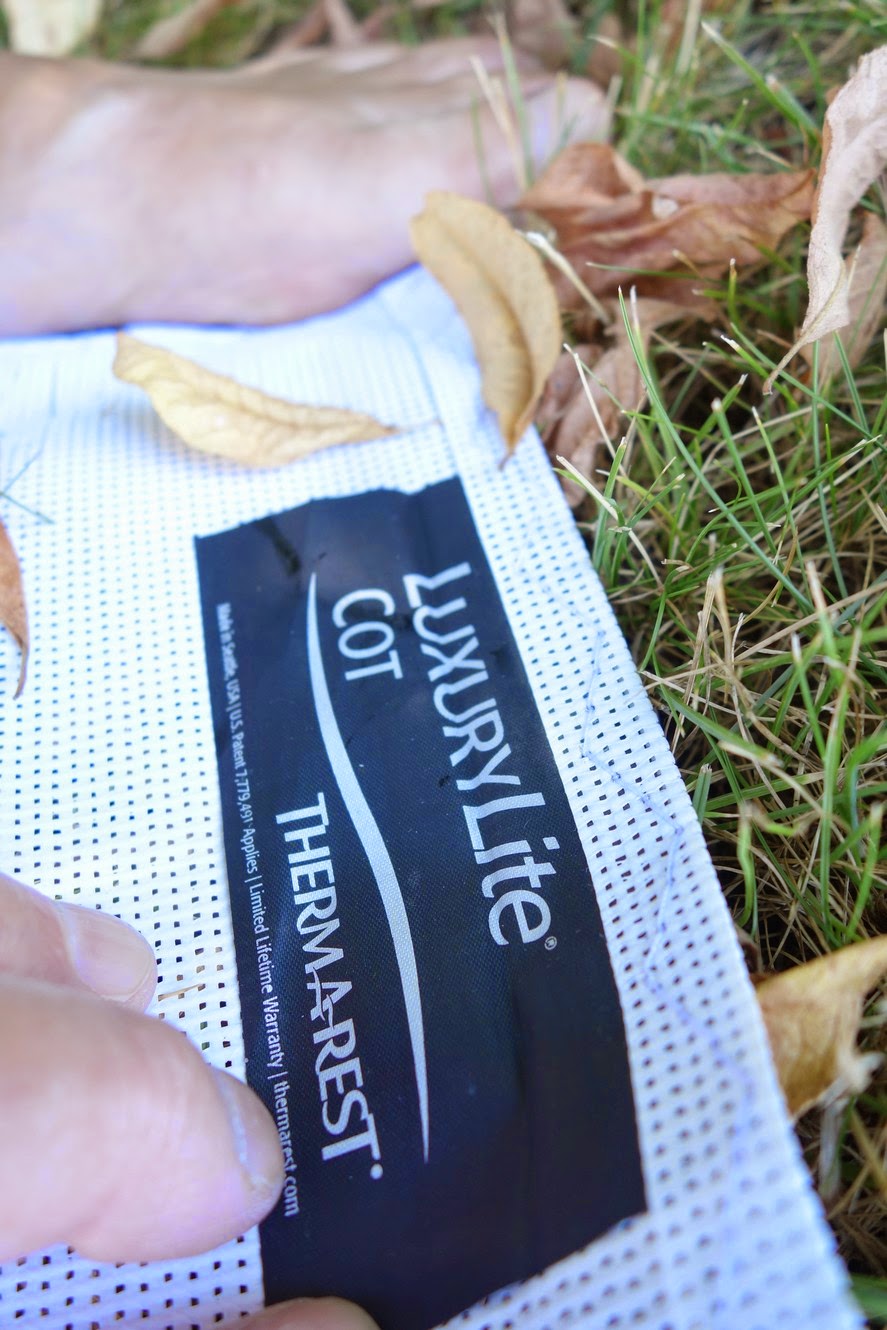 I didn't get any instructions so I dug right in and spread out the pieces.   The seller told me to twist the tubes for added strength so luckily I knew about that 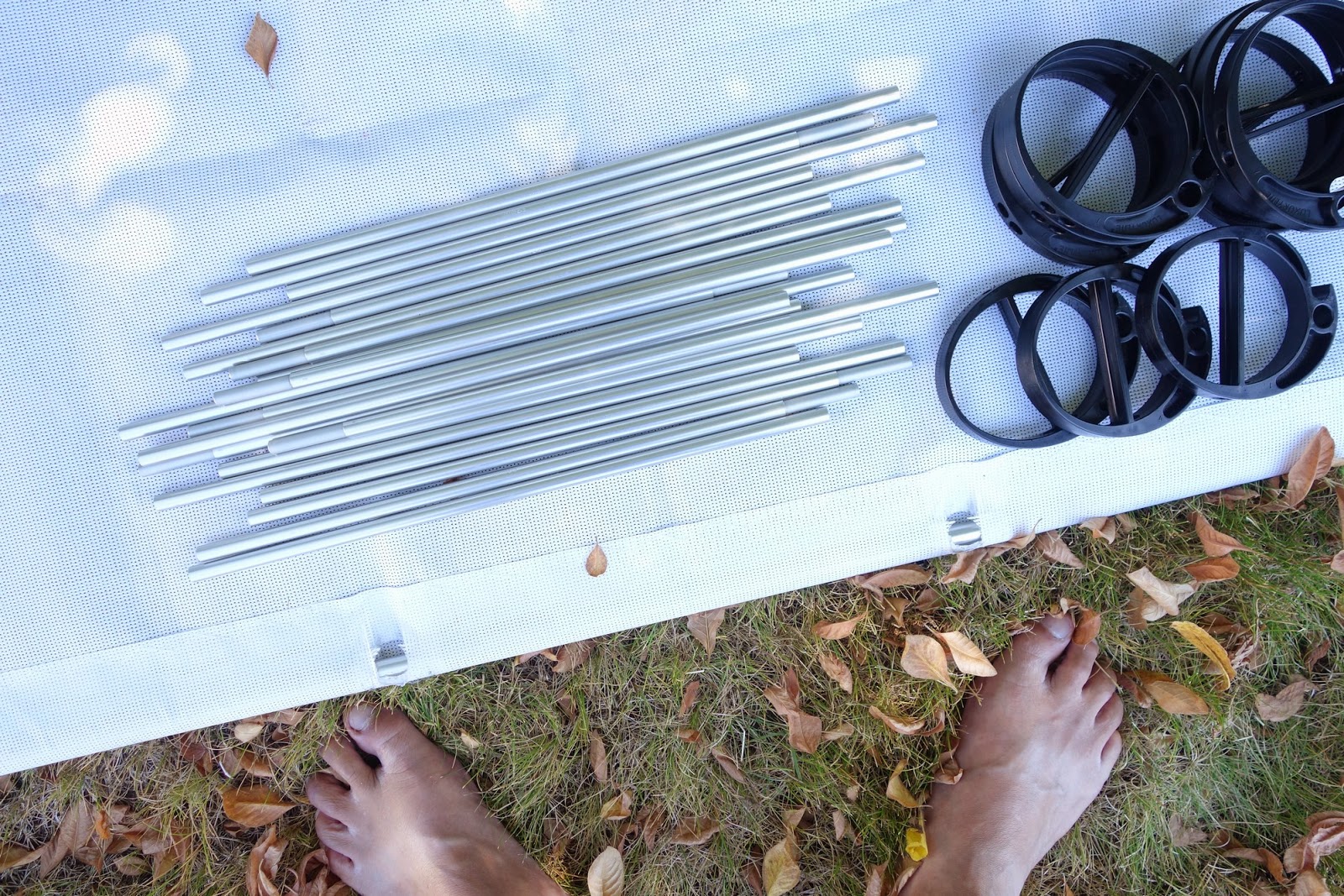 Here we are, the tubes (cross pieces) come in 2 sections and are attached to those round "feet" 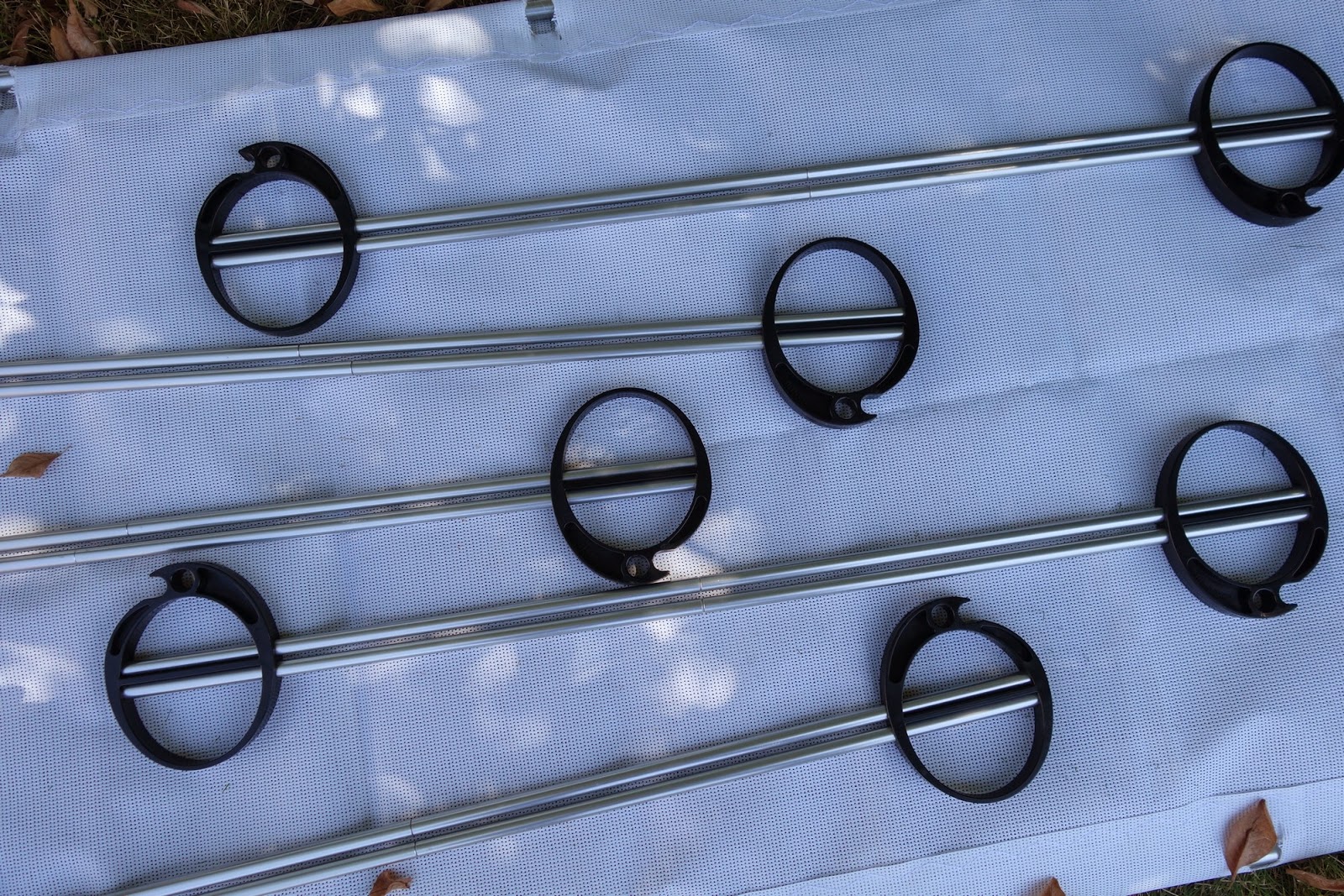 There are two tubes per set and notice they are 180 degrees offset to each other, so you twist them when you attach so they are in the same orientation

There are also two larger diameter aluminum poles which slide into the fabric of the cot, lengthwise.  These two sections are shock corded so they go together very easily 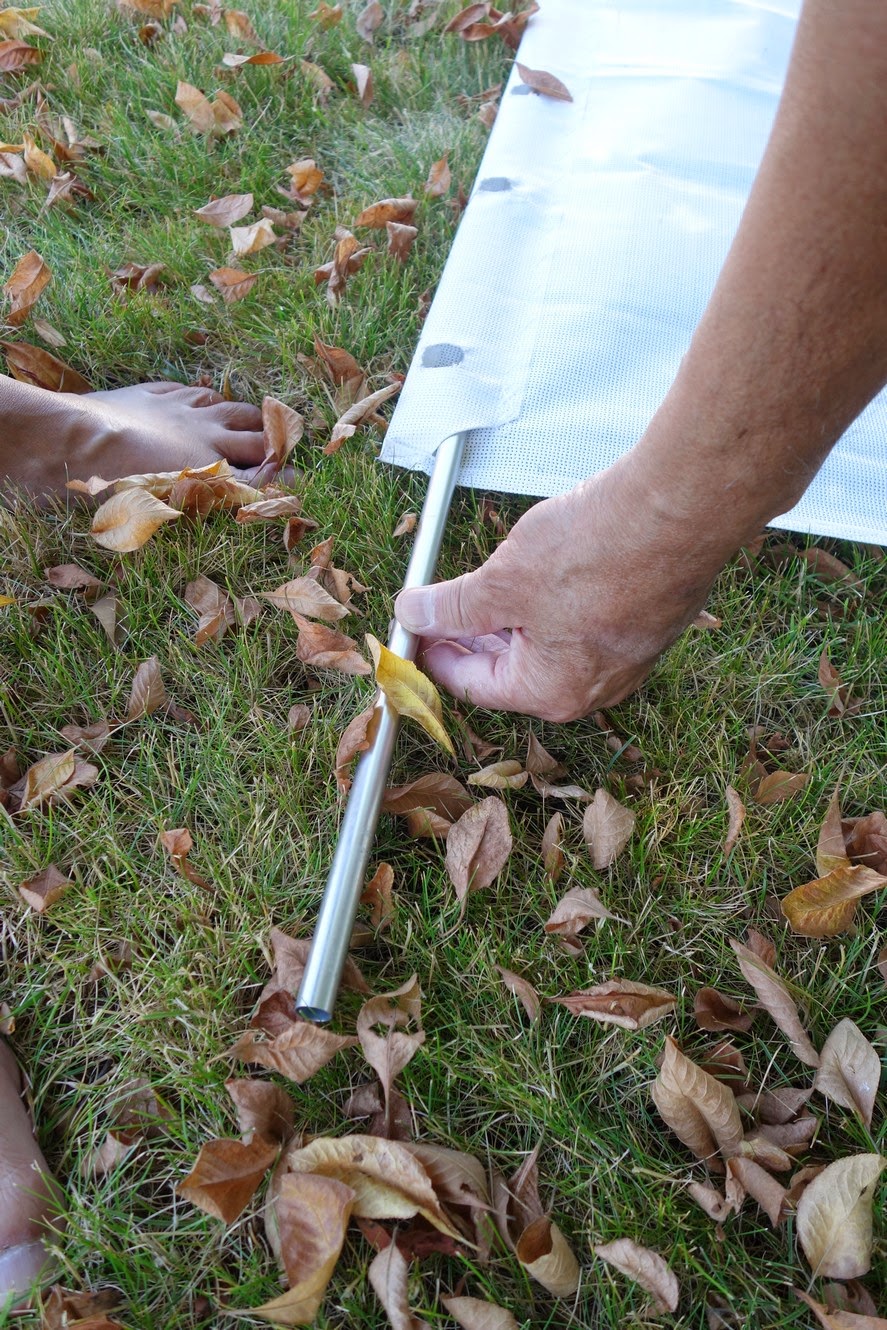 and you slide them into pockets on both sides, which create the sides/frame of your cot 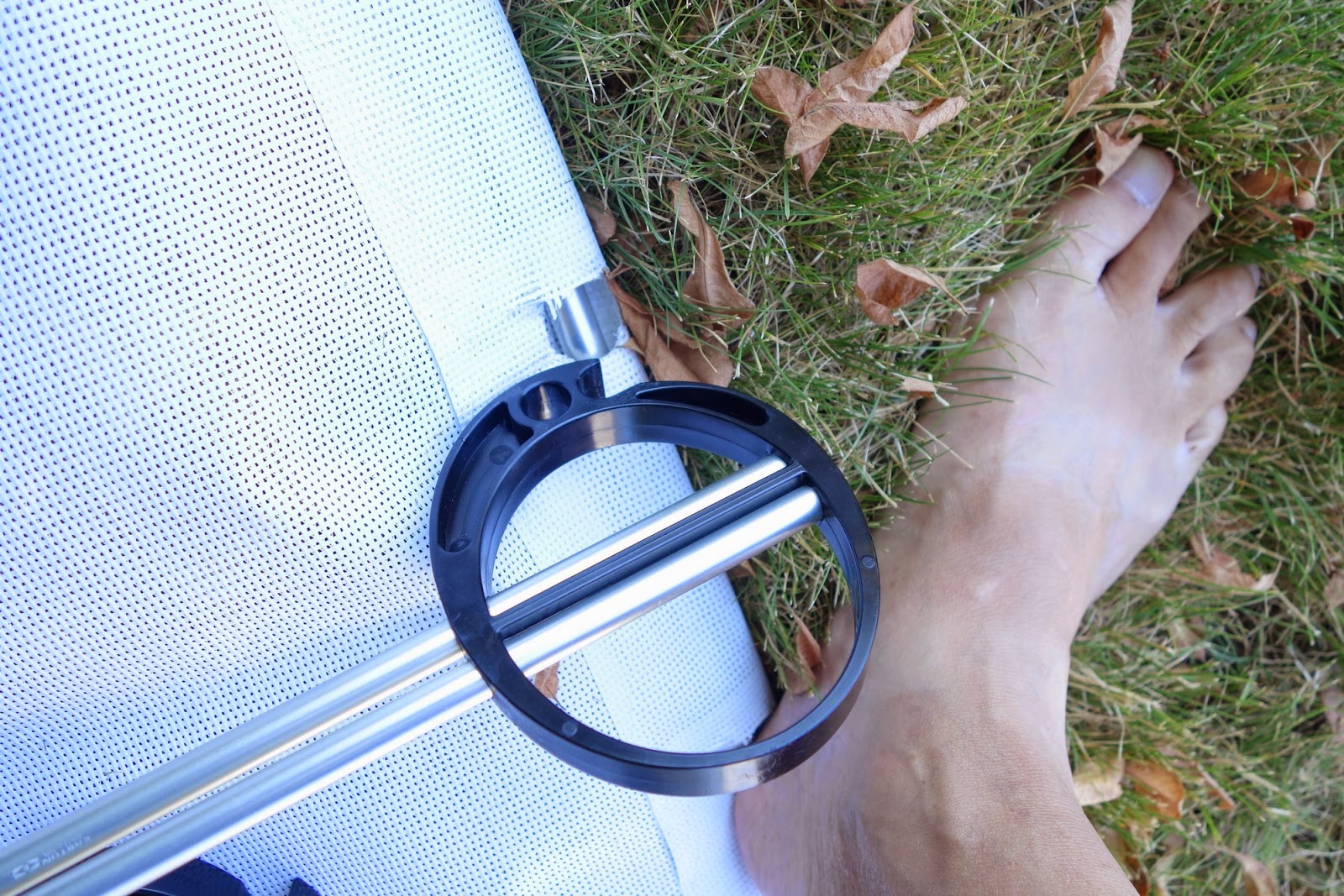 I decided to hook the left side of the crossmember onto the frame, then twist the right one onto the tube.  This is easier to do than to explain.  I found that with the pressure required, it is easier to stand on the frame to hold it in place 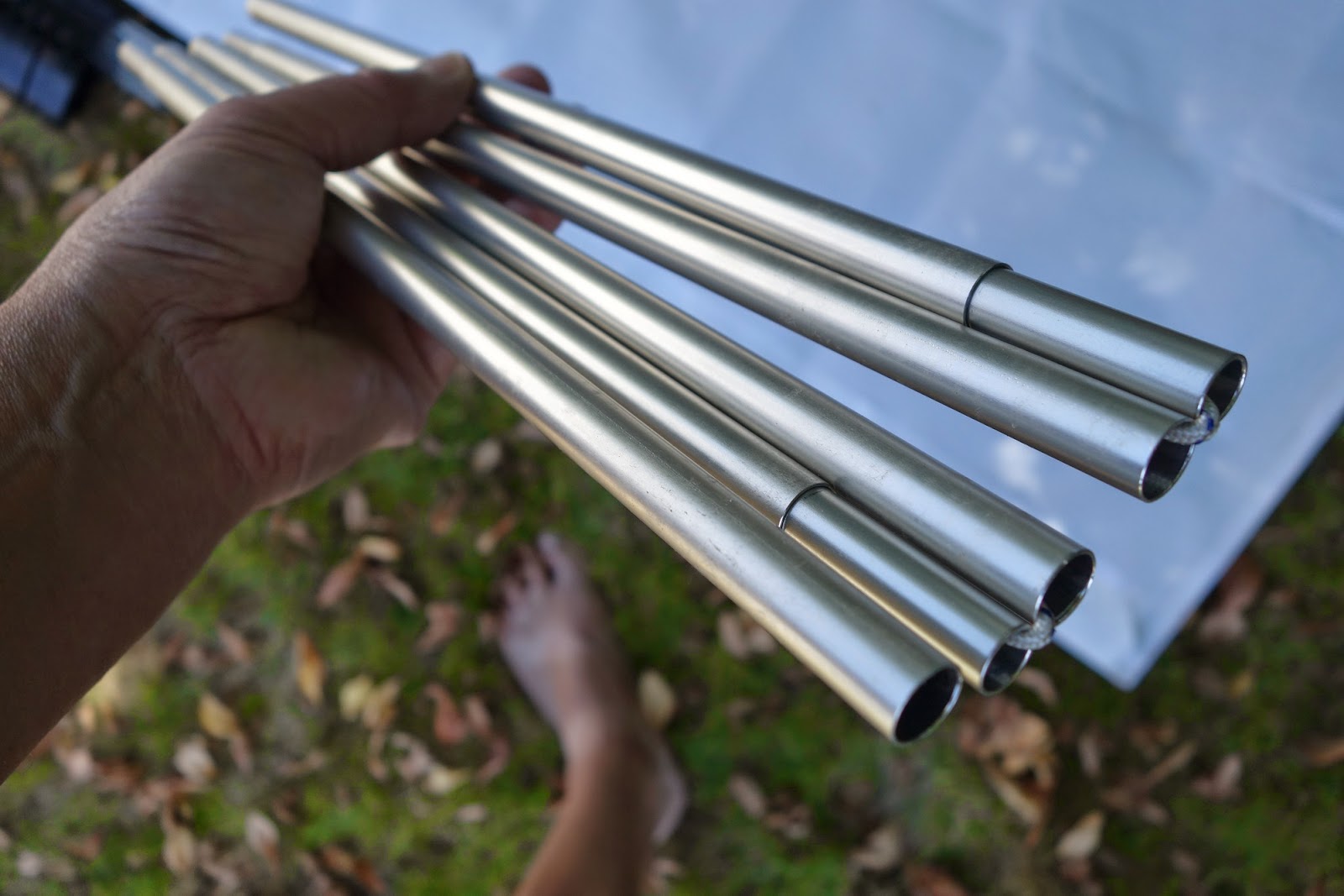 Here's a close up view of the cross pieces.   They resemble tent poles, but much shorter 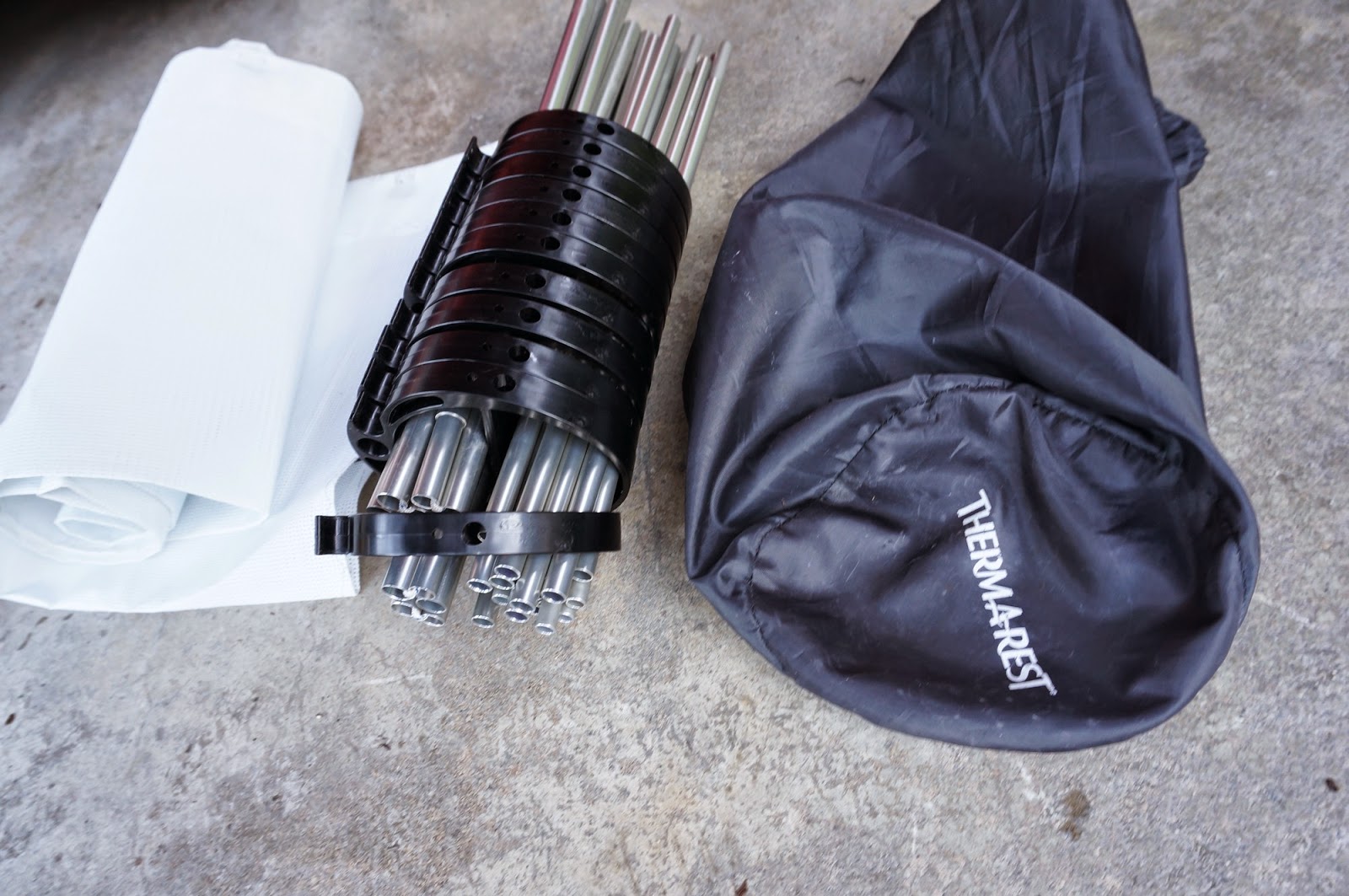 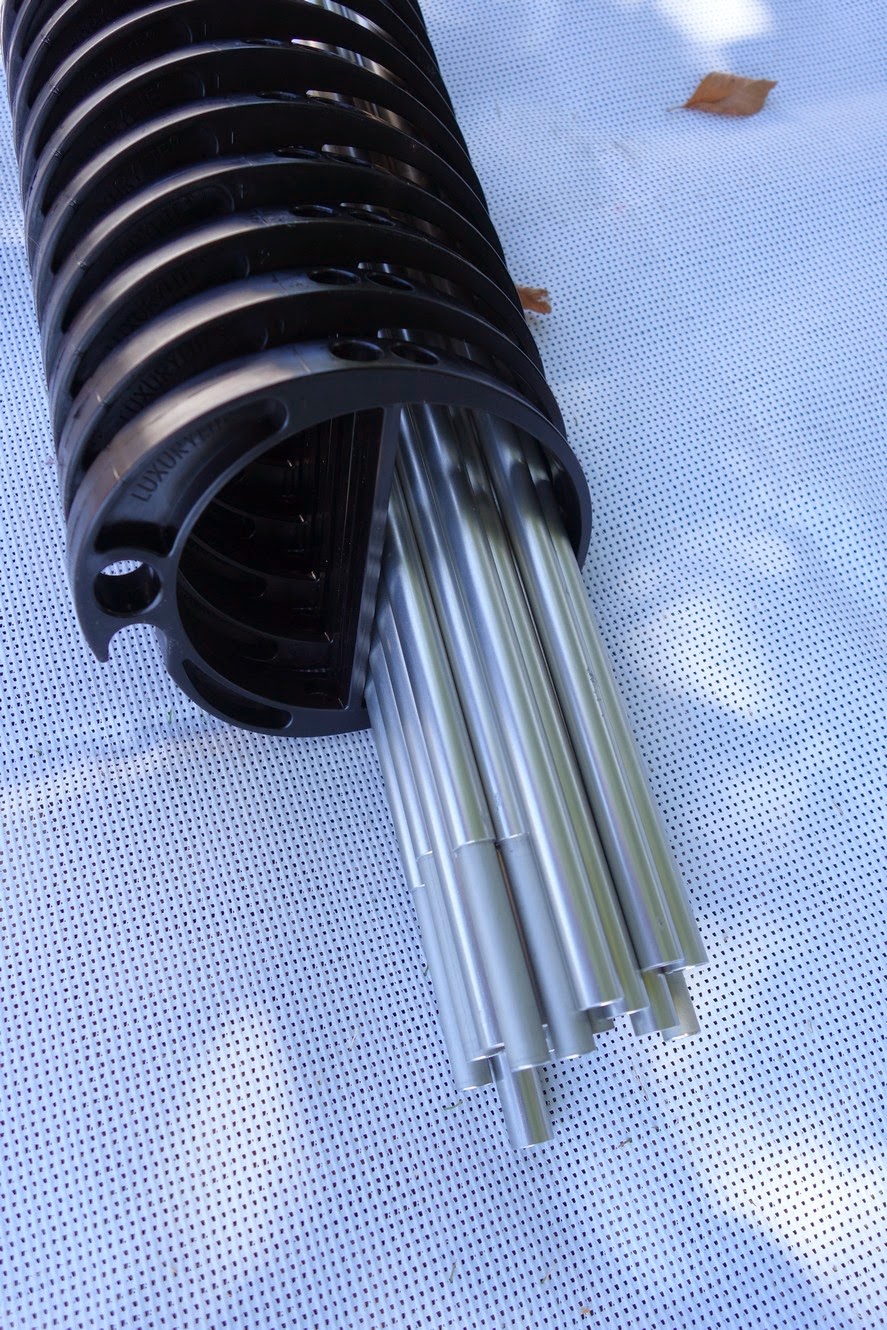 When you take apart your cot, the "feet" can also hold the aluminum tube pieces.   Crossmembers on one side, and the cot rails on the other 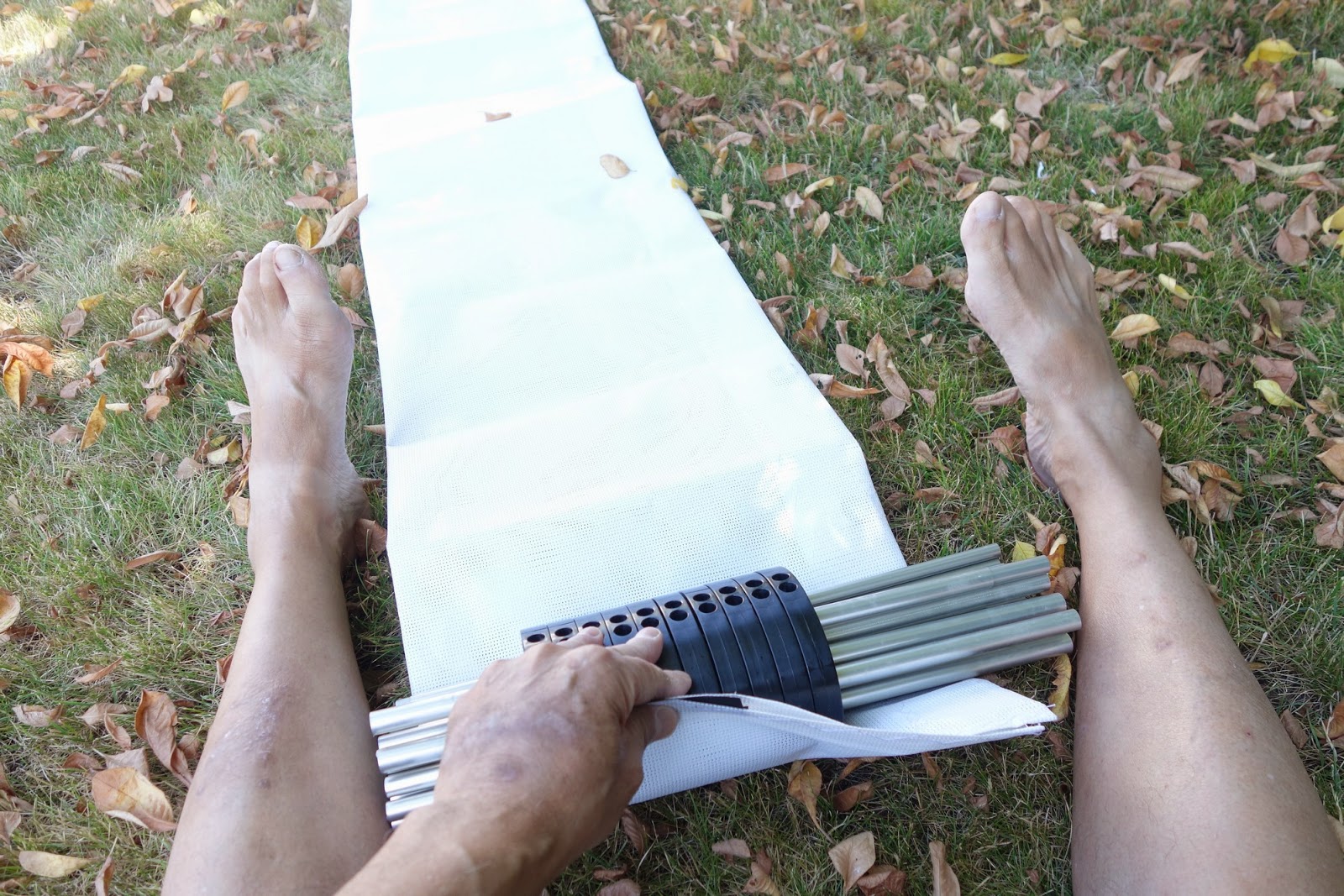 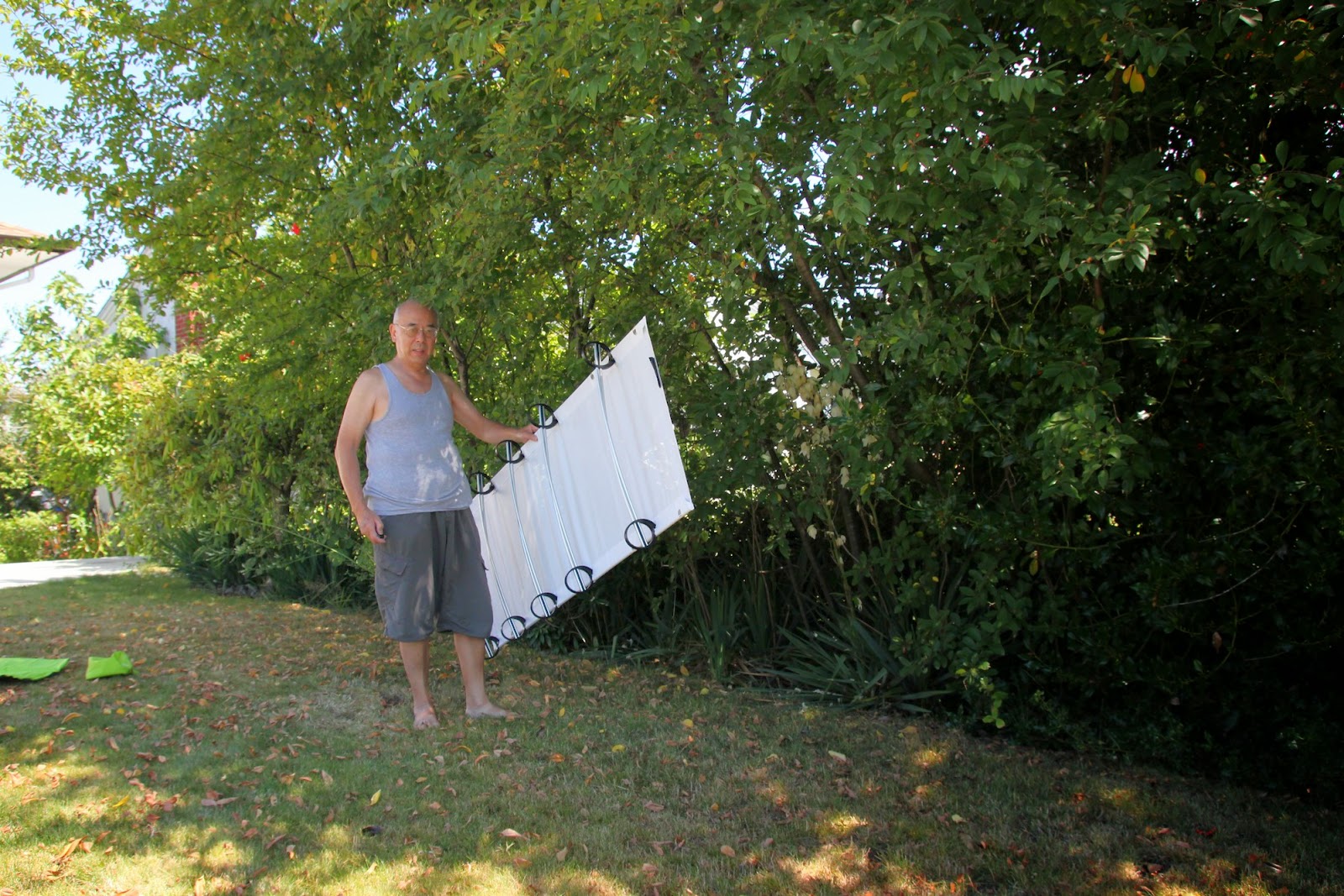 The cot works great on uneven ground, and you don't have to worry about bugs or crawly things 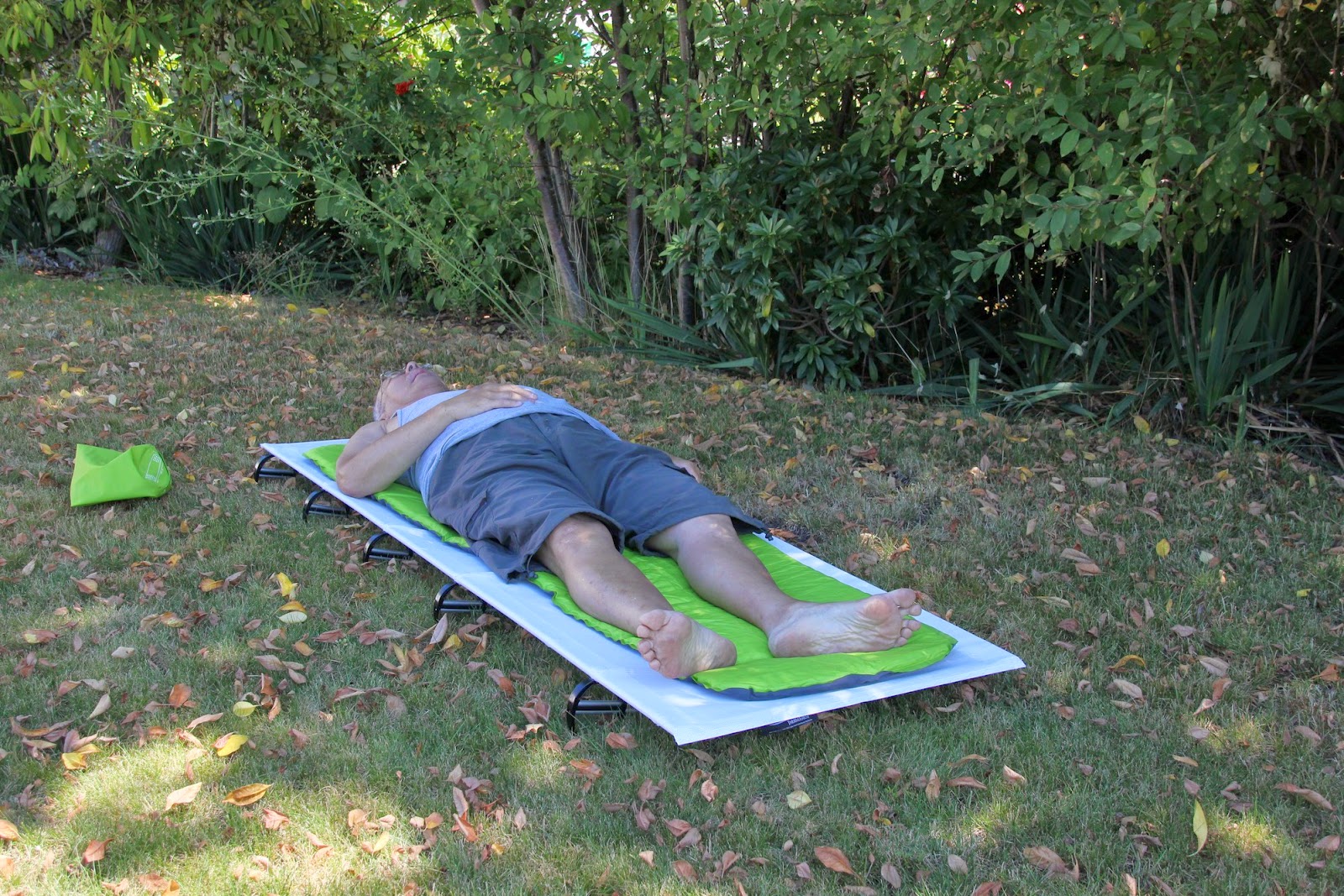 The side rails seems to make the cot much stronger, and there is air circulation for those hot summer days.   Maybe not so good during cooler weather.  I found the air pad a bit sticky in hot weather 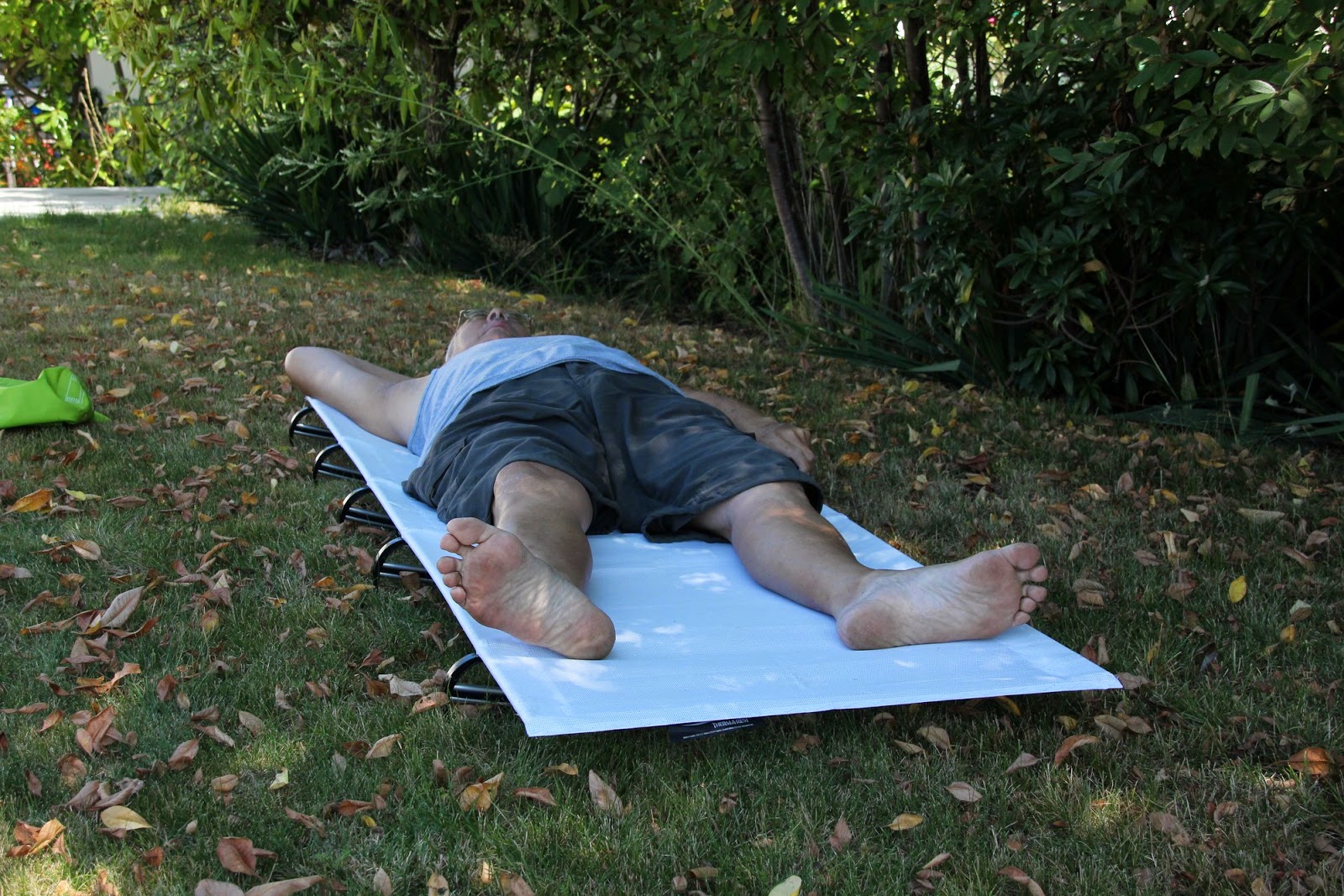 The cot has lots of room to move around, nearly like sleeping on a real bed.  You also don't get the dampness of the ground 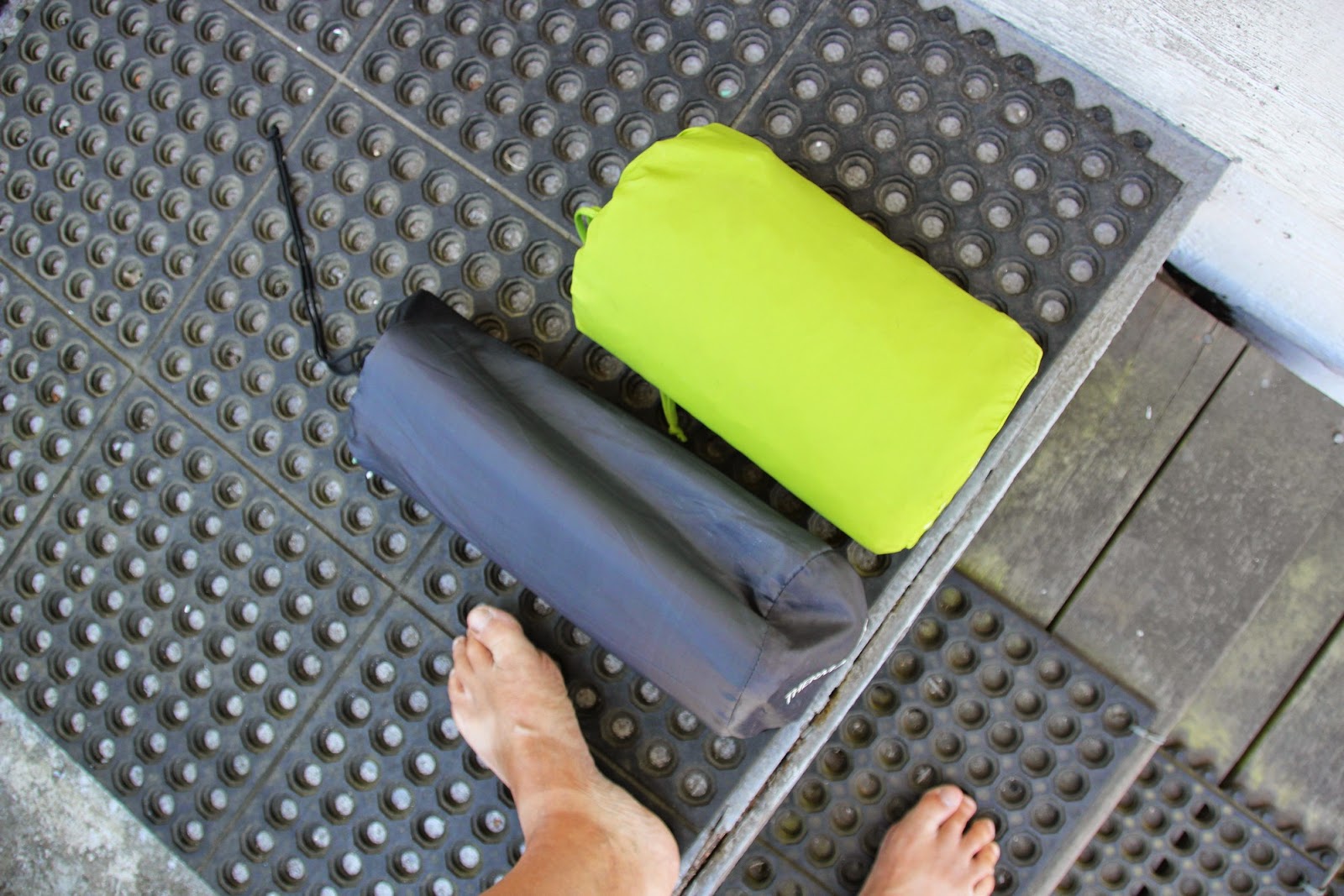 Hard to say which one I would pack on a trip but I have read many reports that the LuxuryLite cot can cure backaches, especially after a long day of riding your motorcycle