Being a guest at Ed & Dianne's for a couple of days had made me spoiled but I had to start my trek home.  I still had a long way to go but which route should I take.  We looked at some maps and I considered the Canadian route but when Ed mentioned he had to return his riding boots and I also wanted to visit some cousins in London, so we headed East on Hwy 401 where we parted ways at this rest stop 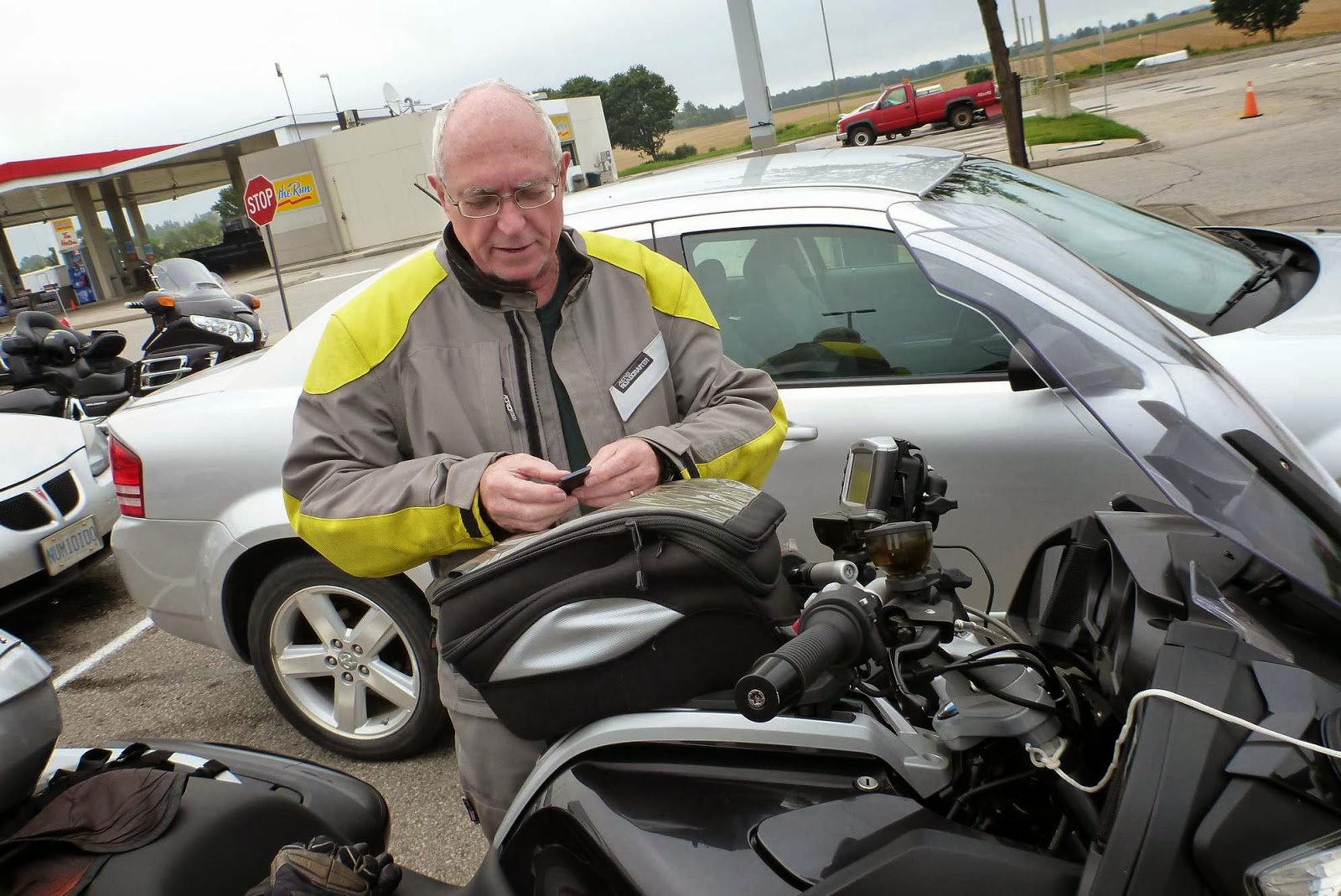 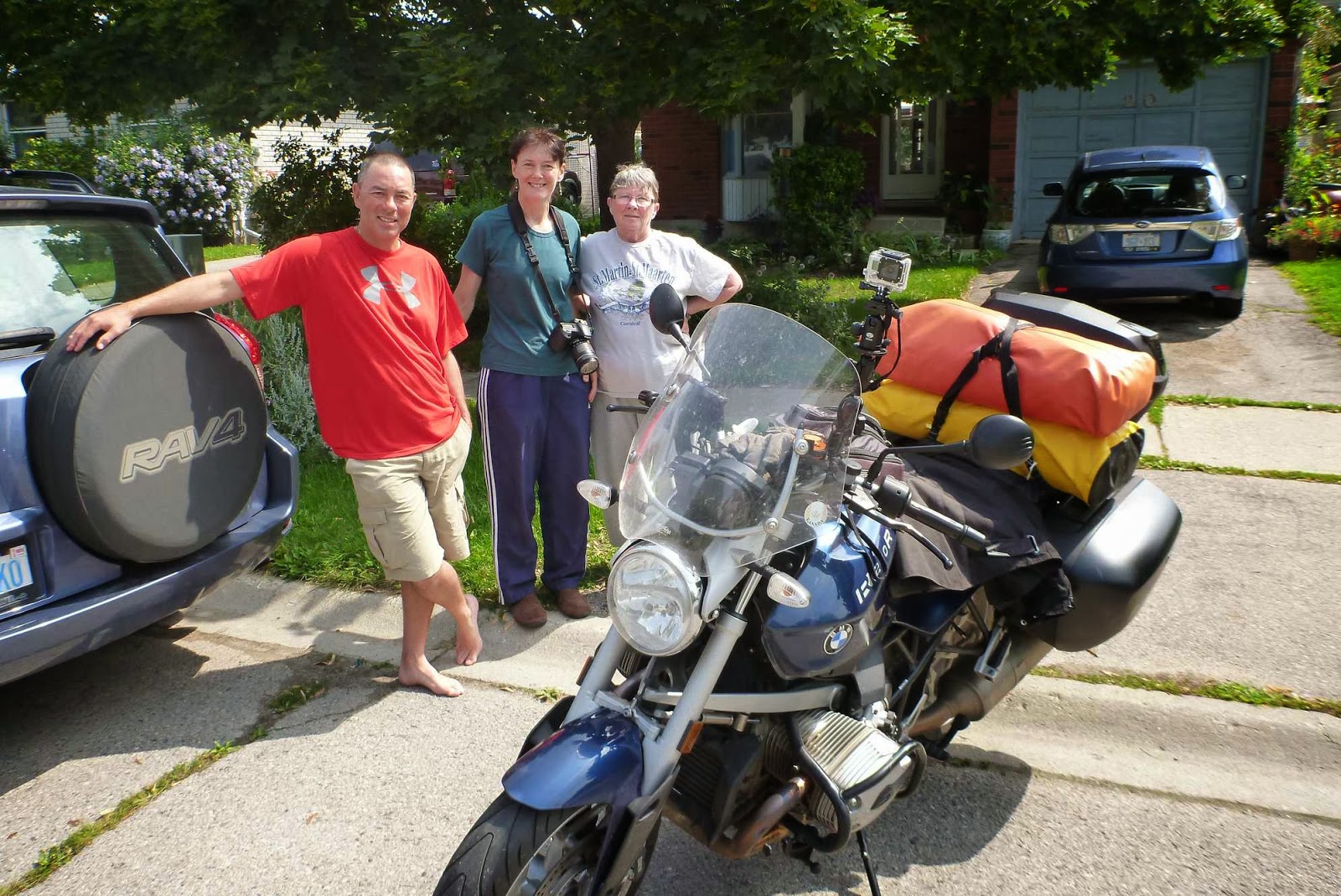 You know how it goes.  You plan to stay an hour but you keep talking and soon it's over 2 hours.   Cousin Sarah is into photography too and belongs to the local camera club.   She snapped a few of me and I snapped back.    I was soon back on the road 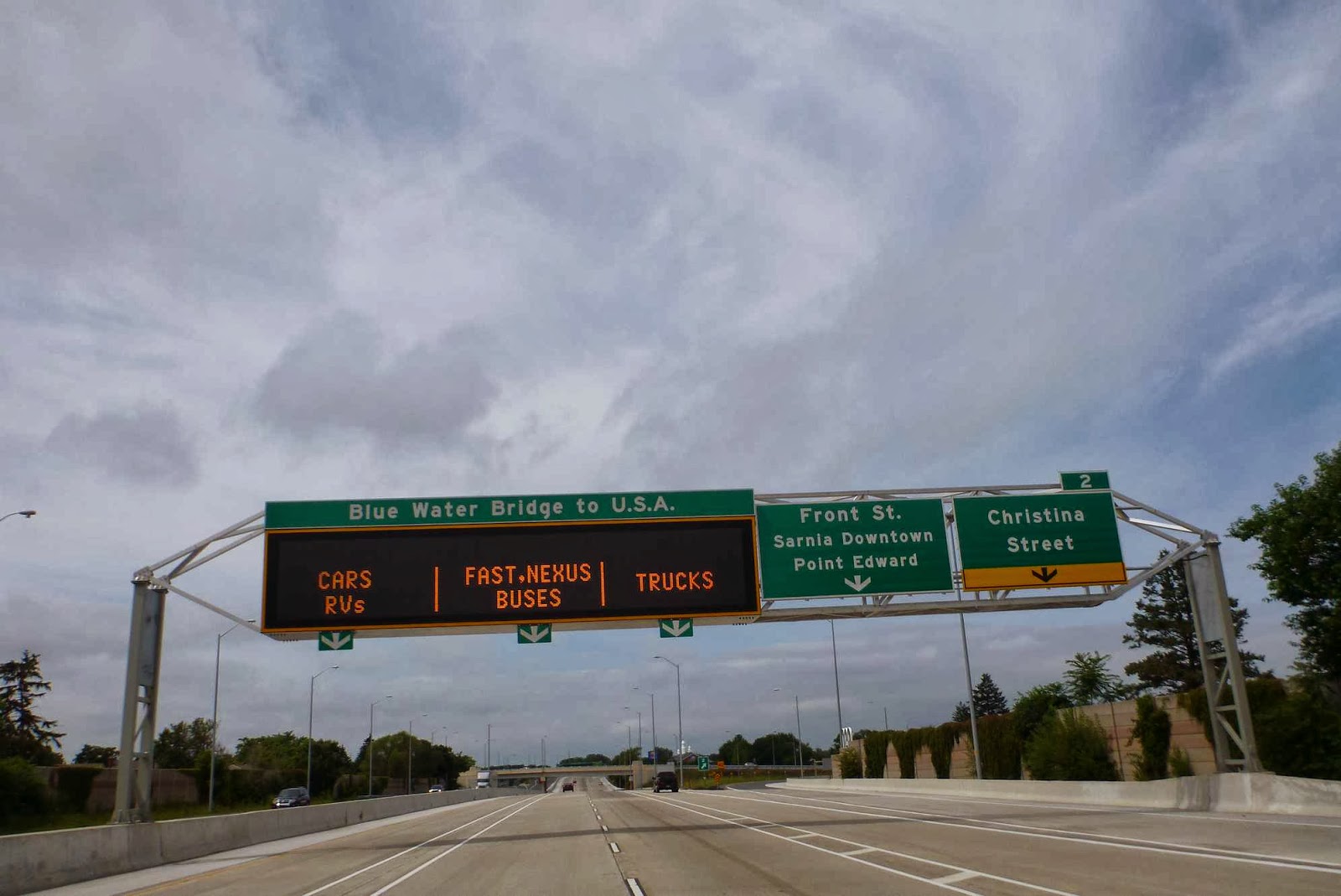 and decided to re-enter the USA through Sarnia,  Over the Blue Water Bridge.    I had been over this bridge before but many years ago in our rented car back around 1973 when we visited my Uncle in Detroit 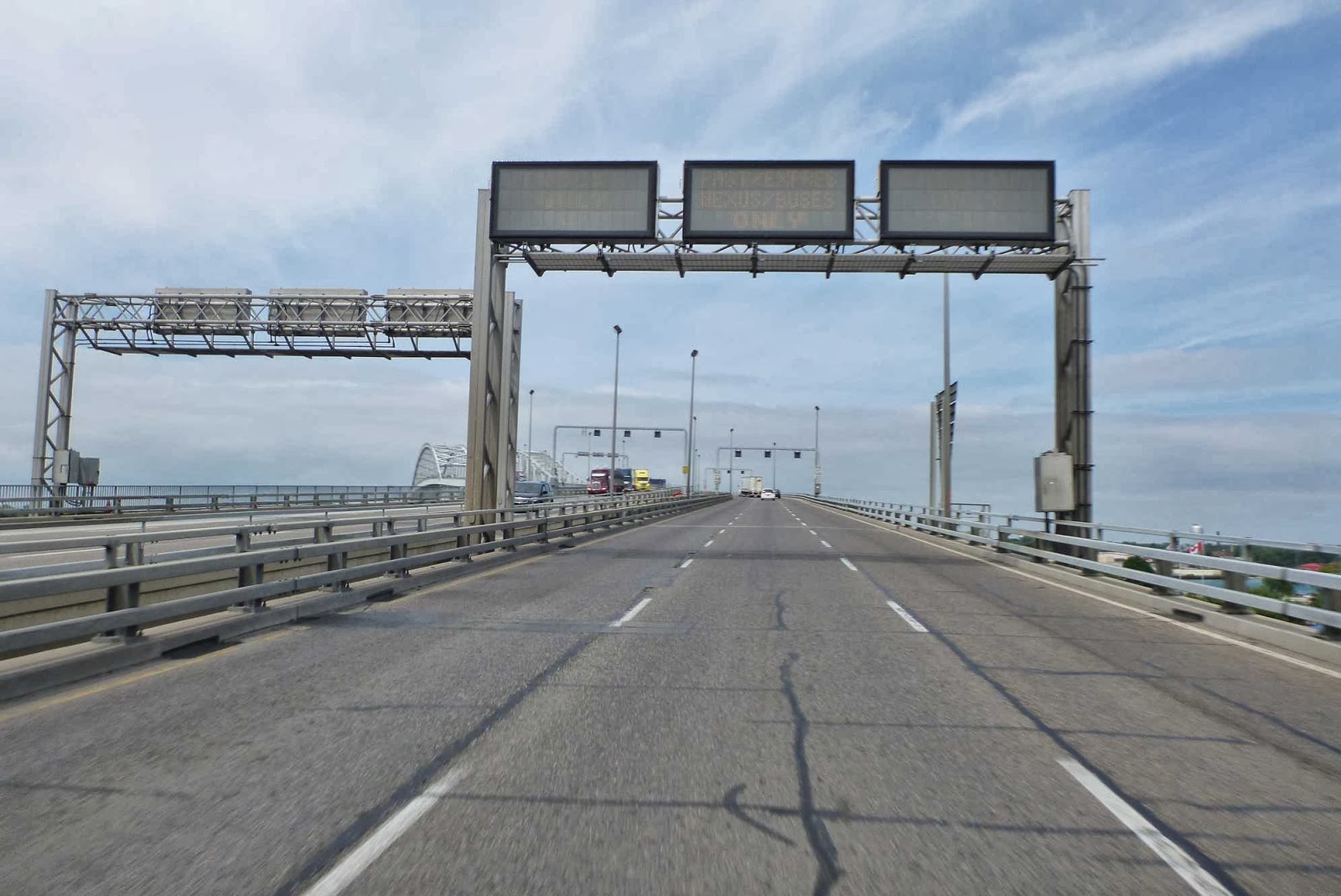 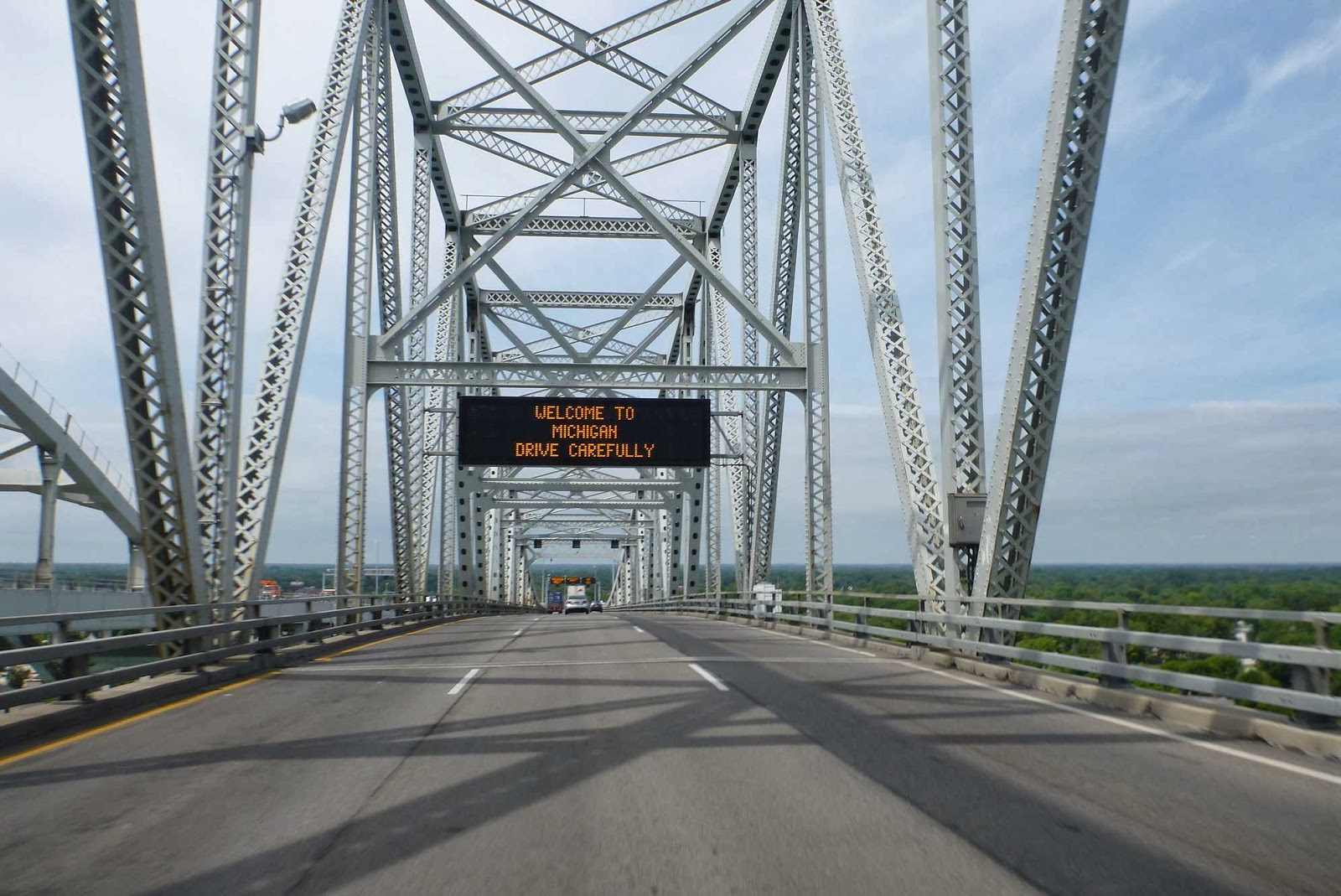 Welcome to Michigan coming up and I have to turn my cameras off before I hit the customs booth.  They actually asked me about it when I was being questioned

After I crossed the border the highway splits South and West and I was not familiar with the names of the towns so I kept to the left which was a big mistake.   I didn't know it but I was heading straight into Detroit and my plan was to go around.  I got lost and exited the freeway and tried to find my bearings.   I couldn't figure it out because the road atlas I brought wasn't detailed enough and my GPS was too detailed and I couldn't find the names of the places on my paper map so I continued to ride in circles.   I thought that I could go into the McDonalds to use their WiFi on my phone but they didn't have WiFi.   Then I realized that the reason was they didn't want the wrong people hanging around so it was a warning to me to get out of there

I decided to make this an early day so I ended up in Columbia City, IN for a sit down dinner at a Chinese Restaurant 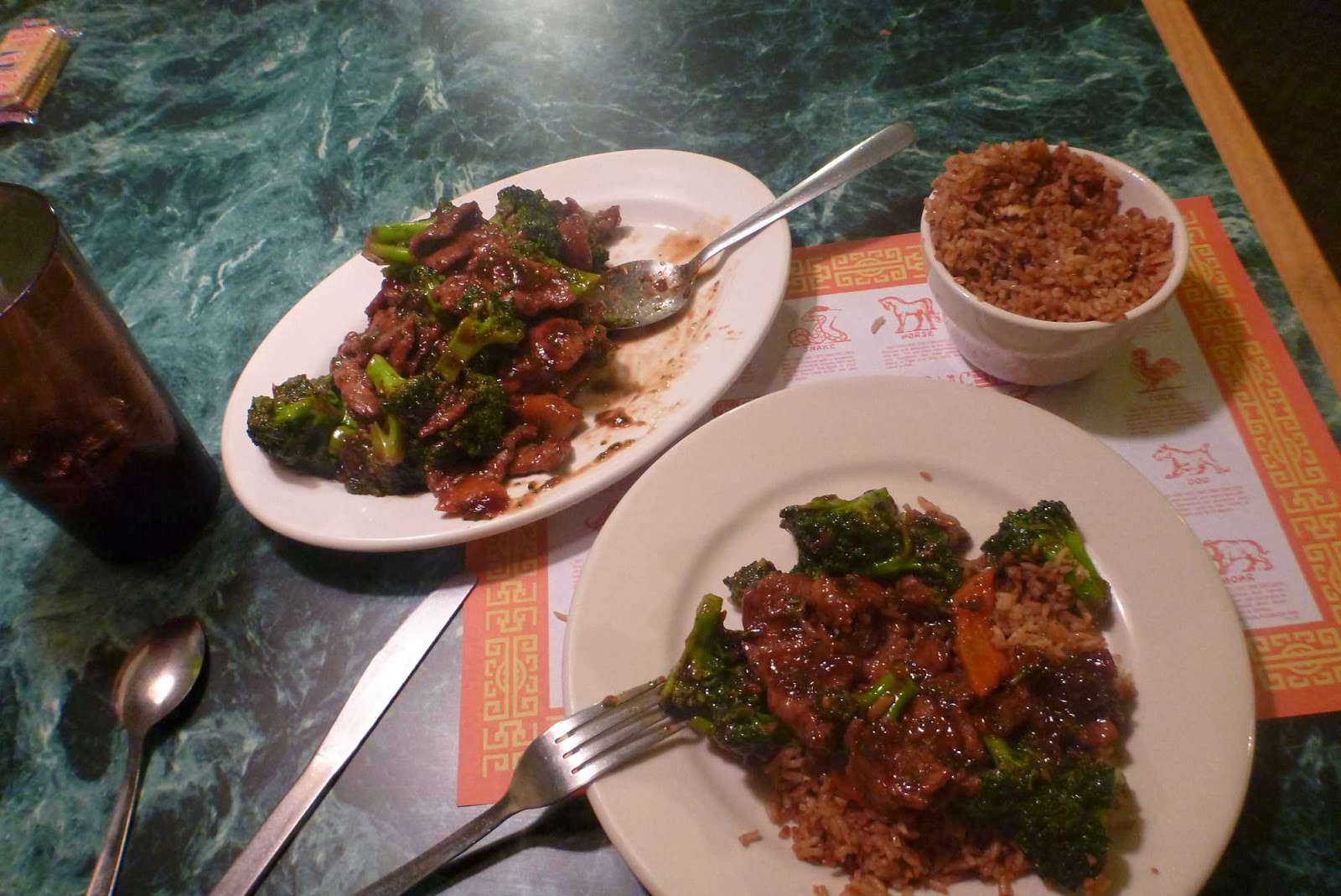 It wasn't so bad.  Broccoli & Beef with fried rice topped off with a fortune cookie.   With a full tummy now I had to find a home for the night.   I rode around and didn't see much.  Mostly run down motels so I decided to grap a marginal one right along side of the highway.   It was a seedy looking place where I had to talk through plexi-class and pay cash before I could get the key. 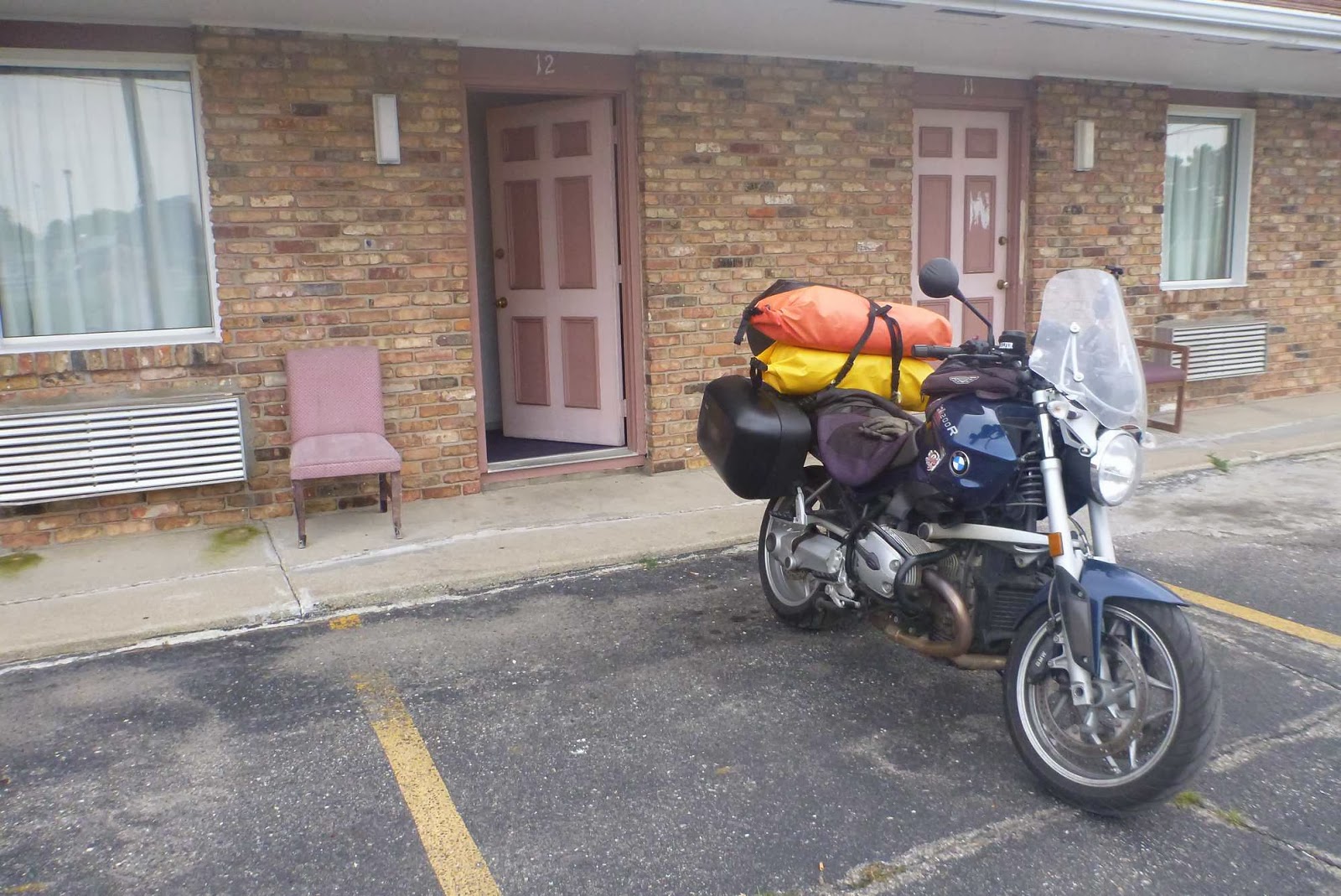 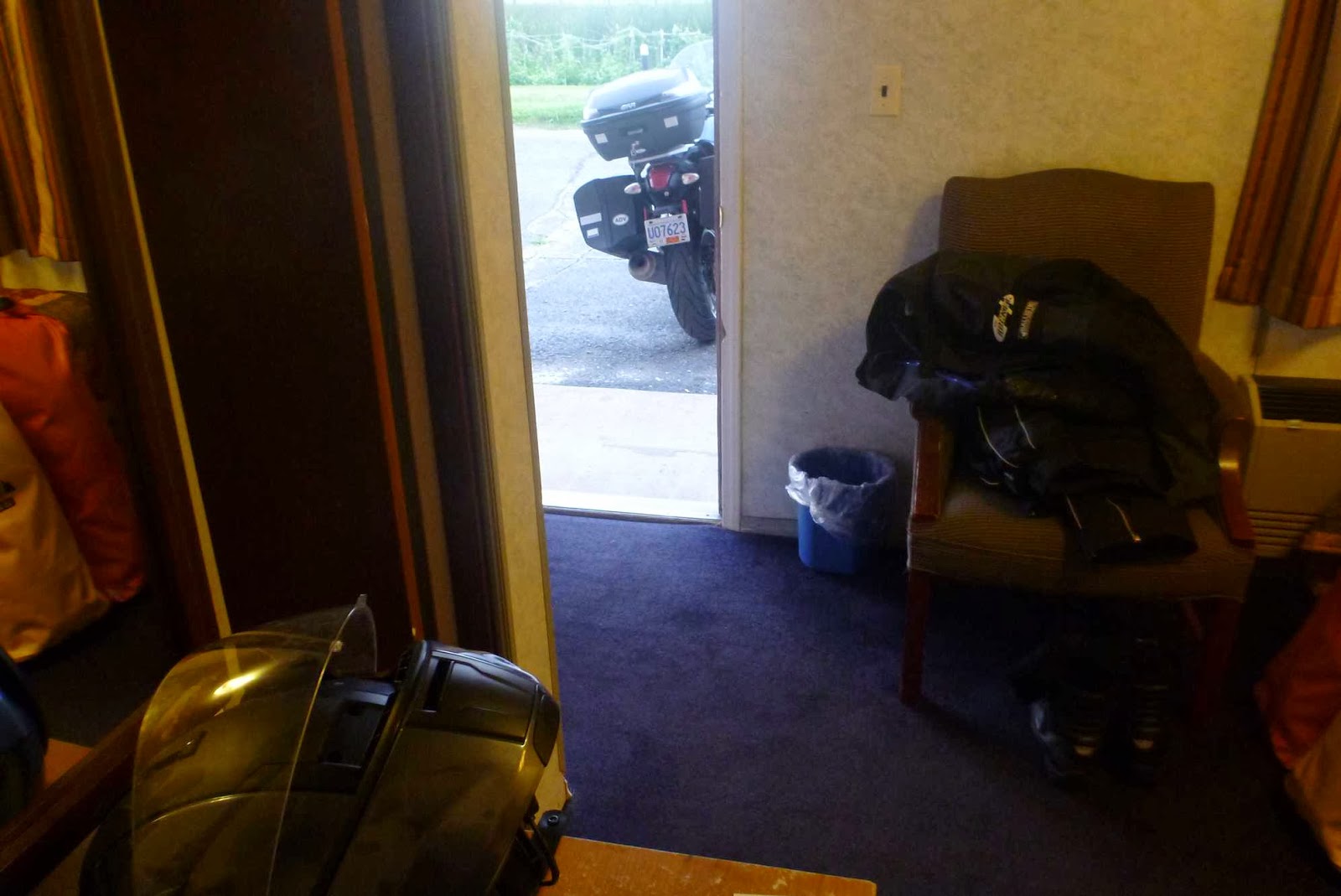 It was a hot day and the A/C was very cold and it had FAST  internet too.   It was clean enough and I would stay there again if I were by myself. 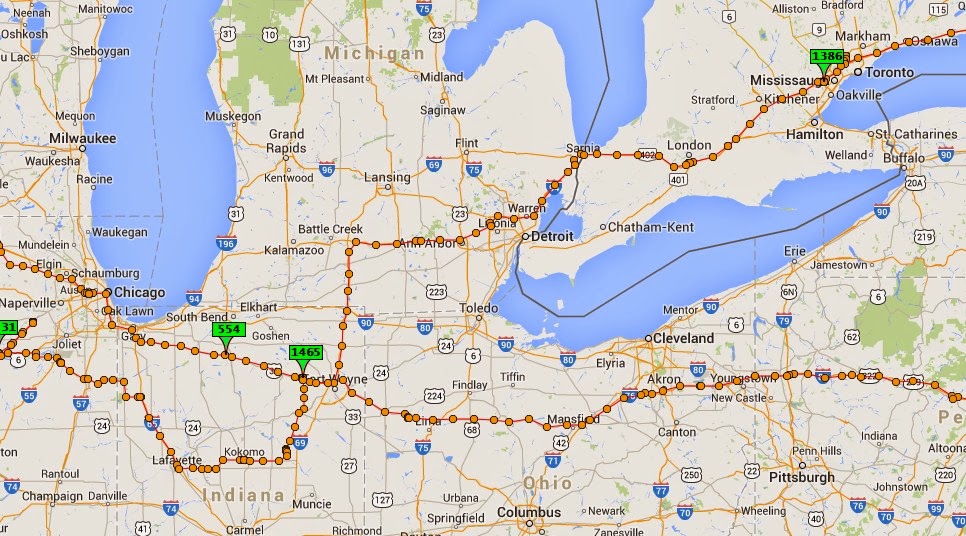 Notice that I was just West of Fort Wayne on the Lincoln Highway.   The next morning I headed south towards Kokomo, IN and got myself lost 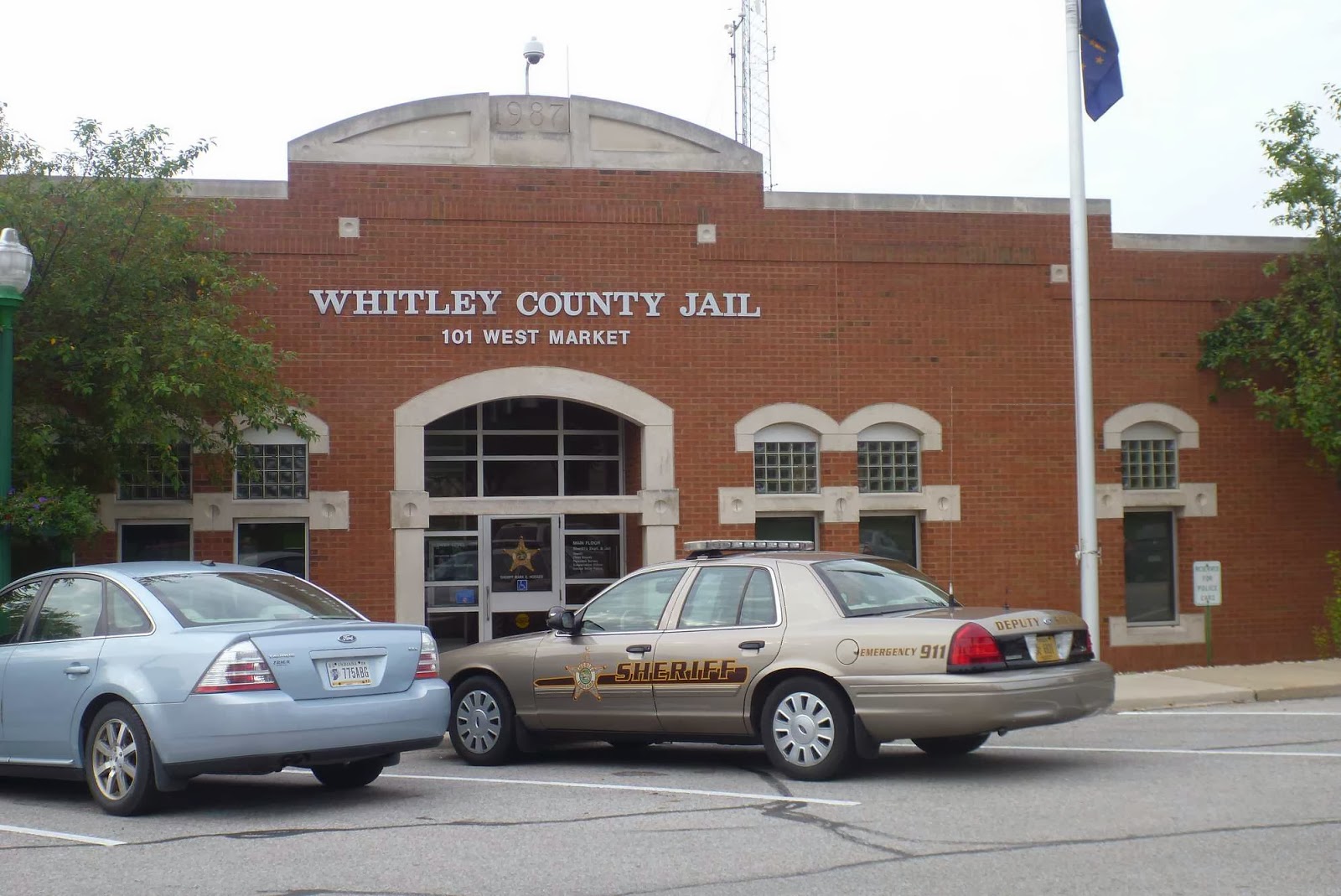 You don't get a good feeling when everything around you looks run down and you are staring at the County Jail.   I kept on the backroads in exploration mode watching the farmlands roll by.   Soon I found myself in Marion, IN and after a few wrong turns ended up in Kokomo where I entered another depressing area 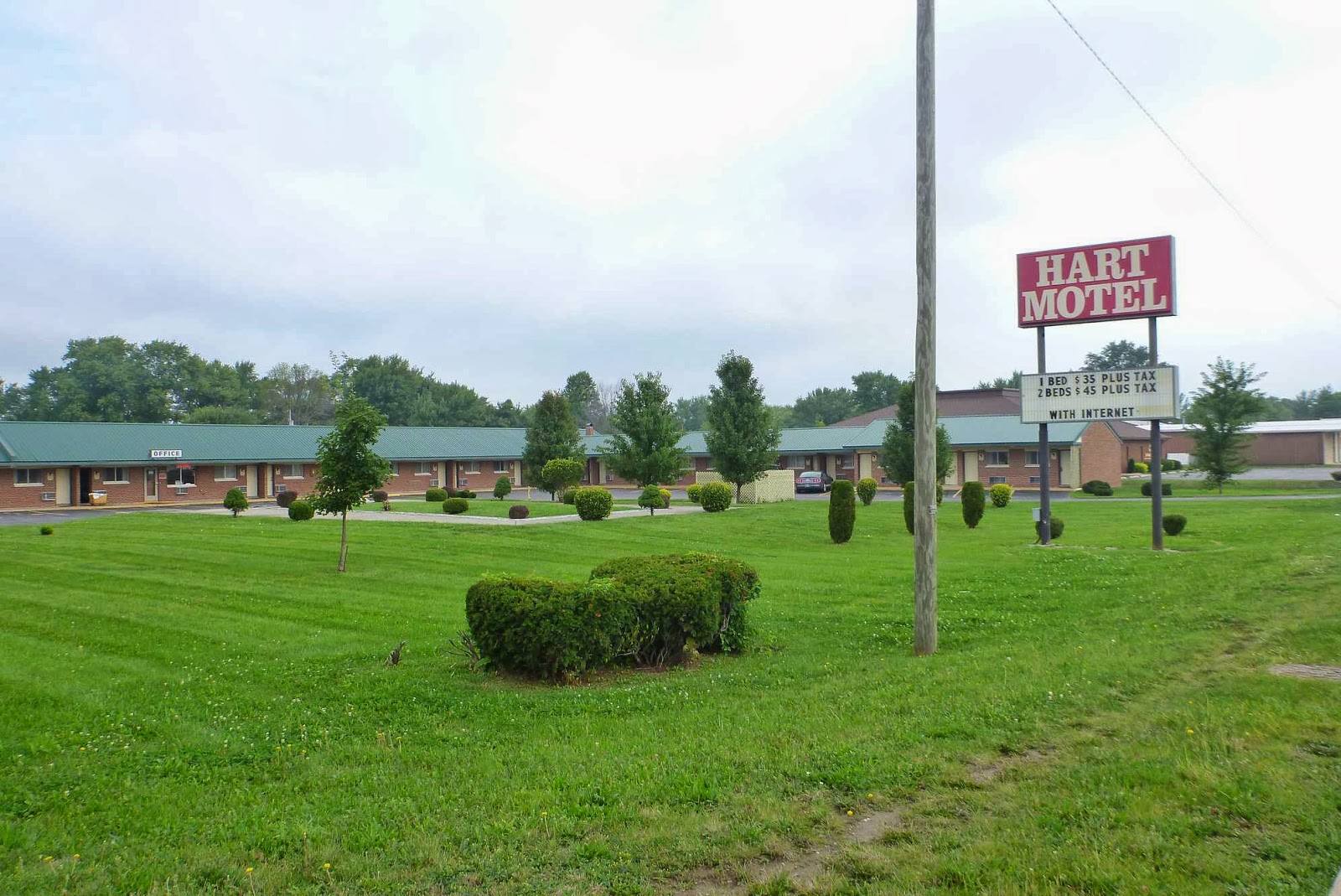 This Motel looked cleaner than the one I stayed and the rates were cheaper.  In fact the surrounding Motels had similar rates and even so, it would appear that all of them had no customers 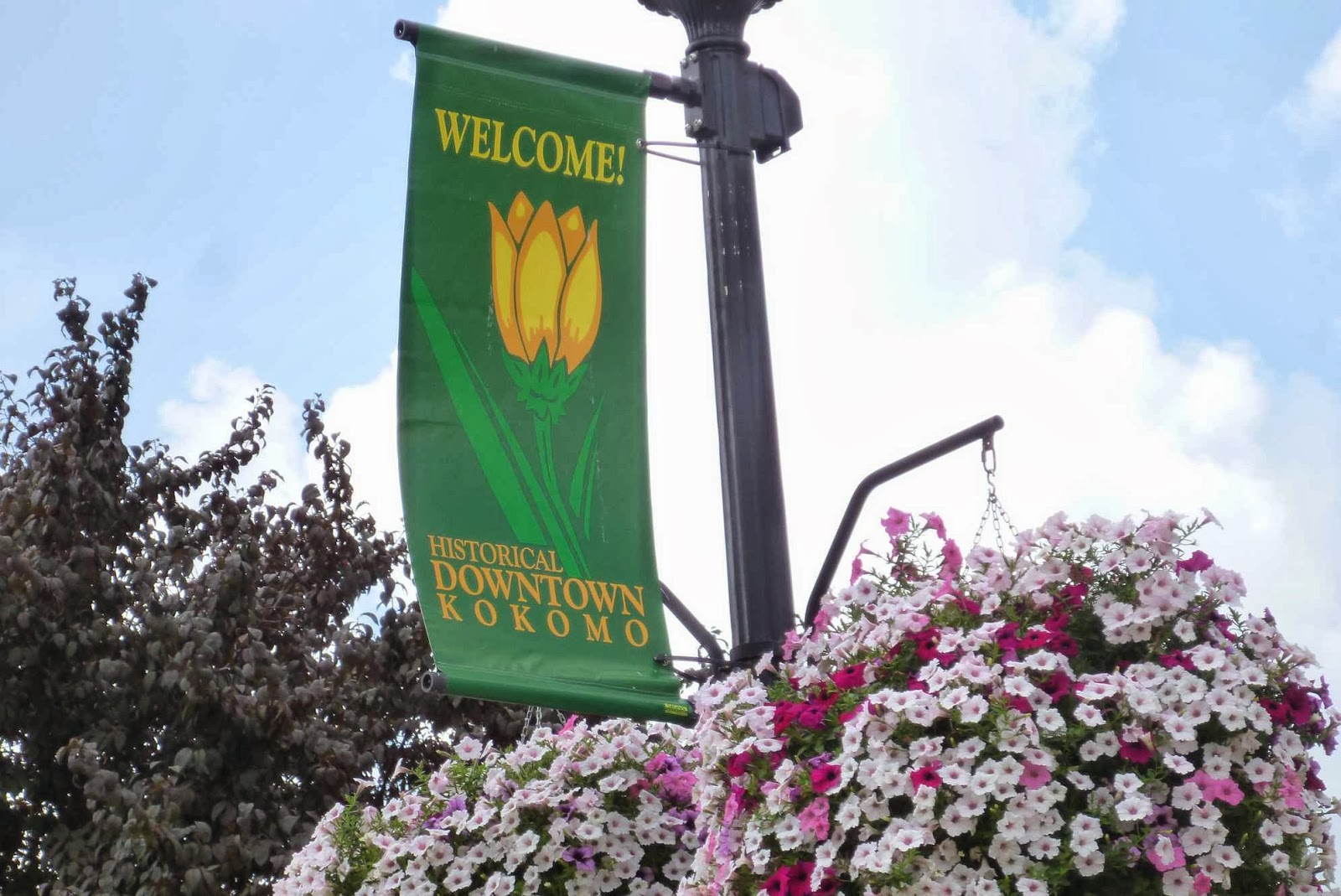 I wandered around for a while getting a feel for the town and had lunch before I headed on my way.   I tried to find my way out of town but again I took the wrong turn and ended up riding through miles and miles of corn fields  (video at the end) 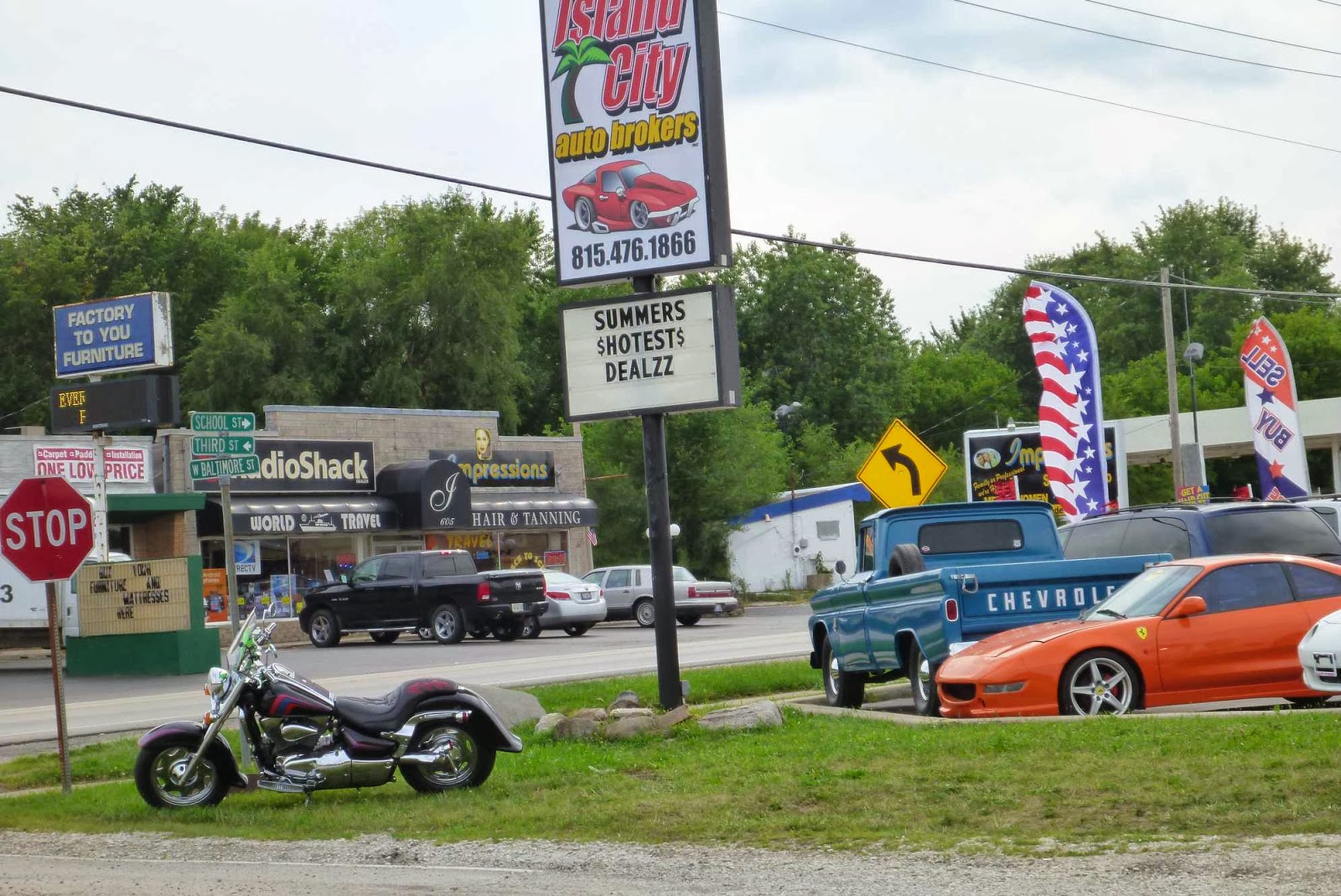 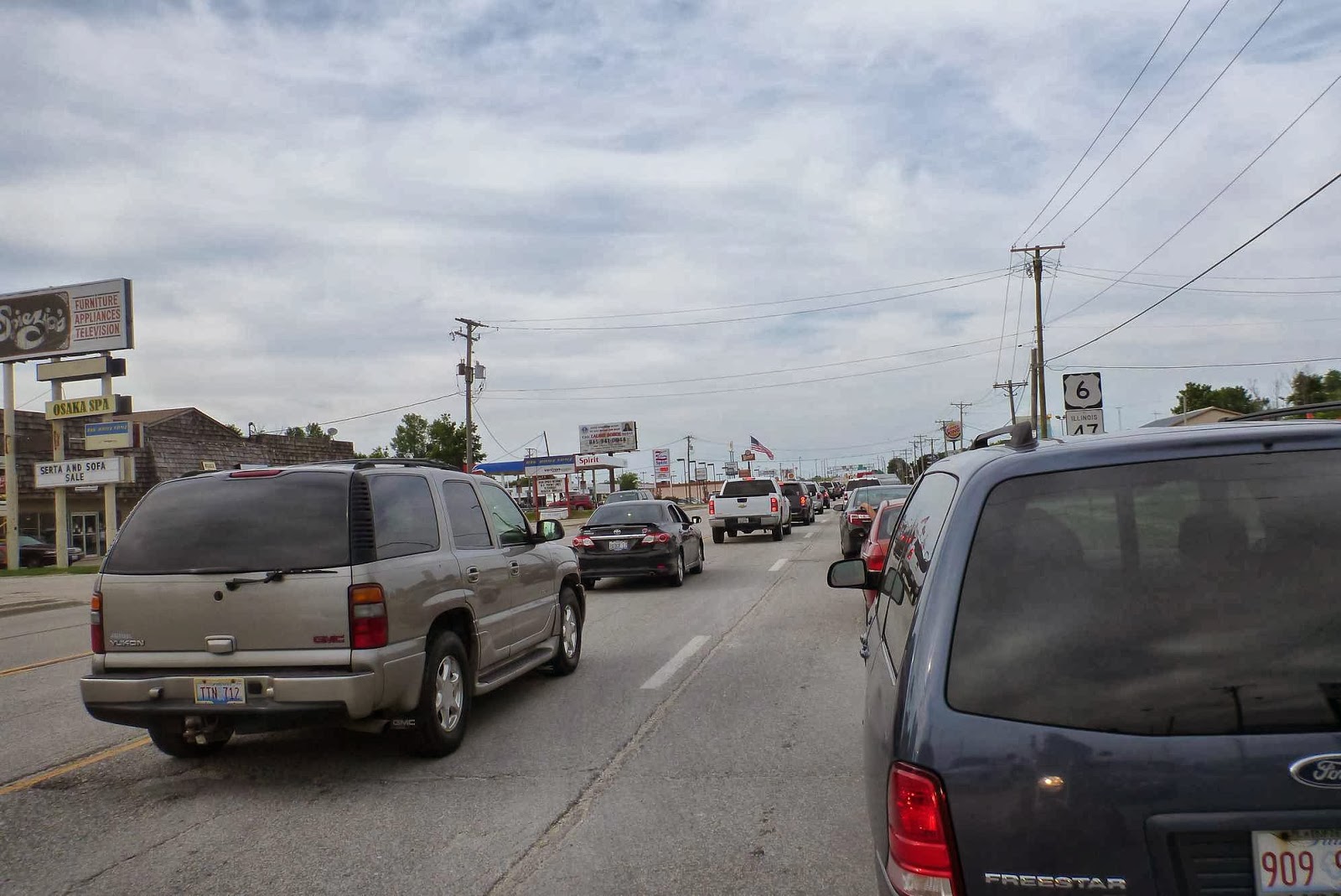 Eventually I made it to Ottawa, Illinois which was my new home for the night.  I spent hours trying to find my way out of the corn fields and trying to follow my GPS as you will see . . .