I had never camped before 2012 but I decided that it was a way to cut down on Hotel costs whilst touring on my bike.   We had a bloggers' meeting in Hell's Canyon which we dubbed iMBC2012 (some info here)  so I decided to buy some camping equipment and try it out .   We decided to meet in Baker City, OR 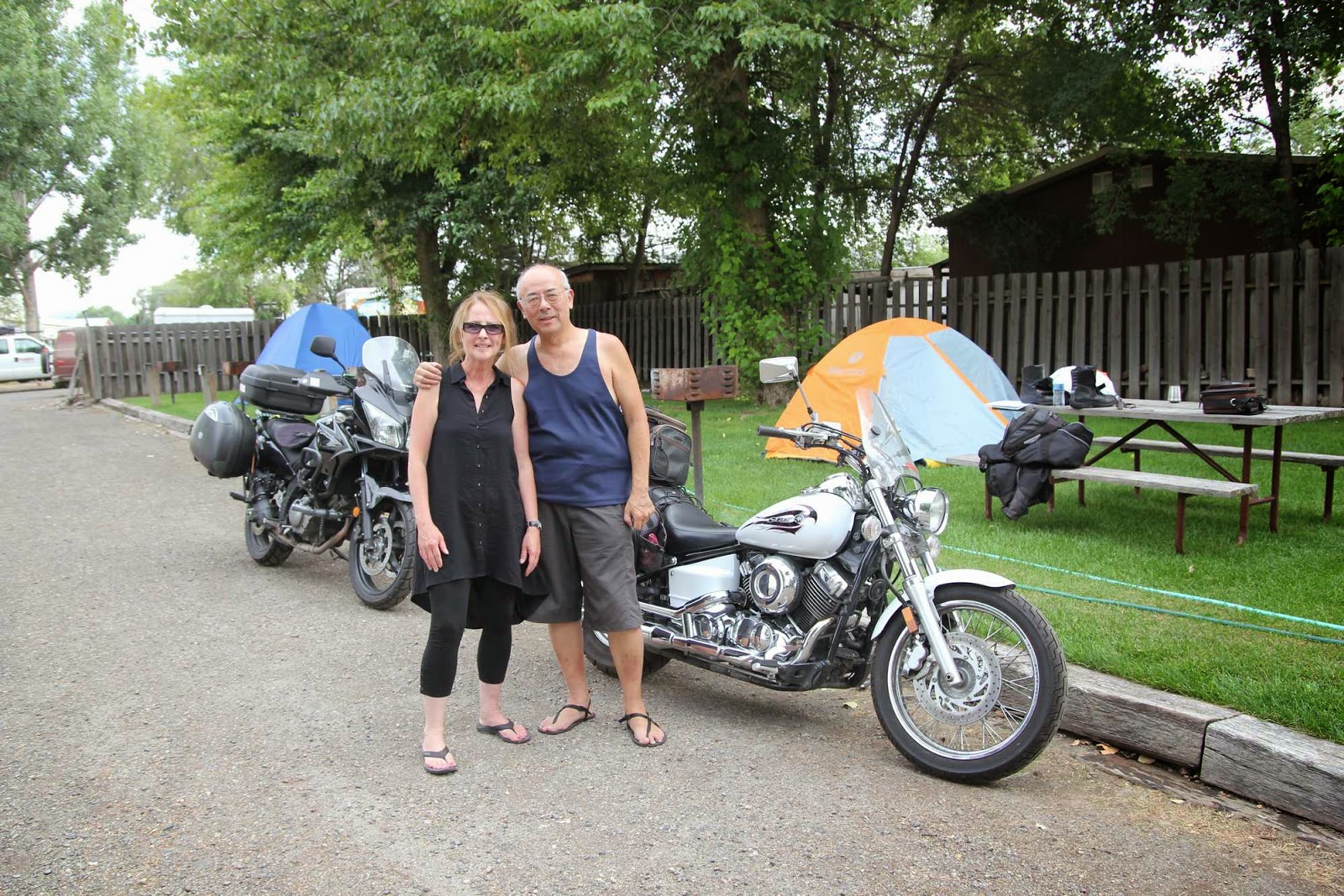 and here I am with Karen who rode her Vstar from Kingston, Ontario.  While it was my first time camping I was trying to look like I knew what I was doing 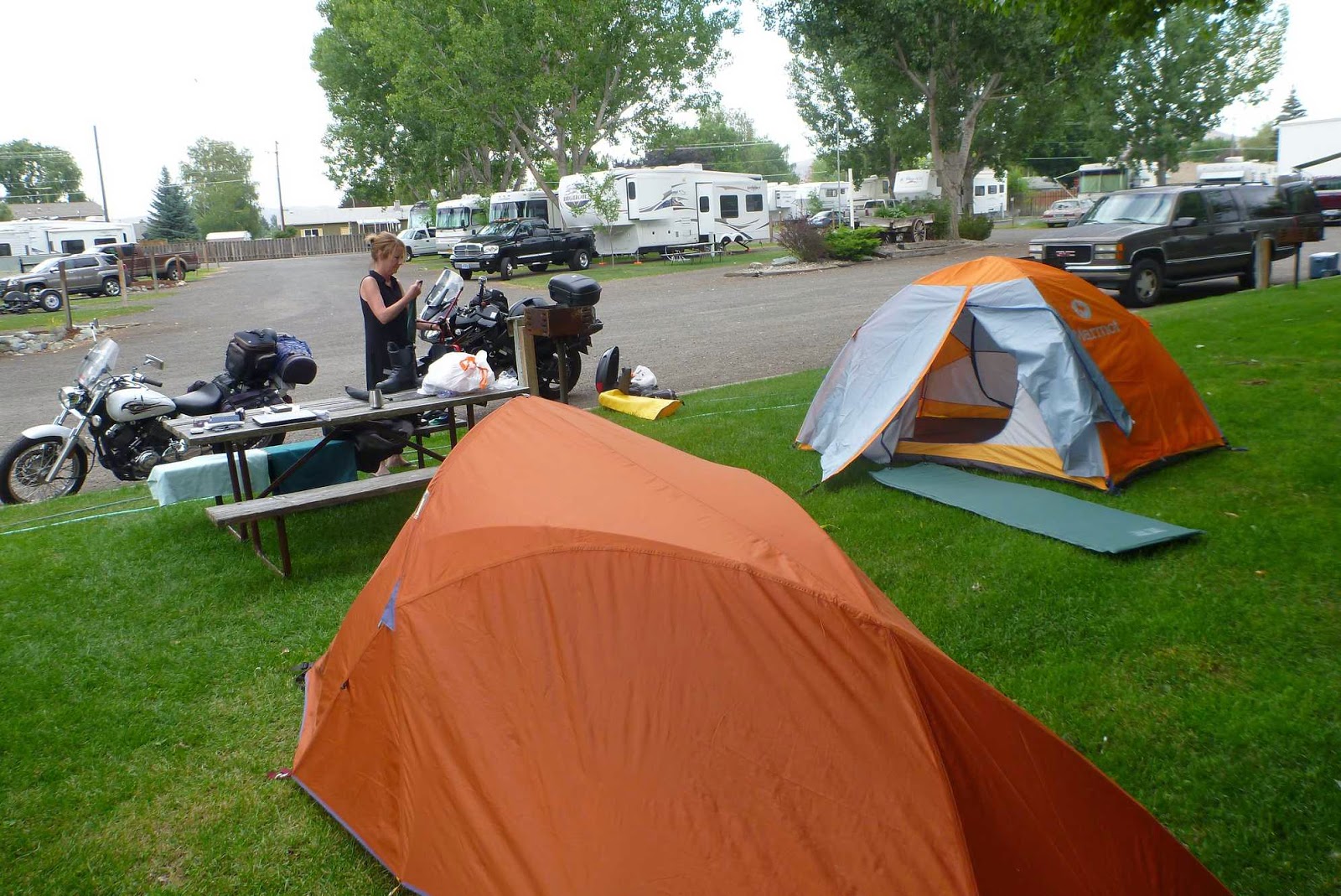 My new Marmot tent is on the right.    I like to have facilities (ie water) so I can gently ease myself into enjoying it.    The next night I moved over to the Hotel to be with the others but all the time I was thinking that I should have stayed at the campsite and had company, rather than be alone in my room 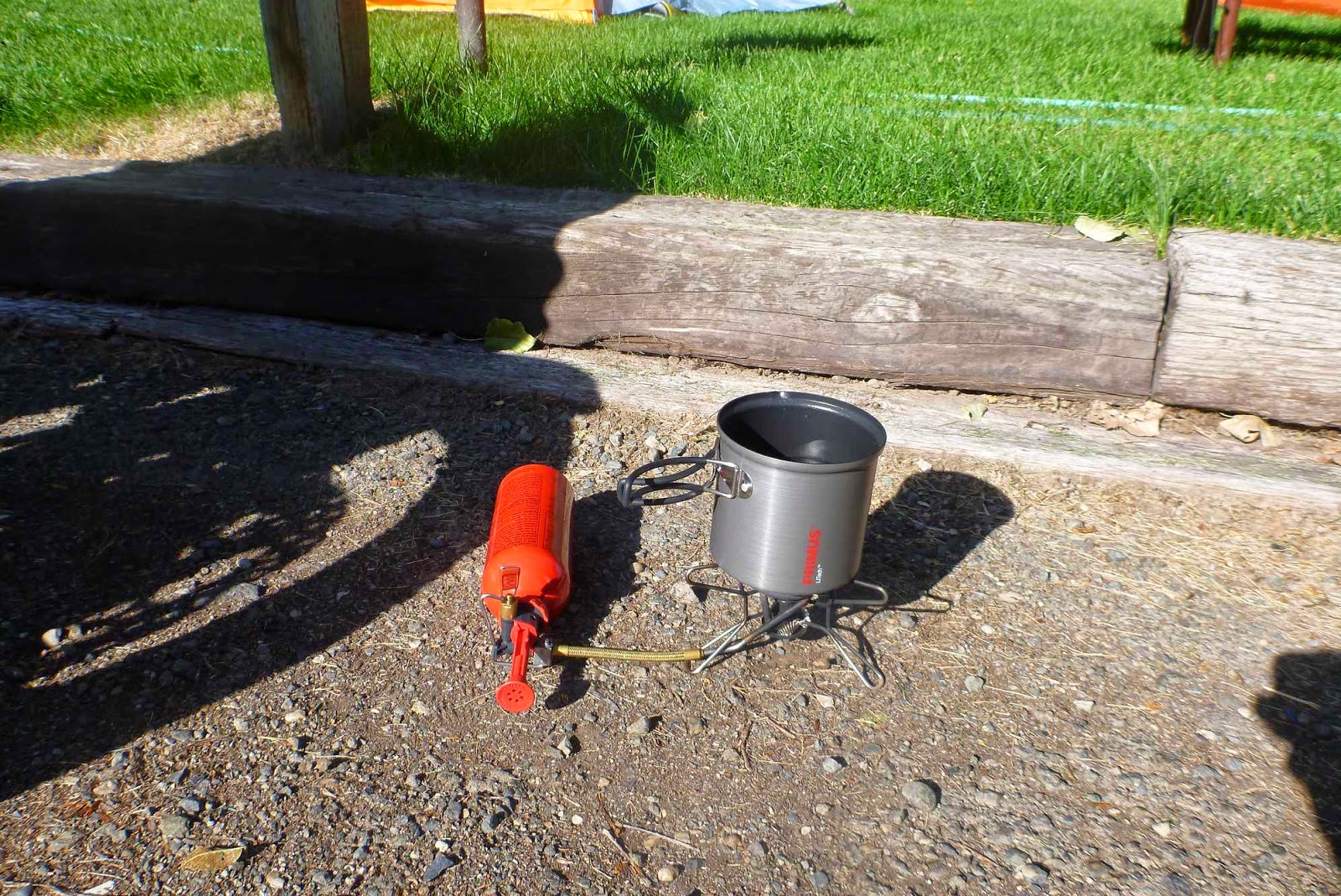 It wasn't long ago that I would spend my time looking at electronic stuff at Best Buy or Future Shop but now I seem to be more obsessed with looking at Tents, stoves, sleeping bags, folding camp chairs and other outdoor stuff at places like REI  or  MEC.ca    I've even started scanning Craigslist ads and bought a backup MSR whiperlite just in case my other one fails

With Spring upon us my thoughts have turned to camping and riding and even though I have no plans to go anywhere I have already gone into the MEC retail store several times during the past couple of weeks looking at "stuff".    I dug out my cooking kit and spread it out on my kitchen counter 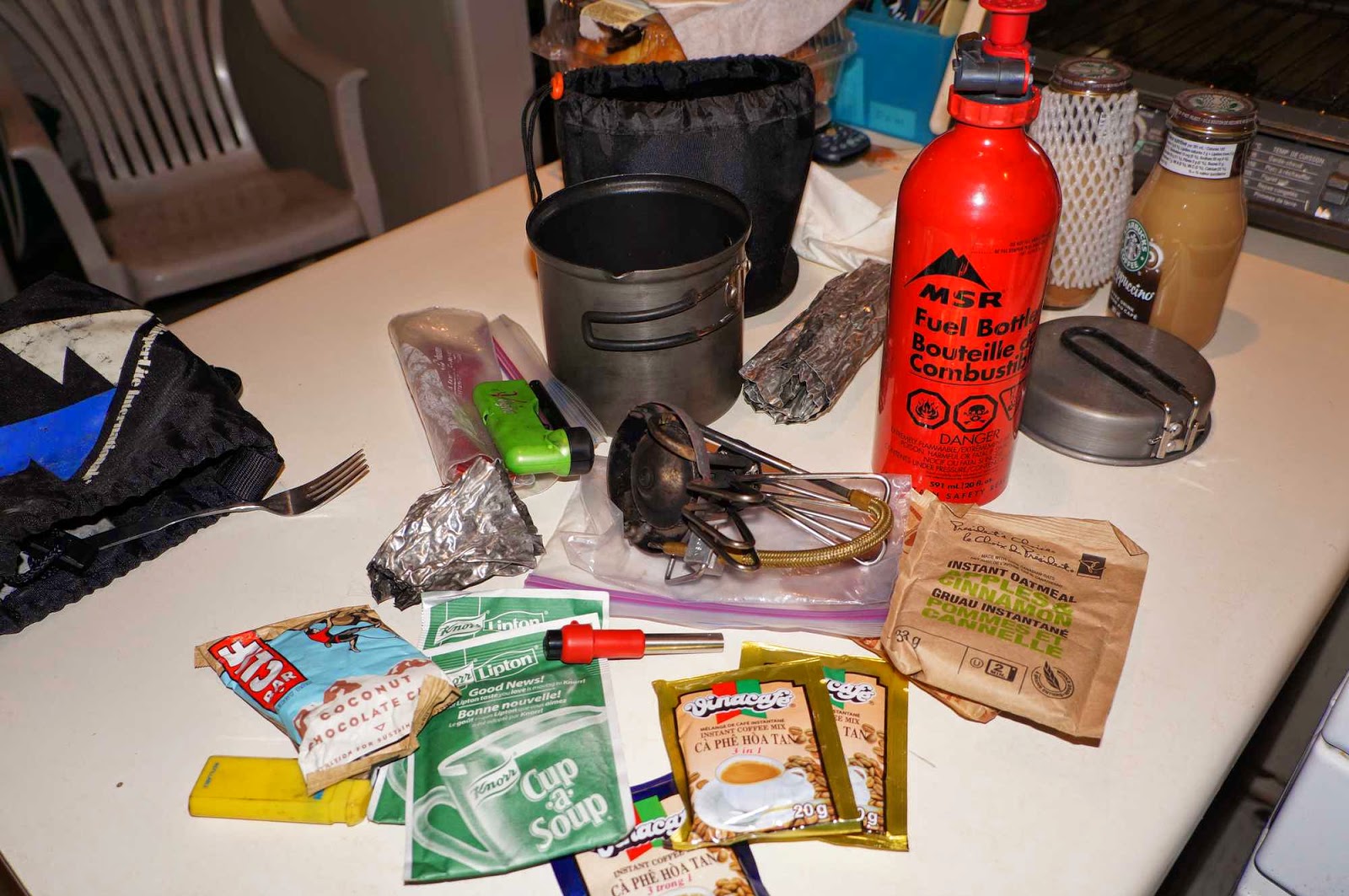 Inside my cooking pot I have instant: cup of soup, instant coffee, instant oatmeal and a Cliff bar.  These items I carried across the country from the Pacific to the Atlantic and back home and here they are ready to use in case I need to have something hot to drink.   I love my MSR liquid fuel stove but I bought a cheap stove on the internet 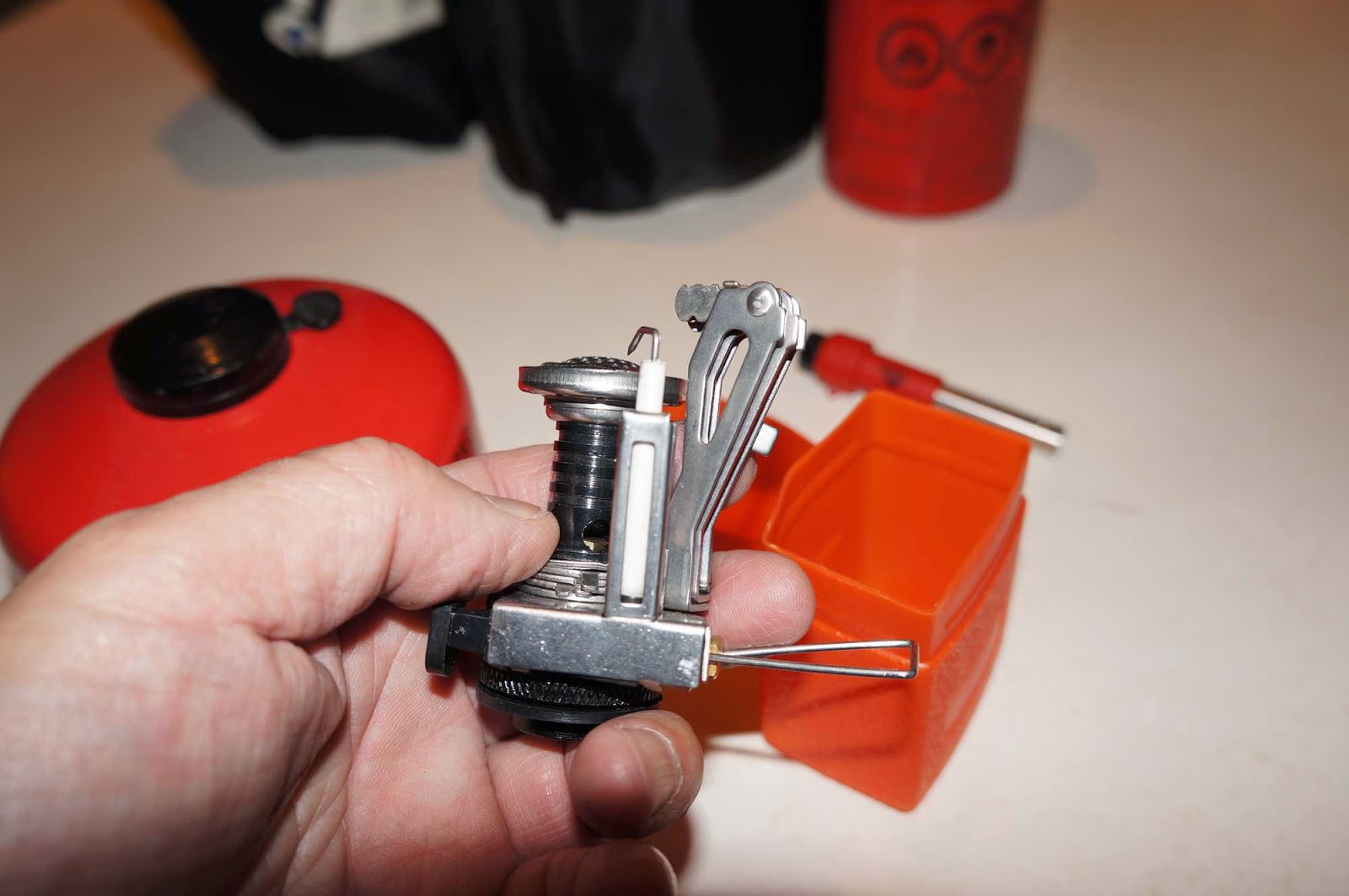 It is very small and uses small gas cannisters and folds up into a small plastic case. 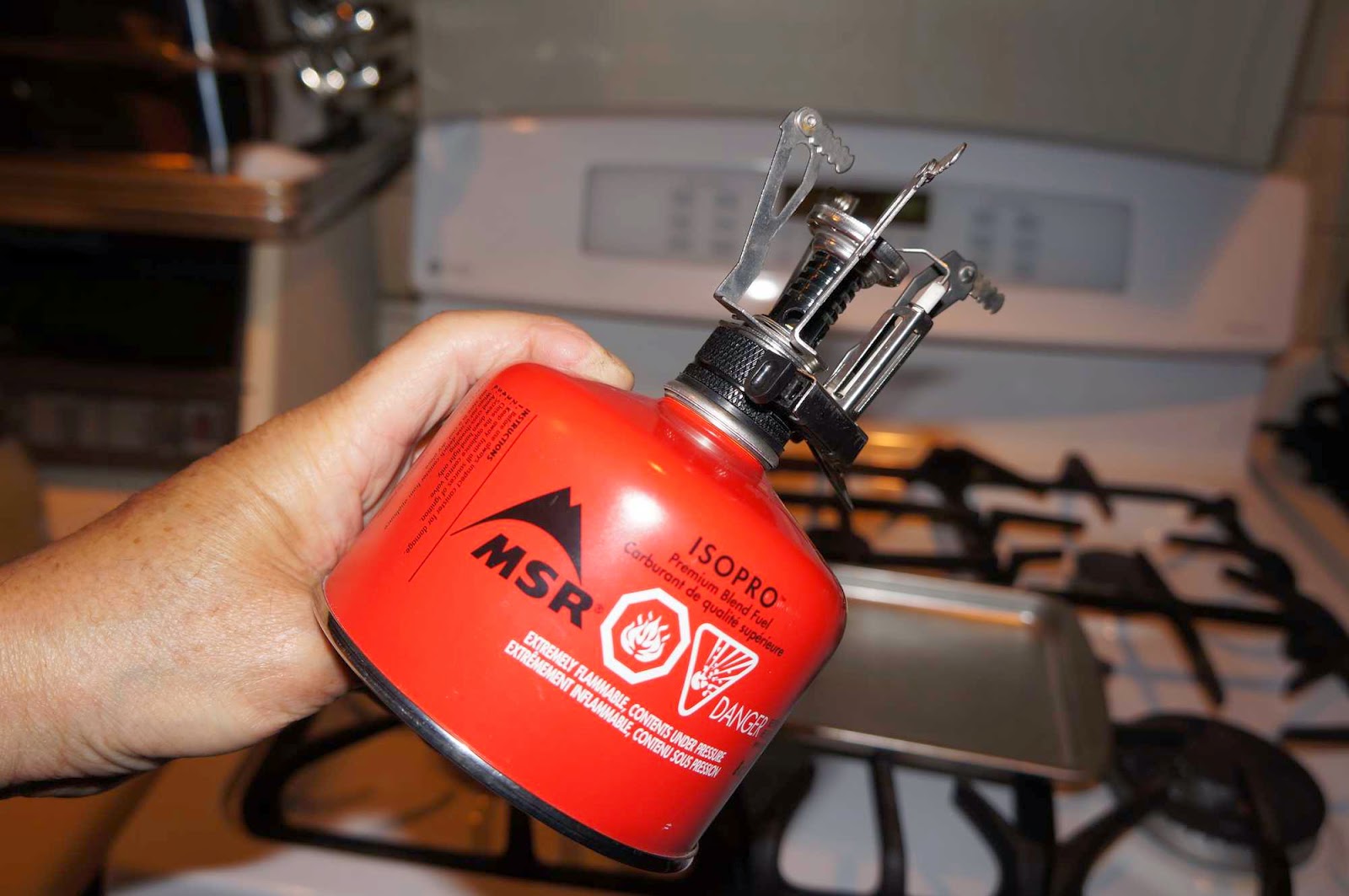 Here it is mounted onto an MSR  ISOPRO gas cannister.   It seems well made and for the price it is a bargain.  It also has a self igniter so you do not have to use a lighter 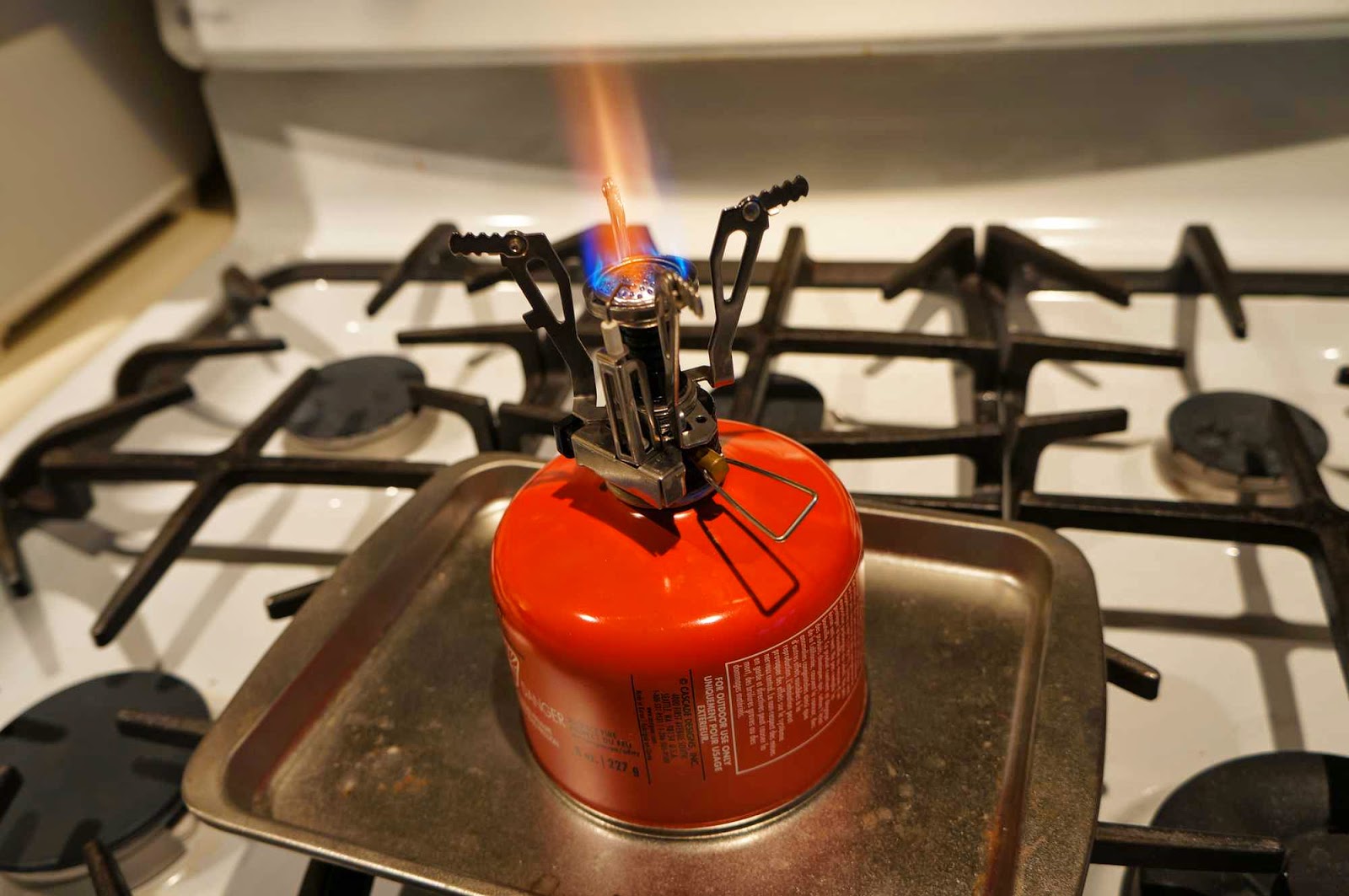 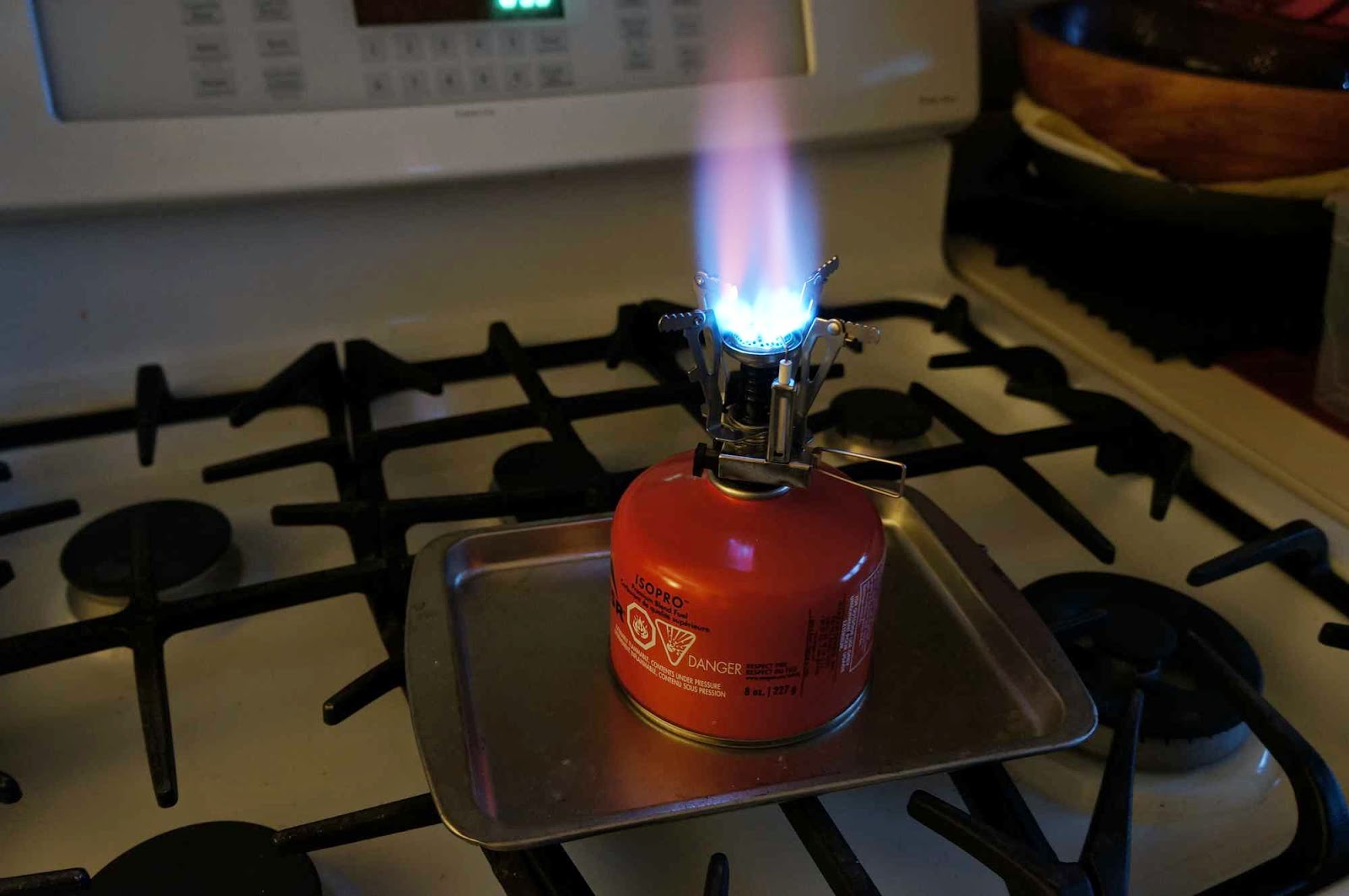 Then all you have to do is to dial up the gas until you get a blue flame and then it is ready to heat your pot of water.  It is very fast to set up and the water boils really fast 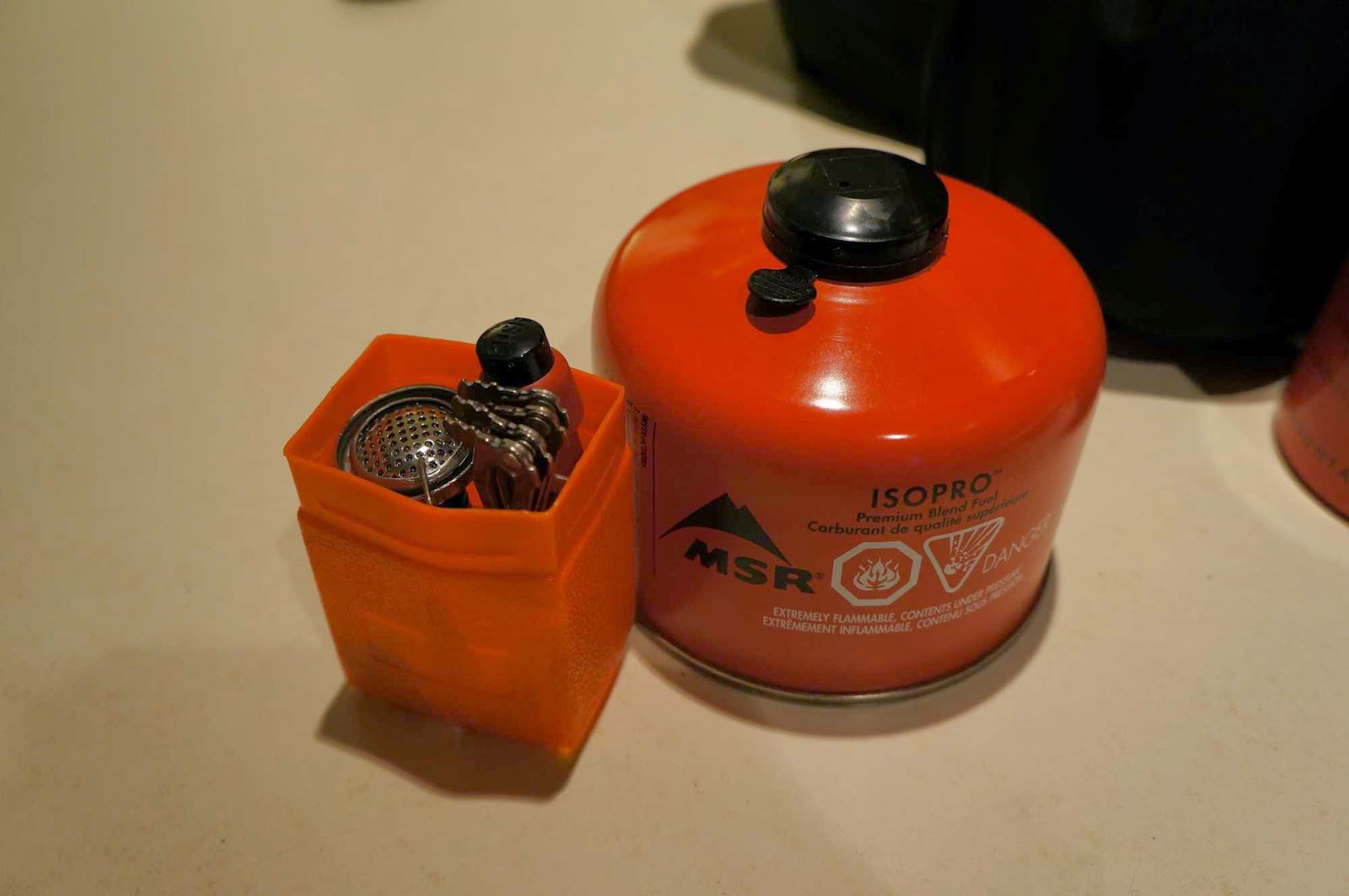 It cools down fast and then you just fold it up and put it into its plastic container.   The cannister is probably 4x larger in comparison.  I also got hooked on alcohol stoves and last year I bought a couple of different designs 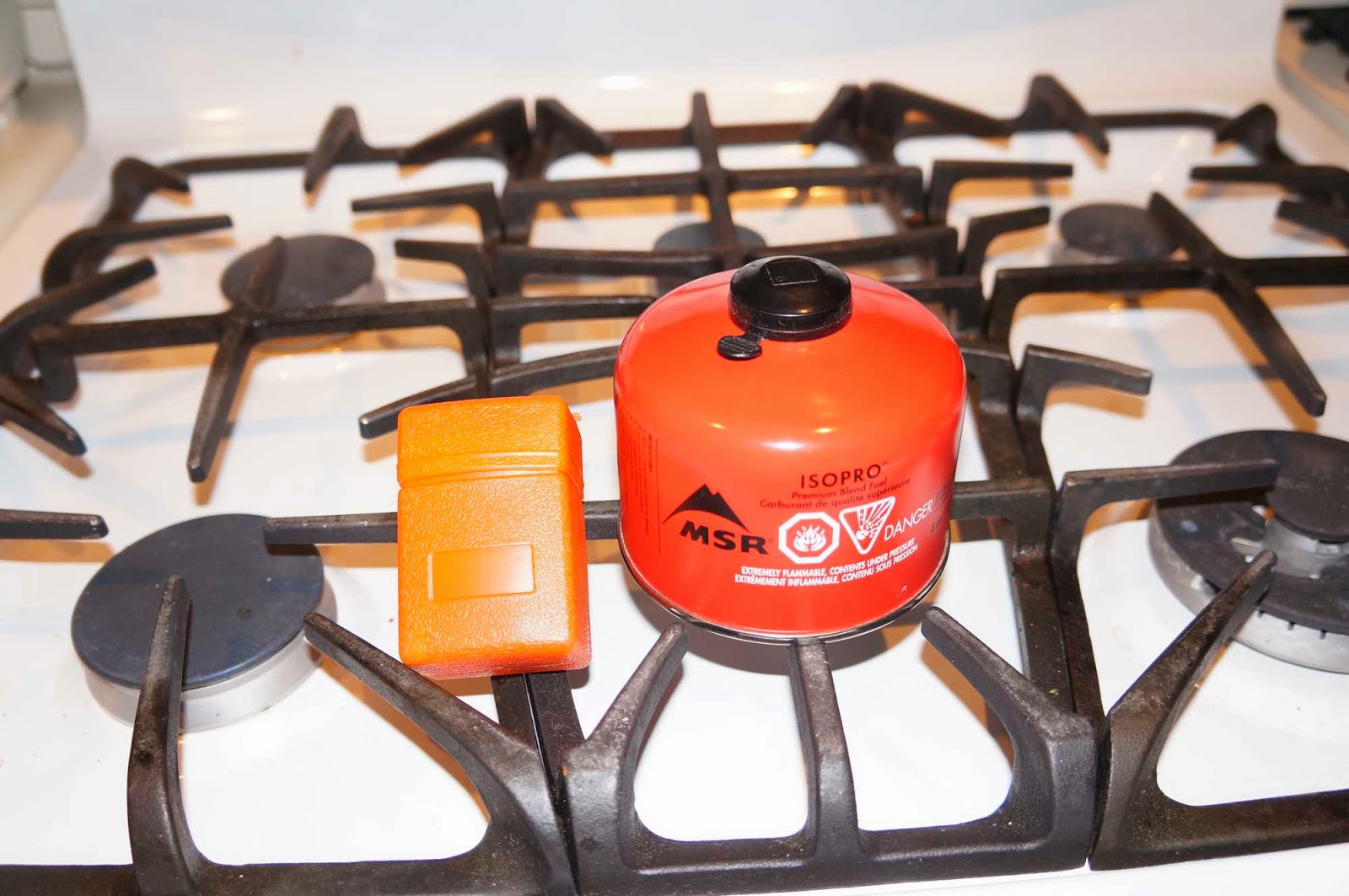 Since this stove is so small I was going to include it into my cooking kit but my MSR Whisperlite is more versatile as I can use different fuels, which includes pump gas.   It may not be so easy to find an ISOPRO cannister whilst on the road.

I mentioned that my tent was bought new in 2012.  It is a brand name, Marmot so I thought that it would be leak proof.   Well it was until we made it to Bar Harbor, ME and we got rained out It was clear and not raining when we arrived but that night the heavens opened up with flash flood warnings the next day, so we had to cancel our plans and hang around the town 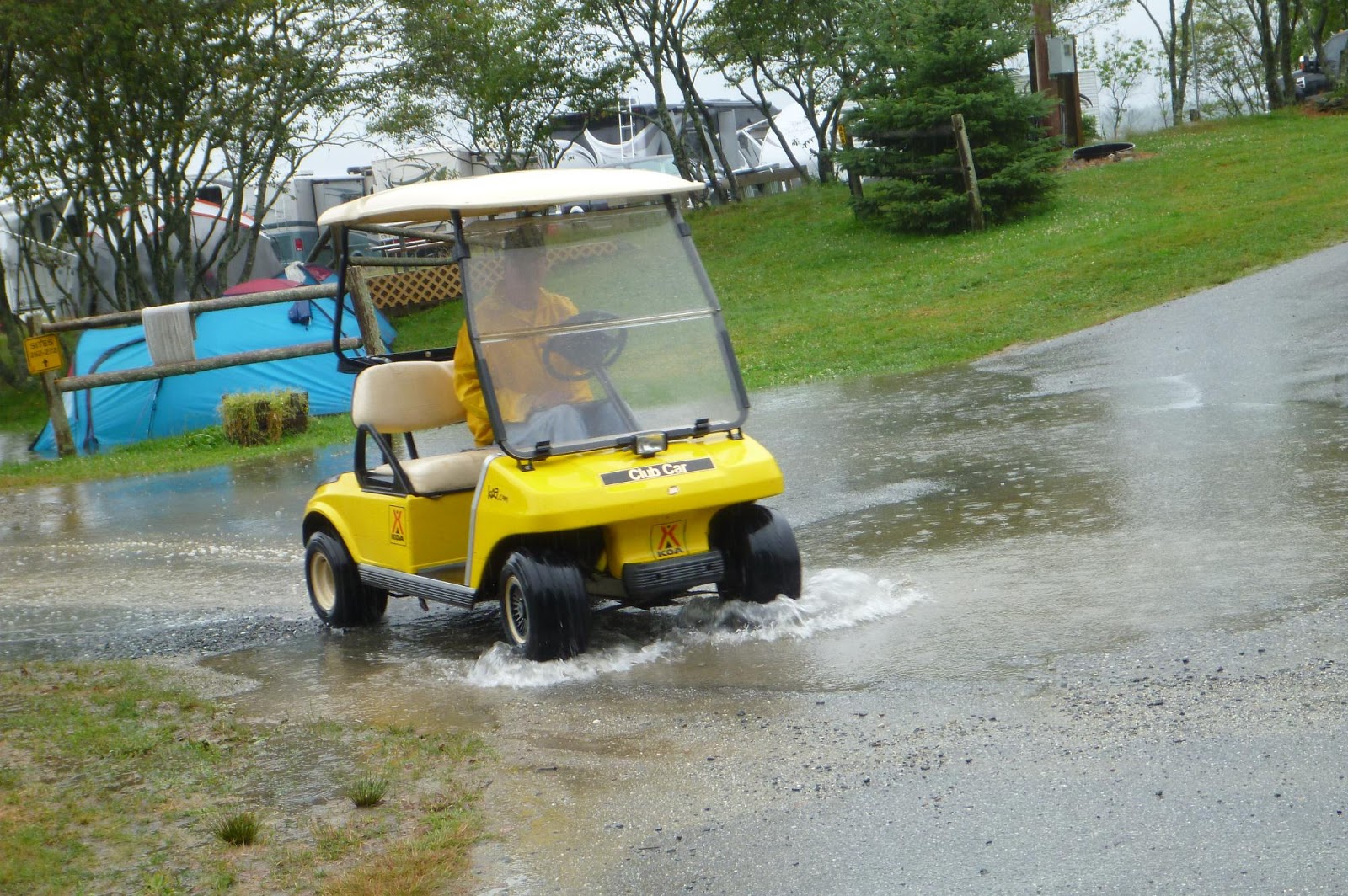 This is where I noticed that I was getting a bit of water inside my tent.   Not a lot of water but I wasn't sure where it was coming from but I used my camp towel to soak it up.  I think my rain cover was not long enough and not covering the bottom few inches of my tent 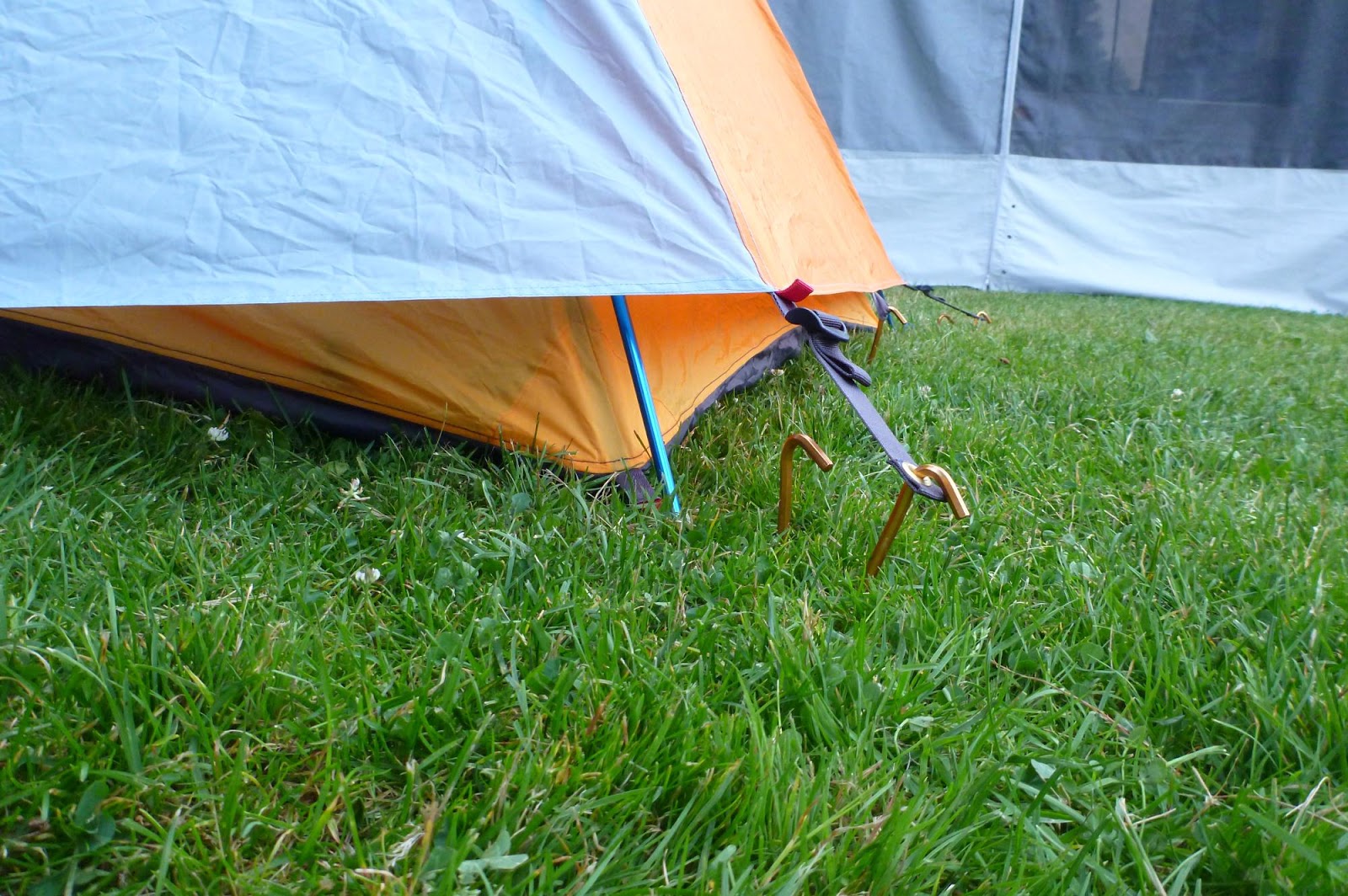 The weather on PEI was not that great.   Everyone told us that the previous 7 weeks was Hot and sunny but when we arrived it was always threatening rain and coolish.   Notice that I used the stakes to ensure that the rain fly covered more of the tent 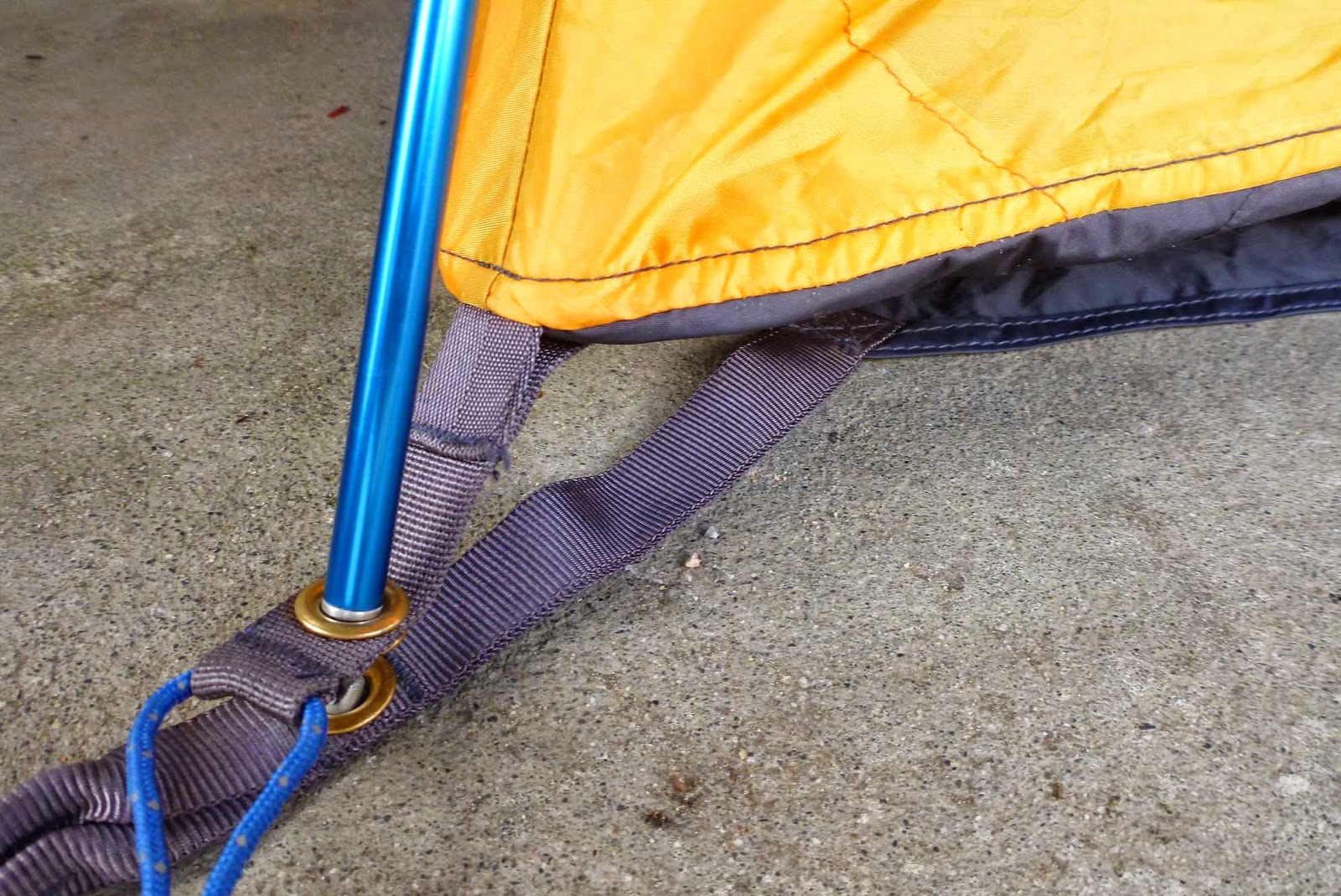 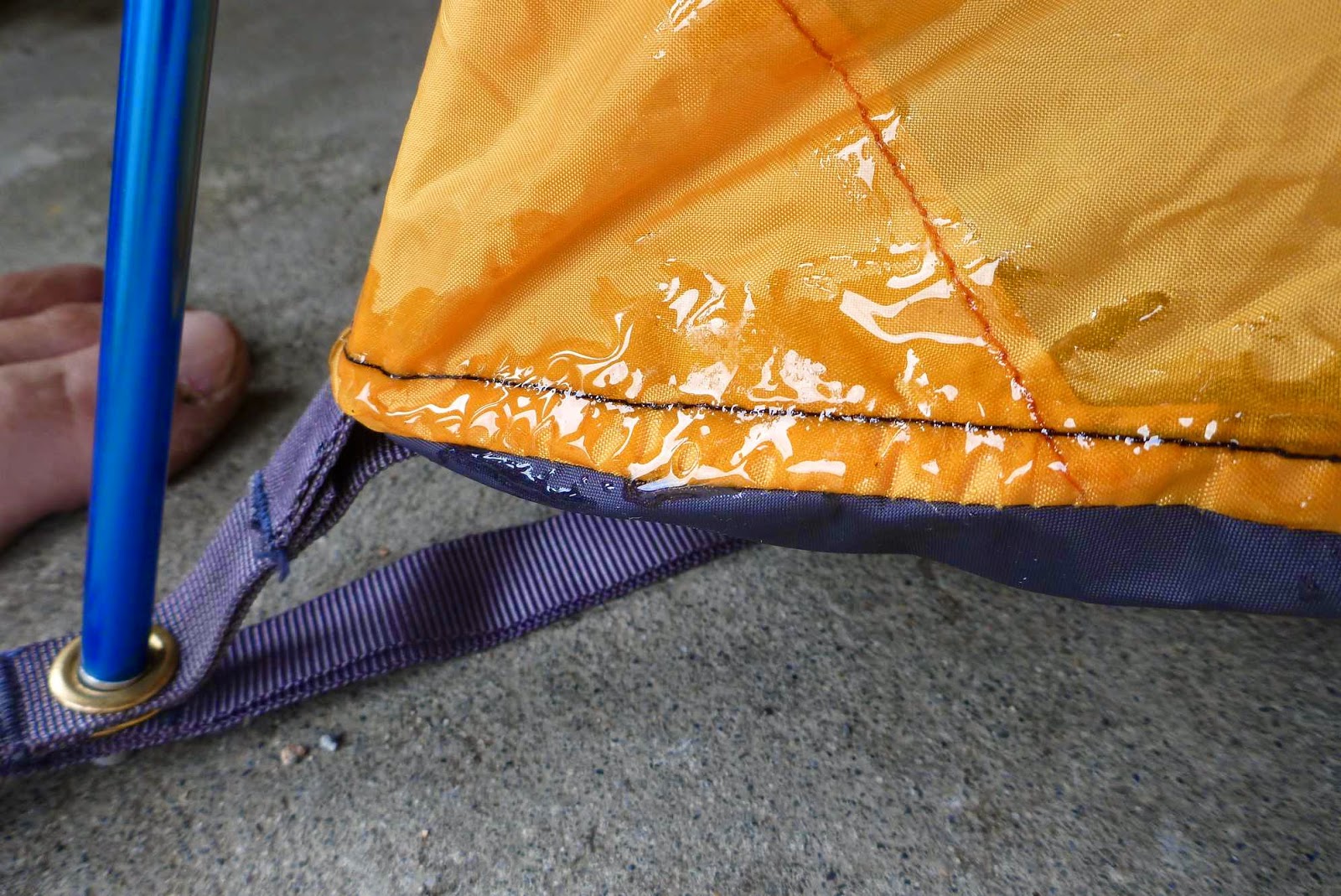 I hope this works.   But in the meantime I had been looking at new tents.  Not because I need one right away, as I'm not camping this year but I want to be ready for my next trip.   I was thinking of a larger tent, perhaps a 3 season,  3 Person for more room inside.    For some reason I am going to miss camping this year even though I am thinking about it all the time and wishing I could ride somewhere,  if only for a couple of days. 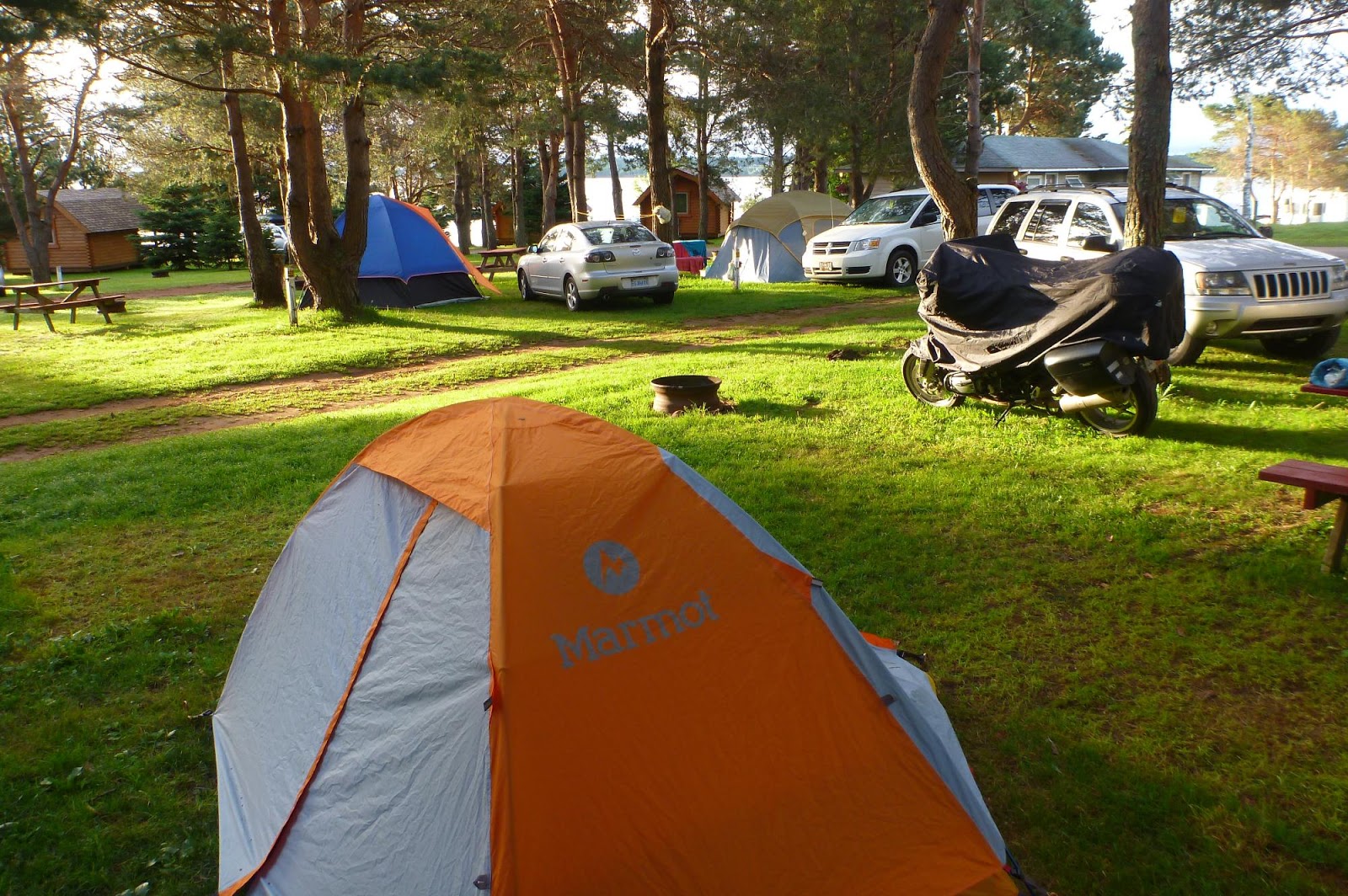