Minus -8°C and dropping

It's cold here.  We are about 10 degrees lower than usual.   Not as cold as  Here1  nor as much snow as  Here2   but remember that most of us only have summer clothes and when it gets cold all we can do is to put on more layers of summer clothes.  We are in the middle of a rare cold snap and last week I bought a  pair of gloves and a fleece neck warmer,  dug out my marino wool toque and put on my newish battery powered Mobile Warming Jacket which I wrote about  Here3 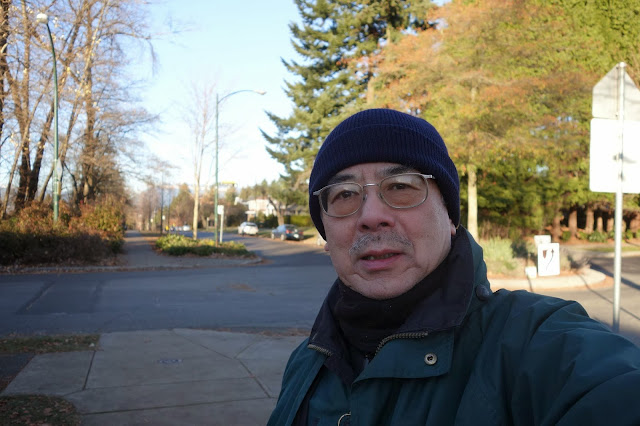 I even put on a light summer jacket over my Mobile Warming jacket and turned it on to HIGH and went for a walk to test it out .   I went down the block and notice that this bike is still locked to this pole.  It has been here for a few months now and probably abandoned 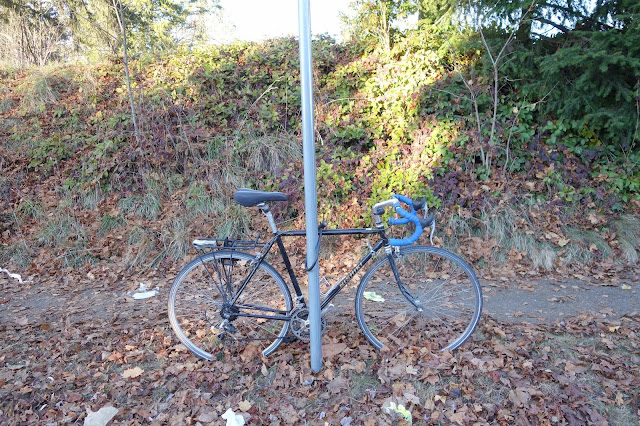 I decided to walk up these steps to the park 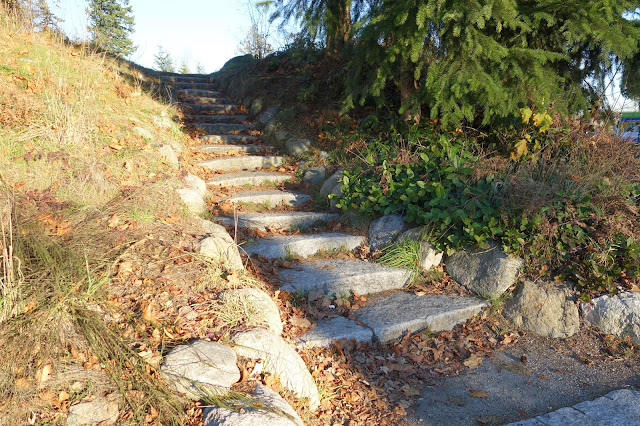 In case you were wondering,  I am wearing my Merrell Barefoot Life Tour Gloves which I mentioned Here4 .   I actually liked them so much that I ordered another pair from a local store and they are yet to arrive.   They are not really a winter shoe and are quite thin but I seem to be okay in spite of the sub freezing temperatures. 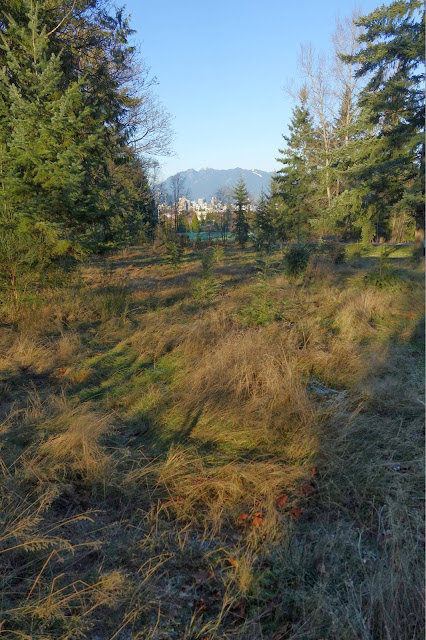 Part of this park is ungroomed but you can see downtown Vancouver in the distance.  We are only about 4 miles from the city centre and about a 10 minute ride by car 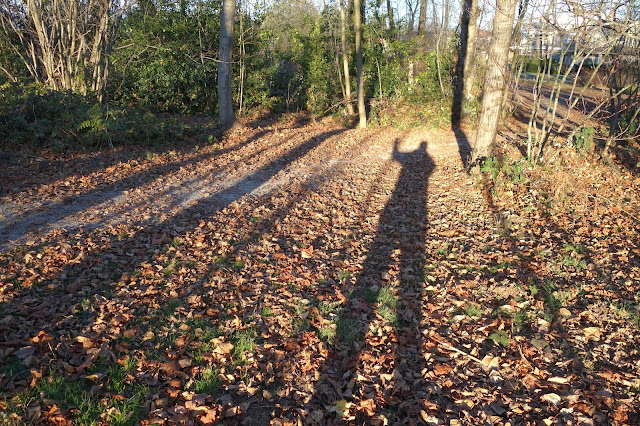 Even though the sun is shining there is no warmth and it is casting a long shadow.  In our part of the country it doesn't snow when temperatures get below freezing.   It is going to be colder tonight and with the wind chill factor it is going to feel like it is -15°c ,  mainly due to the forecasted wind. 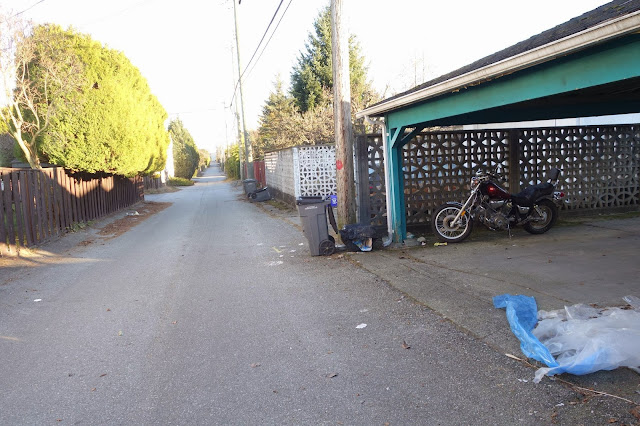 I decided to walk over to the local Mall and noticed this lonely Yamaha Virago .   I am not really a shopper unless I need something and even though we are only 5 blocks away, I seldom come here 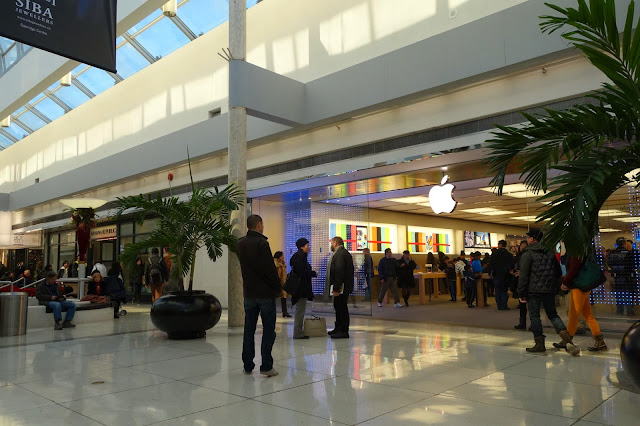 Today the Apple store was calling my name so I went inside just to take a little peek.  It was busy in there.  Lots of people looking at Stuff and they were giving lessons on how to use their machines.   I know nothing about X iOS or Maverick but if I did I would be thinking about one of those Macbook Pros but I don't want to have to learn another operating system at this late stage in life so I will stick with what I know and keep using PC's 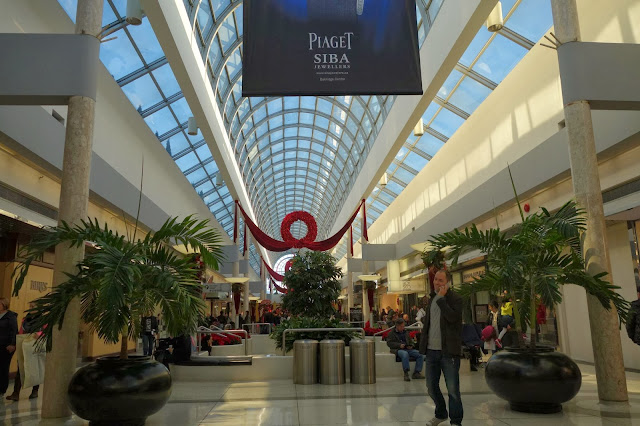 I don't know why I am here but since I am I decide to go over to the Source (which is the old Radio Shack).  I like to look at electronic gizmos.    There are sales going on everywhere and lots of people shopping for Christmas.   I find that this time of year depresses me.  People shopping and spending money they don't have to give away gifts that people don't want.   While we appreciate the extra time off we stopped celebrating decades ago and we are not caught up in the stress of the season.   Gift giving for us can happen anytime during the year if we notice something that the other needs, then we would just buy it then, whenever that is rather than waiting for a special occasion.

When you are young you look forward to your Birthday.  As you age, not so much and you would prefer that they appear not so often.   Time seems to go by much faster now 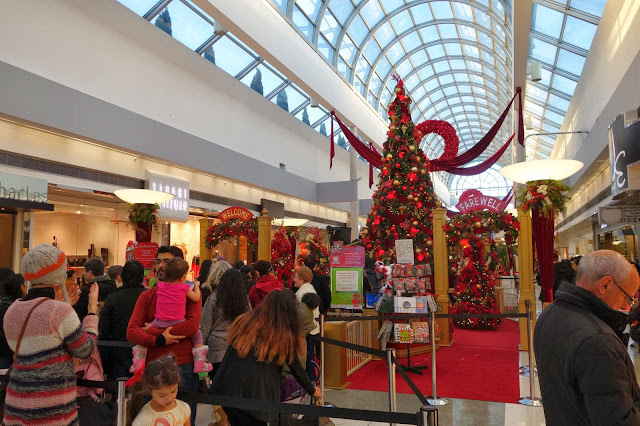 Taking photos of children that are not yours, is forbidden.   I have been stopped many times in public places for snapping my camera so I cannot show you Santa Claus but only the line of people waiting for him 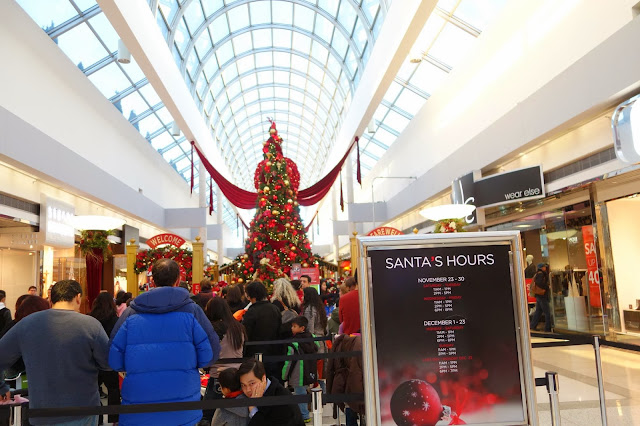 I visited a few more stores and headed home.   My Mobile Warming jacket did not seem to be doing a very good job even though I "thought I set it" on HIGH and when I got home I figured out why it was not working.    I had it set to the TOP  LED for the high power level but it seems I had the controller upside down and it was only being set to 25%,  rather than the 100% that I thought.

I'll have another chance to test it out tomorrow