Barefoot & Pregnant *** edited to include recipe

I knew that would get your attention.  I don't think I'm pregnant but perhaps it looks that way because I eat too much.  Last week I spent a whole day in the kitchen baking and getting a bit frustrated.  It started out happy as I went to the store to buy some zucchini and a container of vegetable oil to make a proven recipe for Chocolate Zucchini Bread/loaf , from an accomplished baker .  I checked my cupboard and could not find a bundt pan.  I thought I had one. 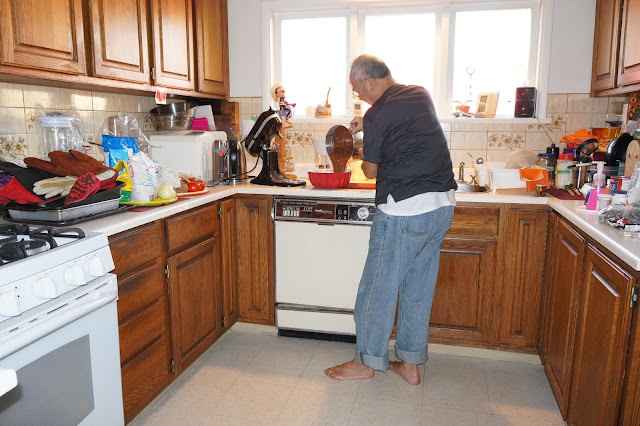 So off to the store again to buy one and wouldn't you know, there was a recipe for a chocolate bundt cake on the packaging.  I have found that when a manufacturer puts a recipe on their packaging it is usually a proven, time tested and good tasting recipe so I changed my plan and decided to use this newly found recipe instead.  It was also Vegan as it used no eggs or dairy products 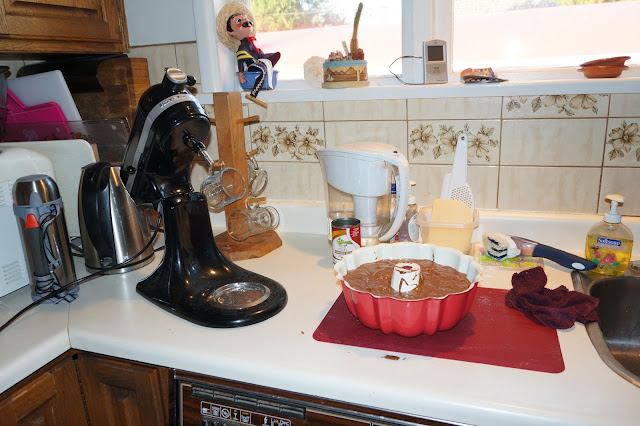 I more or less followed the directions and mixed up my batter and filled my new bundt pan.  I also bought a can of PAM to make it easier to release the cake from the pan.  I cut down the sugar content by about 30% 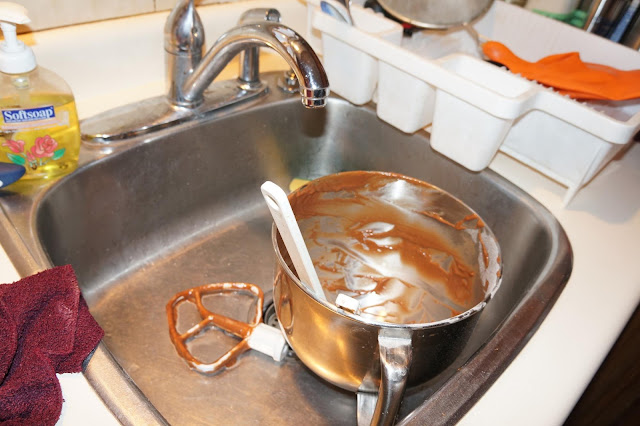 The hardest part about baking is having to clean up after yourself. 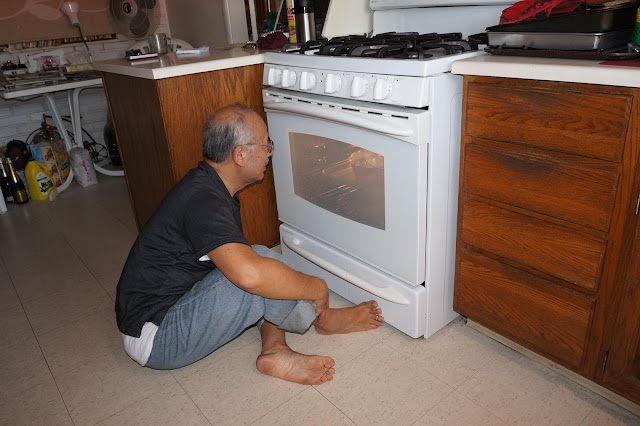 The easiest part is watching the batter rise while it bakes. 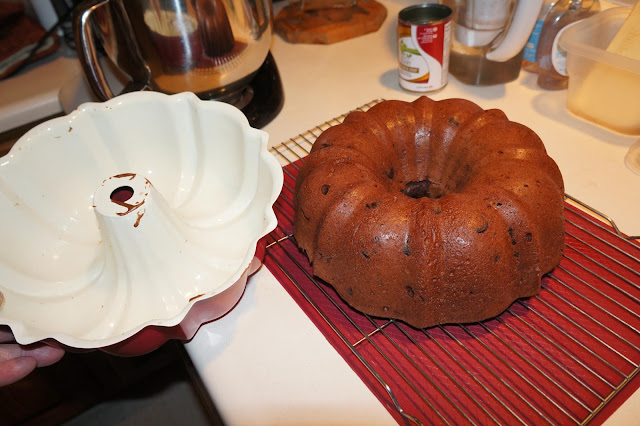 Soon it is done and cooled enough to put on OUR cooling rack.  I did add a cup of semi-sweet chocolate chips 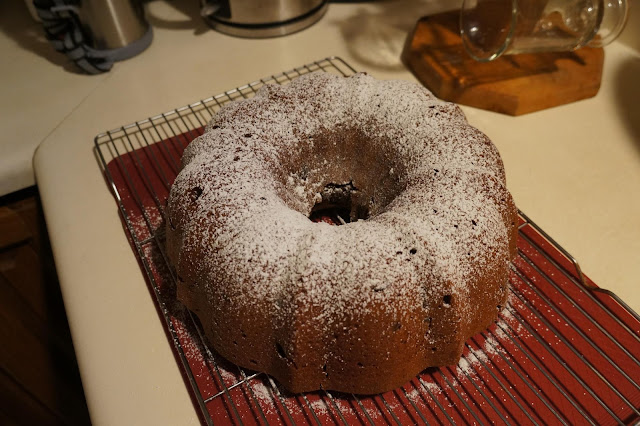 When it was cool enough I decided to give the topping a quick dusting of icing sugar.  Remember, this was on Saturday afternoon.   We were invited out for dinner on Sunday and I needed to bring something.

Of course if you make cookies, you have a chance to sample one before you give the rest away.  That way you can ensure that it meets your standards and tastes good.   It is hard to taste any cake as you have to slice the first piece and remove it before you are able to sample your creation.   I can't imagine bringing a cake with a slice removed, so the plan was to have a piece for dessert, after we had our dinner, and then make another bundt cake on Sunday morning.

Well, the magic moment of reckoning arrived and it was a bit heavy.  Definitely not something that I would be proud of, so into the garbage it went.  I looked at the recipe again and decided that the mixing order was wrong because the flour was over mixed "in my opinion" .  It needed more air bubbles.  So on Sunday morning I used the same recipe and got all of OUR appliances out again to make another one and this time I used my wire whisks 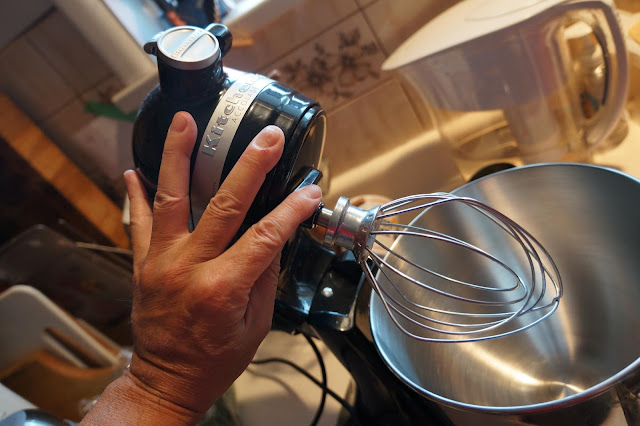 I attached the whisk hoping to create more air bubbles 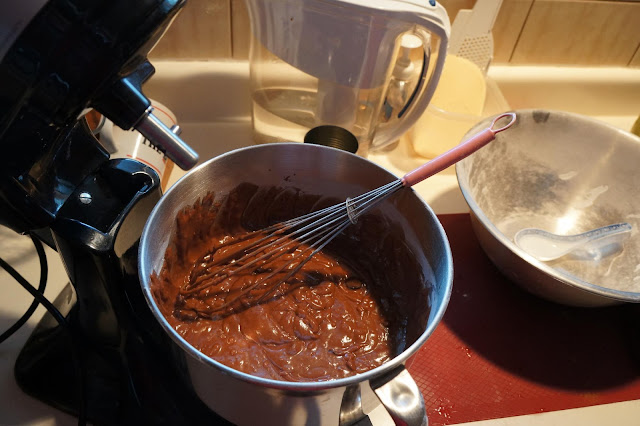 Then when the batter (liquid ingredients) was done I folded in the flour at the end, manually using another wire whisk.  This way the flour does not get beaten at all 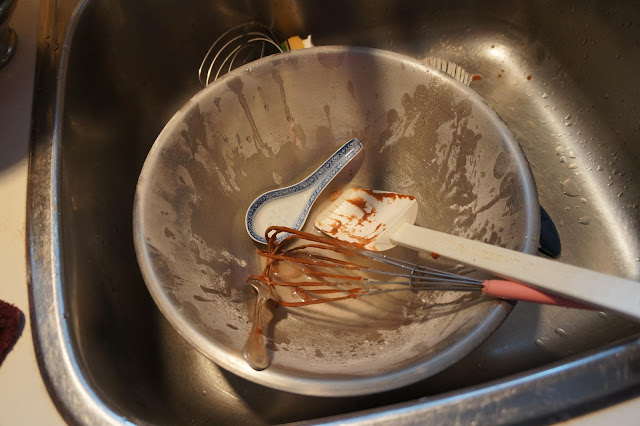 I cleaned up as my 2nd bundt was in the oven 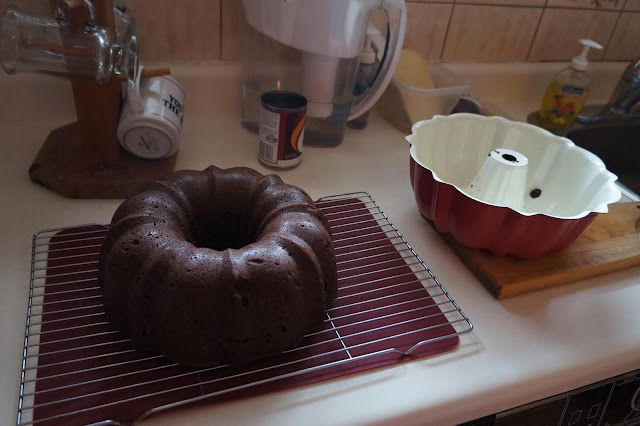 The 2nd one was not much better than the first one.  I like light and fluffy cakes, not heavy ones so I have come to the conclusion that this particular recipe is NO GOOD, it gets TWO THUMBS DOWN .  Don't believe everything you read on labels.

I still had enough time to make a 3rd cake to bring to dinner which was only 2 hours away.  I used my tried and proven recipe for Chocolate Angel Food cake which is very light but I usually use a rectangular loaf pan.  This time I used my new Bundt Pan but forgot to spray it with PAM so when it was ready I could not  remove it from the pan to put on a topping.   While things didn't work out as planned at least I didn't arrive empty handed

As per Richard's request, I am including the recipe for the Chocolate Bundt Cake.  I am now convinced that this cake was supposed to be a bit heavier/dense than what I am used to.

In an effort to minimize beating the flour I have changed the mixing order.  Add ingredients in the order listed

I think this qualifies as Vegan.   I don't see any animals in these lists
add ingredients in order listed

OPTIONAL:  If you have a sweet tooth like Richard , you can add 1 cup of semi-sweet Chocolate Chips

leave in pan for 15 minutes, then remove from pan and put on cooling rack
when cool, dust with icing sugar