for a quick ride.  This is a continuation of the previous post .   It feels like an eternity since I had ridden Nu2Me my Beemer R1200R.  After my brake flush I headed South without a destination in mind but I had things to do like grocery shopping and some carport cleanup which I cannot do on weekdays as it is dark before I get home.  As I was navigating the local roads, for some reason my mind went blank and I could not figure out how to turn off my turn signals. 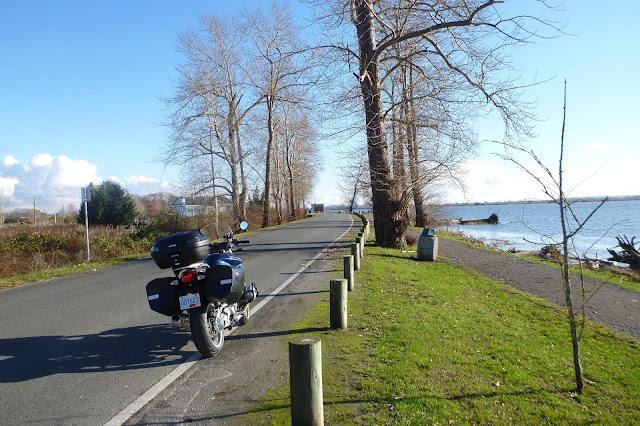 Fraser River near Steveston, BC

BMW's have a challenging turn signal arrangement.  I was trying to change lanes and I hit the left button, and then after the lane change I hit the right button but instead of the signals turning off, the right signal started blinking.   It took me a while to figure it out and after the signal lights were finally off it was just easier to not change lanes as it was just too much trouble.  I was chuckling inside my helmet as I was following this slow car ahead not wanting to change lanes.  All the other cars were passing on my left and right sides but I just hung in there at a slower pace. 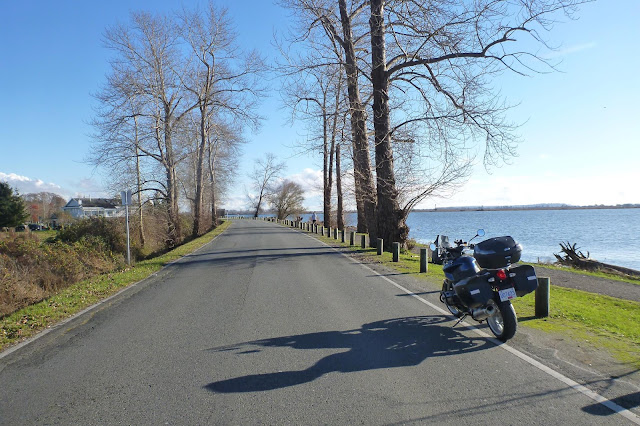 It was a pleasant 8°c (46°f) when I started out, cool but not too chilly and you could feel the warm of the sun when you were stopped.  For some reason I had ridden my Vstrom, but not the Beemer.  I find that the Vstrom is more maneuverable on slower speeds within the city.  It has better throttle response.   The "R" likes to go fast and thrives on the highway but I really haven't tested the performance of my new Michelin Pilot Road 2's.  Actually the tires have not yet been broken in.  The release compound still has to be scrubbed off so I had to be careful on my lean angles 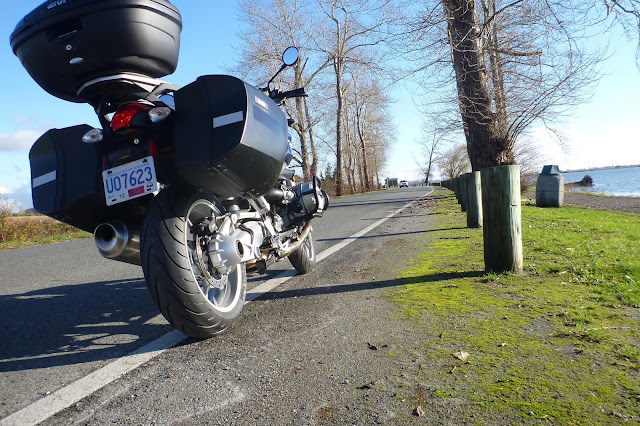 I was just enjoying the day at scenic speeds and looking for places to stop.  The traffic seems very light for a Saturday.  Everyone must be at the Black Friday sales looking for bargains.  I just couldn't help but think of how lucky we are to be on the Wet Coast of Canada where it seldom snows.  Our lowest temperatures hover around freezing during the Winter, yes we sometimes get a bit of fog and frost in the mornings, but it has usually melted off by noon.  I feel so sorry for those who live here or here . 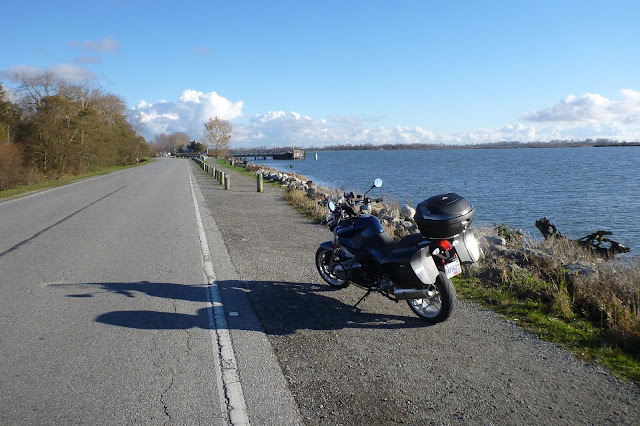 It is harder to park my Vstrom here as the side stand is too high and I don't get enough lean angle.  For my "R" (Nu2Me), I have no problems.  During the heat of the afternoon our temperatures went up to 10°c (50°f) which is much warmer than we are used to for this time of the year. 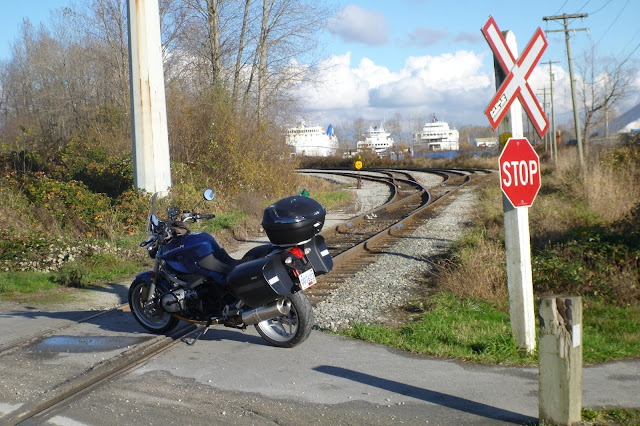 I actually had to do a U-turn and ride back for this photo.  That is our BC Ferries maintenance facilities.  I don't see any trains around so I stopped on the train tracks.   As a safety precaution I left the "engine running", just in case.

My stomach was grumbling so I took the highway back to town and for the first time since I bought Nu2Me I tried out my heated grips.  There is a switch on the right handlebar for high and higher.  I am happy that it works.  I am not so happy with the wind buffeting.  I have the low Cee Bailey windshield and I have to find a way to angle it back a bit.  Even at only 120 km/h the vibrations and noise are unbearable.  I have to look into ear plugs at our upcoming Motorcycle Show in January.  The bike was very stable at that speed and I have lots of passing power.  There was no problem merging into the traffic and watching the specks get smaller in my mirrors 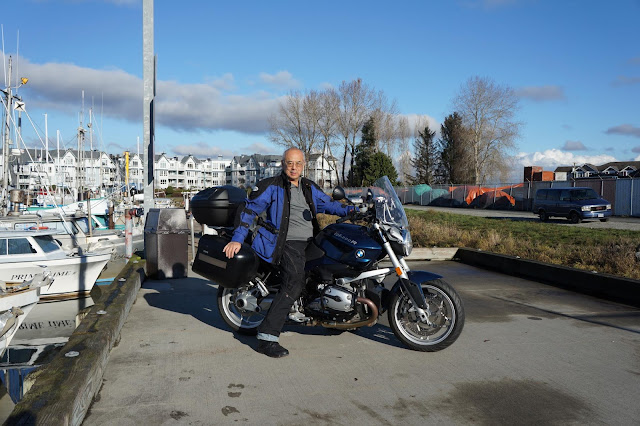 I was just taking my time and enjoying the appearance of the sunshine.  It rains here more than you can imagine and it is so depressing with the lack of colour.  Going back to Standard time only makes it worse, as it is now dark before we head home from work.  I had a few errands to do so I headed home after a quick snack with a friend 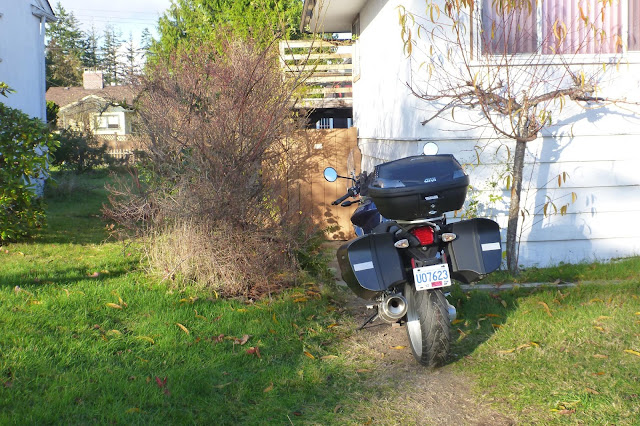 I ride my bike over the curb and prepare to roll it into my back yard on the narrow sidewalk.  I am too wide 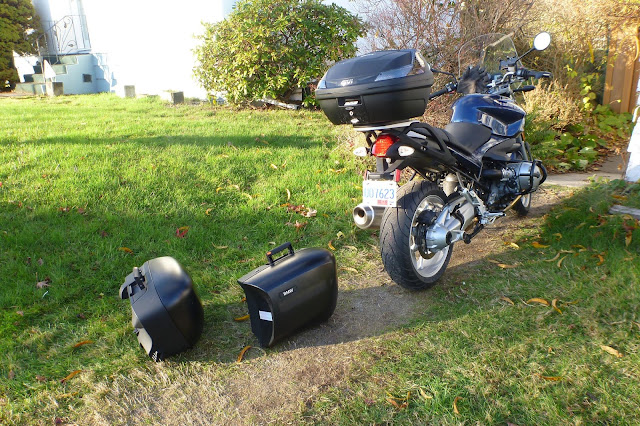 so I had to remove my luggage first 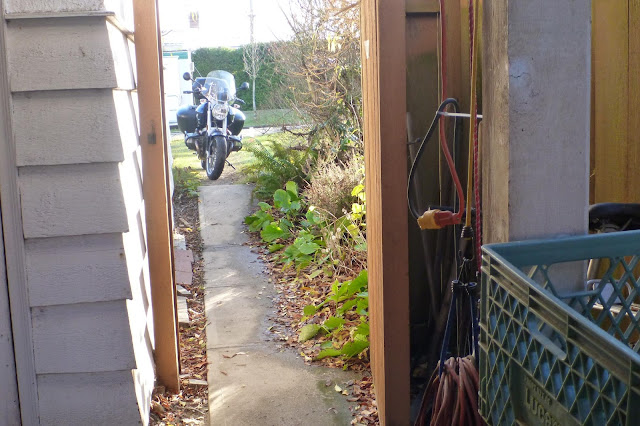 This bike is much easier to handle than my Vstrom which I need the engine to help me move it.  With Nu2Me I can push the bike all the way to it's parking spot 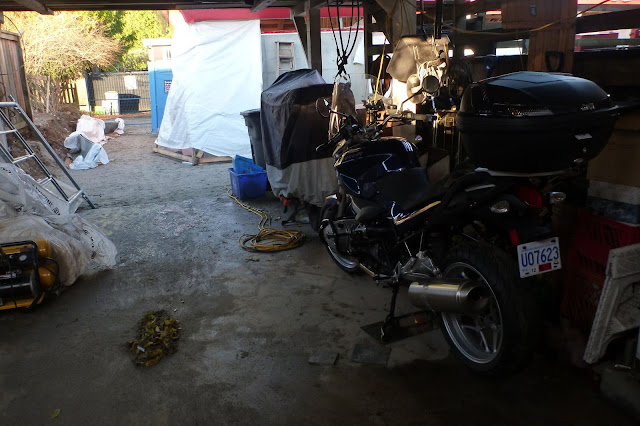 and soon it is right back to where it belongs just like my ride never happened.   My insurance will run out in about 2 weeks and then I will switch to my Vstrom which is insured for the whole year.  Insurance is very expensive here as it is run by the Government and there are no discounts for multiple vehicles.

Of course, being on a bike doesn't mean continuous riding.   Lately I have been stopping more often to relax and just enjoy my surroundings. 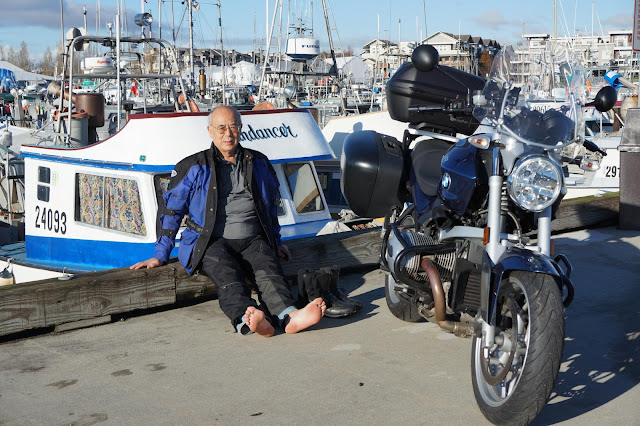 While "some" of our Eastern blogger friends may be cloaked in snow, we are still trying to hold onto Summer