G'Day mate and welcome everyone from sunny Sydney Australia for scooterbobs continuing Aussie adventures. For those of you who don't know me, my name is Steve also known as Chillertek from The Road to Nowhere blog. I have graciously been given the honour of carrying scooterbob on his continuing adventures around the globe. This is his second leg in Australia many thanks to Theo for his wonderful tour of Victoria, Australia. I hope I can keep up the high standard that the other bloggers have set for scooterbobs travels. I'm sure that Bob would be very happy with what the blogging community has done, coming together in his memory and taking little scooterbob where Bob never got to go.

For my first outing I have decided on a trip up into the Blue Mountains, which is both a popular tourist destination for visitors from around the world and it also has some great motorcycling roads so hopefully we will get to do a bit of both and have some fun along the way. If your wondering why they are called the blue mountains, then one only has to look at the photos to see why.

It is going to be a hot day today(32°C/90°F) so I decided to leave early just after 7am. I couldn't put my camelbak on as I had to put scooterbob in my backpack so fingers crossed. Heading up into the mountains early was starting to look like a bad idea as I hit fog and mist, but luckily most of it burnt off as the sun came out and it ended up being a beautiful sunny day. First stop is the 2 look outs at Wentworth falls. There was some low lying fog in Jamison Valley this morning. Amazing views up here. 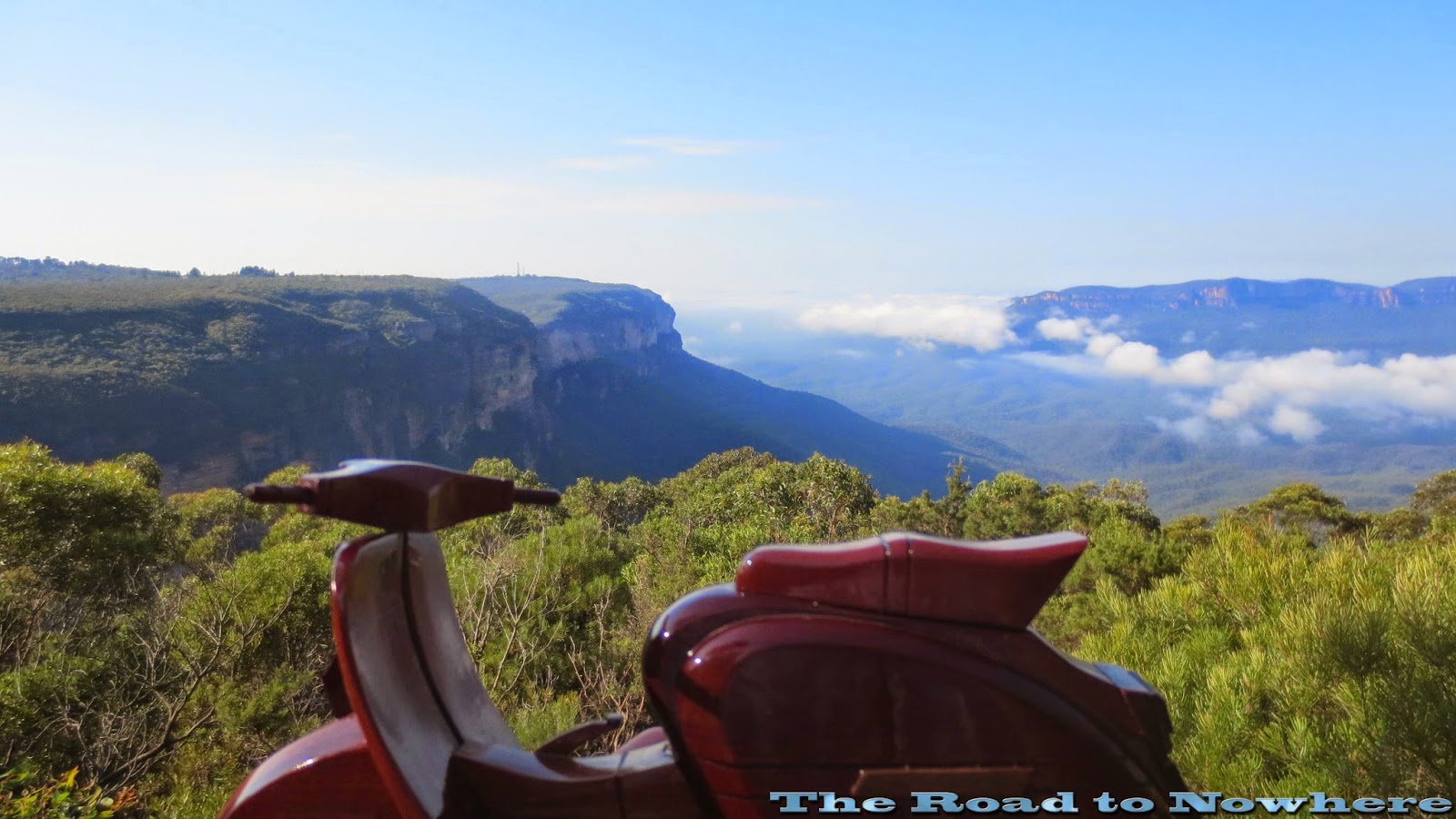 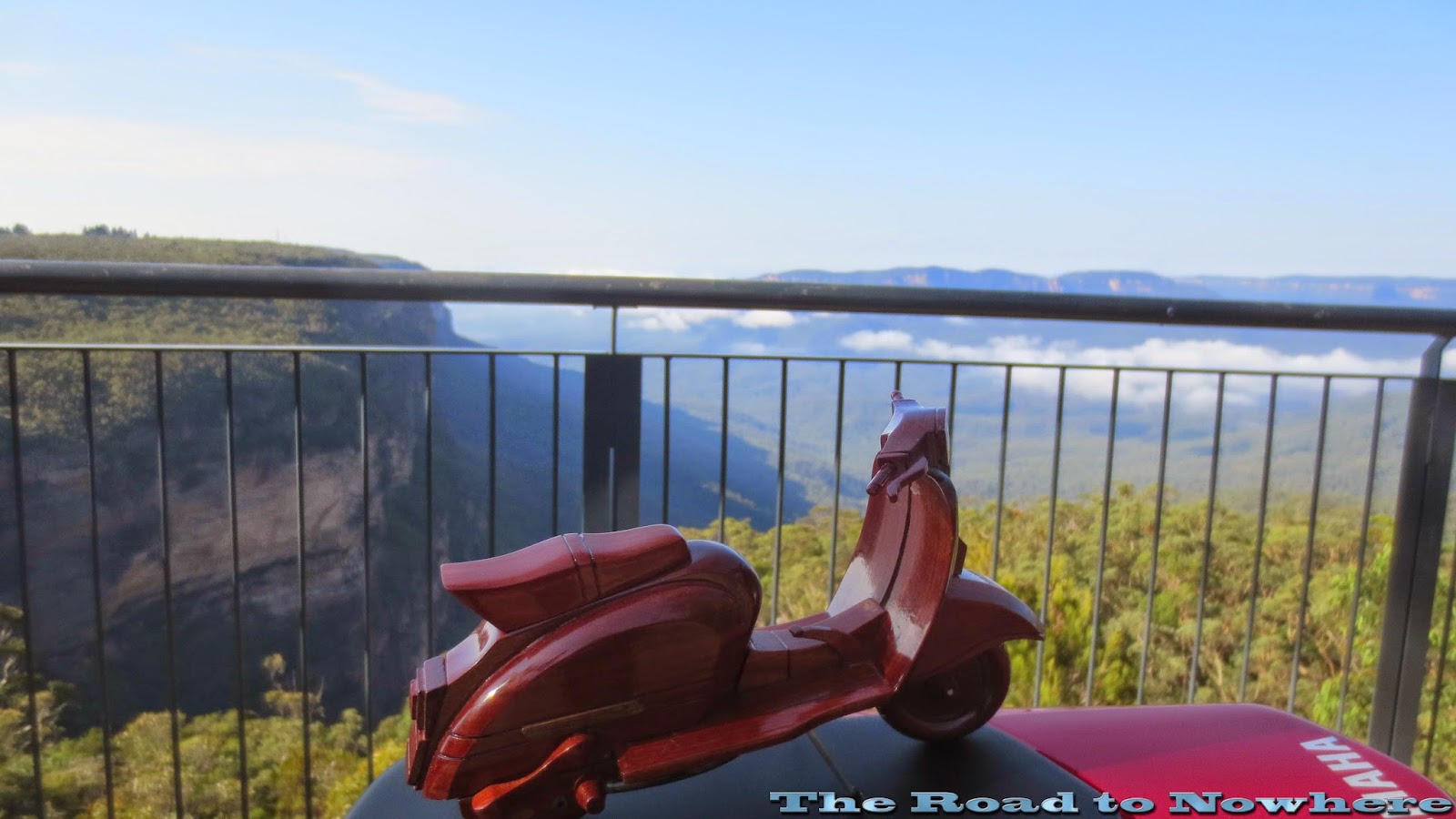 For the non Australian readers the Blue Mountains is a part of the great dividing range which runs up the east coast of Australia The blue mountains are a dissected Plateau carved out of sandstone bedrock. The mountain ranges are not very high as far as mountains are concerned and range up to around 1189m (3901 ft) and have precipices dropping away suddenly of up to 760m (2493 ft). Eucalyptus trees grow throughout the valleys of the ranges and the oil released by these into the atmosphere creates the blue haze which the mountains are named after.

I saw on google maps another lookout I hadn't visited before so I thought I'd check that one out for a different view. Unfortunately for me 4 mini bus loads of tourists had beat me to it so it was a bit hard taking photos. Those Japanese tourists are sitting on the edge of a massive drop easily a couple hundred feet. 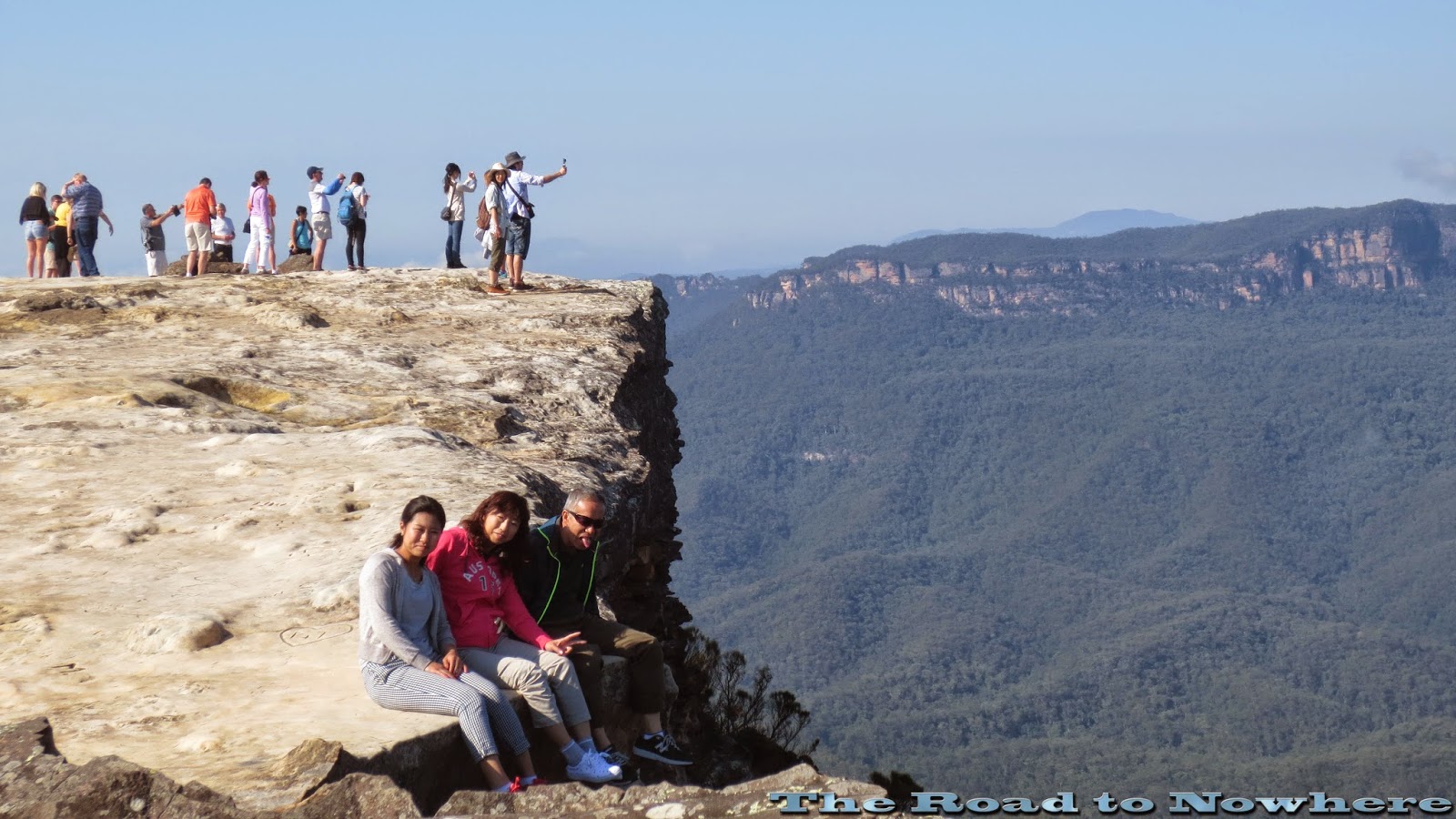 I was a little worried about bob in that last shot above as I thought he might roll off the rock backwards, he was sitting precariously. Lucky he didn't as there would have been no way of recovering him if he went off the edge. I moved on from here and headed around towards Echo point which is the home of the 3 sisters. 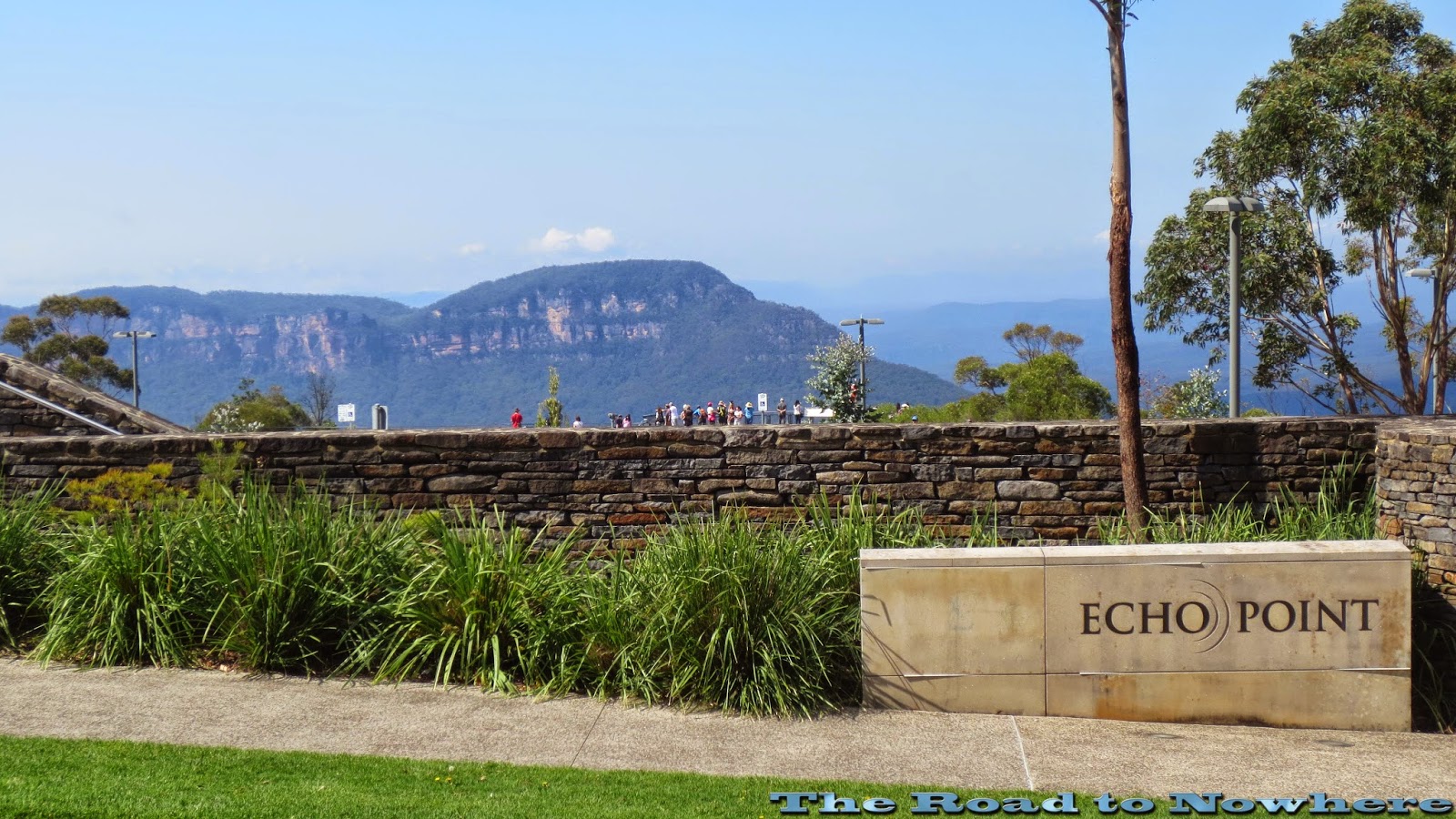 The three sisters is essentially a unusual rock formation. The character of the Three Sisters changes throughout the day and throughout the seasons as the sunlight brings out the magnificent colours. The Three Sisters is also floodlit until around 11pm each evening looking simply spectacular set against the black background of the night sky.

After bidding the 3 sisters good bye I followed the Blue Mountains Drive around the cliff tops and passed by scenic world which is basically another place to fleece the tourists of their hard earned. I stopped by eagle hawk lookout again with spectacular views of the valley and the 3 sisters. 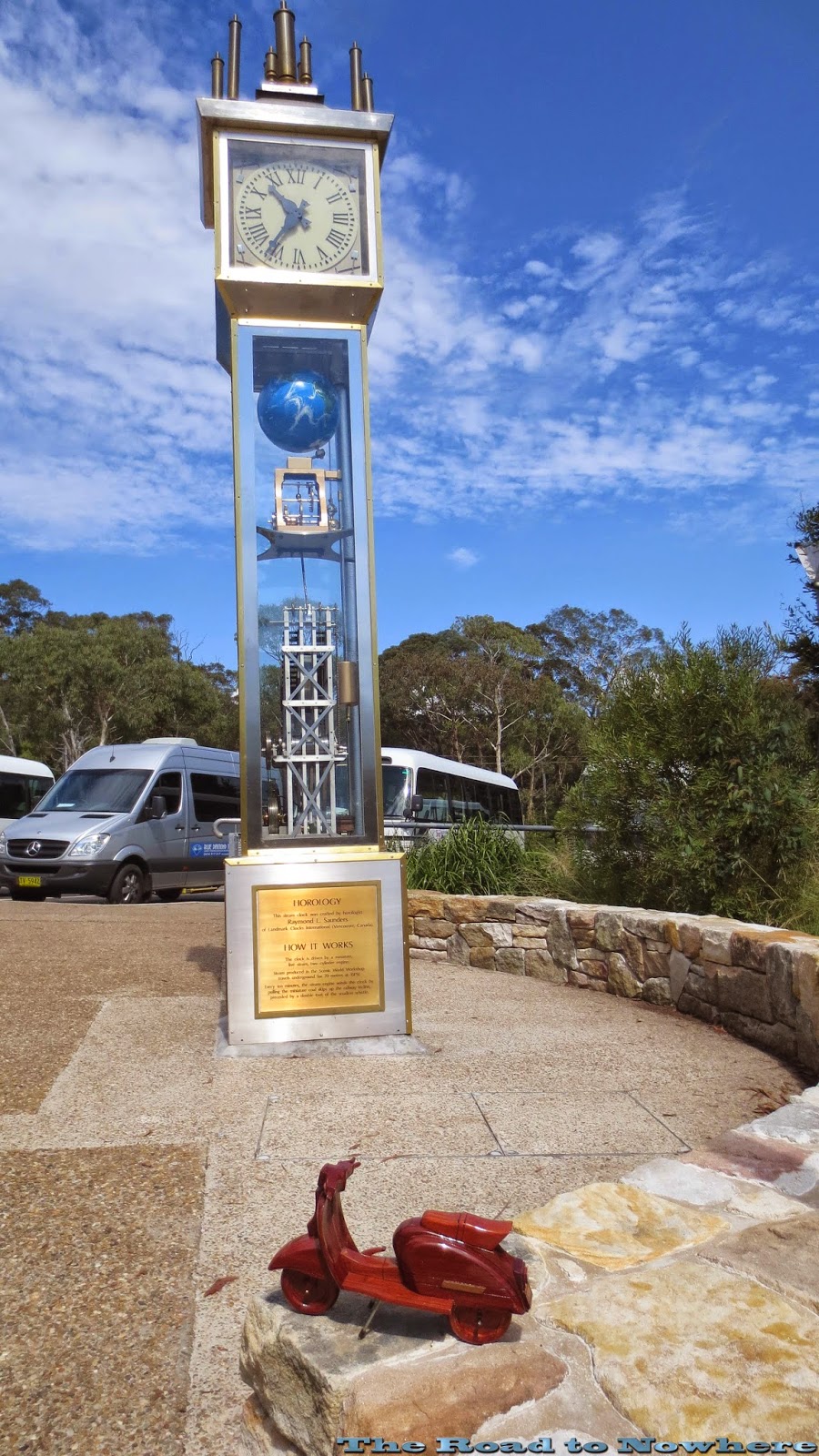 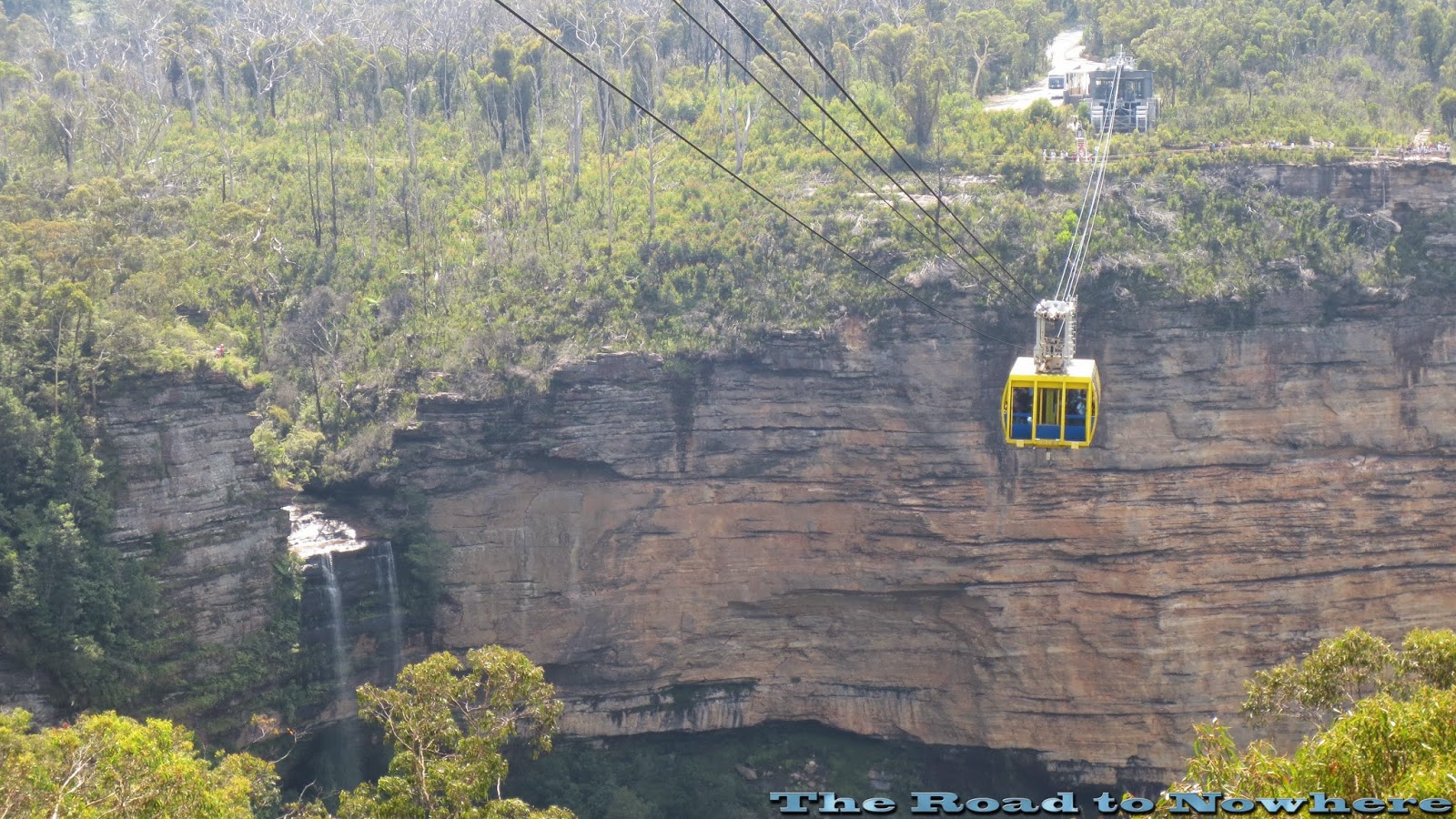 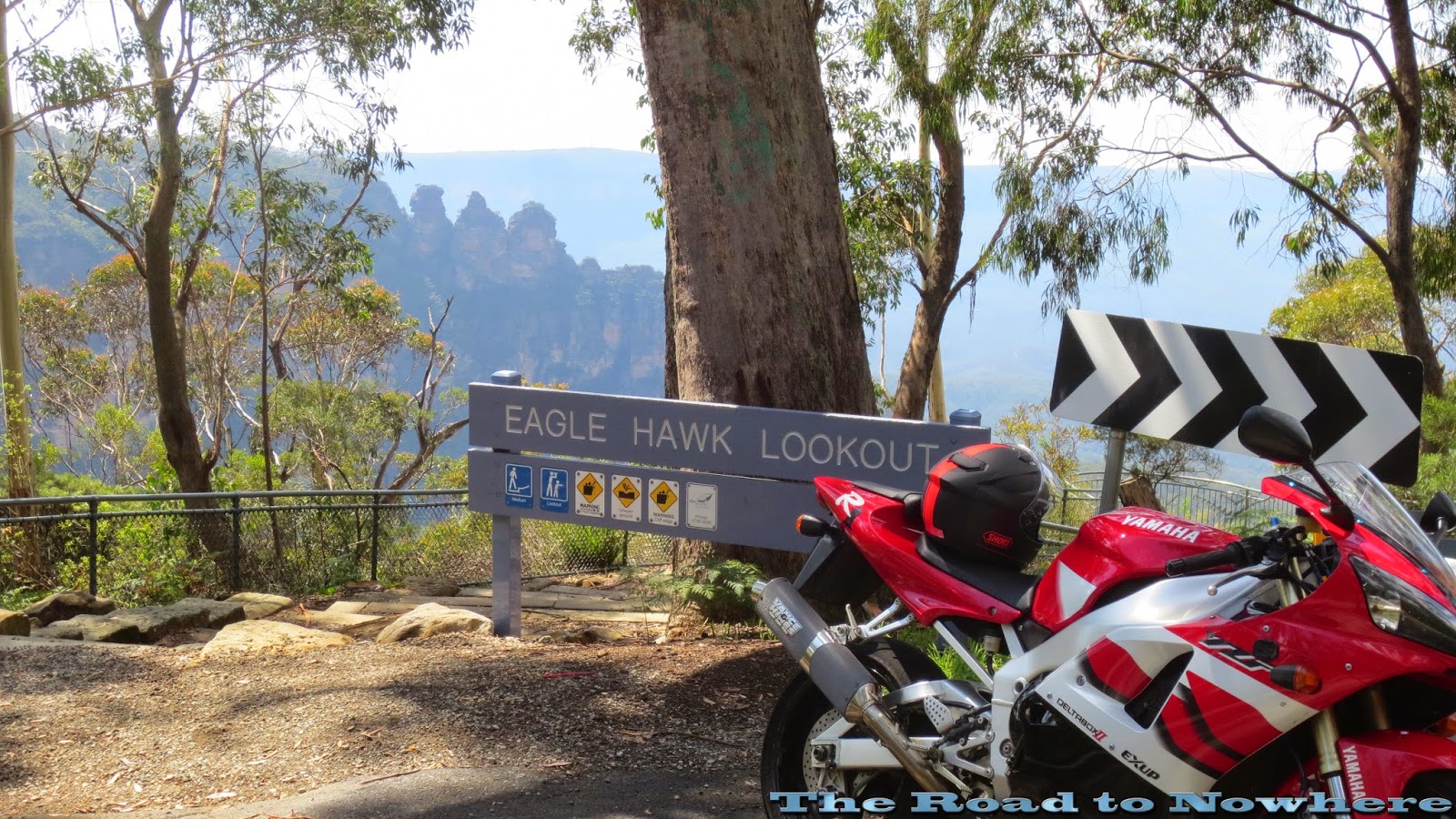 I'm sure Bob would have loved to visit the blue mountains. There are plenty of little places to visit up here. Fantastic coffee shops, cafes and antique stores and those magnificent views everywhere. I moved along a bit to check out some more views. It was getting very hot now especially seeing as I was stop/starting a lot because I was taking so many photos. I was also getting hungry and thirsty. Time to find something to eat after one more picture. 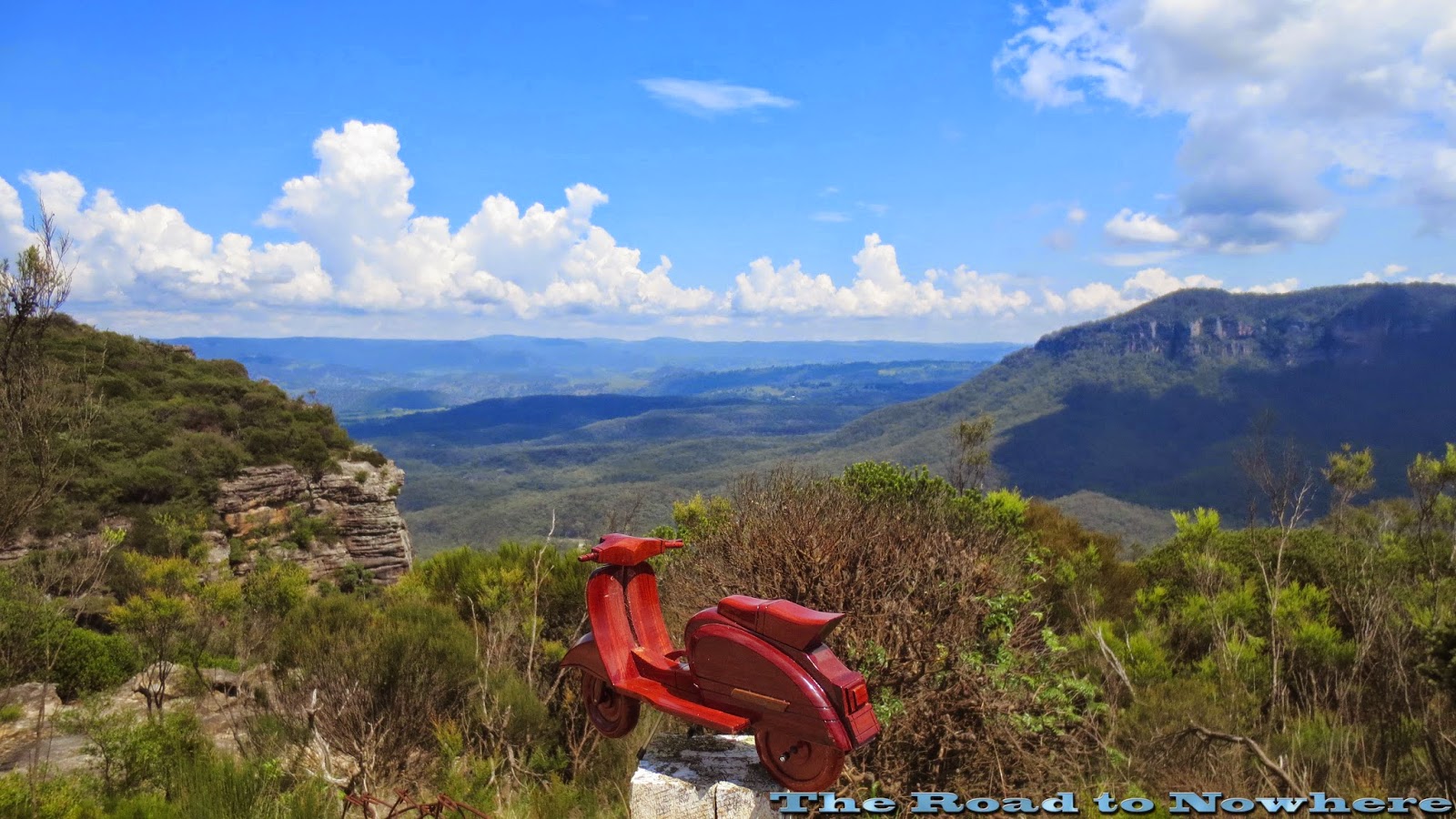 I decided to stop in at Mountain pies and get a coffee and a pie. They have won awards with their pies. Again for the non aussie readers our aussie pie's are a pastry base filled with meat and cooked in the oven. I ordered a pepper steak pie. It had chunks of beef and actually had green pepper corns inside. Beautiful, washed down with a coffee. If your ever in the area stop in and try one of their pies. They are fantastic. 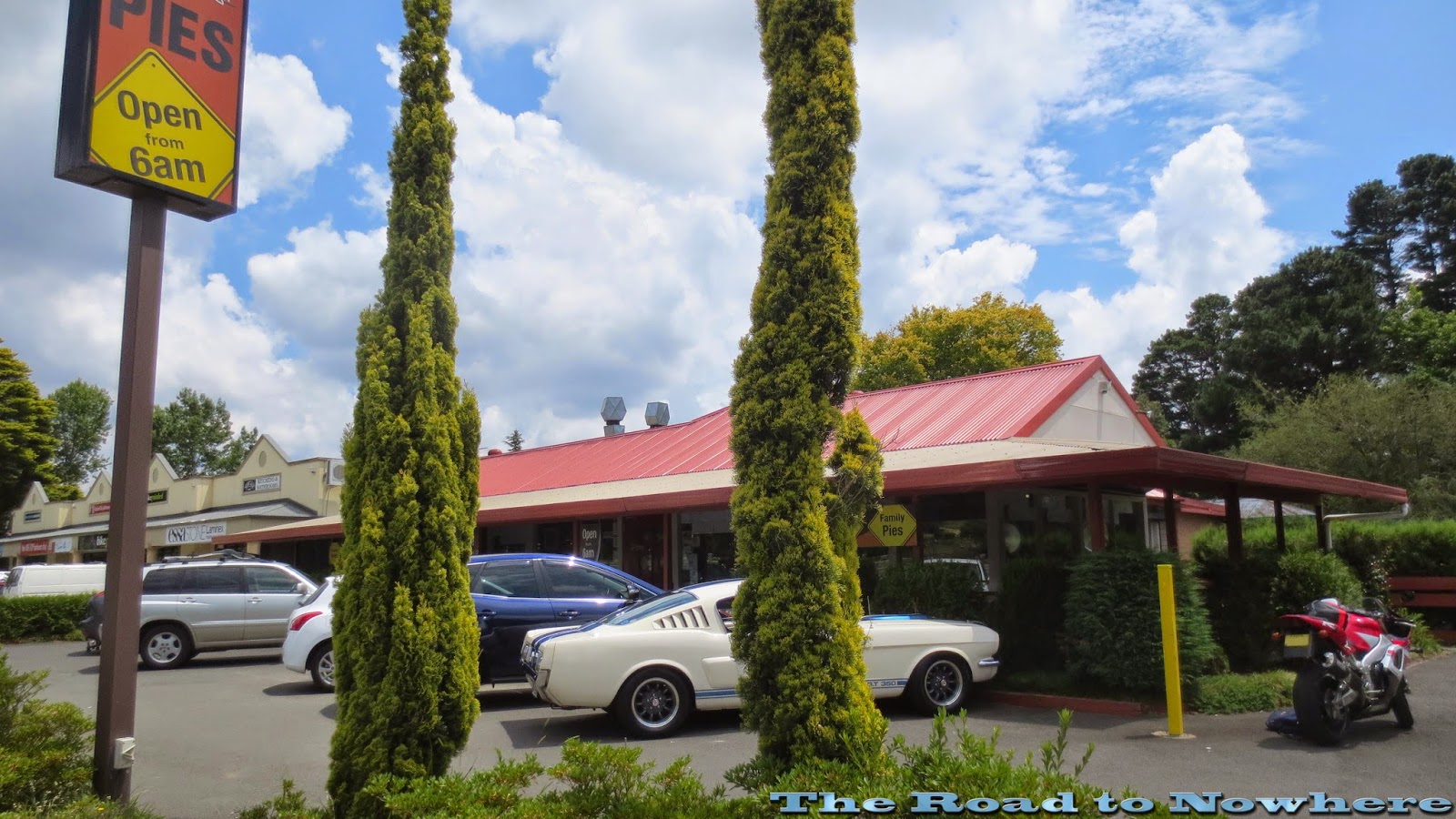 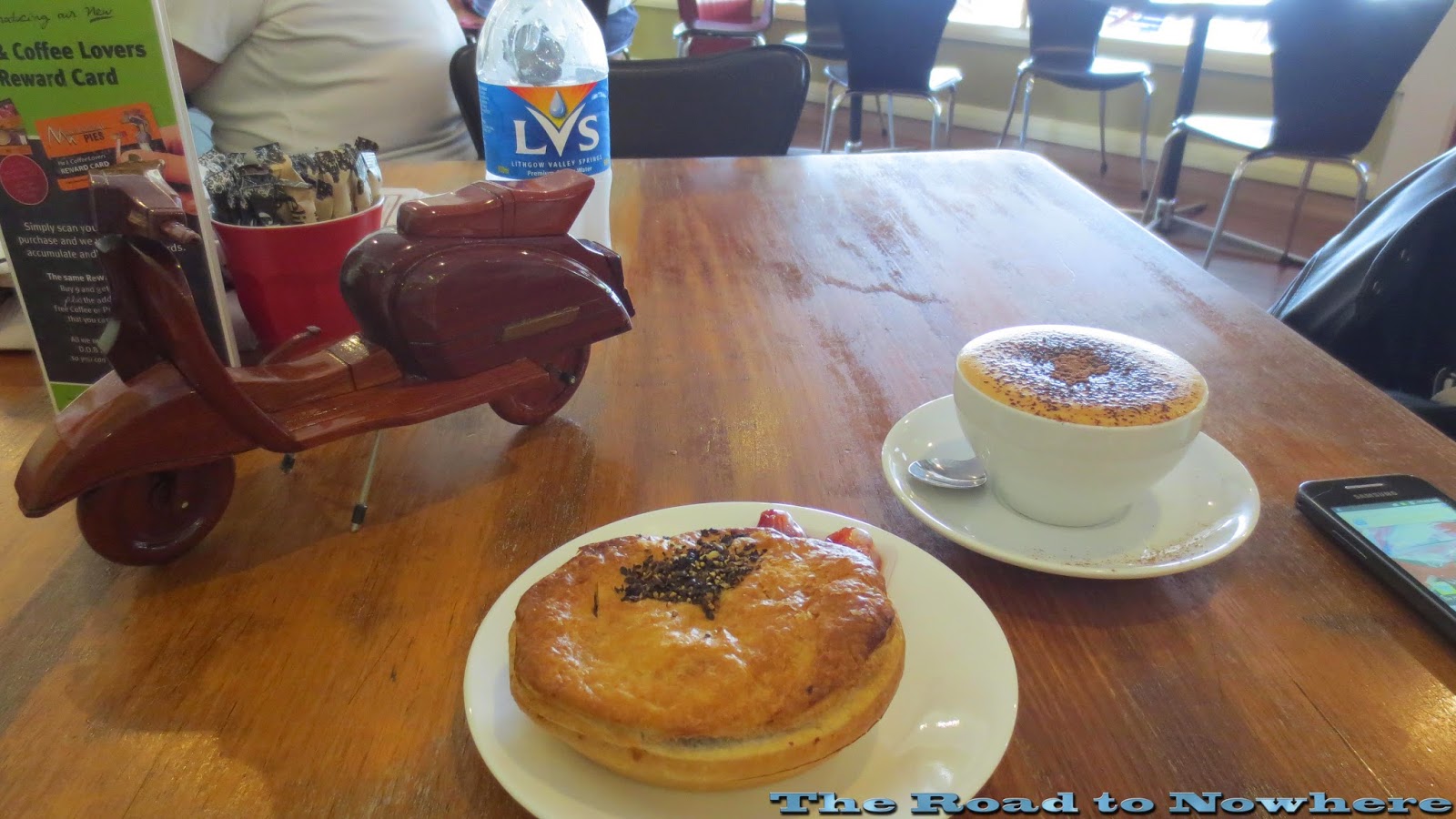 With lunch finished it was time for me and scooterbob to head home back to Sydney. It was so hot today and I missed my camelbak dearly in the heat but still it was a great ride and a fantastic day out.