ScooterBob and Fiona on Mount Evans

There had been a couple of notices from the Colorado Department of Transportation (CDOT) telling folks that the road to Mount Evans, aka Colorado Highway 5, had been closed due to adverse weather this past week.

Snow and high winds most likely.  You could see a thin covering of snow on Mount Evans from the metro Denver area.

Yesterday, Saturday the 27th of August, I went with Fiona and ScooterBob to introduce them both to the highest paved highway in North America.

Note: We never did make it to the summit parking lot, apparently a lot of cagers also had the idea to go visit Mount Evans yesterday; and there was a long line to even enter the parking lot.  So, sorry, no picture of either ScooterBob or Fiona by the summit sign at 14,260 Feet (4346 Meters).

I rode Fiona via US285 to Morrison and from there it was Bear Creek Canyon Road or CO Hwy 74 to Evergreen and Bergen Park to pick up the eastern end of Squaw Pass Road.  Took longer than usual to get there since I'm still "breaking in" the rebuilt gearbox on Fiona; so limited to 40 mph.  The route I took was mostly 45 mph or under with a couple of short highway stretches.

We would try twice to reach the summit, but the mass of cagers just precluded that notion, especially when riding an air-cooled motorcycle.  Though it was cool near the summit, it wasn't cool enough to prevent the engine on Fiona from possibly overheating so I just took pictures from just short of the summit. 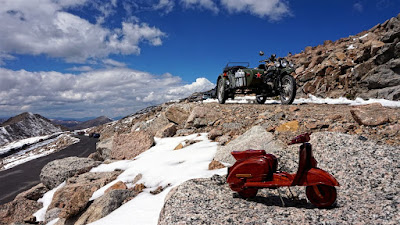 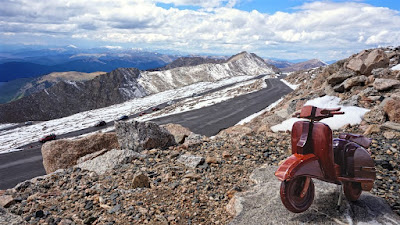 The peak in the background is Mount Bierstadt I believe 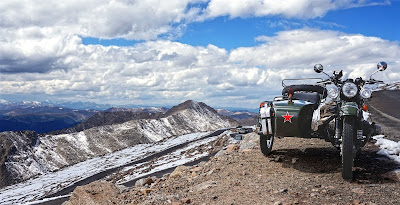 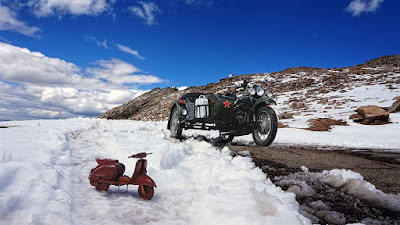 A little snow for ScooterBob to experience. 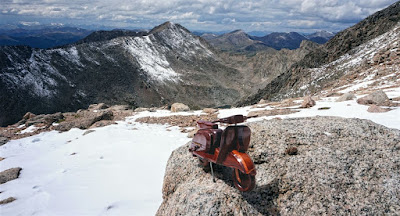 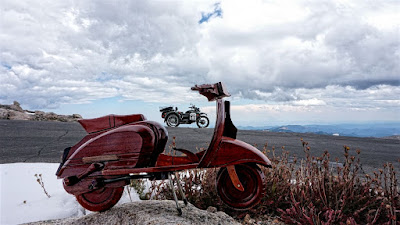 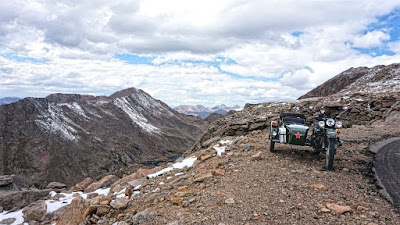 As you ride Mount Evans Road, you get several views of nearby
Mount Bierstadt. 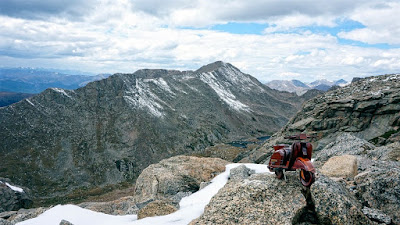 You can just see part of Abyss Lake, located between the peaks
of Mt Bierstadt and Mount Evans. 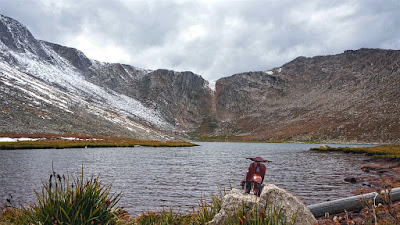 On the shores of Summit Lake 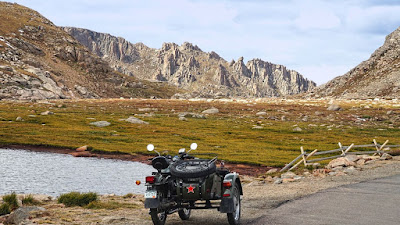 Looking towards the rock formations one can hike to from the
Summit Lake parking lot.  I've not done so yet.... 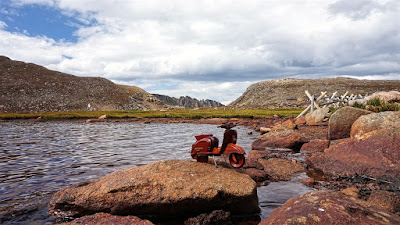 This lake is apparently stocked with Rainbow Trout.
Fishing at 12,840 Feet (3913 Meters) 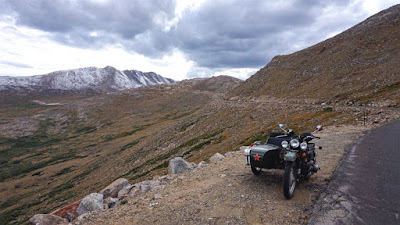 One last look back towards the summit 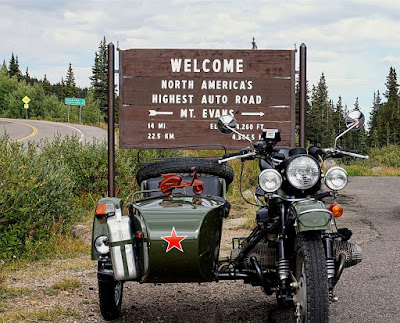 Here's a picture of the sign before the fee station at the Mount Evans Road.

Couldn't quite "see forever" today, but not bad.

Fiona did great, though I did have to loosen up the clutch some as I was coming off the mountain.  She reached the next oil flush mark as we neared home so I'll be changing out the oil today.

Note about the fees for Mount Evans Road.  It's free if you do not use any of the fee areas up on the mountain AND don't go into the summit parking lot.  I should have asked for my $3 back today.  :)

Posted by redlegsrides at 9:19 AM 6 comments:

Around this time of year, there's usually a field or two somewhat nearby to me with a nice display of sunflowers to use as background for pictures.

This year, the field nearest to me that I could find was near the I-70 Superslab exit to the town of Bennett.

Fiona, ScooterBob and I got there mid-Sunday morning yesterday and the field was looking rather good even though the sunflowers were kind of droopy.  Whether from the increasing heat of the day or just the size/weight of the sunflowers; I don't know, but they still looked pretty good. 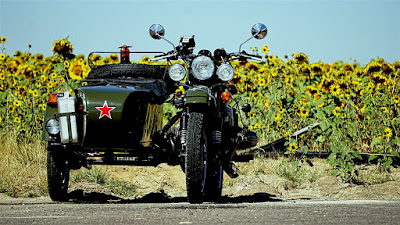 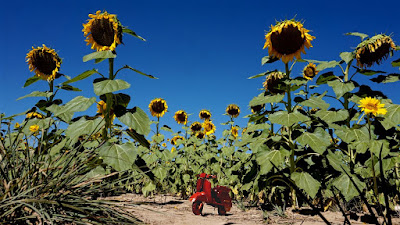 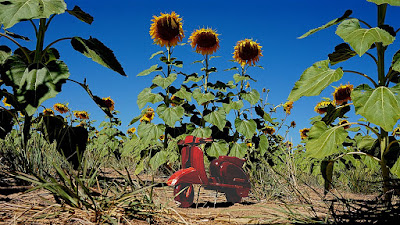 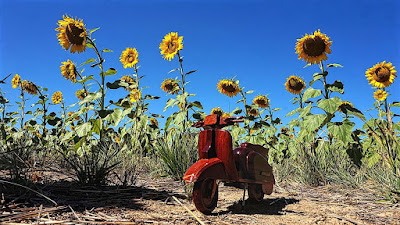 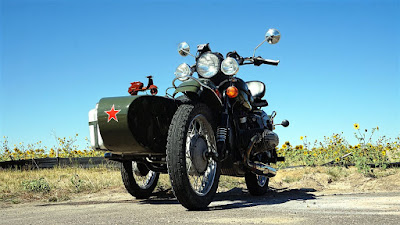 Posted by redlegsrides at 4:53 PM 3 comments:

It's become my turn to play host and tour guide for ScooterBob, a wooden scooter that's been making its way around both the moto-blogger world and the real world.Done as a way to remember BobScoot, aka Bob Leong, one of the original moto-bloggers, who passed away back August of 2014 while traveling with his lovely wife Yvonne; we pass along ScooterBob, documenting the travels that we'd like to have ridden with Bob had he made it out our way.Link to the start of this story:  ScooterBob hits the road, Jack!ScooterBob, and Bob's memory, have covered a lot of the globe.  Starting from Vancouver, Canada (Bob's home town), its gone from Key, West, FL to the Black Forest in Germany, Austria and France.  From there it was a long plane ride all the way to Australia for ScooterBob where he'd finish out 2014.2015 would be spent partly in the Pacific region.  After seeing quite a bit of the Sydney, Australia area and its surroundings, ScooterBob then made the short hop over to New Zealand for more explorations of these islands while hosted by two separate moto-bloggers.By May, ScooterBob had returned to Europe and the care of  UK moto-bloggers, visiting folks in England and Wales.The start of 2016 found ScooterBob back in Florida, exploring the sights of  near Jacksonville, Florida and even a side trip into Georgia.  Staying in Florida, Scooterbob was then hosted by a moto-blogger in Tampa during March and April and saw the sights there.End of April found ScooterBob now in Virginia and undergoing some repairs to some damages sustained during his world travels.  After exploring Virginia, it was then time to go to New England to visit with yet another moto-blogger.July 2016 found ScooterBob starting in New Hampshire and ending up several states away in Minnesota!After ScooterBob finished exploring Minnesota and the surrounding area, he would be sent to me, here in the great State of Colorado. 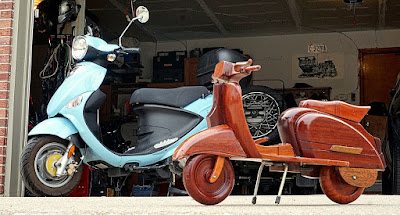 Today, I thought I'd show ScooterBob the sights of Red Rocks Park, the same place I took BobSkoot to in Valencia, my 2011 Ural Sidecar Rig back in August of 2013.  Link to that visit by Bob. 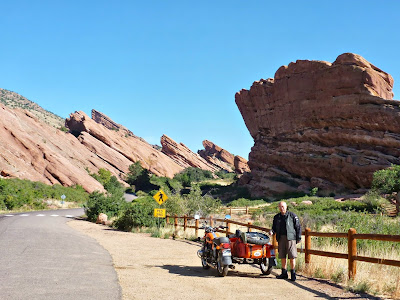 From the above link posting, here's Bob at Creation Valley. 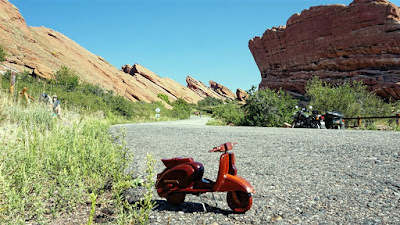 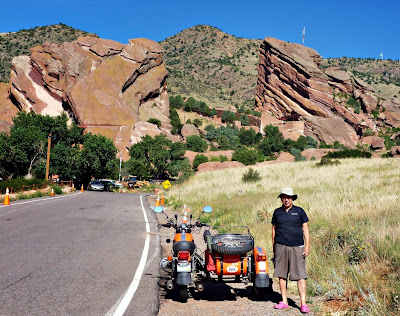 Bob and Valencia in front of the Amphitheater at Red Rocks 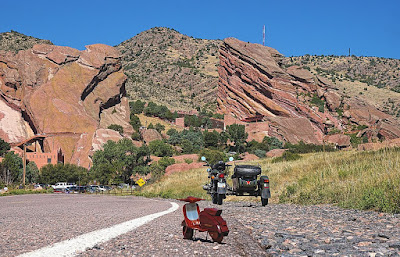 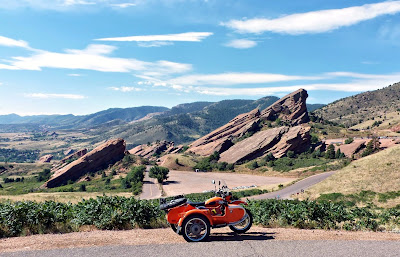 ScooterBob of the West! 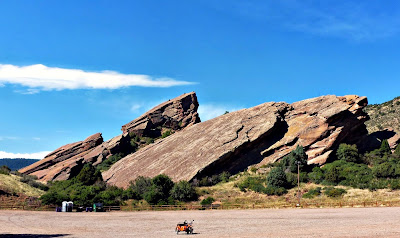 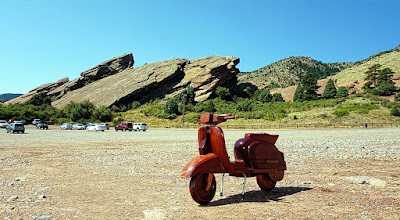 As you saw, I was riding Fiona, my '99 Ural Patrol with a Beemer Engine.  I'm still "breaking in" the rebuilt gearbox on her so she's limited to speeds below 40 mph.  Explorations of Colorado destinations further than Red Rocks will require the use of either Scarlett, my 2014 Ural Patrol or Brigitta, my '87 R80 Beemer Airhead.

ScooterBob is in Colorado.

Just a short entry to announce ScooterBob's safe arrive in the great state of Colorado. 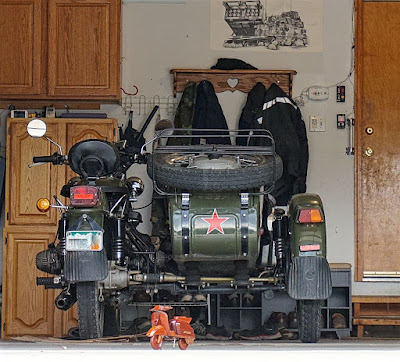 It's been enjoyable and rewarding; a true honor to host the wooden scooter here in flyover land.  Another few weeks around here and there would be a rally or two to share but that would not be fair to those hosts next in line.

Travel safe and well SK, the memories are already treasured! 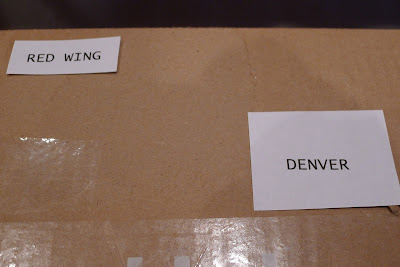