Thanks to many of you, ScooterBob has enjoyed some amazing adventures all around this wide, wonderful world of ours. He's earned a few scars in the process as any true adventure rider would. Some are quite serious.

I must admit, I had to chuckle when I found the little pouch of parts amongst the other bling ScooterBob has collected during his travels.

The weather here hasn't been ideal, and I haven't quite gotten motivated enough to venture out on two wheels in the gloom. So, today, I decided to send ScooterBob out for repairs.

He needs the brief break. No pun intended.

Have no fear, though. My Hubby is a magician with wood.

After carefully examining the pieces, Hubby said, "Well, he's not a total loss. I can fix him."

ScooterBob may not look perfect when finished, but the bike will be sound. He'll be able to complete his journey and enjoy more visits with friends. What more could a moto-adventurer ask for? :-)

I'll let y'all know when the surgery is complete.

Some of you may roll your eyes at this post, but I'm supposed to show ScooterBob around just like I would have done with Bob, right? That's what I have been doing. LOL.

Yesterday, I took him along to meet one of Warrenton's local celebrities.

Kelly Ann Richardson and her husband, Andrew, own Kelly Ann's Quilting. They've been in business for 10 years and, in 2015, were featured in Quilt Sampler Magazine.

Now, if you are not into quilting, which I suspect many of you are NOT, being featured in Quilt Sampler is a HUGE deal. Really. Kelly Ann has a lot to be proud of.

The shop is actually much bigger than it looks from the outside, and it's well-stocked with everything one needs to make a quilt. It's staffed by some pretty awesome people, too. (That's not a very flattering picture. It's actually much cuter in person.)

I am proud to call Kelly Ann a friend. Andrew, too. Kelly Ann has been following along on Instagram and my blog as I traipse around with ScooterBob in tow, photographing him in various locations, so she was quite tickled to actually meet him.

And more than happy to pose for this picture. :-)
Be patient folks. I hope to get out on the road with ScooterBob soon. If only I didn't have to work for a living!
Posted by ToadMama at 10:01 AM 12 comments:

As I said at the end of my last post, we are back at home in Virginia. Hubby and I were both pretty tired on Monday. Yesterday was better. So much better, in fact, that I decided to take ScooterBob along on my nightly walk with the girls.

Just so we're clear, "the girls" are my two dogs, not two other things some women refer to with the same name. I was slightly embarrassed once when I asked a new male co-worker if he'd like to see some pictures of my girls. LOL.

Bob seemed to enjoy the pictures I often shared of my town. And hinted often that he'd love to come for a visit.

Warrenton is a smallish town -- about 9,900 people -- in Fauquier County, situated in the northern piedmont region of Virginia. It's west and slightly south of Washington, DC, about halfway between DC and the Shenandoah Mountains.

Hubby and I moved here in October 2011 from Central Maryland. The town sits right between crazy-busy and overpopulated Northern Virginia (DC suburbs) on the east and rural Virginia (including the Shenandoah Valley) to the west. We both think it's the perfect location for us right now, as lots of fabulous motorcycle roads are mere minutes from the downtown area in which we live. Downtown Warrenton is a historic district known locally as Old Town Warrenton (aka OTW).

It's a great place to stroll in the evenings, too, which my girls LOVE.

That's an old picture of mine. There's currently a banner across the front of the Old Courthouse advertising some local event. It's one of my favorite spots here in town. According to the Fauquier Historical Society...


The Old Courthouse was built in 1890 after fires destroyed earlier earlier courthouses in 1790, 1819 and 1854. The site was chosen in 1790 by Richard Henry Lee because it was the highest point in town. The current courthouse is a replica of the 1854 building which was styled after the Parthenon in Athens.

There's quite a bit of history here. I'll include a few links in case you are interested.


John Marshall is one of Fauquier County's famous native sons.

During the Civil War, Warrenton was near the scene of battles and skirmishes during which the churches and schools were used as hospitals, frequently occupied by Federal troops, Warrenton was the object of raids by Colonel John S. Mosby, known as the "Gray Ghost," who later made his home there and practiced law in the California Building across Court Street. That monument to Mosby stands beside the Old Courthouse. He is buried in the Warrenton cemetery.

The Old Jail Museum is located in what used to be, you guessed it, the old jail.

Another of my favorite buildings in town is the Warren Green Hotel, which is now county offices. It's on Hotel Street behind the Old Courthouse and Old Jail Museum.


...originally built on the site of the Norris Tavern in 1819, [it] was rebuilt following fire in 1876. Gen. Lafayette was given a banquet in 1825 with 6,000 of Fauquier's population cheering him. President James Monroe and a large company of distinguished men, were served an "elegant repast" here; Andrew Jackson stayed here; Henry Clay declared for the Presidency here; Gen. George McClellan said farewell to his troops in 1862, after being relieved of his command by President Lincoln; Theodore Roosevelt dined here; Wallis Warfield, the future Duchess of Windsor, spent a year here in 1927 waiting for her first divorce.

There are a bunch of daffodils on the east lawn of The Warren Green, but they're already finished blooming for the year.

From there, we strolled down to the Warrenton Branch Greenway, an old railroad bed turned a paved bicycle/walking path. It's only a couple of blocks from my house, and is currently about a mile and a half long. It'll be extended one day.

And that concludes the photos from our stroll.

If you'd like to see more pics I have captured and collected in and around downtown, you can visit my Old Town Warrenton album on Flickr.

I'm glad I finally got to show Bob around my town. It may have only been ScooterBob with me physically, but I'm pretty sure Bob was along for and enjoyed the entire trek.
Posted by ToadMama at 9:48 AM 11 comments:

Saturday was our last day in Washington. The morning was booked solid for Hubby and I as we were needed to chauffeur grand kids to and from sporting events.

Hubby had to have Joey, our youngest grandson, to the baseball field in neighboring Puyallup by 7:30. I was responsible for getting Brianna, our granddaughter, to the team bus by 9:00 for an 11:00 game and picking her up from the field in Tacoma where she was scheduled to play.

After I dropped her at the bus, I drove to Puyallup to watch most of Joey's baseball game. Poor Hubby was frozen by the time I arrived.


After the game, I stayed long enough for this pic with my cute grandson...

Before I continue, I have to warn those of you who don't know me very well that I like roadside oddities. Muffler Men are a particular favorite of mine. Not everyone shares this interest of mine. Bob did.

In fact, in July 2014, Bob commented on a post of mine, which featured a Muffler Man in Texas, saying...


"We don’t have any muffler men here. I have never seen one, perhaps one day I may stumble upon one."

I wonder if landing on the shoe of a real, honest-to-God Muffler Man counts as a "stumble"?

Do y'all think Bob would have enjoyed seeing this guy or what?

Thanks to RoadsideAmerica.com, I knew exactly where to find the Muffler Man. I figured I'd check to see if there was anything else worthwhile visiting in the very limited amount of time I had. There was! So on we scurried.

But first, I saw a very interesting piece of yard art I just HAD to capture.

Sadly, I didn't make note of the location.

Our next stop was extra-special. Not only was it "one of the world's largest buildings shaped like a coffee pot," it was named Bob's Java Jive.


Now, I'm pretty sure Bob would've gotten a big chuckle out of that one.

After that, it was off to Brianna's lacrosse game, which was at Stadium High School, according to the info I'd been given (yes, I got the actual address).

What kind of high school is that!?!

According to this Wikipedia post, the school was built in the early 1900s and is an historic landmark.

That's a pretty nice view, if you ask me. The body of water is Commencement Bay (part of Puget Sound).

Yes, I did watch a bit of the game, but I know NOTHING about lacrosse. LOL.

After the game, I had to scurry to meet up with Brianna. They won the game 15-14 in the final minutes (after being down 10-4 in the first half). 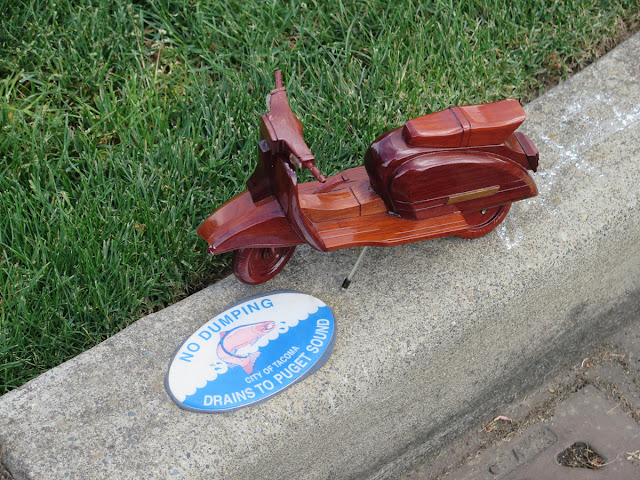 ...just to prove he really was in Tacoma, Washington.

We're back in Virginia now. There's no telling what sights ole ScooterBob will see next.
Posted by ToadMama at 10:12 AM 13 comments: 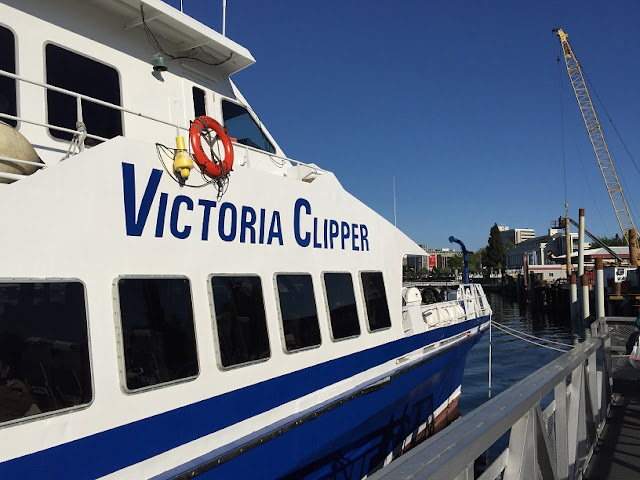 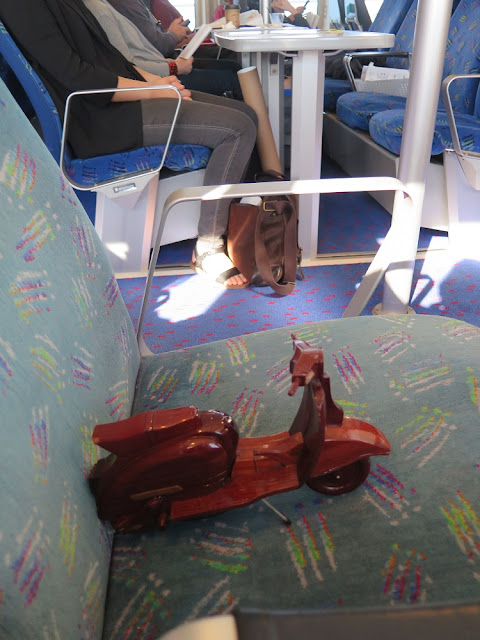 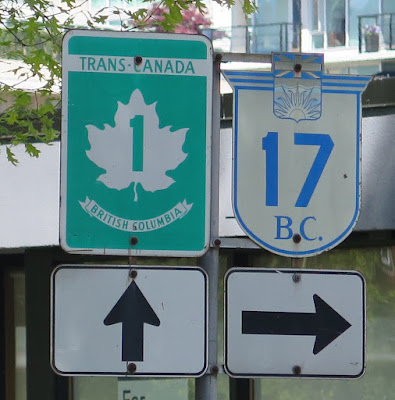 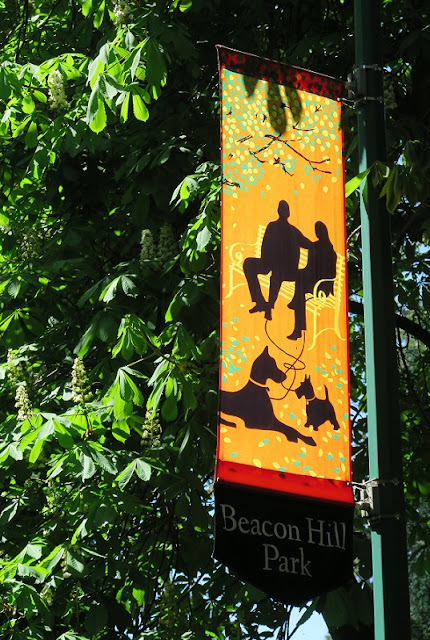 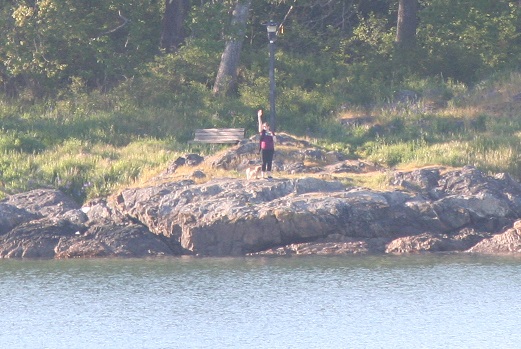