A trip to Strasbourg, France sounded like an excellent plan. The fog had lifted, and the sun was out. It didn't have its summer strength though, temps were rather nippy out there. We grabbed ol' ScooterBob, and hit the road to France.

After an uneventful ride on major roads we reached the city center and parked our Vespa adjacent to the pedestrian zone. It wasn't quite legal but due to lack of parking spots it usually gets tolerated. And we doubted that the officials would bother about two innocent little scoots. At Cafe Bistrot & Chocolat we found what we were looking for. Vegan! Vegetarian! Gluten free! All day brunch! 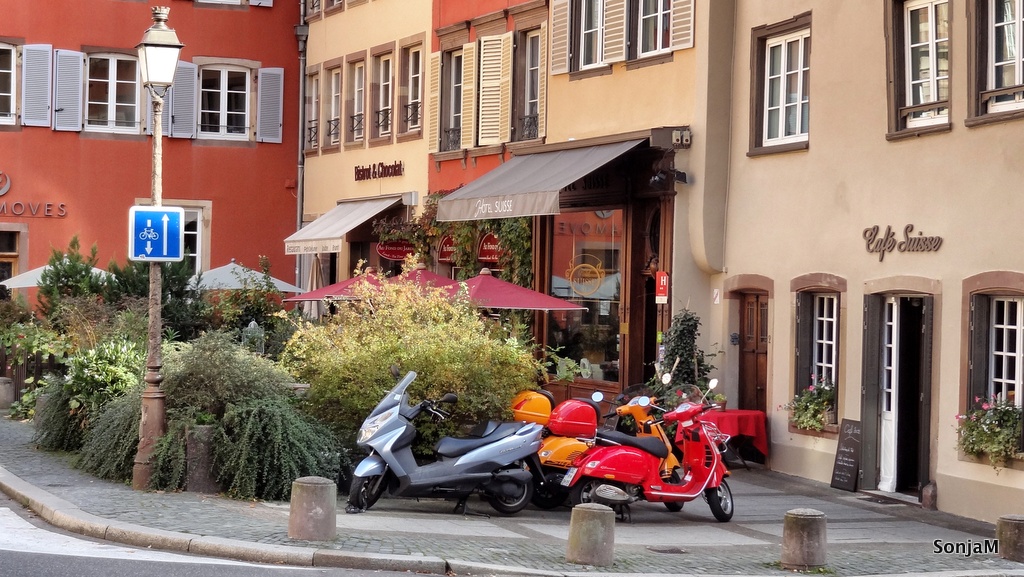 After this delicious meal we showed ScooterBob the sights of Strasbourg. We put it right in front of the museum Rohan Palace. Notice that there are no people present. As a matter of fact the visitors were considerate enough to wait until we had finished with the wooden scooter's photo session. Some of them might have thought, it was an experimental art project of sorts. 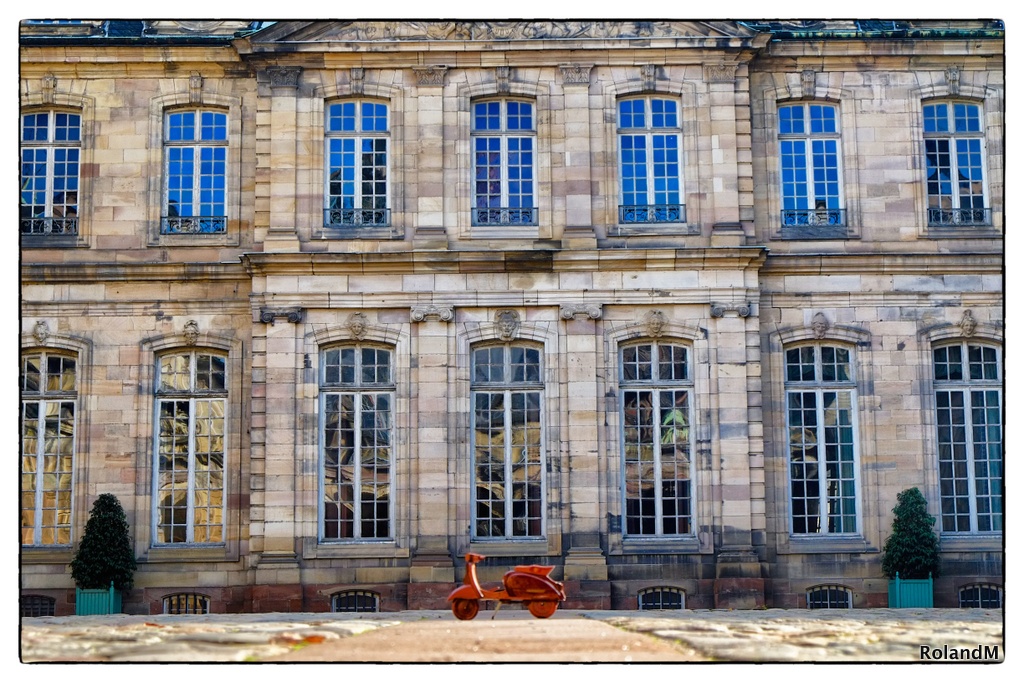 The most popular spot in Strasbourg is its huge cathedral Notre Dame de Strasbourg. But it's a very crowded place, and we didn't want ScooterBob to get stomped on, so we visited briefly, and using a hole in the crowd we got our tourist snap shots done and left. 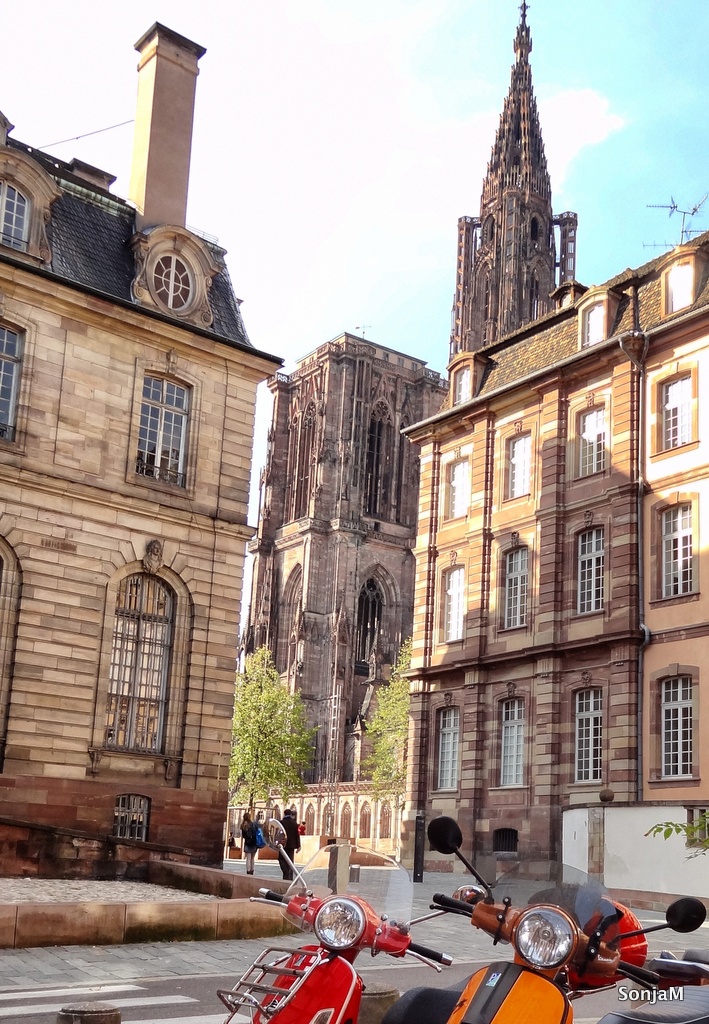 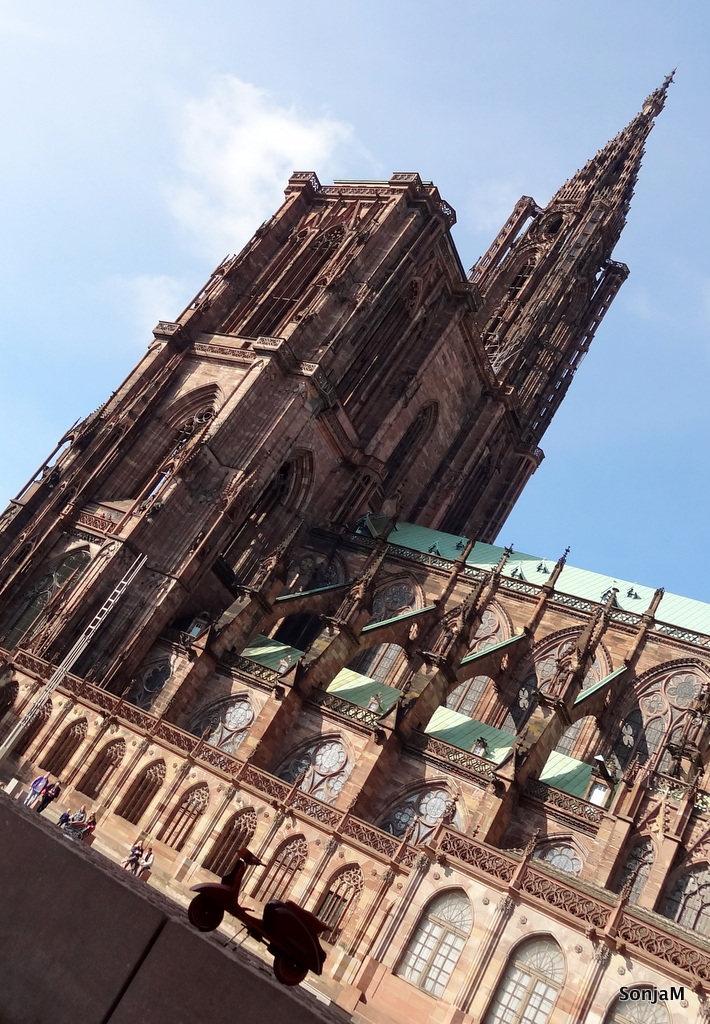 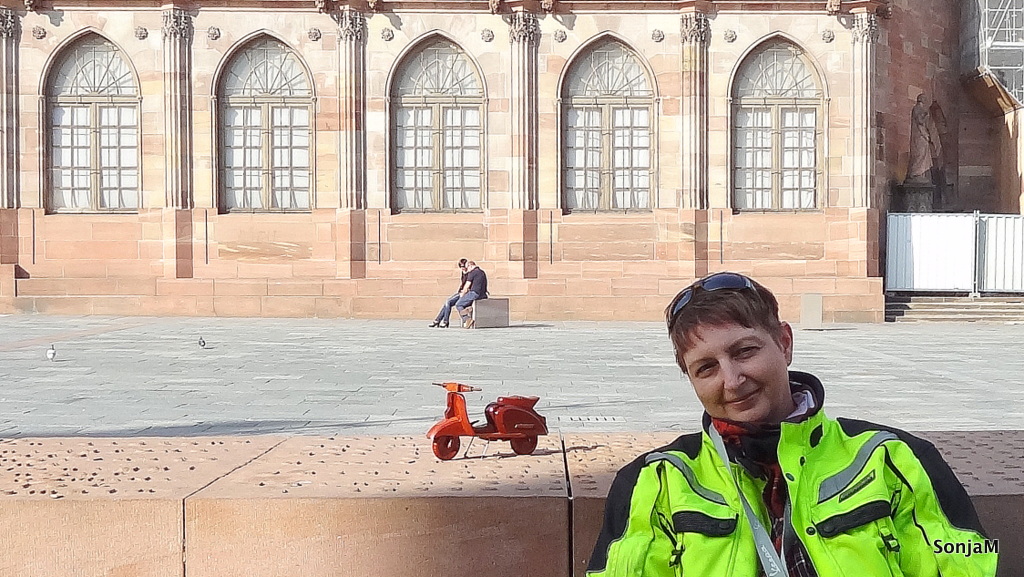 Riding opportunities are getting less now at the end of the season, and riding days are getting shorter, but we are hoping to get in one more ride with ScooterBob. 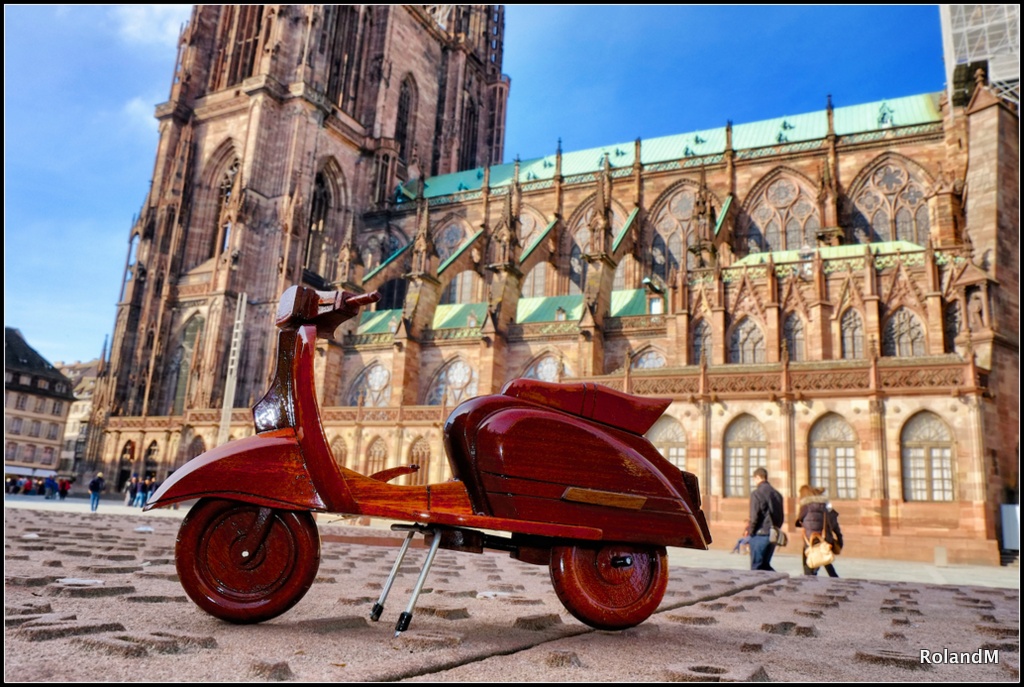 First Ride out with ScooterBob

It didn't take long to convince our 'guest' ScooterBob to come along for a ride on the famous Black Forest High Road. It hopped into my Vespa top case, and off we went on the touristy mountain rim road. 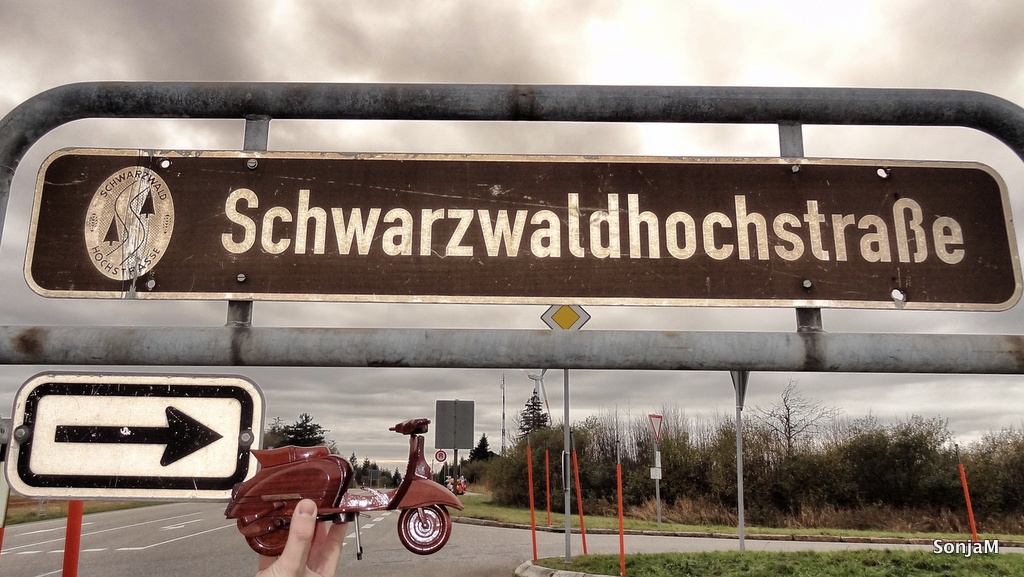 This stretch of federal highway B500 going from Baden-Baden to Freudenstadt is very popular with the two-wheeled crowds. But that distinctive chill in the air which reminded us of season's ending, had the fair weather riders already talked into mothballing their bikes. We were welcomed with next to zero traffic and a wide open road. 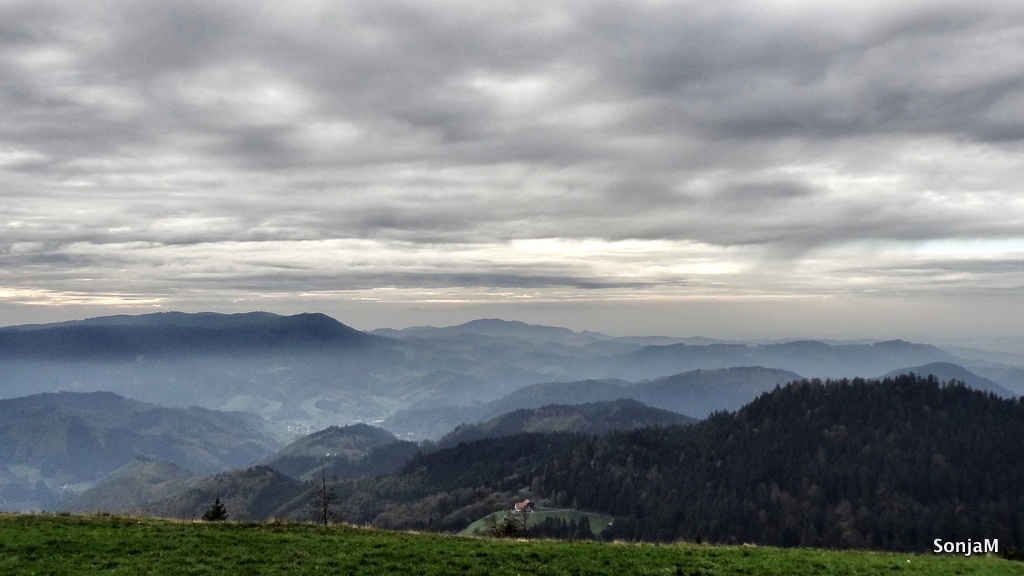 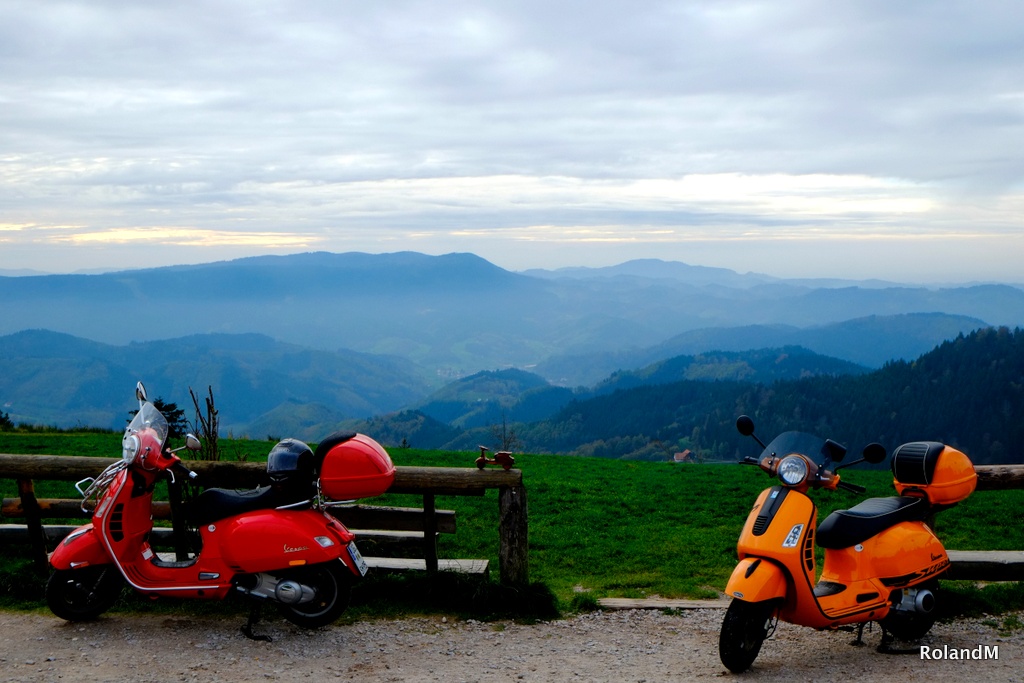 At Zuflucht we stopped to admire the view. Looking west, in the far we spotted the silhouette of the Vosges Mountains in France. This is usually a popular take-off point for hang gliders but the place looked abandoned this afternoon. 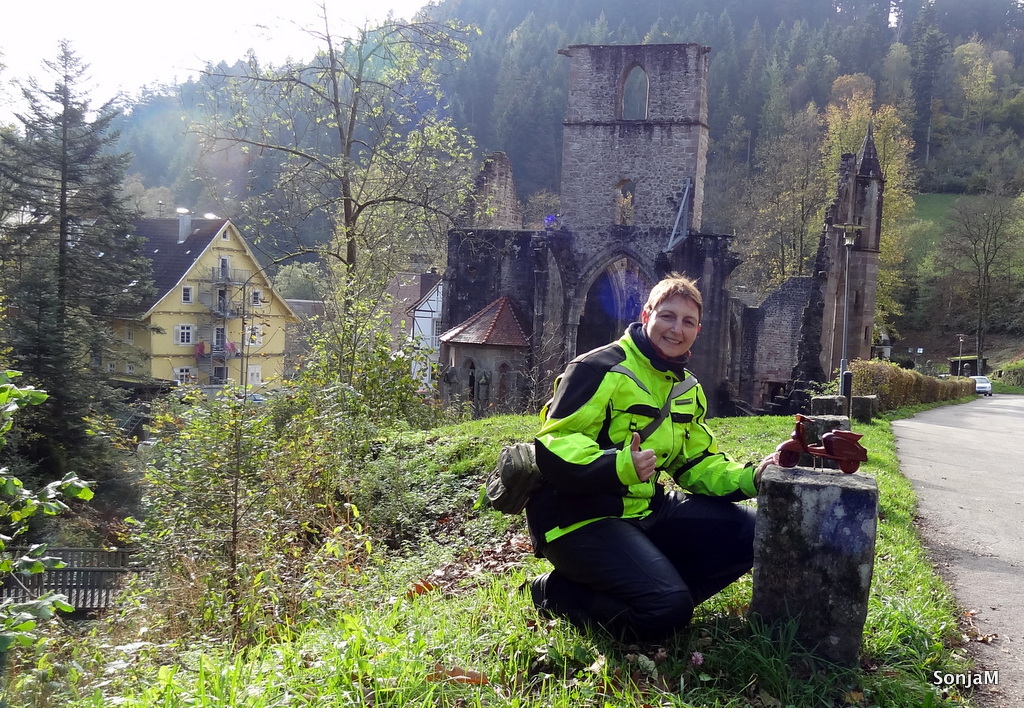 Finally I introduced ScooterBob to my absolute favourite spot in the area: All Saints' Abbey. We had visited many times before, at different seasons, with different guests, and this historic site never failed to impress. 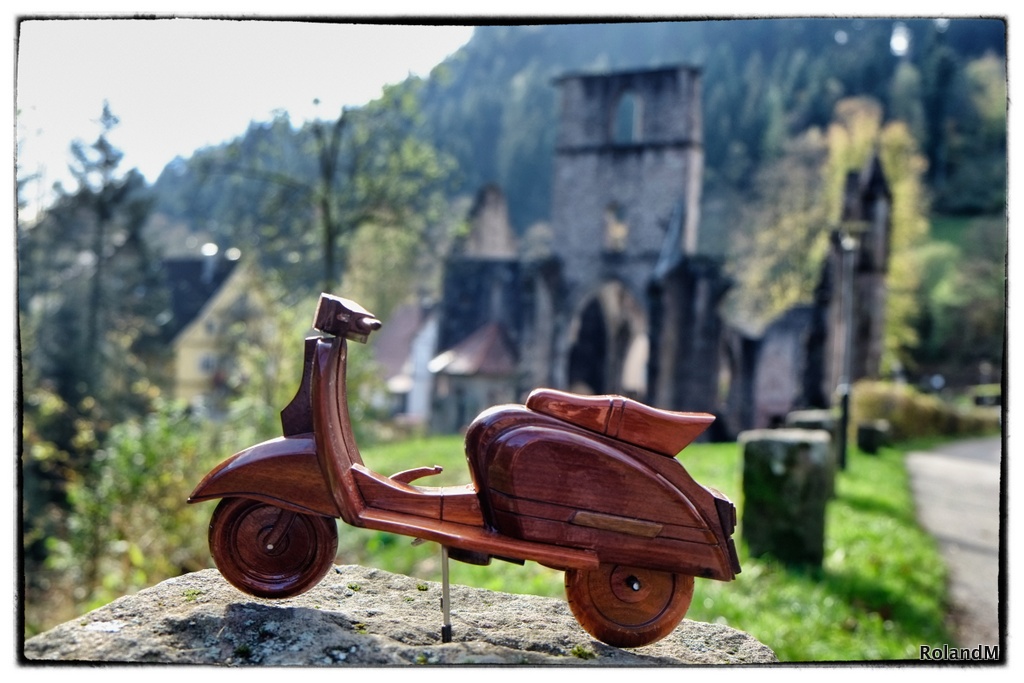 By then the cold started creeping into our bones, and we decided it was time to return home for a nice hot cuppa.
Posted by SonjaM at 11:40 AM 8 comments:

The Eagle (a.k.a. ScooterBob) has landed!

Well protected in his black travel box the wooden trinket left Key West in Florida, fearlessly crossed the Atlantic on its own, and finally landed safe and sound in the heart of the Black Forest, Germany. 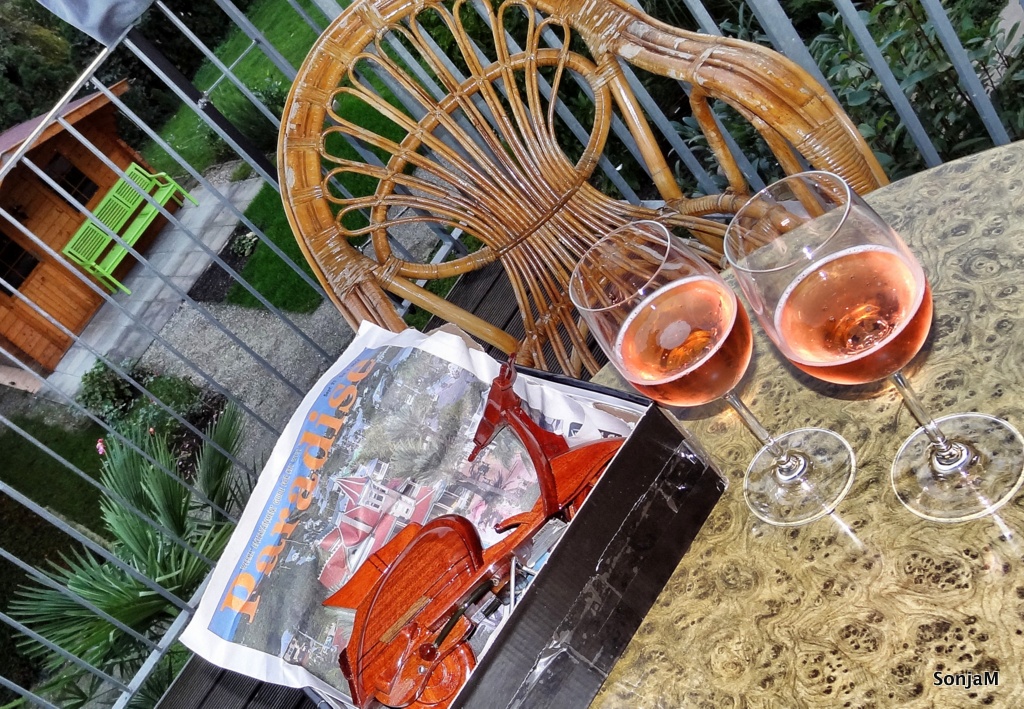 The evening of ScooterBob's arrival was mild, and so we sat on the front porch to enjoy the sunset, with a glas of Hugo Rosé cocktail (Prosecco, elderflower syrup, lime juice, fresh mint and soda water). Here's to my late friend, Bob Leong.

I met Bob, the man and his pink crocs, back in March 2010, after I moved to Vancouver. He became my riding buddy, and a good friend, and I miss him dearly. 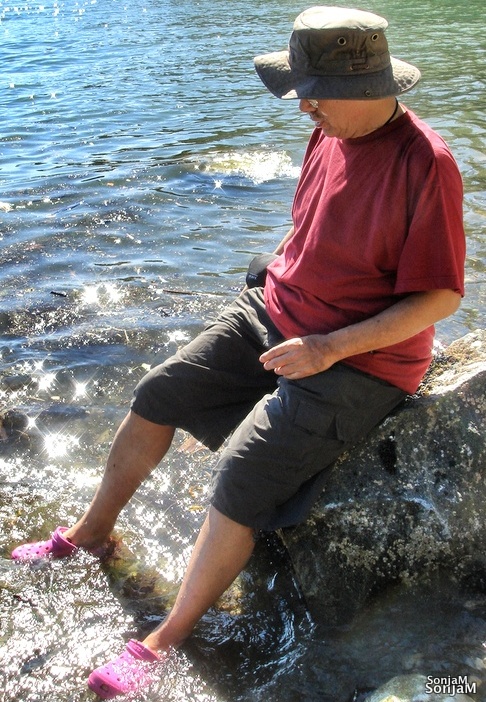 Scooterbob shall spend some time with me, and together we are going to re-discover some of my favourite places in Germany before I'll ship it to its next destination. Please stay tuned for updates. 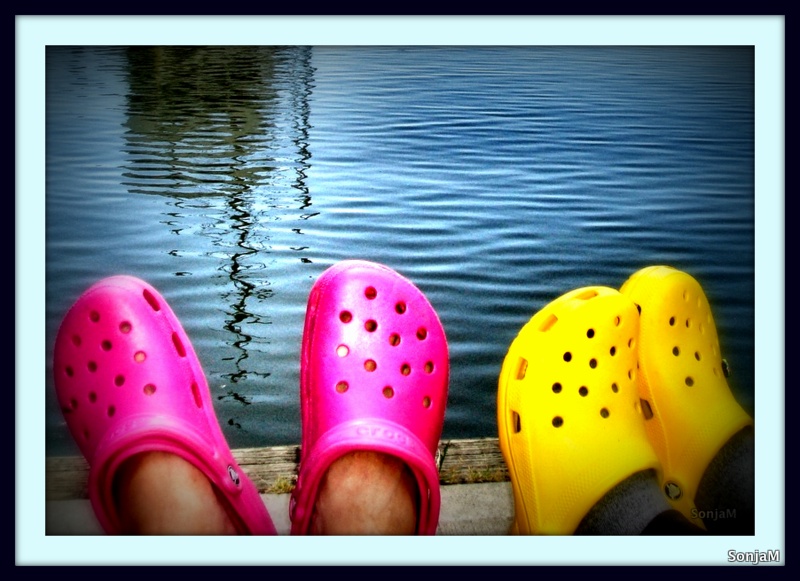 R.I.P. my friend Bob. I know you'll be watching. 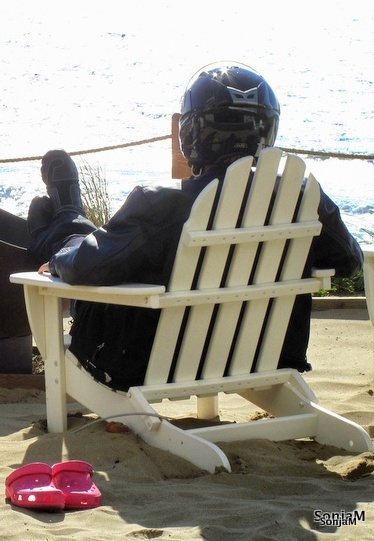 SonjaM, Germany
Posted by SonjaM at 4:54 AM 3 comments:

ScooterBob At The Southernmost Point

When I was in Montreal last summer I met David Masse who  gave me this wooden scooter adornment to play a prank on the late Bob Leong who gave it as a gift to David. David's idea (and it was his not mine...) was to greet Bob in Key West with the wooden scooter already here! So my wife and I loaded it into our luggage and brought it home in anticipation of the Key West road trip 2015. Then Bob died very unexpectedly and the idea imploded. 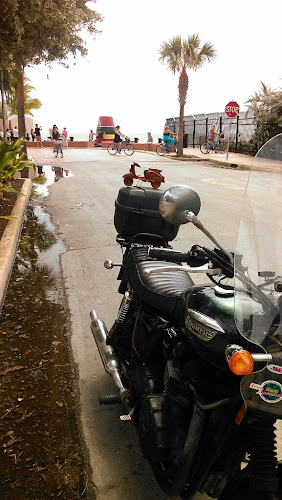 Until David thought of sending the scooter now named Scooterbob around the world to celebrate Bob's wanderlust which he planned to fulfill in the retirement that never came. As I had the scooter at home here is the first stop - where else?- at the Southernmost Point In The Continental United States. Splendid. 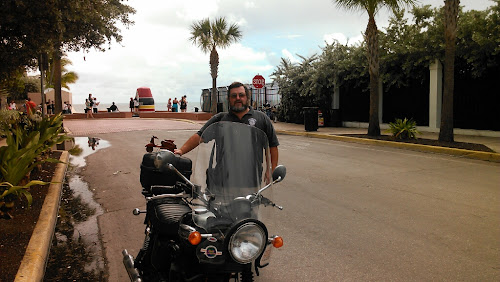 And these are the kind passersby who stopped to do the deed for me; a brief encounter with Mr and Mrs Anonymous  who, when they learned Scooterbob was soon to be sent to Germany got into the spirit of the thing and handled my phone camera like pros. 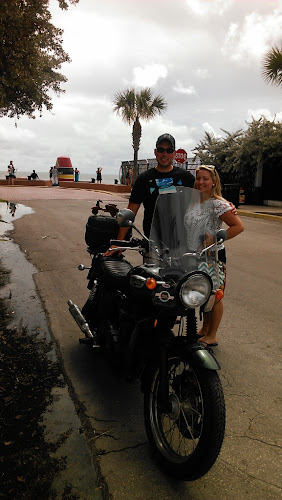 And Friday afternoon I stopped by Pak Mail where a genial Canadian holds court with his two Labradors and together they package and ship everything everywhere. Scooterbob is now en route to Germany where Sonia  promises to show off some of Germany's finest countryside in the  company of Scooterbob. 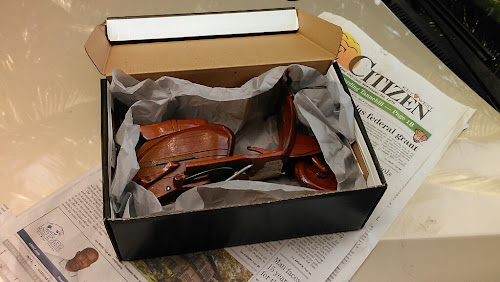 RIP Bob Leong of Vancouver, BC. 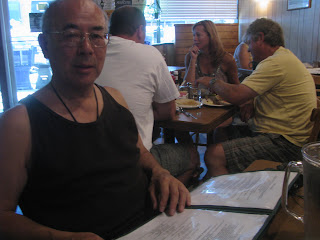 Safe travels in your new guise as Scooterbob, voyager extraordinaire.

This is a slightly long story, but well worth reading, and there's a twist that could involve you, in a good way.

I first met Bob in late May of 2012.  That's only a few short years ago, but it feels like a lifetime.

That first day I set out on the scooter Bob arranged for me and I met Bob at his home in Vancouver.  A whirlwind moto tour ensued that was jam-packed with wonders.  I didn't make it back to my hotel until shortly after midnight.

On the way back from visiting the famed Night Market, we stopped at Bob's place.  He popped quietly into the house and emerged minutes later with a mysterious cardboard box and some bungee cords.  He lashed the box onto the passenger seat of my scooter and then we set off again as he led me back to the Fairmont Pacific Rim where I was staying.  About half-way there we stopped on Granville Island where we sat and chatted about the day and a bunch of other stuff.  Bob took our picture using his signature bike-borne tripod and remote camera trigger trick.  If you look carefully, you'll see the cardboard box in question on the white Kymco scooter.

When I got back to the hotel I opened the box.  There was a bunch of Vespa stuff that Bob thought I'd appreciate, including a Vespa scarf, a Vespa bandana, a Vespa lanyard, and so on.  Also in the box, and greatly contributing to its size and weight was a wooden motor scooter mounted on a marble base, with a plaque that commemorated some event that the then-defunct Vancouver Vespa Club had once organized.

The wooden scooter came home with me to Montreal (minus the marble) were it sat as a decoration and souvenir in my home office for just over two years.

In the meantime, Bob was in the very early planning stages of a moto road trip for 2015 and years beyond.  There was some talk of Key West as a destination.

This summer Conchscooter's dog Cheyenne sensibly suggested to her humans that they travel north to avoid the worst of the South Florida heat and humidity.  Eventually Cheyenne encouraged Michael and Layne to make it to Montreal, a southern outpost of the legendary Great White North.  I think Cheyenne was hoping for snow.  In that regard she was bitterly disappointed.

Conchscooter's visit to Montreal was truly a delight.  Meeting fellow bloggers and riders is always a source of pleasure.

Towards the end of the visit, the topic of a possible road trip to Key West came up.  It was then that it hit me like a flash.  What a great prank to play on Bob!  I gave the wooden scooter to Michael, saying that when Bob eventually came to visit, he would be shocked to find that his wooden scooter had beaten him to Key West.

A few days ago Michael wrote to me offering to mail the wooden scooter back to me.

At that point, another thought dawned on me.  Inspired by a similar feat on ModernVespa, I suggested to Michael that he take the wooden scooter to the landmark in Key West that marks the southernmost point in the continental United States, a place Bob would have been bound to visit, and take a picture with the wooden scooter.

It didn't take Michael and I long to cook up a plan to involve other bloggers in the scheme.  I'm going to remain a little coy on this.  I don't want to spoil surprises.

And there you have it.  If you're a moto blogger, and you know Bob (i.e. Bob posted comments on your blog, or you traded e-mail or phone calls, or you were extraordinarily lucky like me and you actually got to meet Bob, or if you're just learning about Bob now) then the wooden scooter will eventually come to visit you, but only if you want to participate of course.  All you need to do is contact me, or Michael, or Sonja, or Karen, or Dar, and put yourself on the tour list. (Ed.: things have evolved, and Bob's blog is now ScooterBob central.  Click here to see how you can make a ScooterBob request)

There won't be too many rules.  Just enough to make sure that the wooden scooter doesn't get stranded somewhere.

There will be more to come on this topic.  Bookmark this page and that way you'll know what progress the little scooter that could is making. I've taken to calling it ScooterBob.

Keep an eye on the moto blogs to follow ScooterBob as it literally travels the world, on an epic moto road trip most of us could only dream of taking.

This is ScooterBob's first post, and, for the time being, ScooterBob's home-away-from-home-base for the extended road trip, so to speak.

It will be very interesting to see how this evolves over time.

Right now, ScooterBob is on the first leg (well, technically the third leg - Vancouver to Montreal, Montreal to Key West, are legs one and two) of its travels.
Safe travels ScooterBob, and warm regards to all.

Yes, your eyes don't deceive you, Riding the Wet Coast is back, after a fashion.

It's here to carry on a tradition begun by BobSkoot to reach out and connect with moto bloggers far and wide.

New posts will begin appearing here, from time to time, as moto bloggers travel with ScooterBob.

No one can blame you for not having a clue who, or more precisely what, ScooterBob is.

A 'Travels with ScooterBob' page has been added to Riding the Wet Coast.  You can click on the link here, and on the page link above to find out all about it.

All of the future posts here will be guest posts.  This blog will be moderated, as it was in the past, so attention all spammers, expect to have your comment posts obliterated as they were in the past.

Now then, please remain calm, and carry on.  Rejoice! Wet Coast is baaaaaaack!