The Travels of Scooterbob, a tiny wooden Vespa goes around the World


Back in October 2014 the moto-blogger community had learned the sad news about the passing of Bob Leong, the host of this blog. Bob loved to meet and get to know new people, and through his blog Wet Coast Scooting, he made friends all over the place. So between friends and followers the idea was born to send off a little wooden Vespa scooter (once owned by Bob) into the world, to be hosted by fellow bloggers as a tribute to celebrate Bob's life.

And so it came that a little wooden trinket began its travels from Canada's west to the east coast, from Florida it got shipped across the ocean to Europe with stopovers in Germany, England, and France. Scooterbob continued its journey in Australia and New Zealand, before heading back to the UK. On returning to North America its destination was once again Florida, then Virginia, from there taken on a vacation on the west coast, it went to Oregon, Washington, and BC, Canada. After Virginia it landed in New Hampshire, then it made its way up to Ontario, Canada, and after it went on a road trip down to Minnesota. Then it got shipped off to Colorado, and was taken on another road trip. After a stint in New Mexico it marched on, off into the great white North that is Alaska, travelled back to Oregon, and has meanwhile landed on Vancouver Island, not far away from home, where it started over three years ago. Scooterbob's travels, a truly amazing Journey.

Now famous, Scooterbob also made an appearance on Ep. 11 of the TV Show Farkle Garage (thanks to Dar, from  Scootermayhem). 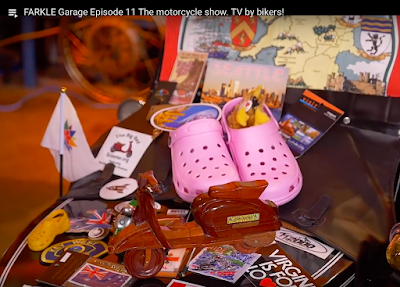