A Snowy Colorado Goodbye for ScooterBob

Along with some pretty cold temperatures, (high today was 3°F (-16.1°C) and about 2-3 inches of snow, it was a good day to get ScooterBob for one last outing with myself and one of my rigs.

Scarlett is the one best equipped to let me deal with cold weather riding so she got to go out in the pre-dawn hour to see what we could see.  The battery however, is not holding a charge very well unless once keeps her on a charger.  It's less than three years old but I guess I am hard on batteries.

Still, she was OK once I jump-started her and we headed off into the lightening gray skies covering the Metro Denver area.

I also need to, it seems, replace the pusher tire as I was not getting good traction with the rubber that remains on it.  I had to engage 2WD to get out of the cul-de-sac and actually left it engaged through the entire ride! 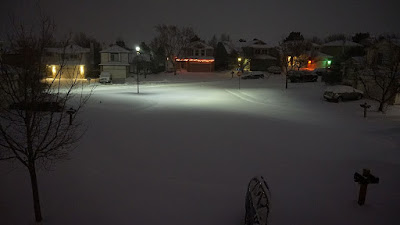 A view of the cul-de-sac, the untouched snow a blank canvas... 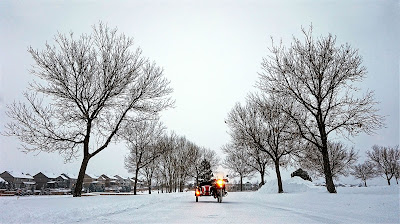 Trees at the local high school where Martha used to work.... 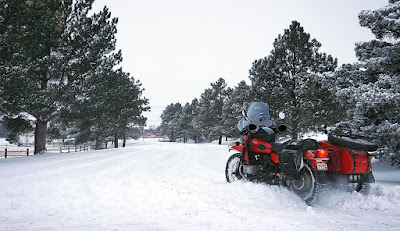 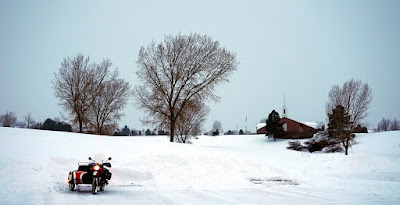 A view of the Mormon Stakehouse across the street from Eaglecrest H.S. 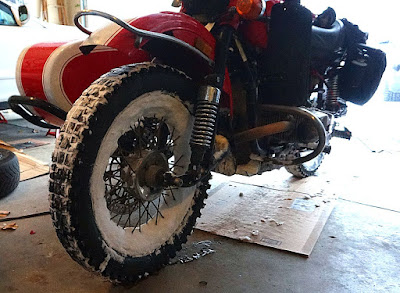 All wheels nicely packed with the fresh snow.... 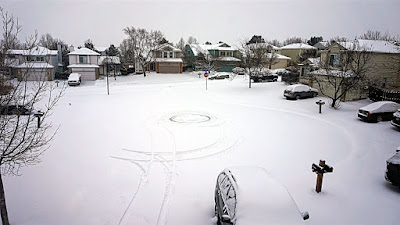 I'd mentioned the cul-de-sac was a blank canvas?
Hopefully you can the the markings left by Scarlett as she headed out
and came back in, doing a few donuts in the snow of course. 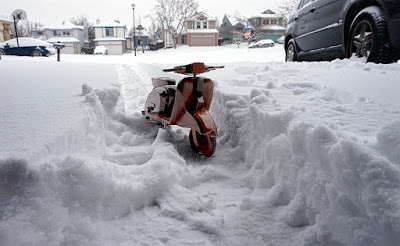 ScooterBob let me know, as I was putting Scarlett back on the charger
that he wanted to go out once last time while here in Colorado.

Scarlett and I, this time with ScooterBob in the trunk, left shortly before Noon to take my oldest son Patrick to work at the local Sprouts grocery store.

As we were out, and the sun was out, it was time to visit the somewhat nearby ranching neighborhood to see what we could see.

There wasn't as much snow in this area as in my neighborhood, but we made do: 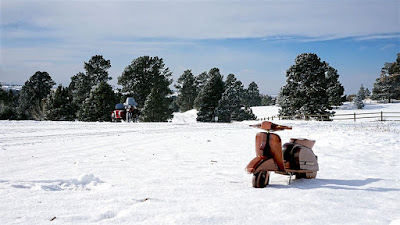 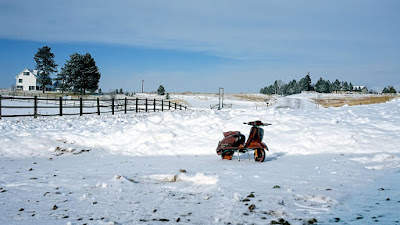 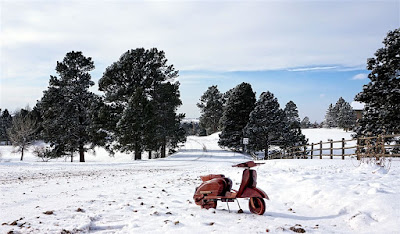 ScooterBob declared his satisfaction with the snow conditions, and then said it was now OK to leave the sub-freezing 3°F (-16°C) temperatures and go back home.

Roads remained snow-packed but the sun was already working on clearing some spots.  Cagers of course were in their usual rush to get somewhere; which made the last couple of miles of riding interesting but with no incidents.

Shortly before sunset, we all headed out one more time, this time to catch the sunset and to pick up Patrick from his job at 5:00PM.

We decided to head down to the tower located in the Tuscany neighborhood down the road from our own neighborhood. 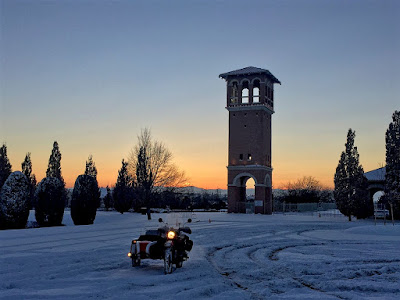 The tower is purely decorative, my guess it's supposed to evoke
thoughts of Tuscany, Italy's architecture style. 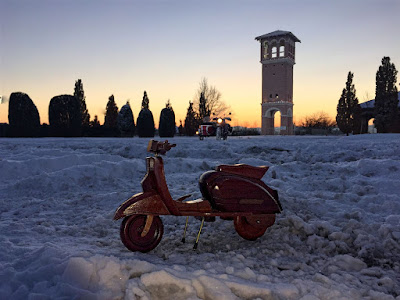 It was 0°F (-17.7°C) when Patrick finally clocked out and we four headed home in the darkness.  Scarlett convinced me do do a couple of donuts in the cul-de-sac, both surprising Patrick and hopefully amusing my next door neighbor who was out there shoveling his driveway in the dark.

ScooterBob will be packed up tomorrow, along with all his belongings, and shipped all the way to Fairbanks, Alaska.  The idea is for him to experience some "really cold" weather while being hosted by RichardM.  Richard being a fellow Ural/Beemer rider who has real experience in riding in extreme cold weather, ScooterBob will have so much fun.....  ;)

Posted by redlegsrides at 4:40 PM 5 comments:

We experienced some true winter weather here in the Metro Denver area this week, finally!

Lots of snow in the mountains of course, to the delight of skiers and the ski resorts but all we got around my home neighborhoods was about an inch or so.

Still, it was so cold (low teens) that it was the fluffy kind of snow, so not hard to clear off one's driveway but it stuck around long enough for me to get some pictures.

Here's some from Wednesday morning, after the snow had started falling the evening before: 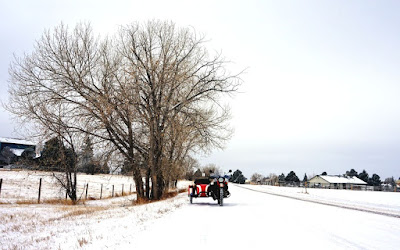 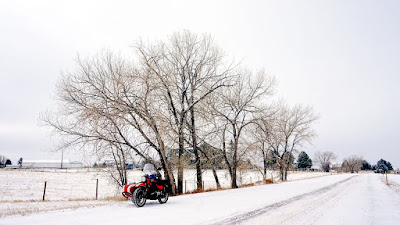 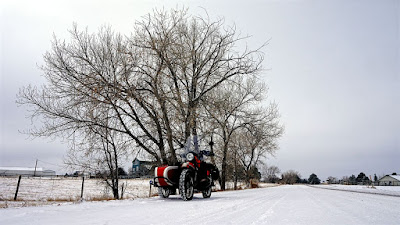 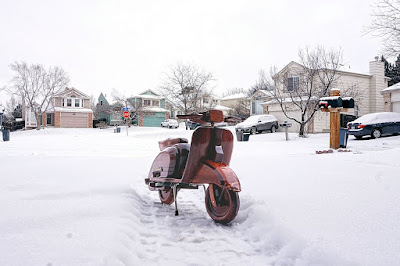 Here's what it looked like on Thursday morning, after the storm clouds had gone east and the sun came out: 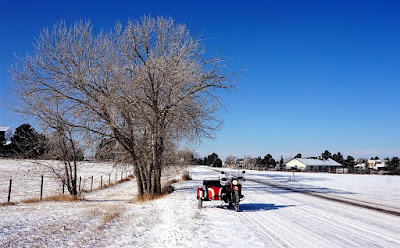 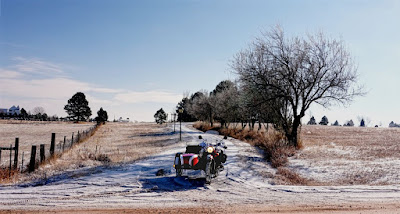 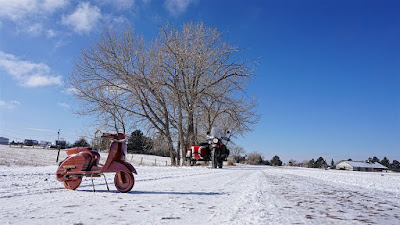 To finish off the week, we had a pretty good sunset this Friday evening.  The roads are dry and the snow has pretty much disappeared from the metro area roads.  More snowy weather coming I hear, we'll see what shows up. 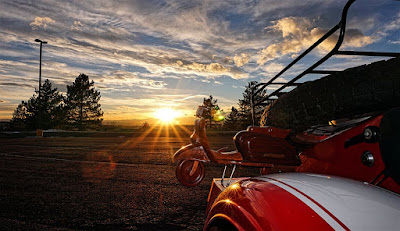 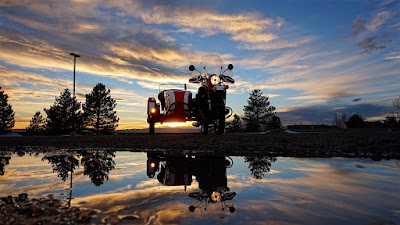 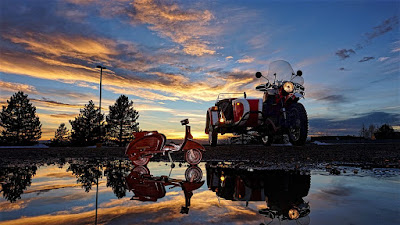 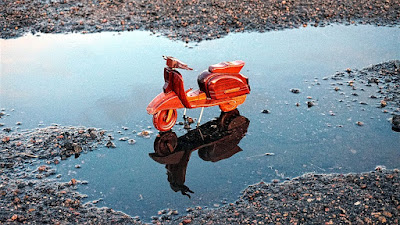 The above shot to give you an idea of how small the puddle was that
I used to get the reflecton shots.

Posted by redlegsrides at 5:56 PM 3 comments: