The accidential tourist or "we zig instead of zag."

I work two jobs, one is my regular "9 - 5" job from Monday to Friday and is the majority of my income.  The other one is a part time job that I've maintained for myself since 2008 or so.  I own my own small distribution company which delivers magazines and other products to various locations.

What that means is that I very rarely have a free weekend.  This was one of those rare free weekends and since it fell on the Easter holiday, a lot of the places and things that I wanted to show Scooter Bob would be closed.  The weatherman also kept trying to convince me of heavy rain showers but they seemed to be off in the distance, I decided to take my chances and head towards the beaches.

I headed towards Tampa and Clearwater but then thought of something that might be interesting, so I veered to the left instead of the right.  Only to find this closed due to the holiday.   I was on a road that would lead to one of the beaches nearby...but traffic was particularly heavy.  It's freaking hot sitting in traffic.

"Hey Rob!  What is Palm Harbor?"  Scooter Bob called from his box.

"Just a small town I've never been to.  It might be fun to check out." I yell back, as we zig, or is it zag, towards this new destination. 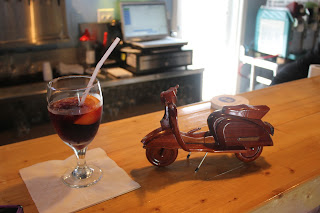 "Rob, lets get a drink."  As I pull over into the Two Lions Winery and Palm Harbor Brewery.  The place is empty but it was just opening up and I try a few small samples of their beer.   I have to be honest, while decent I've had much better beers.  Their wine however is wonderful and I can't help but tuck a bottle of Sangria next to Scooter Bob as we head out the door about an hour later.

The bartender, Christie, loved the story of Scooter Bob and told me that one of the owners had just died, and how creating a traveling mascot for him may be in order.  So Kevin Zylstrt know that you were loved and that this little motorcycle brought a little joy to your staff.

I knew that Palm Harbor was not far from Dunedin, another small town that I understood to be famous for it's art, it's various breweries and Honeymoon Island.   Plus it was a place that I have never been to, so I pointed Kimmie's wheels in that direction but first I decided I needed to grab a bite to eat.  While I had not had much to drink, I am not going to risk a ticket or worse.

A couple of fish taco's later and we were on the way south again.  I'm looking for two craft beer places, I don't know how Bob felt about beer but I enjoy a good libation and heard nothing but good things about the Dunedin Brewery and it's nearby friendly competitor the 7th Sun Brewery.

I was in no hurry to get there however and stopped in the small downtown area to have a look around.  There were more than a few art galleries and other interesting places to pop my head into, but sadly it being Easter Sunday they were all closed.

Over all it was not a bad day, I stopped at Dunedin Brewery and ended up passing on 7th Sun.  Another time, another trip.  For now I was happy and pointed my wheels back towards home....which was an adventure in itself but that is another story for another time.   I'm safe, happy and wishing everyone a wonderful and joyful Easter Holiday (even if you don't celebrate it).


Posted by The City Mouse in the Country at 4:20 PM No comments: 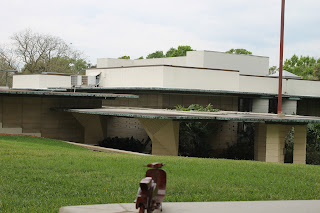 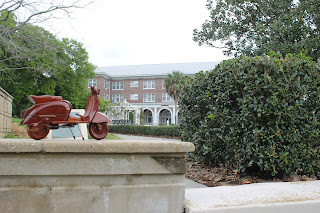 3/13/2016 - It's been a busy week.   My bike suffered a breakdown and because of other issues I've not been been as vigilant with Scooter Bob as I should have been.  In fact, today would have been a perfect day to run him down to visit the Manatee's at the Big Bend Power plant or get him kissed by a mermaid.  Next weekend I will be running around all day Sunday afternoon and helping Sue with the annual "Side Door Cafe" project.

Instead I spent some time working on our kitchen remodel and laying around the house in my pajamas catching up on my reading and tv watching.  You need a day off to do nothing now and again.

What we were able to do was to get him involved in a parade yesterday.  The town where I live, Zephyrhills, was founded in 1910 as Abbot Station and was a planned community to serve Civil War Veterans.  Today it's more known for Zephyrhills water and being a town full of snowbirds.

Every March though they have a Founders day parade, which was held on March 12, 2016 this year.  This is the first time that I was asked...volunteered...recruited....drafted into taking part in it.

Linda K, who was organizing the group originally wanted me to do something again to Easy Rider, since she thought that "Scooter Bob" was a living breathing person that was visiting me.  She did however love the idea of a little wooden scooter traveling the world and promised that Scooter Bob would get a shout at as our little golf cart passed the reviewing stand.

Posted by The City Mouse in the Country at 5:49 PM 5 comments: