So ScooterBob arrived in his Travelling Box, and I have had to inflict a terrible indignity upon him.

The Lomax, which is nearly a motorcycle, has once again had a spasm sufficiently serious to take it off the road. Bob was very encouraging last year when I rebuilt the heads, and he kindly refrained from pointing out on Thursday when I took him to meet the Lomax that the sensible person would have renewed the exhaust manifold studs when the heads were at Ivor Searle's Engines of Excellence having the valve seats reground.

But we don't have long together, and I couldn't leave ScooterBob at home - so he came with me and Shakey to a caravan rally. 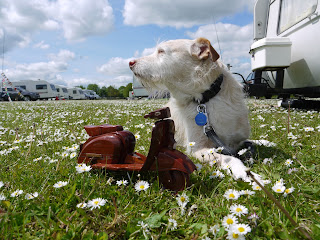 I hope he felt at home. It was the 60th Birthday of the Northamptonshire District Association of the Camping and Caravanning Club. There were people in crocs, there was cake, there was a comedy act on in the evening, and there were lots of friends together having a good time. More entertainingly, on Saturday morning there was an irate bride who had wanted to use the beautiful field for her wedding photos and was not impressed to see it covered in caravans and motorhomes!

I explained about ScooterBob and why he was travelling the world, and they understood. I forgot to buy a pennant for his box though. I blame the cider.

To make it up to him we went to see the  memorial to Triumph's Meriden works. Next week we will go and see some more motorcycling history in the company of friends. 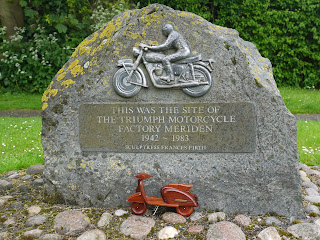 The doorbell rang and the courier stood there, holding a shoe-box size package with my name on it. I knew what was inside.

I carefully opened the box and took out the contents. It was a wooden model of a scooter. Most people would not give it a second glance, but it meant a lot to me. This had been half-way around the world and held by many people who all had one thing in common. We all liked and respected the man this model had come to represent. That man was Bob, who also went by the name of BobScoot. I am writing this on the one thing that tied all of us together, Bobs blog.

Like many, I first met Bob electronically, when he either found my own blog, or I found his. Soon, we starting reading each other’s writings and probably like many, I was drawn to not just what he wrote, but the way he wrote it. Bob poured his heart and soul into his blog. Interesting, funny, moving and always full of pictures both good and ordinary, his blog postings told us about the man, what he liked, how he felt, his travels, and of course the odd things peculiar to Bob, like his pink Crocs, plus his wish to nearly always include a picture of his feet.

Many people followed Bobs blog. He seemed to be at the centre of like-minded people who enjoyed writing about their motorcycle travels. He was the one person we all read about, as his words and pictures were eagerly read many around the world.

Bob often offered his help. I remember I was about to go on a long motorcycle trip and wanting to film and then edit some videos, then this near stranger called Bob who lived thousands of miles away in Canada, offered his advice which was very gratefully accepted. I think that was typical of the man – he helped anybody that he could. He certainly helped me on a few occasions.

Bob died nearly a year ago. It was sudden and a shock. No doubt it hit his family very hard as I think there was no clue he was ill. I remember hearing the news and sitting there numb, as a good friend had been taken from us. Bobs last post on his blog was very typical – on holiday with his wife Yvonne, he posted pictures and words about the two of them driving his Corvette around Kentucky. I really miss reading his posts.

I met Bob just once. When I rode around the USA I didn’t go near to Vancouver where Bob lived, but I regretted that and afterwards made a special trip, renting a bike in Seattle, and rode to his house. Bob and Yvonne were as kind as I had expected, showing me around, taking me to dinner, letting me stay at their house and genuinely wanting to spend some time with another road traveller. Bob did that a lot. I enjoyed reading about his meetings with other moto-bloggers all over America. Not only did Bob read others’ blogs, but he wanted to meet the people as well. What a thoroughly nice guy he was. I remember he laughed when I arrived in Vancouver wearing a copy of his trademark footwear – pink crocs. Bob and I walked around Vancouver both wearing our amusing pink crocs. I am not sure what people thought, but I can imagine!

So, in honour of the man by those that knew him, this model, appropriately called ScooterBob, has been travelling around the world and has been taken to various places to be photographed with and by the people that knew Bob. It is a terrific idea and I really enjoyed seeing the mementos that people have also placed in ScooterBob’s box.

It seemed obvious to me what picture I should include first on this posting – here I am with one of my bikes, wearing my pink crocs, of course…..
While I live near London in England, I took ScooterBob to St Tropez in France on a motorcycle trip as that seemed the right thing to do. We rode from London through France, Belgium, Luxembourg, Germany, Switzerland and back into France to reach the Mediterranean Sea. On the way, Sonja (who knew Bob as well as most as she also lived in Vancouver for a while) joined our group as we made our way through Germany. I had intended to post many pictures of ScooterBob in these countries, but as the title of the post says, sometimes, things don’t work out like you planned. Rather embarrassingly, I managed to accidently delete most of my photographs of the trip. Initially, I was horrified, but in hindsight, that is not a bad thing, as it has allowed me to concentrate on writing something about Bob and remember him, rather than show pictures of where ScooterBob was taken.

So, here are just a few pictures, that don’t do justice to the Bob who took such great pictures himself.

Bless you Bob, you are missed by many.


ScooterBob is now travelling once more, on his way to Shelia.
Posted by Gary France at 3:11 AM 17 comments:

It had been a pleasure and privilige to have been able to host ScooterBob and knowing Gary France was keen to take him on tour to France within days I decided to take SB for a quick wizz around my hometown Knutsford prior to dispatching him to London.

After the park we take a stroll back through the town to buy ScooterBob a farewell capucinno.

Well that's it from me - thanks for reading and goodbye (or is it au revoir?) ScooterBob.
Posted by Nikos at 3:45 PM 22 comments: