ScooterBob is a wooden motor scooter that is traveling the world in the company of moto bloggers.
You'll find links to the posts documenting ScooterBob's travels and ScooterBob's back story below.

Here are the guidelines if you want to travel with ScooterBob.  Please note that we're making this stuff up as we go along.  The 'we' in these guidelines is three bloggers and self-appointed moderators who, with the blessing of Bob's family, are now moderating Bob's blog.  Everyone who indicates an interest will eventually receive a more detailed e-mail either requesting follow up information (if we're missing some addresses or other information) or providing a little more information (like where you are on the itinerary, and where the next stop might be).  ScooterBob will be traveling between assignments care of the postal service.  We'll try our best to keep those costs down, but there will be a number of inter-continental hops.  Right now we're working on a list of guides, and some internal organization ideas for ourselves so that ScooterBob's travel agency can keep things simple and efficient.

The Tentative Itinerary
(a note of caution, the map is only a very rough guide, as you can tell from the list.  We've given up on numbering the legs, it's beginning to be like a Picasso line drawing. The ability to update this map has escaped the artist, or rather the software that did it is no longer available. ScooterBob is currently in the US midwest, well along the yellow portion of the itinirary) 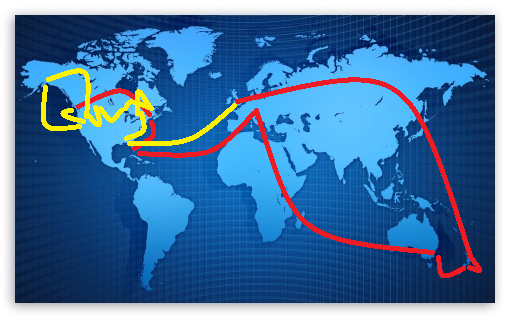 It once belonged to Bob Leong.  Bob was a very well-known and very well-liked moto blogger.  ScooterBob, the wooden motor scooter, earned that name the moment it was assigned a globe-trotting mission to meet moto bloggers and see the world.

Bob was, like the rest of us, an imperfect human being, with some wonderful qualities.  Anyone who met him knew him as gentle, humble, kind, thoughtful, generous, and adventurous. Those are the qualities that endeared him to the moto blogging community.

Bob parted with the wooden motor scooter when he gave it to an east coast blogger.  That's how it came to Montreal, where it stayed for a time.  On a whim, and as a prank, the scooter traveled with another moto blogger to Key West.  The goal was to surprise Bob when he showed up there on another leg of his mission, only to find that the lowly wooden motor scooter had beaten him to the destination.  That prank was destined never to bear fruit.

Can it be that Bob's indomitable spirit rubbed off on the wooden scooter?  How else can you explain its journey to Key West?

One thing is certain, ScooterBob has now joined the growing category of traveling things. Most traveling things are in the category of geocaching travel bugs.  The idea behind ScooterBob came from a similar experiment on ModernVespa involving a spaceman Snoopy doll.  If you take the time to read all of ScooterBob's adventures, you will see that ScooterBob and the spaceman Snoopy doll traveled together on the last leg of Snoopy's worldwide adventure when it returned to the Kennedy Space Center where it began its adventure.

On a higher tech plane there is the Hitchbot experiment.  Hitchbot made it from Halifax Nova Scotia to Vancouver British Columbia.  ScooterBob may not be high tech, but it's powered by intrepid moto bloggers, a force to be reckoned with.  ScooterBob had already beaten Hitchbot's puny feat when it was only barely on its way.