This post is just to ensure that my "Insert Image" icon works so this is my last test before I go back to normal programming.  I am so happy that my problem was Internet Explorer and I have now switched to Google+ Chrome and I like it. 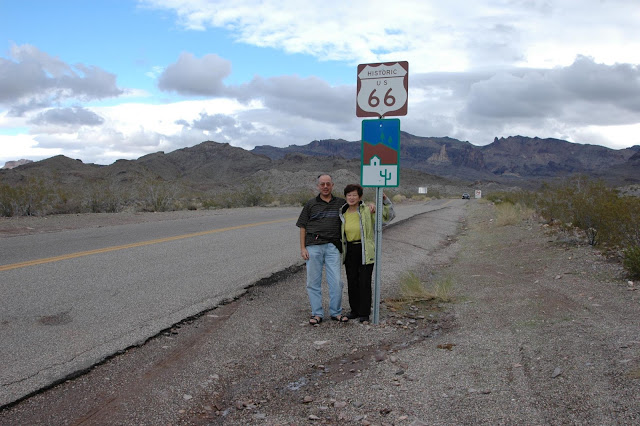 I have a stack of archived DVD's.  This was the way I used to save my photos.  I carefully removed all the photos from my hard drives and I thought that it would be better to store on a physical disk, but my new way is just to buy more Hard Drives as storage is much cheaper than it was 8 years ago.  And also it takes a lot of time to move gigabits of data 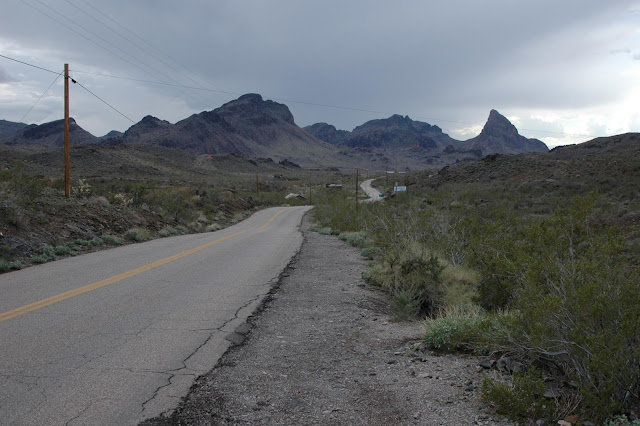 This trip was very late in the year as we both couldn't get our time off to match.  At least we weren't there during the heat of summer.  I can imagine sweltering in the 100°F heat.   We flew into Las Vegas and the next morning we drove our rent-a-car directly to Route 66, Flagstaff then North to the Grand Canyon 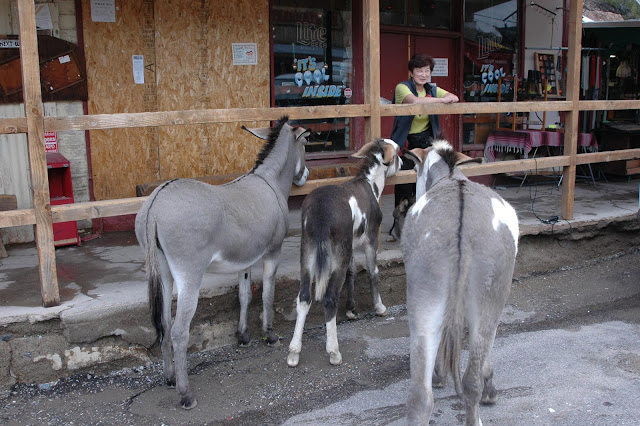 Oatman is known for their "wild" donkeys, and they roam freely around the streets begging for food.   We wanted to feed them so we thought we were smart to buy our Carrots in Laughlin where they were cheaper. We came prepared and as Mrs Skoot fed them they followed us everywhere, even inside some of the stores as we were trying to get away from them 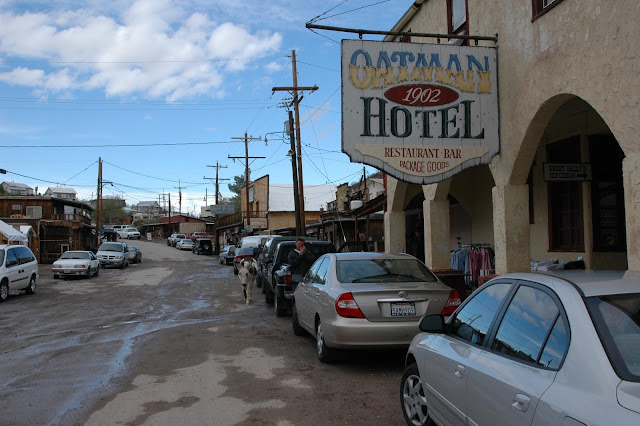 Here is a view of the unpaved main street.   Not many tourists around this time of year 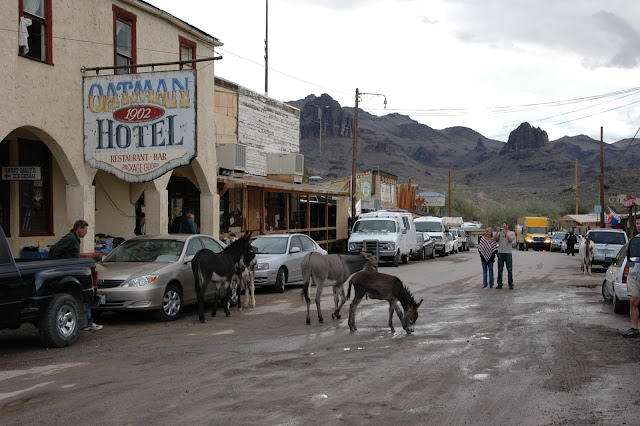 Only the donkey traffic jam, probably more donkeys than people 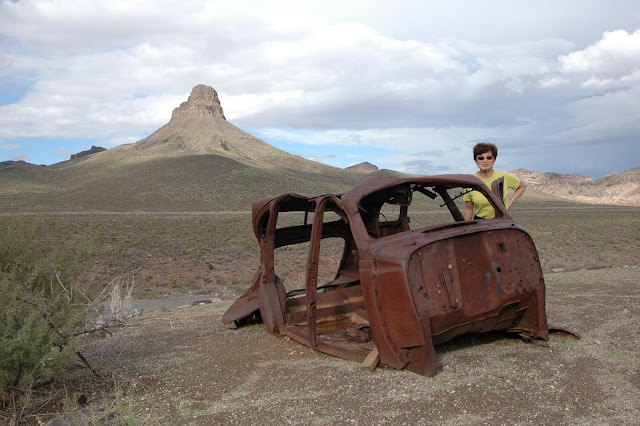 As you see, I stop everywhere for photos.  Not that it matters but all of these images were taken with a Nikon D70 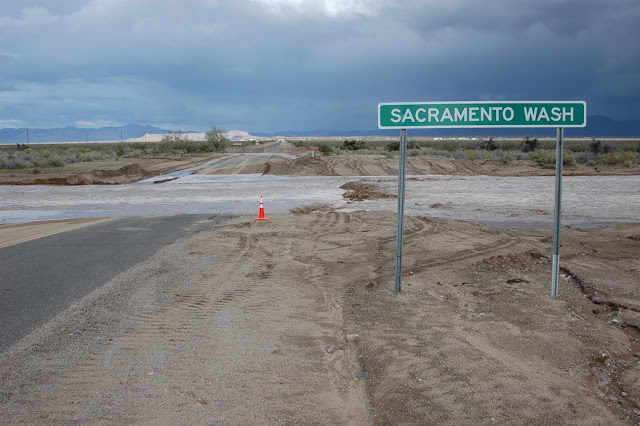 We have never encountered a flash flood before.    Just moments before we passed some cars going the other direction.  I was tempted to drive right through in our Rental car but luckily we didn't as the water got much worse.   We had to turn around and drive an extra 100 miles around to get to where we were going, to Williams for the night.  In retrospect we should have just waited half an hour then perhaps we could cross 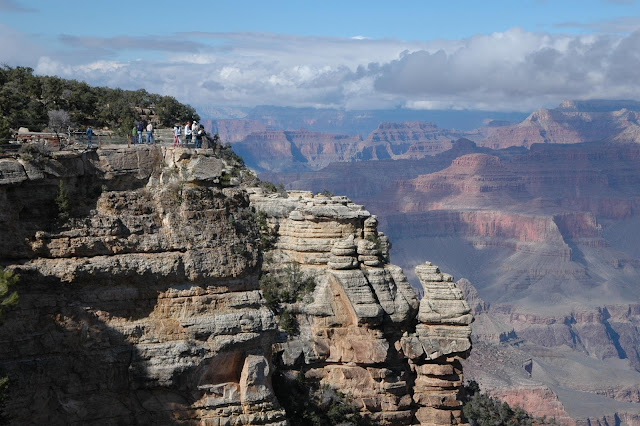 It was our first time coming here and it was awesome.   Even with a wide angle lens you couldn't capture the grandeur of what your eyes are seeing.   There was so much to take in.   The viewfinder of your camera could only capture a small rectangle 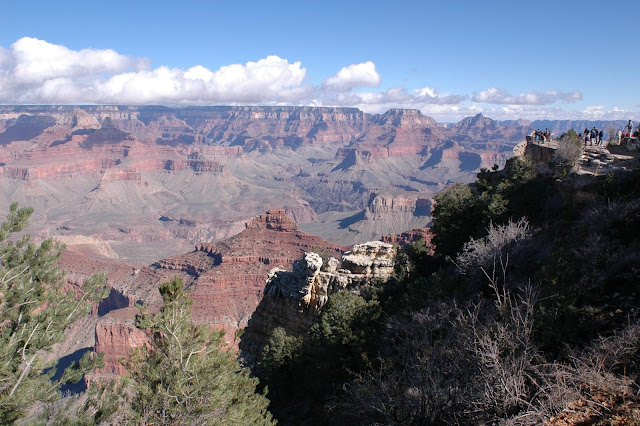 We just had to breathe it all in, stare at the views and walk around to a few viewpoints.  Of course I snapped a few photos 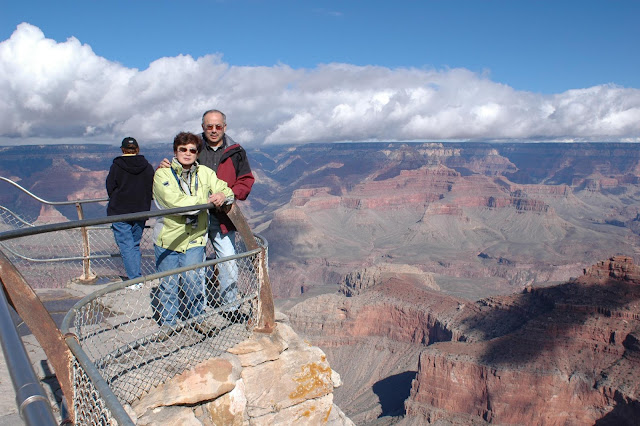 I alway try to purchase cameras with remote control shutter releases, and I usually bring a tripod.   On every trip I try to come back with at least one portrait of the two of us.    I have given up on asking others to snap photos of us as they never frame the scene the way I ask them to.   I like to do it myself.   I also don't like to use those 10 second self timers.  I had bad results using them because you never know when they "go off" and also you can't survey for people walking into your scene and are usually in the background which you don't notice until you get home 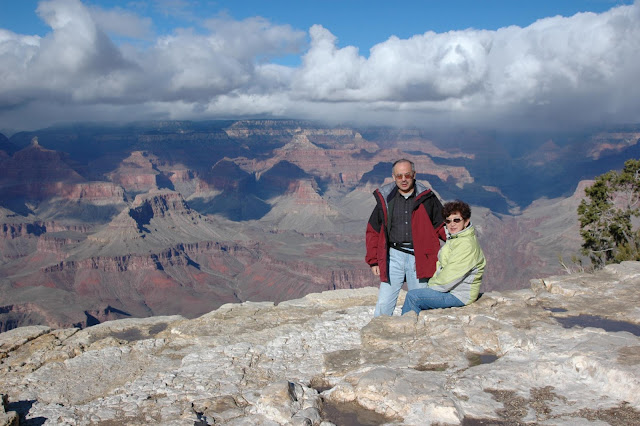 I actually had this one enlarged.  It looks like we are standing on the edge of the Canyon without any guard rails in sight 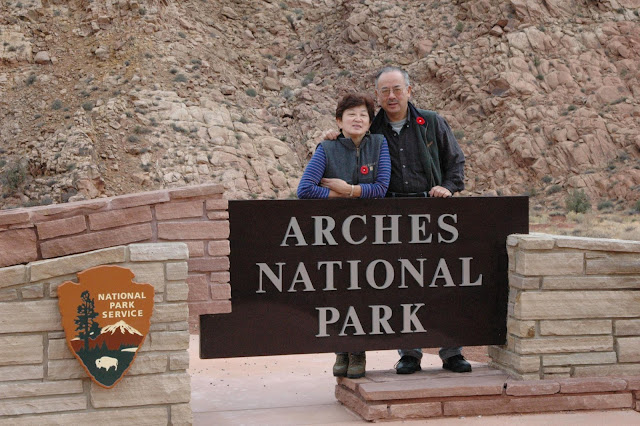 A day or two later we ended up in Moab, UT, where we stayed for a couple of days and explored Arches NP and CanyonLands NP

Thanks for looking at our vacation photos.  They were just a bunch I dragged over from my archived DVD to test out Google Blogger and the "insert image" icon.   I am happy to report that it all worked the way it should

As the links to my previous photos will soon be broken,  it is my plan to dig out a DVD every so often and post some photos of years gone by.  For those interested to know; I bypassed the Picasa3 interface, which I don't like and I upload directly to my Picasa Web Album.  I select which photos I wish to display and put them into my temp directory.  I run a bulk resize program which reduces the size of all photos in that directory in one swoop and then I upload all them at once, as a group.  It is fast and easy.   When I want to post an image I "upload from Picasa", highlight the photo, or double click really fast and then resize and position from the resize menu.   The only glitch is that your cursor always goes to the top.