ScooterBob on the Coromandel Peninsula, NZ

International traveller ScooterBob arrived in Coromandel Town from Andrew further down the North Island of NZ.  We were having breakfast on the deck when SB arrived so it was an opportune time to remove him from his travelling home, let him have some sunlight and welcome him to our neck of the woods.  As Bob loved people and valued friendships, I thought it would only be right and proper to introduce ScooterBob to some of our great friends during his stay - more on that later. 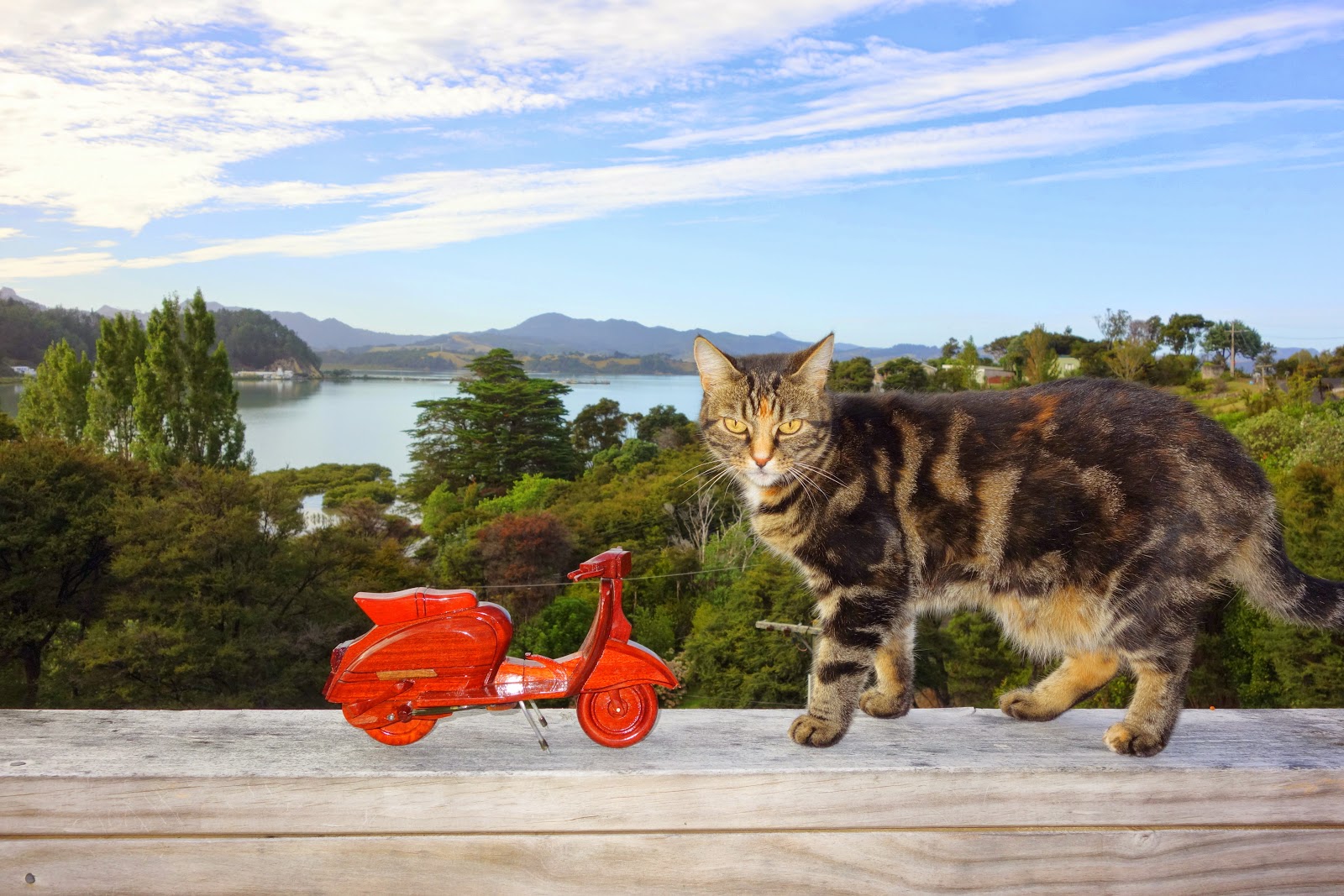 Annie welcoming ScooterBob to our home

We didn't want to wear SB out on his first day so his first outing was close to sunset when I took him down to the town wharf to let him look at the fishing boats and meet a couple of the local commercial fishermen who were enjoying a cold beer after a day out at sea. 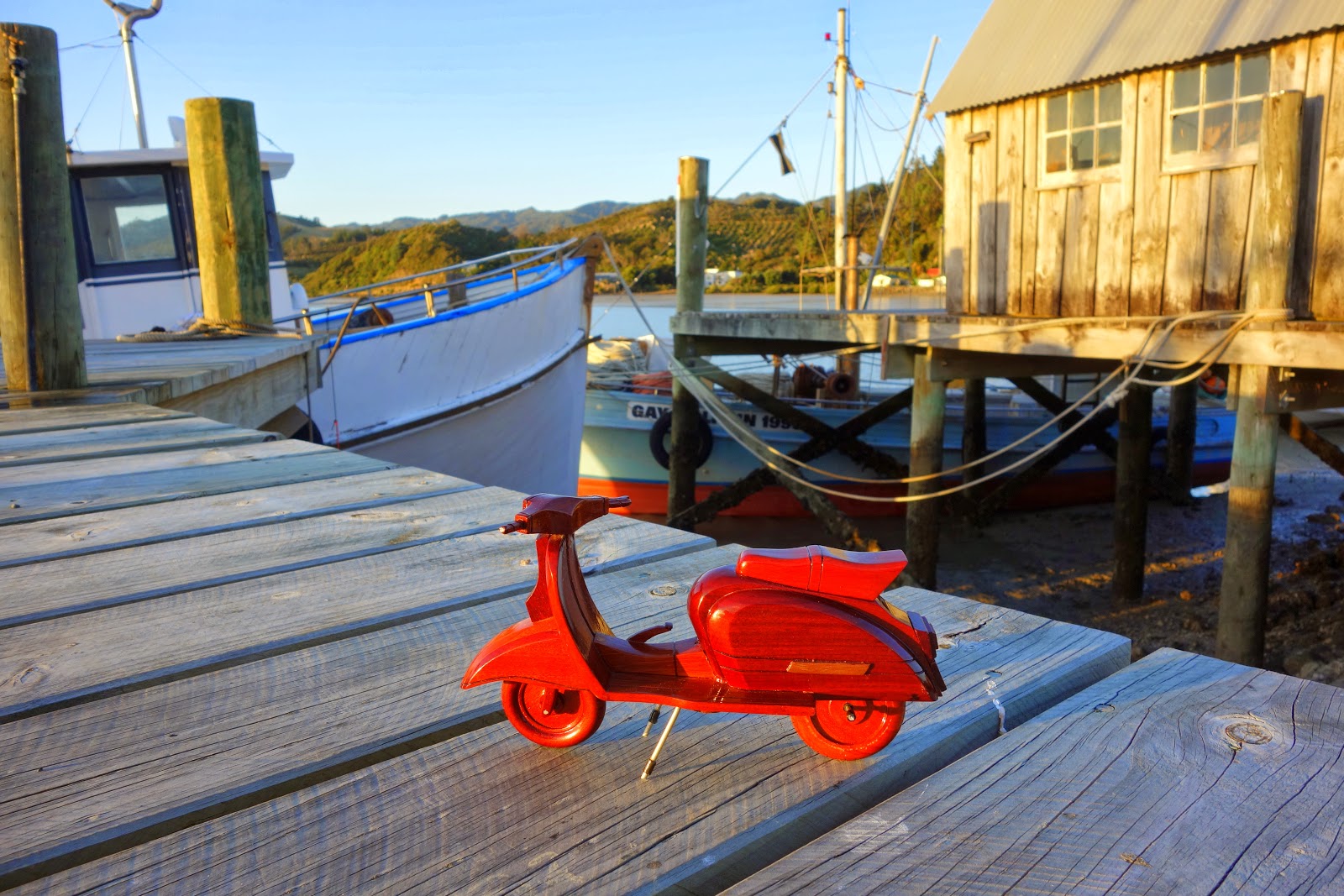 SB checking out the local fishing fleet at sunset 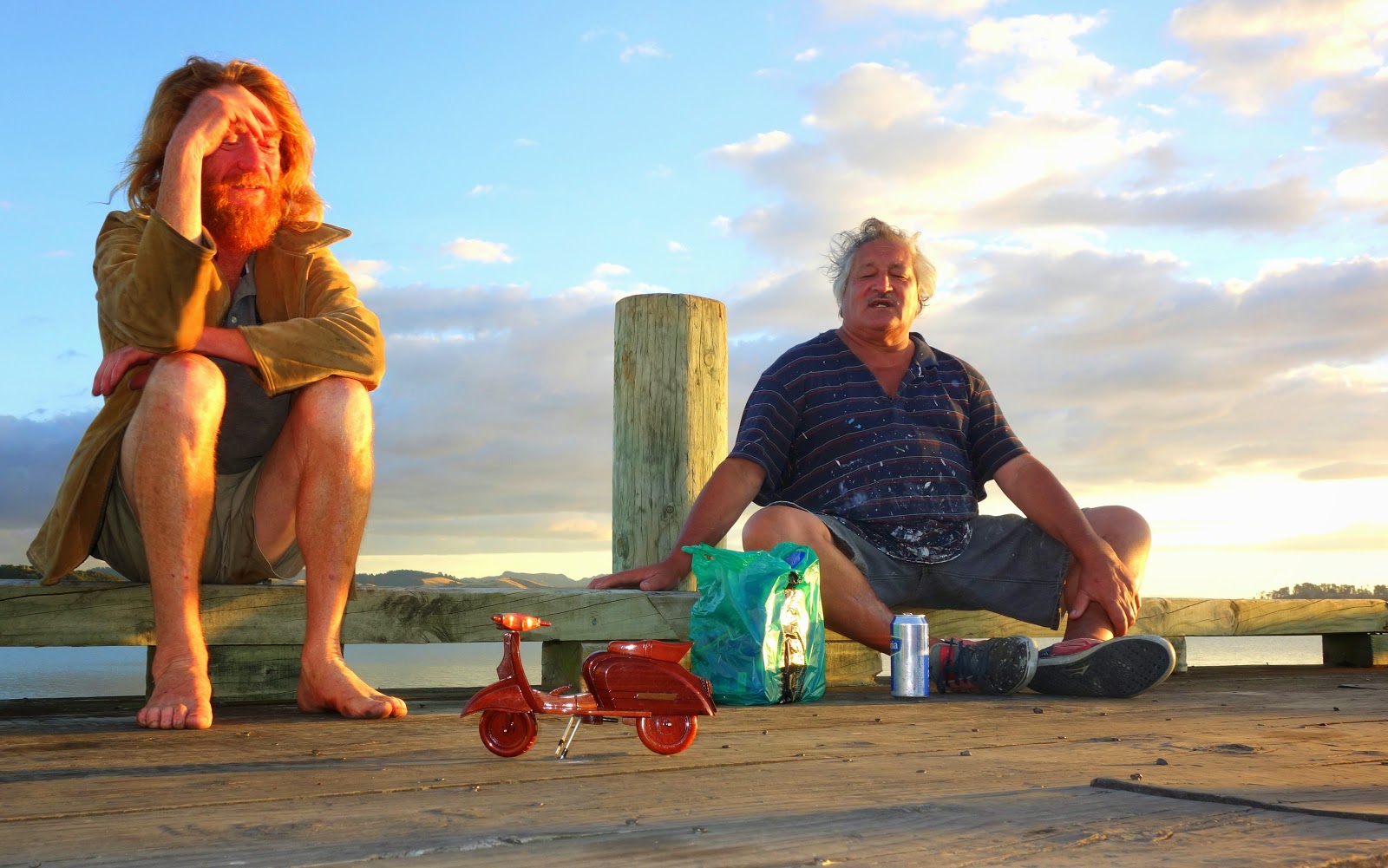 After meeting some locals on the wharf, it was off to the lookout near our house to enjoy sunset over the islands in the Hauraki Gulf. 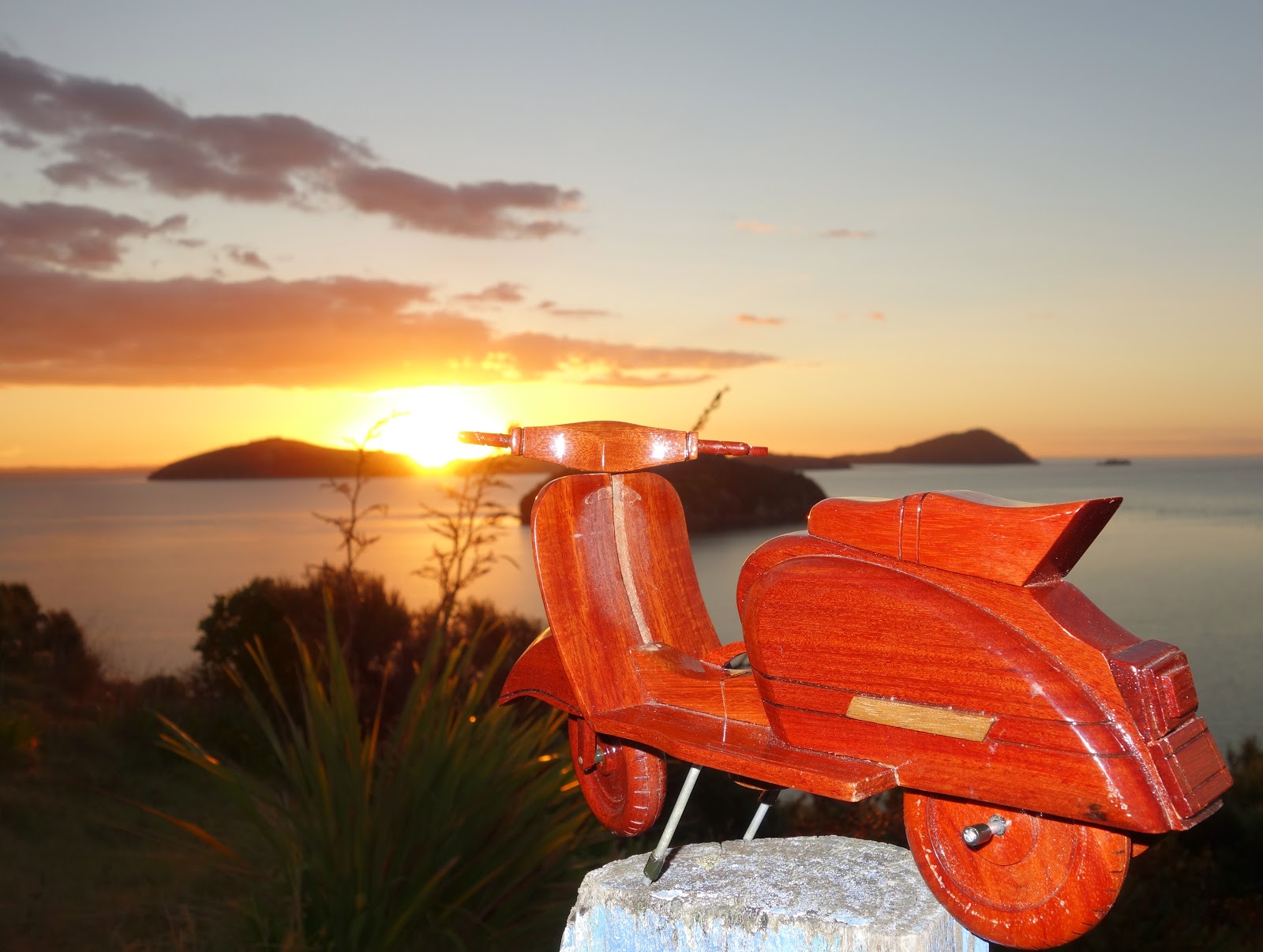 Sunset over the Hauraki Gulf

Unfortunately, the best-laid plans to go a little further afield were curtailed by dire warnings from the NZ MetService about the fast-approaching Tropical Cyclone Pam.  Mercifully, it passed a little further to the east than expected so some torrential rain over 24 hours or so and some boisterous winds were all we encountered.  However, it gave us the opportunity to take a couple of shots in less than tropical weather! 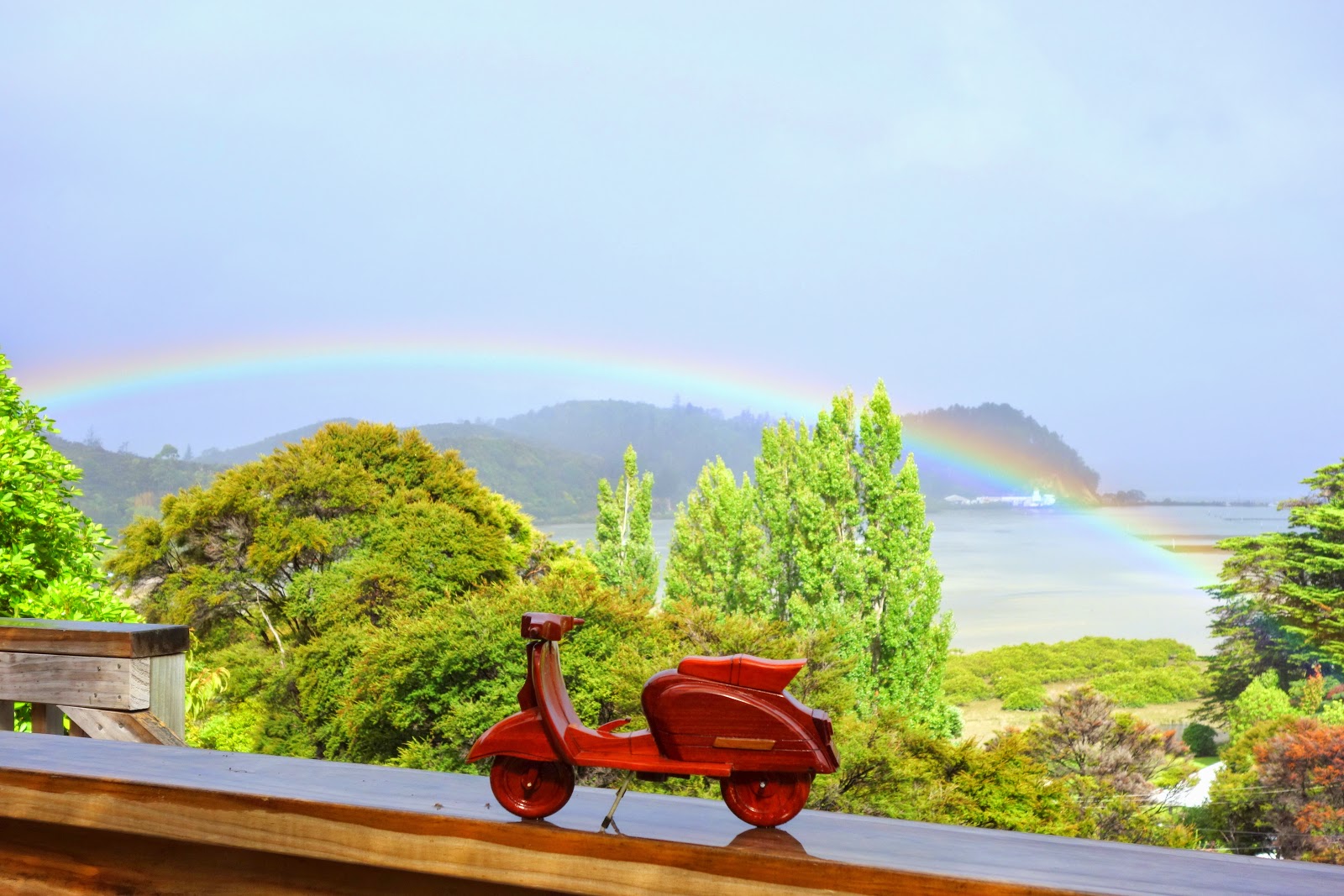 With the weather packing up fast, there was just time to nip down to the end of our road to show SB the building seas.  With his shiny coat of varnish, SB scoffed at the driving rain whilst I was getting rapidly soaked.  SB was far too gracious to call me a wimp, but I'm sure that's what he was thinking. 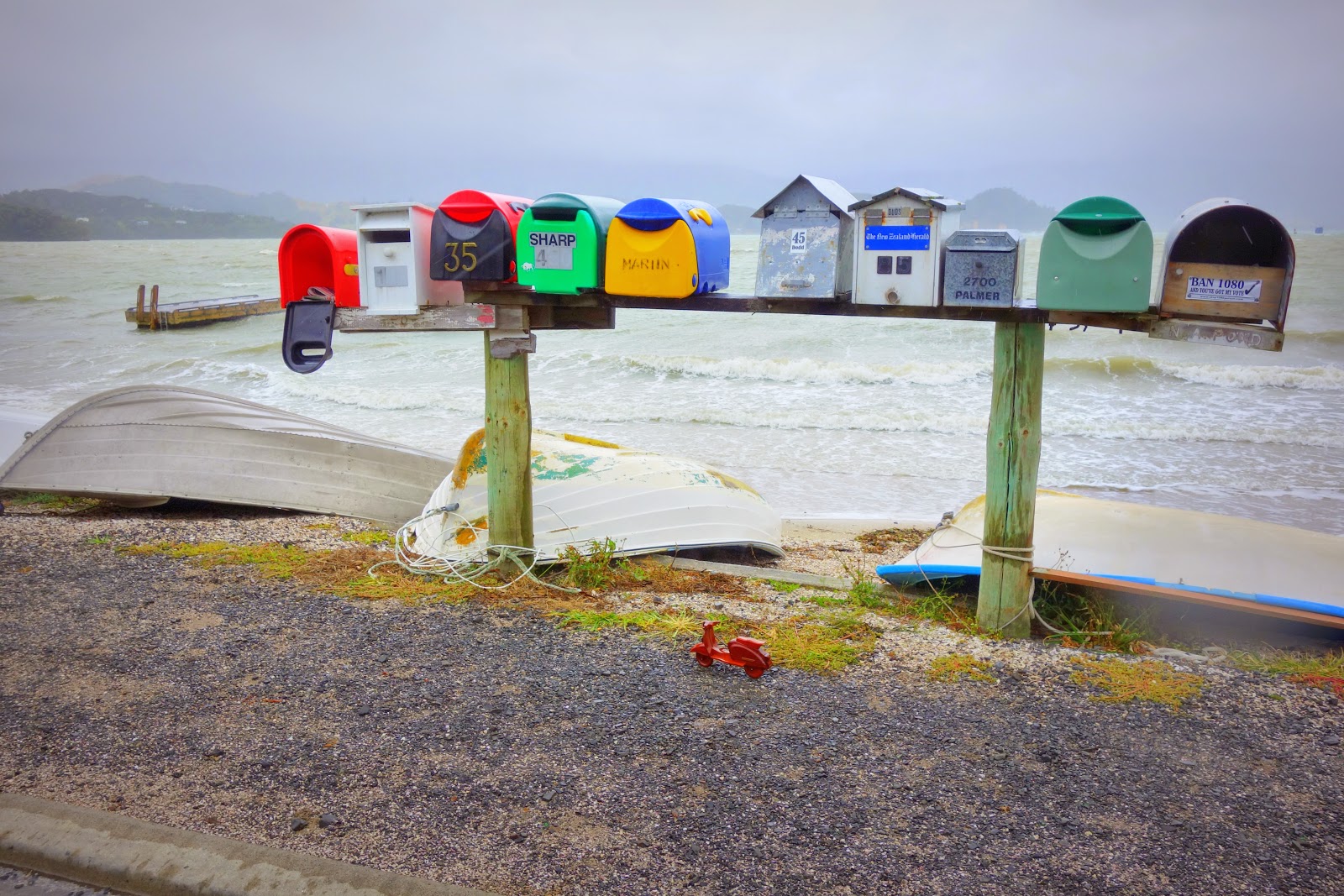 Seas and rain building, but SB enjoying the bracing conditions

With normal weather returning, it was time to venture a little further afield and introduce SB to some close friends who live not far from us.  Paul and Julie are lovers of British classic vehicles.  Julie drives an immaculate MGB GT V8 which was in for a service when we visited.  Paul is a dedicated Norton enthusiast and Secretary of the NZ Norton Owners Club.  For everyday transport, he rides a 1951 ES2.  His ride for rallies and similar outings is a flawless Commando 750 fastback which he bought brand new when he was 19!  The other Norton is a Commando 850 racebike which owes very little to the original road-going 850 Commando and like most racing machinery, is a bottomless hole into which money is poured.  However, it is very, very fast, surprisingly reliable and Paul does extremely well in post-classic racing. 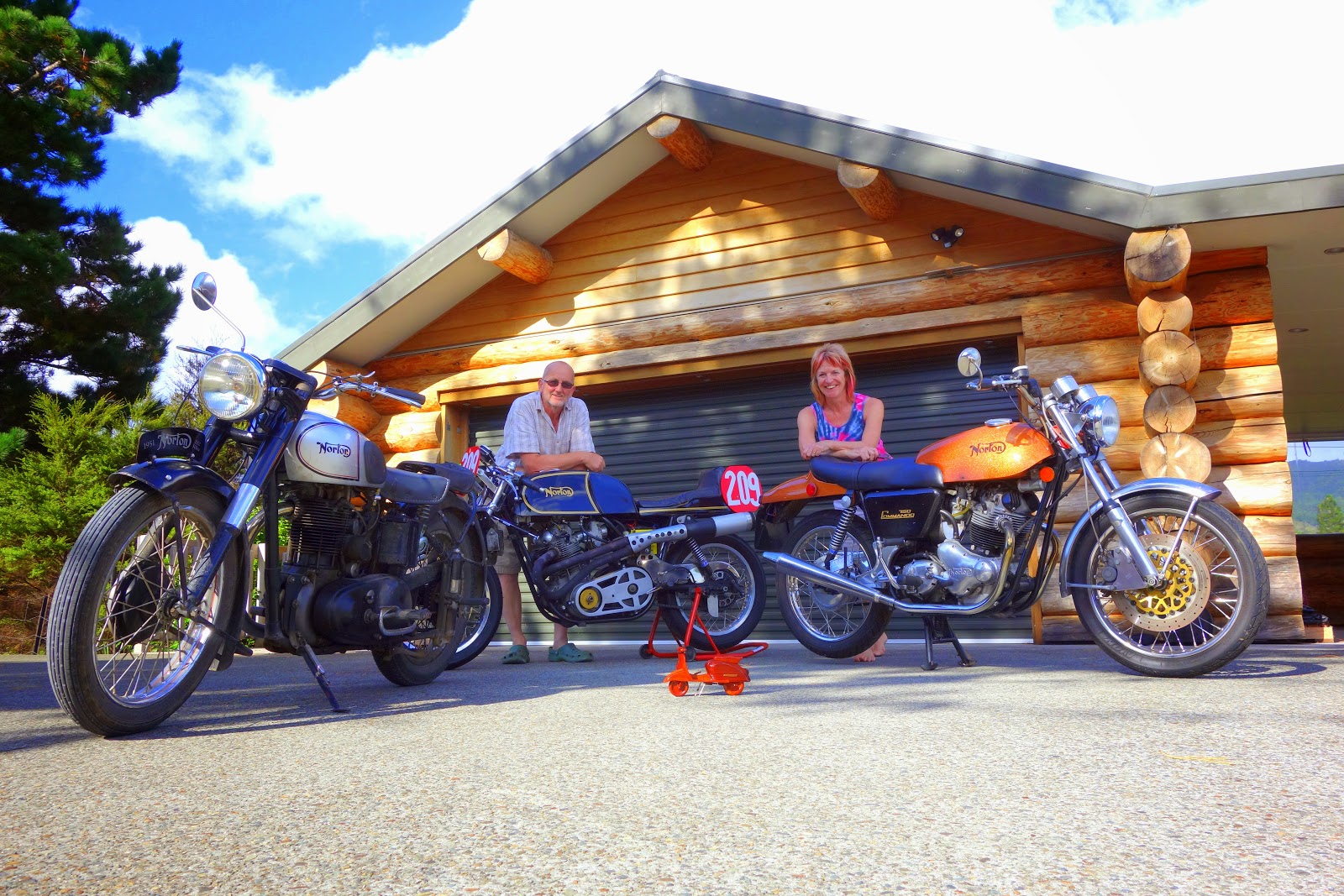 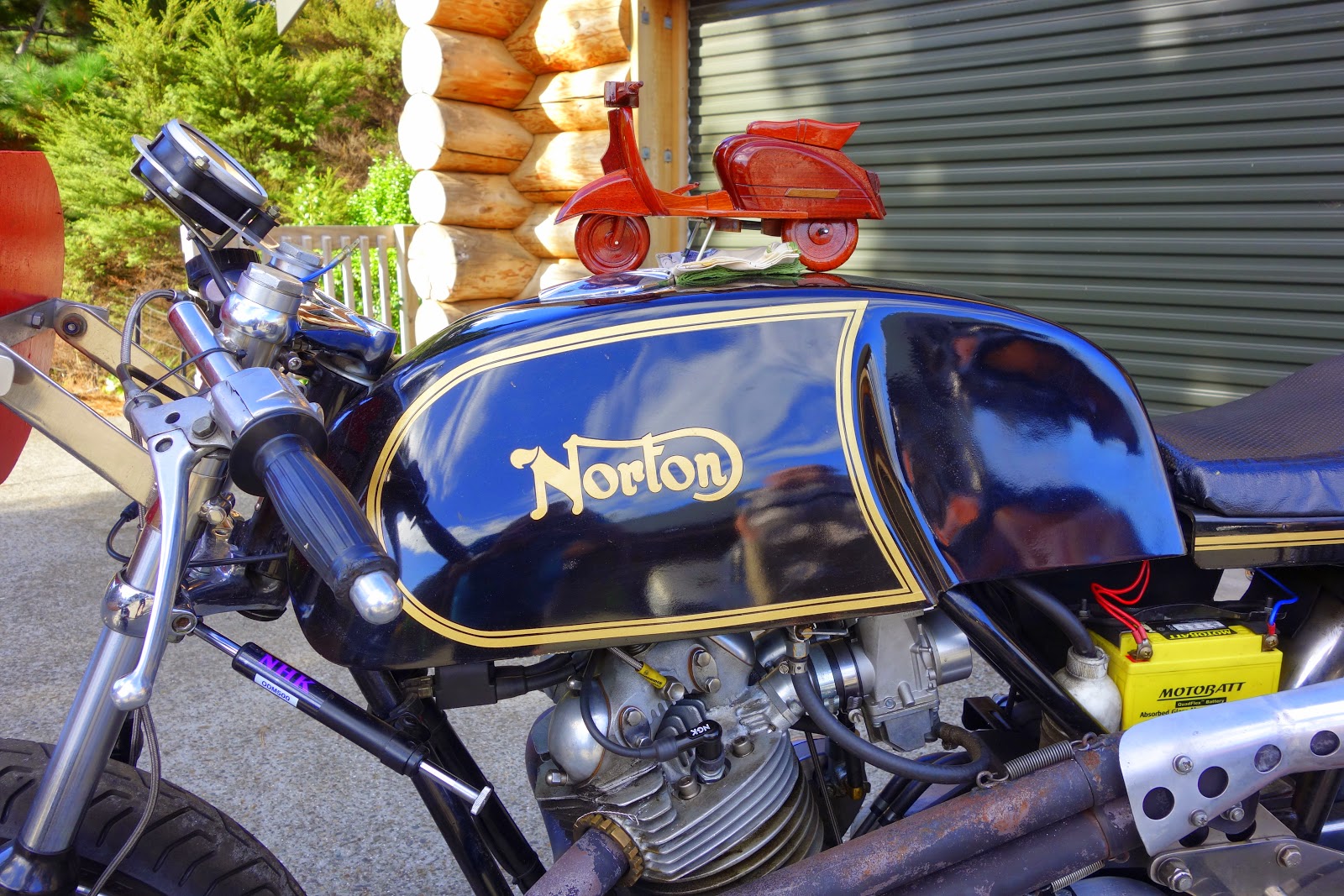 This summer has been really busy in terms of friends and relatives visiting us, both from NZ and overseas.  It was a great opportunity for ScooterBob from Canada to meet visiting English friends of ours who we hadn't seen for 42 years!  I've known Peter and Jane Miller since I was in my late teens.  Pete and I drag-raced bikes together in the UK, albeit in different capacity classes.  We moved to NZ  in the 1970's and Pete went on to enjoy ultimate accolades with an FIM-approved world record in the 500cc class over the standing start quarter mile with his supercharged, nitro-burning beast.  Pete and Jane are still motorcycle enthusiasts with a Triumph Thunderbird cruiser and a KTM trail bike in the stable.

As Bob really enjoyed his food, we thought that he would completely approve of ScooterBob being invited to a BBQ at home with Jennie, Paul and Julie and Pete and Jane. 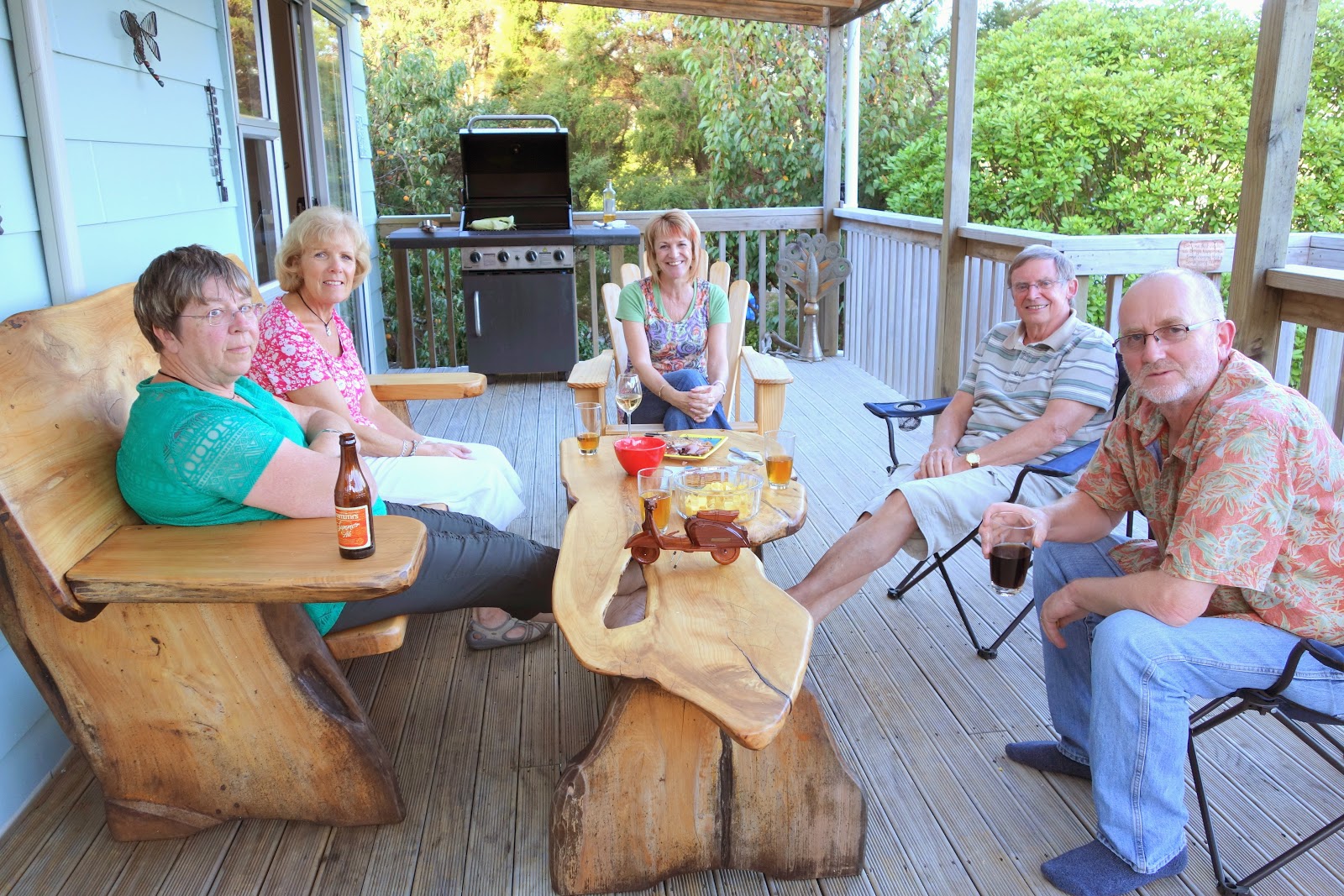 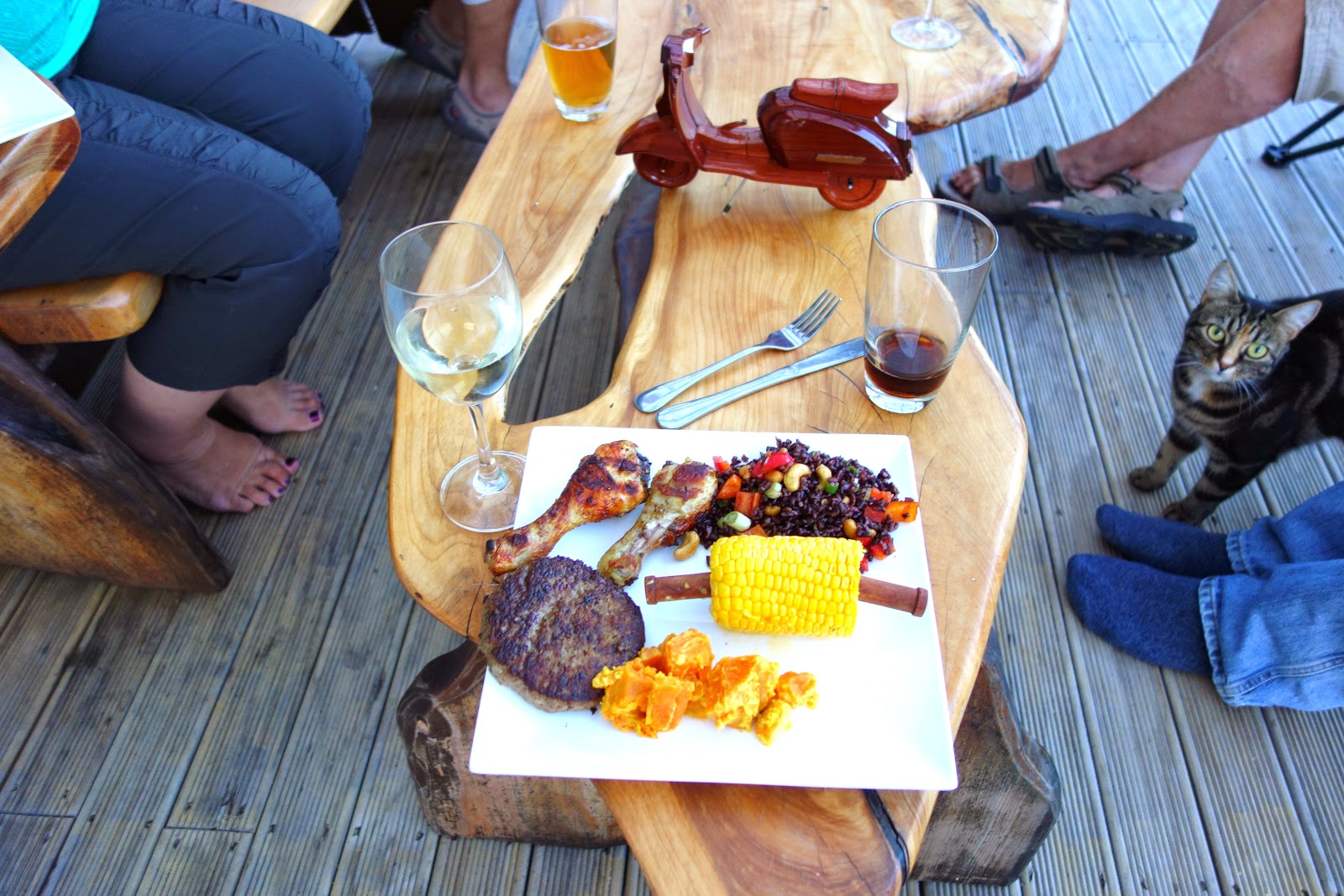 In the next instalment of ScooterBob in NZ, we venture further afield!