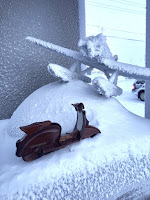 A little more wandering around town to see the sights. The plane crash of Will Rogers and Wiley Post was, literally, one of the first things I learned about Alaska. The actual crash site is a short ways west of town but there is a memorial set up near the airport which is named after them. The stone monument at the actual crash site was brought back to town last summer before it was lost to the ocean. There was a lot of frost and snow covering the modest granite memorial but in the second picture, I think you may be able to read the inscription if you zoom in on the picture. 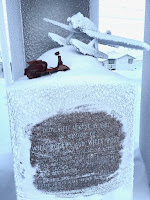 I had gone to town to see if I could get a view of the first sunrise since November but the southern sky was pretty overcast and you could tell that it was daylight but that was about all. I stopped at Arctic Grocery to take a look at their asian food selection since I was invited out to help a couple of folks make some California rolls and Mongolian beef. The selection was a lot smaller than it was during the summer but I found some items not carried at AC Company (the main grocery store). We made ten rolls with cucumber, carrots, eggs, shrimp and fake crab. No ripe avocados to be found (just like in Fairbanks). But still a nice, tasty treat. 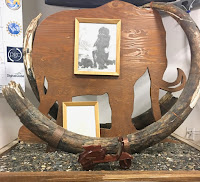 This mammoth tusk is on display in the lobby of the Barrow Arctic Research Center (BARC) which is the facility that I have been working on/in for over ten years. The grand opening was on June 1, 2007, and I had been working on the IT infrastructure during the design and construction. The glass case for this display has been broken for as long as I can remember so SB got an up close and personal look at the display.
I didn't take this photo of sunrise yesterday but a friend here in the building did. The length of daylight today will already be two hours. Quite the change from zero last Friday. 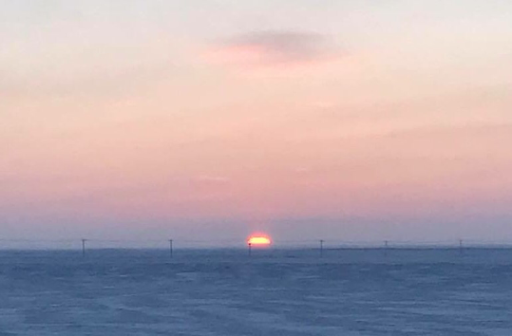