from the Wet Coast of British Columbia.  We have no snow here and sometimes it even stops raining.  The other day I was talking to Karen from Flatistan and she asked me if I had planned to ride my bike today.   During this time of year I have things to do and friends to visit.   I am still a chauffeur as Mrs Skoot broke her right wrist and is still not allowed to drive so I have to pick her up from work so free time is limited and just not worth the bother of digging my bikes out. 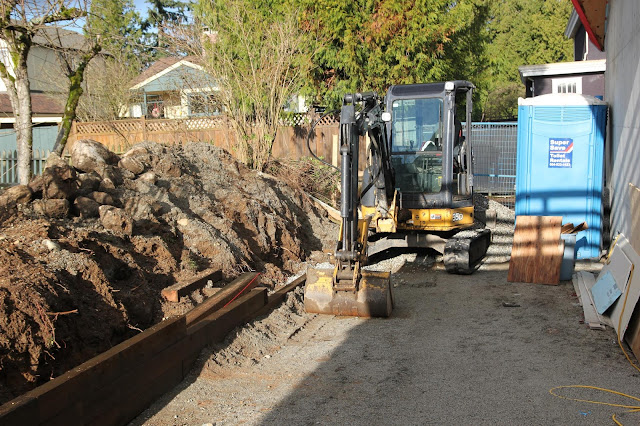 It is even a challenge to bring out our garbage container.  It just seems that every time our garbage day rolls around the contractors put another obstacle in my way 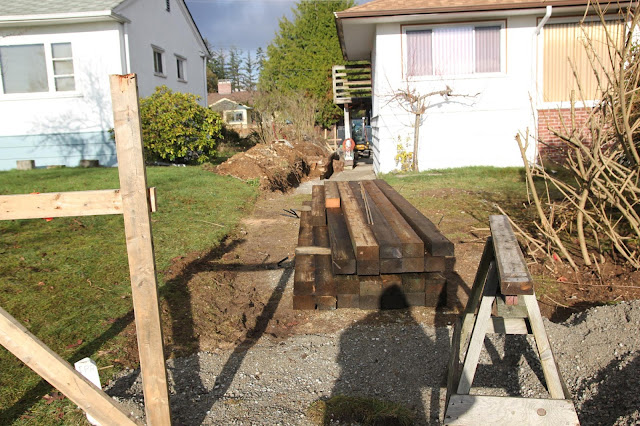 Even the front route is a maze of dirt.  The main problem is having to turn my bike around in the carport with all the sandy gravel which makes your footing not very secure 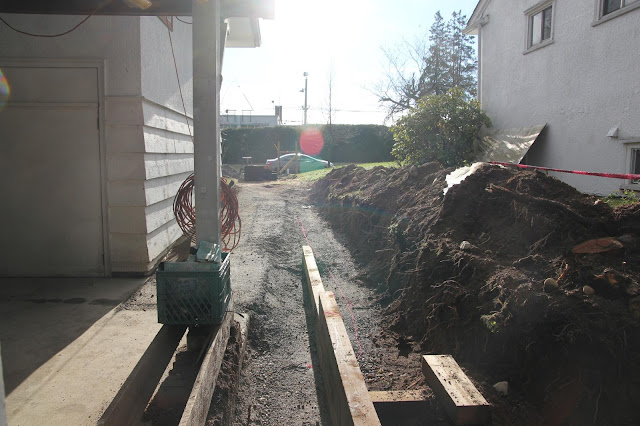 My narrow sidewalk has been removed and a new retaining wall is being constructed.  Eventually there will be a new fence and the gate will be full width to make it easier for me in the future.  Except for the early morning hours when there is frost, it usually burns off by noon with temps around 5°c, so it is possible to ride your bike nearly all year round, but not necessarily for those of us who have to leave early. 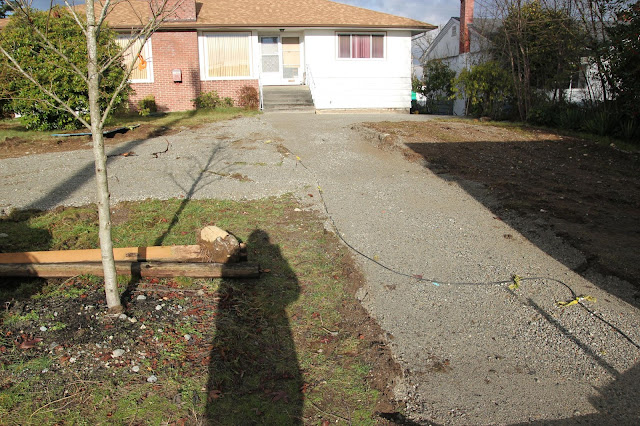 My front sidewalk is also a challenge with all the sand being dragged into the house.  Connecting the pipes to the water line meant having to remove the sidewalk and now a new one has to be poured when the weather warms up 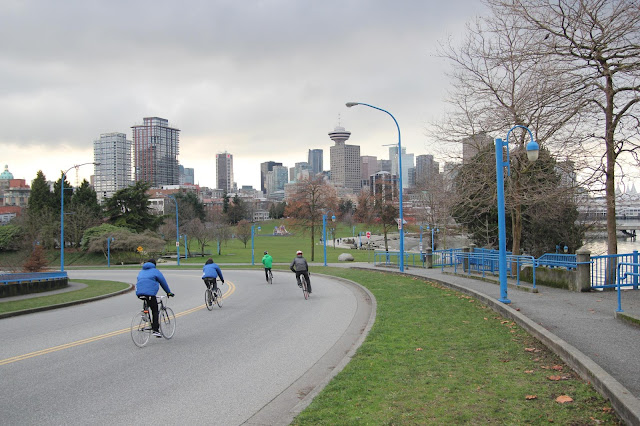 It was a bit cool and pleasant without the rain.  That revolving restaurant is Harbour Centre and was previously home to Sears, before they closed their flagship store recently. 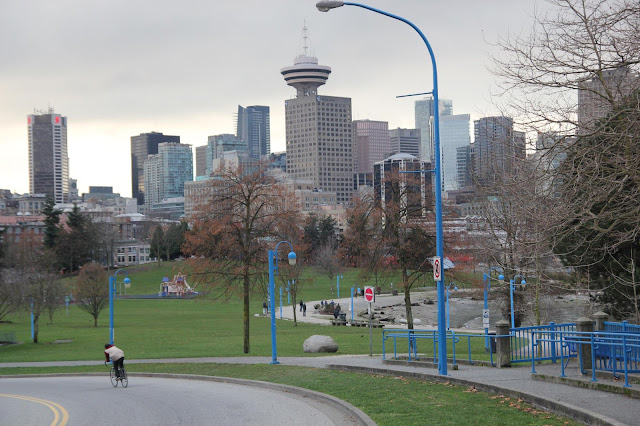 During the summer I often come down here on my bike, sit and just admire the surroundings 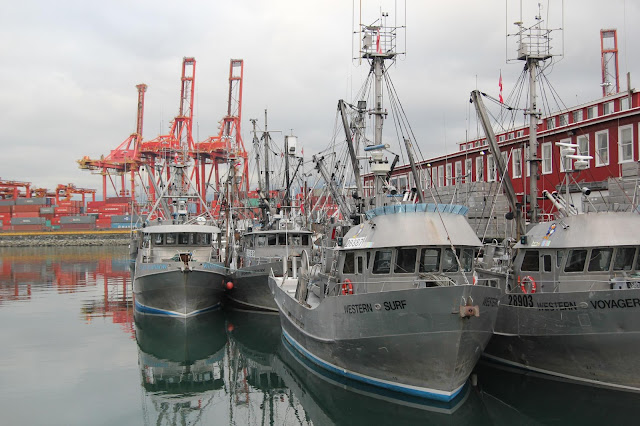 Just around the corner you will find our fishing fleet at rest, waiting for a new year.   Those orange cranes behind are part of VanTerm where cargo ships are unloaded.  Today they are idle and presumably enjoying a few days of rest during the Holidays

I know, it seems a while ago since I have posted any motorcycle content.   My blog is not always about motorcycles, it is about life, scenery, food and  sometimes a bit of photography which has been my hobby for nearly 50 years.   I know others have more than one blog and I know it is a challenge to keep them all going.   It seems to me like going to a circus and someone is spinning a few plates on a stick trying to keep them all spinning without falling off.  I prefer to just have one place to maintain and mix them all up.

I am looking forward to next year and making plans to GSWIHNBB.   New roads, new friends and new memories.  I am grateful for the chance to meet all of those I have met in the past and also for the opportunity for all of us to be together during our previous iMBC reunions.  There is nothing better than to have friends and thanks to the internet I would like to think that we have friends all over the world.  Yes, friends we have already met, and those "to be met" and even though we are separated by great distances I know that when we meet, it will be like we have never been apart.

Right now Roger has arrived in North America and hiding out in Atlanta, GA.  I have never met anyone from NZ yet but when we spoke on the phone the other day I told him that we needed a translator for I couldn't understand a word he was saying, but when he spoke slower for me and I think I caught the gist eventually.  I know we are going to have a good time in SFO next weekend. 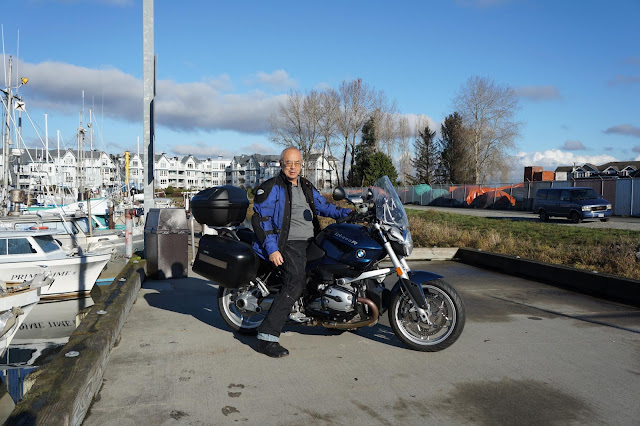 I wish you all a very Happy New Year and I am hoping our paths will cross sometime soon.  I also thank you all for being such faithful readers