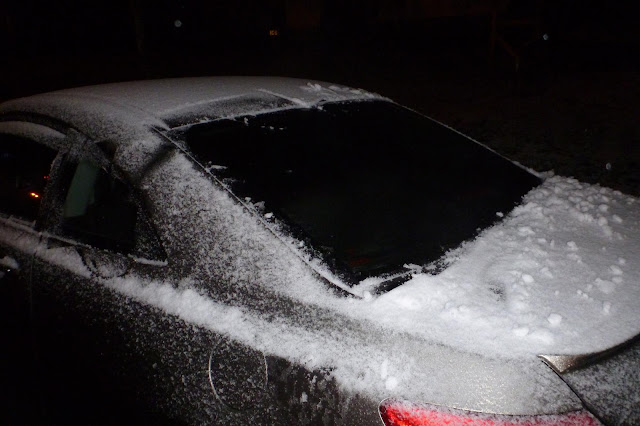 The snow was stuck to the windshield like frost and I had to scrape it off.  The roads were mainly clear until I was about half way to work when it turned to white 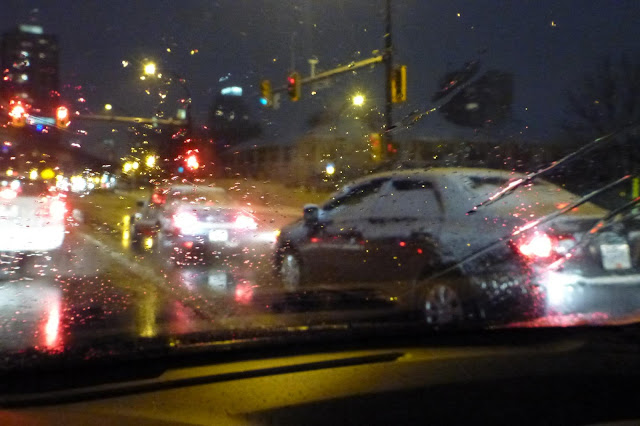 I just don't understand how some drivers can just hop in their car and drive blindly down the highway without clearing their windows.  They are a hazard to others 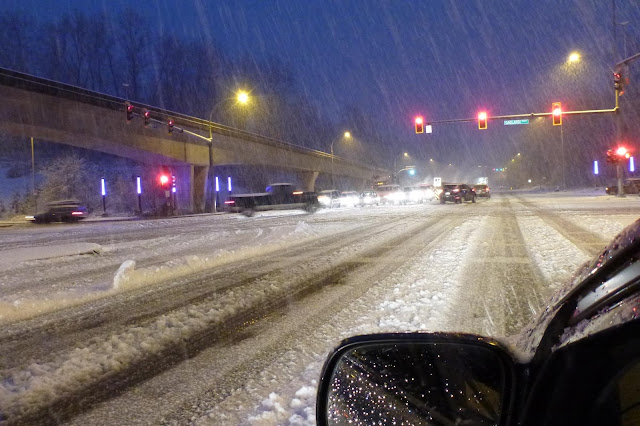 Unlike dry snow, ours is wet and with the frozen pavement there is no traction.   I have 4 snow tires installed and even on the flat portions I was slipping as I started  from a standing start 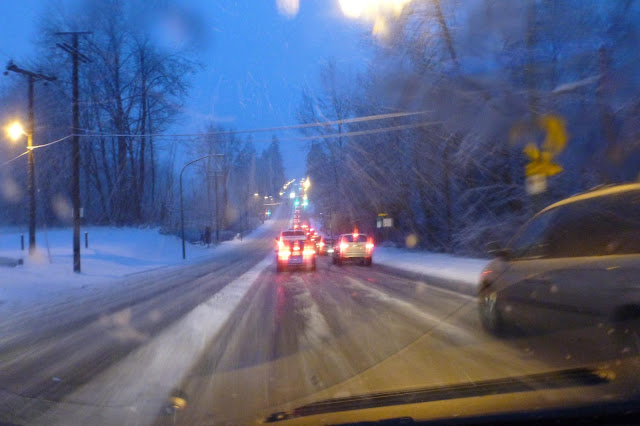 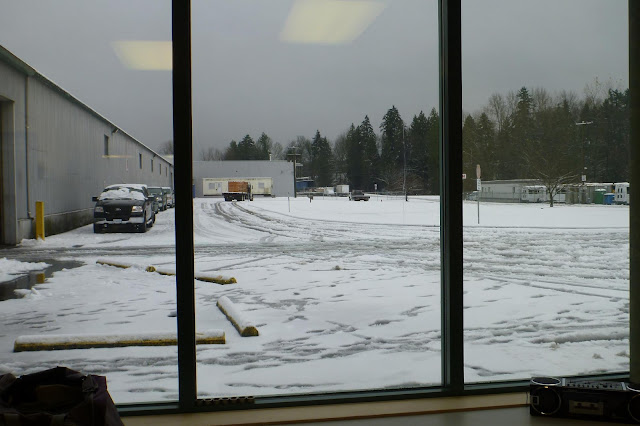 Here is a view from my office.  Nice and bright, much better than our dull, rainy grey days 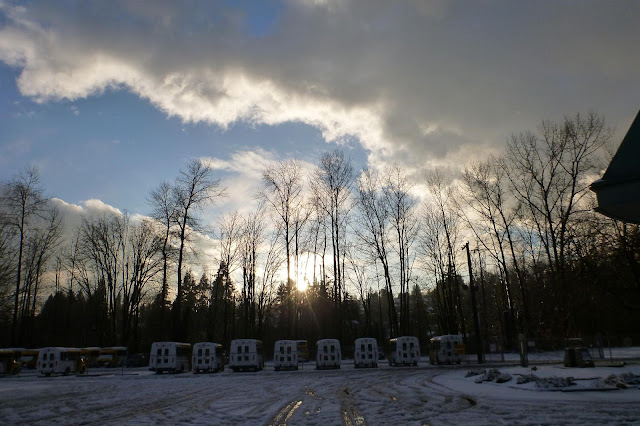 Sunrise as I arrive at work.   This is one of those rare sun shots 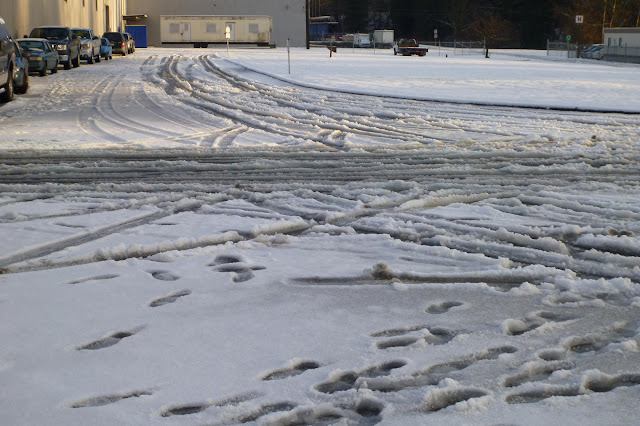 Before long our clean snow turns into a messy slush .    This morning it started out worse than yesterday with more snow accumulations.  As usual, I clear off all the snow from the hood, roof and trunk areas 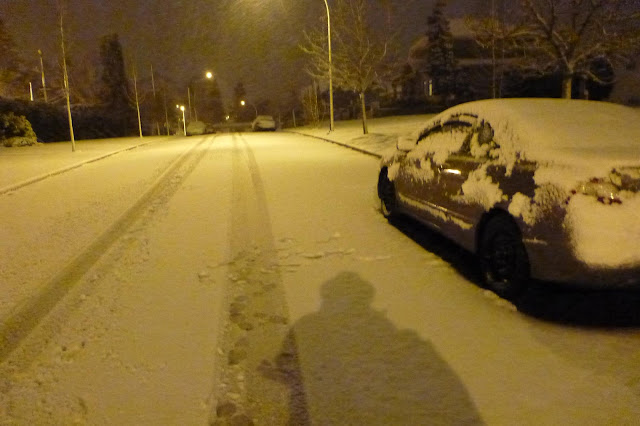 but there was no frost to scrape.  The snow layer came off easily but the roads were very slippery as I spun my tires all the way around the block on my way to the main road 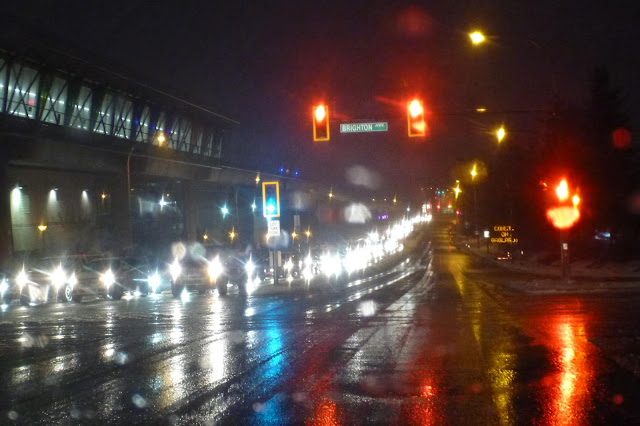 but as I neared work, the roads were nearly bare.  There was a heavy snow warning forecast for later in the day and it started to snow around mid-day.   We had so much snow in our area that we had a power outage around 2pm, but unlike SonjaM ,  we had to remain at work.   We are computer dependent and there is nothing that can be done manually so we had to sit in the dark.   We had no phones, and no computers.  I was lucky to have my office chesterfield (or settee, divan, davenport, couch, or whatever you call it) where I took off my shoes and had a short nap until the power came back on about an hour later.

After work it was a challenge to get home with all the accidents, downed power lines, and closed bridges.  My afternoon commute has doubled since Mrs Skoot can't drive due to her broken wrist, so I have to leave my office in Coquitlam, drive through New Westminster and Burnaby to arrive in Downtown Vancouver to pick her up and take her home.   I have one busy serious commute to get myself downtown, and then another maze of traffic to navigate in order to get home.  It takes between 1-1/2 to 2 hours by the time I leave work and arrive at my front door.  Hard to believe that it takes this long to travel only 36 kms but we have no fast way to travel through our city due to lack of freeways

Now that we have arrived home I have to change into something more comfortable (get rid of shoes) and start a simple meal.   The hardest part of meal arranging is to decide what to make.  Today is pizza night 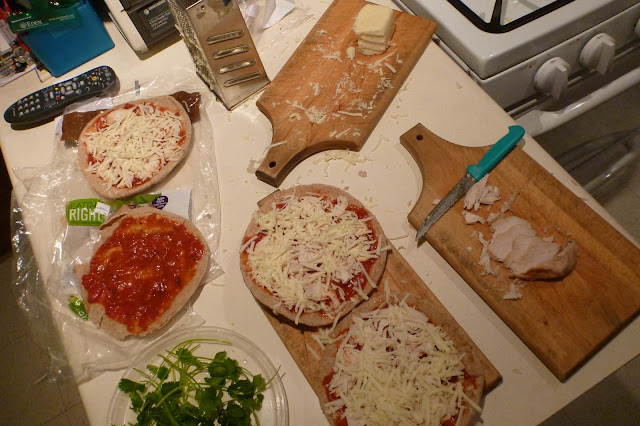 I turn OUR counter into a pizza production line.  I bring out OUR cutting boards, and OUR kitchen knife.  To cut down on carbs we use whole wheat Pita Bread.  I use left over chicken cut into thin slices.  I put on a tomato base, then the chicken and add Mozzarella cheese 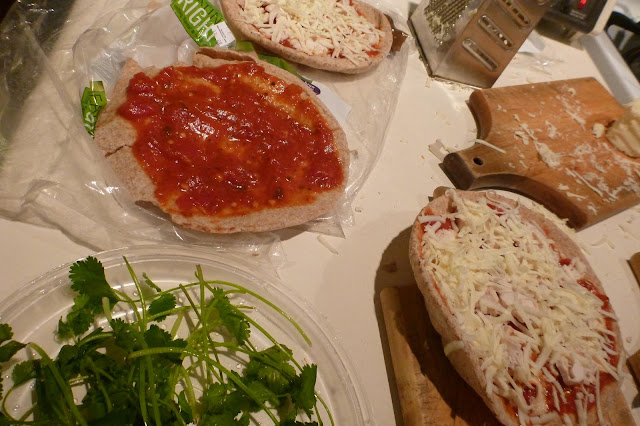 I have enough to also make one each for lunch tomorrow 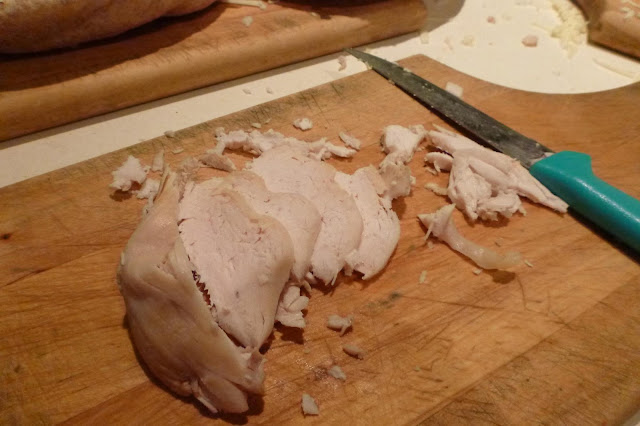 The chicken is a left over from yesterday.  A BBQ supermarket chicken which cost $7.99 which we had for dinner yesterday along with two ears of corn each .   So for a low cost we had enough for two dinners and one lunch 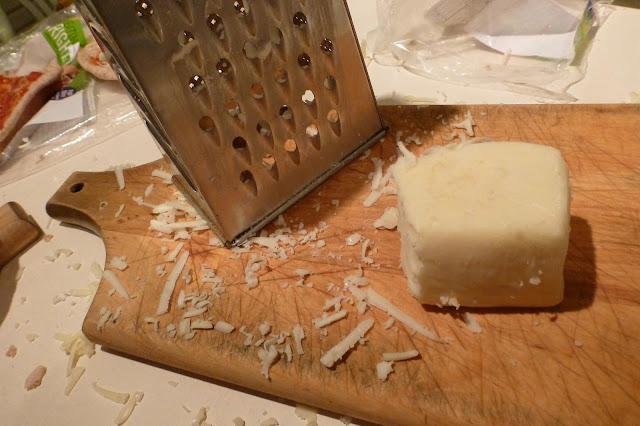 I use OUR hand grater to shred the cheese 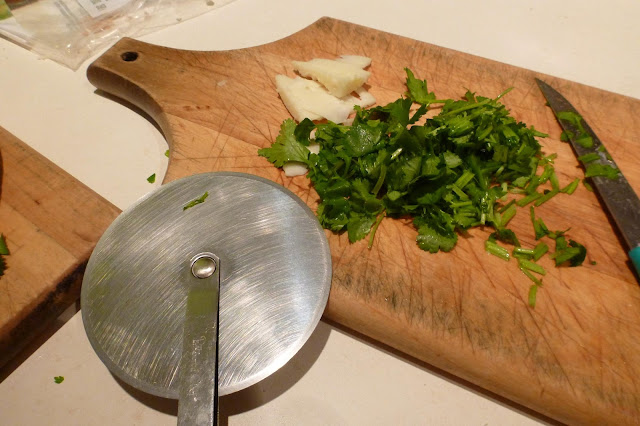 and I just love Cilantro  (aka: chinese parsley) 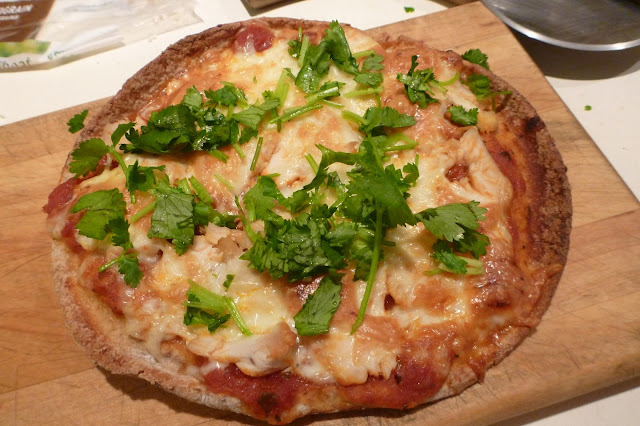 Since these pizzas are so small, we use OUR toaster oven.  I pop the first completed one into OUR toaster oven as I am still producing the others and when it is done, I sprinkle the cilantro on top 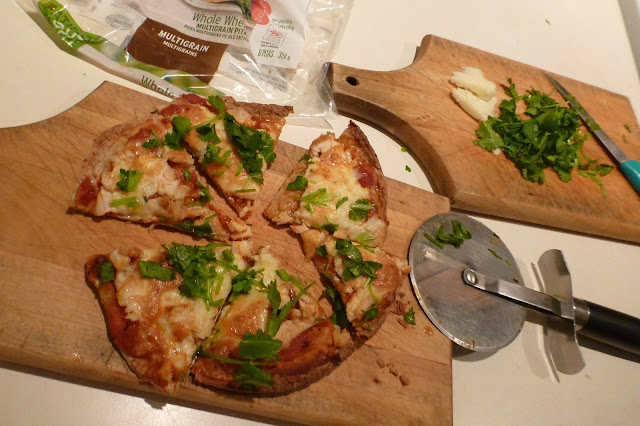 OUR Pizza cutter does a fine job of cutting the pizzas into segments.   For portion control I usually make 3 pizzas which we split evenly