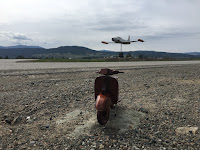 This airplane on a stick was in Princeton, BC, at the local airstrip. I thought it looked kinda cool and a good Scooterbob backdrop. Shortly after this picture was taken, we were across the border into Washington headed for the Hood River. I met with YouTube RV vloggers (not moto-vloggers) Tom and Lori who were workcamping as campground hosts for the Toll Bridge County Park. I have not met very many retired couples before who were full time in their 5th wheel RV so it was an interesting conversation. 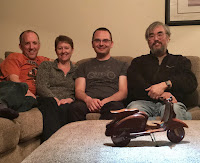 After a stop in Vancouver, WA, to unload stuff from the truck. I headed down to Corvallis, OR. On the way I picked up moto-blogger, ChrisL of everydayriding.org, at the Portland airport. Dropping him off turned this from simply a hand-off to a moto-blogger meetup. Scooterbob is now onto new adventures with Troubadour and Trobairitz (they're the ones on the left).
BTW, I couldn't figure out if it was ScooterBob or Scooterbob.
Posted by RichardM at 10:13 PM