It turns out that my dry Final Drive spline appears Okay.  There are no metal shavings and the splines look to be in good shape, only a trace of white grease in there from the factory 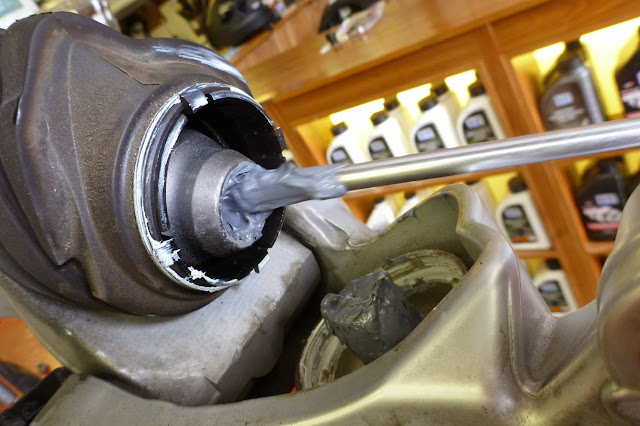 I was reading some BMW forums and the best stuff to use is Honda 60 moly which I had to special order from my local Honda dealer and it had to be shipped in from Calgary.  As Richard mentioned, there is not much flexing on my R1200R.   Originally the factory made mention that this did not have to be lubricated for the life of the bike, but due to drive line failures on their GS models they revised their recommendation to lube the splines every 2 years or 40K kilometers.  So for now I should be okay for a while 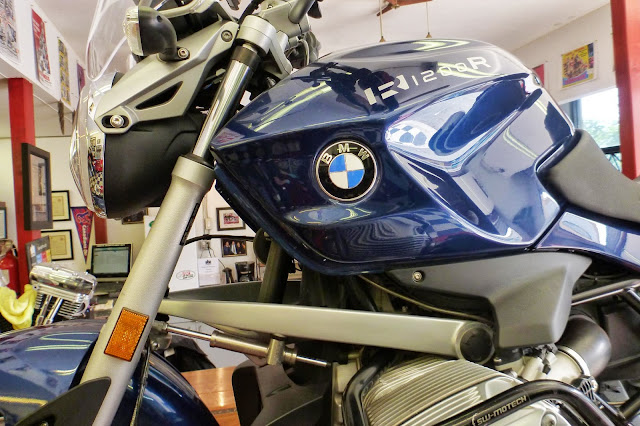 I was also going to replace the 4 plugs (2 per cylinder) but my R uses the 2 electrode model and I have to get them from the BMW dealership.  Then I was going to have new brake pads; front and rear installed 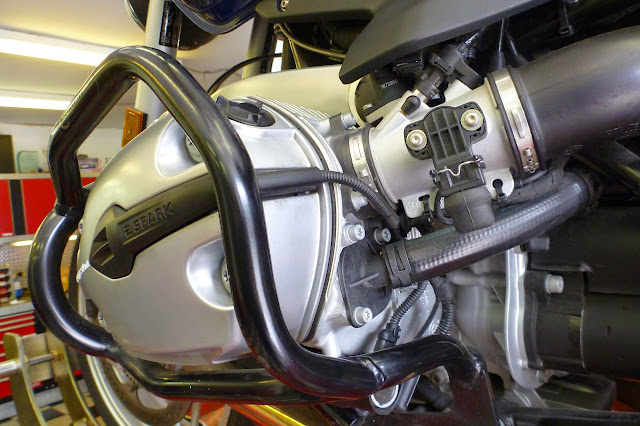 I had them order them in last month so that they would be "on hand" but it seems that they must have sold the rear set.  Upon closer inspection my brakes are both nearly new and it was their opinion they should last for my trip this year. 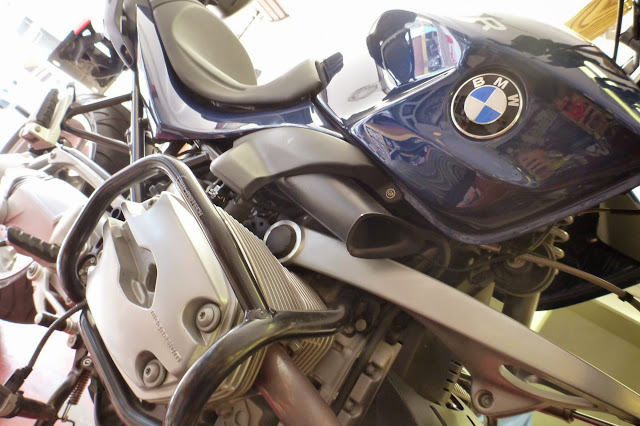 so the plugs were removed but then re-installed. 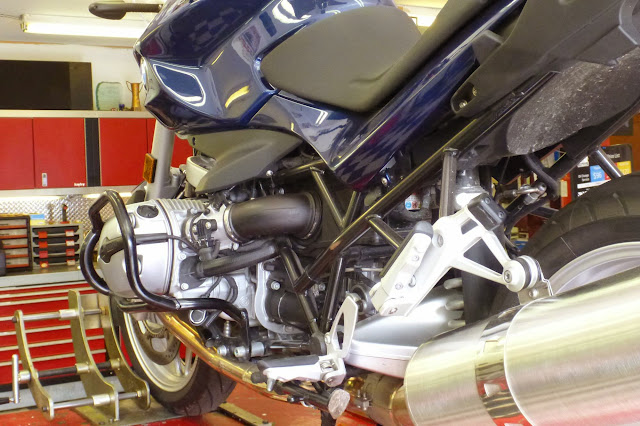 The exhaust is re-attached and my bike is bolted back together so I can head on my way.   I ordered a new battery which should come in next week.   I am trying to replace anything that needs replacing so that I don't have to worry about these things whilst "on the road".   Except for oil/filter changes I should be okay 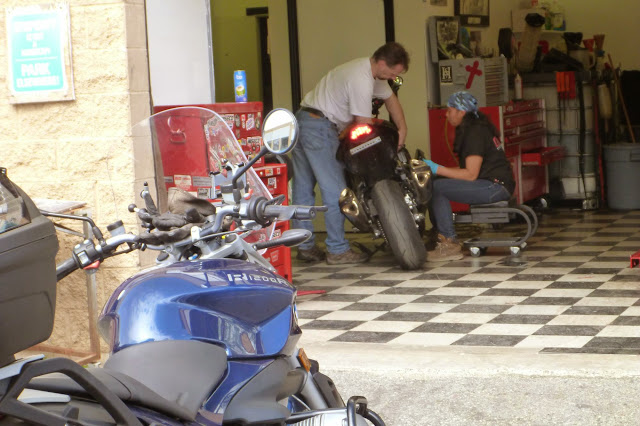 I now prepare to leave and head home.  I still have to do some grocery shopping as Mrs Skoot has requested what she wants for dinner tonight.   I decide to park my R1200R and head out on my 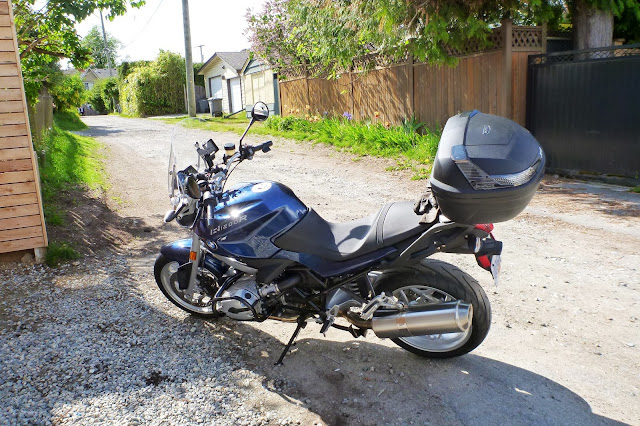 Vstrom.   I am still not used to riding my R and I am a bit unfamiliar with the querky signal light system.   I mean why can't they use one button on the left like everyone else.   Sometimes I just don't bother to change lanes because my right hand has difficulty pushing the "signal off" button while turning the throttle at the same time.  I must have small hands 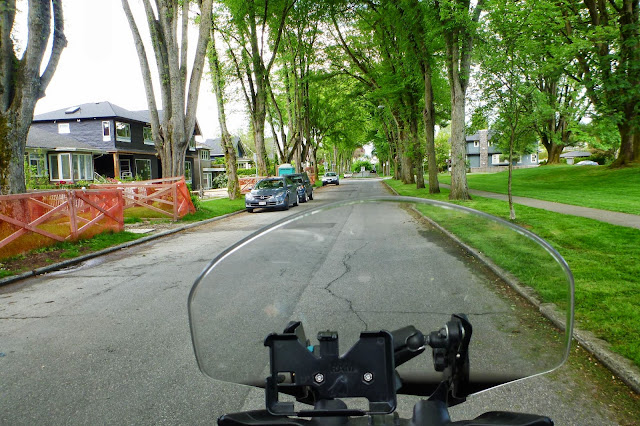 Here I am riding my Vstrom home with  groceries in my topcase.

I am getting my R ready for my trip this summer and I purchased a special Garmin power cable. 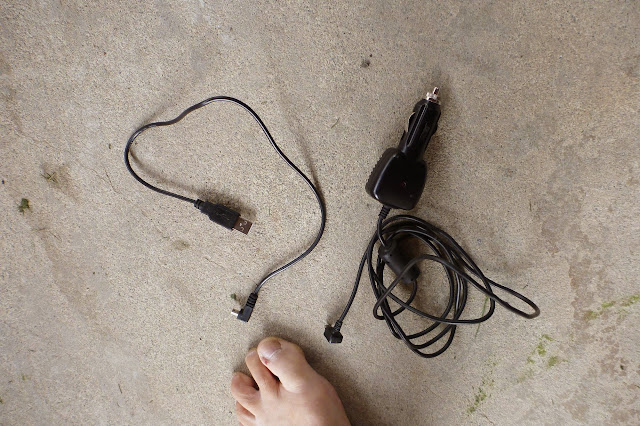 The cable on the right is the standard cigarette lighter power cable with the mini USB on the other end to power my older model Garmin.   A standard USB cable will not work as then it goes into USB mode and will not charge nor power the Garmin GPS unit.    The cable on the left is the special cable which is powered by a standard USB plug 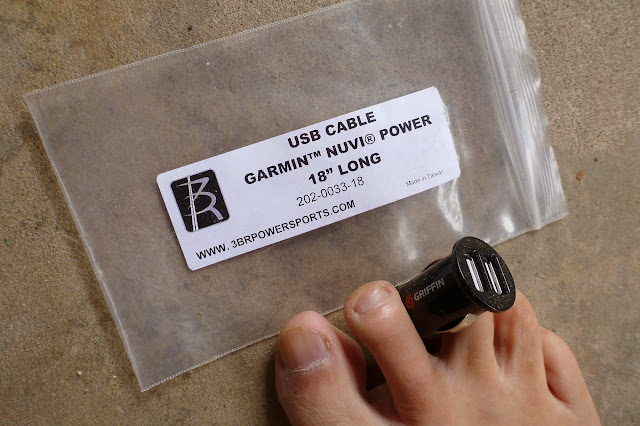 It is made by 3br powersports, and here I am holding my dual USB adapter 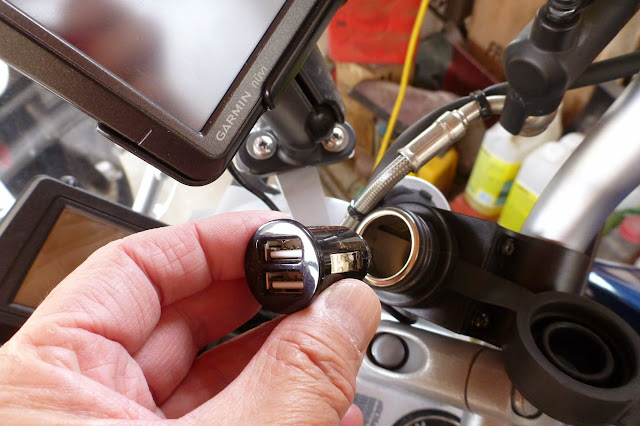 I wired a cigarette lighter socket onto my handlebar to power my Garmin but the supplied adapter cable is very large.   This is where I plug in my USB adapter.  I have two outputs; one for my Garmin and the other can be used to charge my Sena BT headset when I am parked for lunch.  I am trying to switch over to USB power cables whenever possible 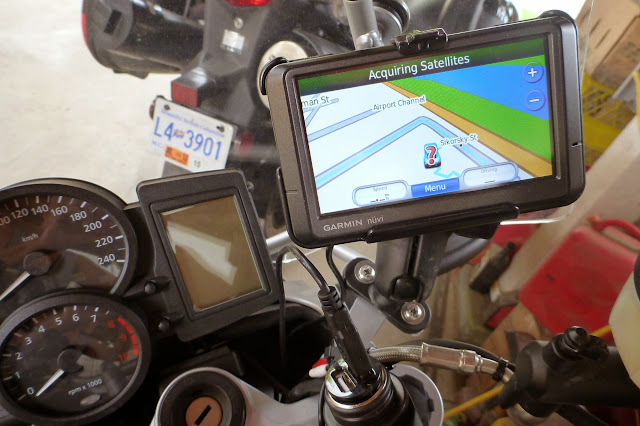 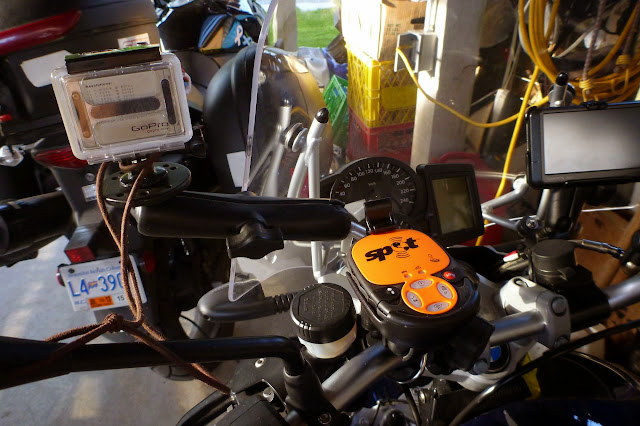 I also received a shipment of parts from GPScity.ca so I wanted to mount my Spot2 GPS messenger

Another thing that has been bothering me is the large amount of buffeting I get from my Cee Bailey windshield.  So I get out my tool kit and remove the windshield 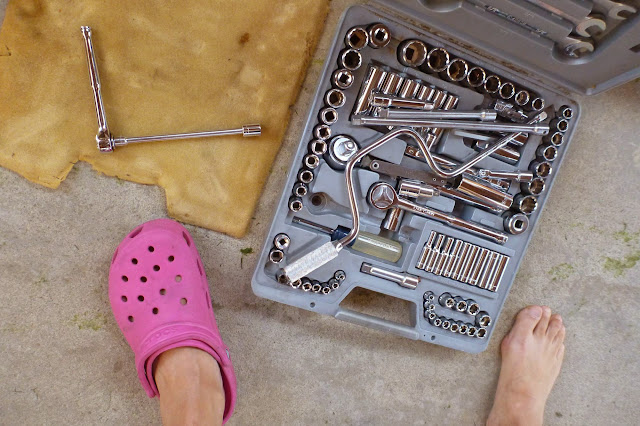 Most, if not all fasteners on my BMW are Torx bits of various sizes so I bought a set to carry with me 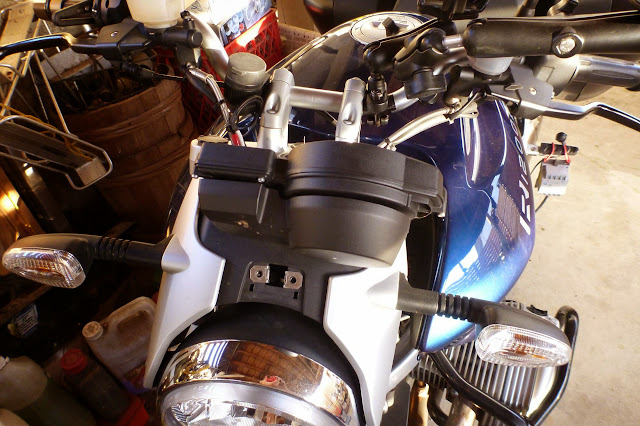 The R1200R is a naked bike.  Here it is devoid of windscreen.  It is held on by a bracket on the front, and two torx screws at the rear 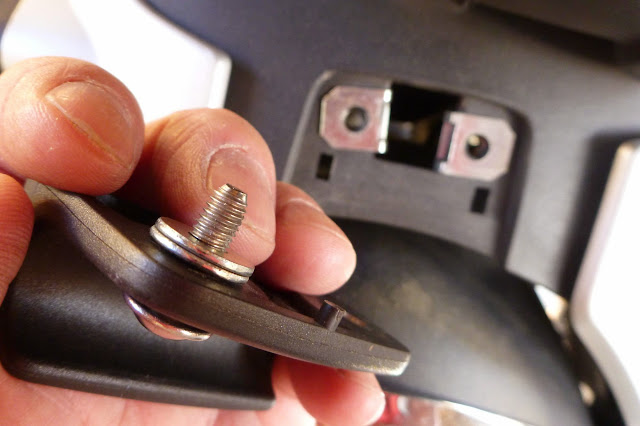 I thought that if I could put some shims under this bracket that it would force the windshield to rake backwards a few degrees and let some airflow come under the windscreen from the front.   I only had 4 washers and I think I may need a few more and perhaps a longer screw.  I still think the windshield is too vertical and creates wind being aimed directly into my helmet and this creates a lot of noise 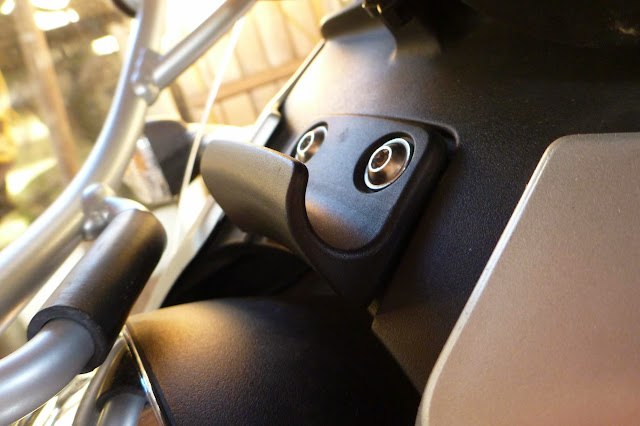 Here the front bracket is back in place and you notice where the windshield bracket goes into that U-shaped part.  That is all that is holding the leading part of the windshield frame

I get a bit antsy when there are chores to be done and my grass waits for no one.   It is actually too high for my mower and it struggles, 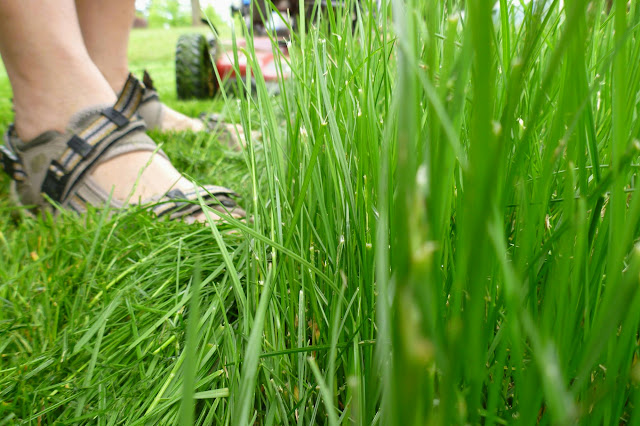 but I eventually got it done