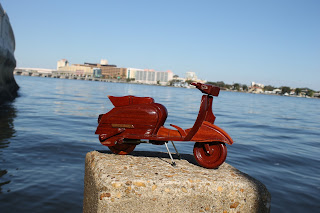 Scooter Bob has been patient with me so far.   He didn't even complain when I jumped in the car and strapped him in.

I know he rather ride Kimmie down but where I wanted to go it be easier to take the car and park it rather than deal with the straps, jacket, his box and a few other things.

Earlier this week I promised him we would ride around the bay and show him a UFO.  I've ridden Kimmie on Bayshore Blvd in Tampa before.   I think almost everybody in the city has driven this stretch of road at one time or another.   It's a lovely road with the Hillsborough river and the bay on one side of the road, historic and beautiful homes on the other.  It can be bumpy and nasty in parts but what city street isn't?

The city is invaded by Jose Gaspar and his Pirates once a year and Bayshore is the street the crew of the various ships in his fleet parade down.

Scooter Bob and I started to walk up Bayshore, it's a popular place with joggers and bikers since the road not only has a good view of the bay and the city but a lot of distance between the road and the traffic to make walking and other things safe.  Their is some dispute on the issue but it is supposedly the longest continuous concrete walkway in America.

This is one of the "go to" places I have when I bring people to Tampa.  It's always a lovely day in the city and the view really is wonderful when you're on a bike.  I'm sure Bob would have a smile ear to ear riding it.   As would anyone.

We crossed the street and started walking back to where I parked the car.  Scooter Bob seemed to be enjoying some of the million dollar plus houses and their views of the bay and the city.   A lot of those houses dated back to the 1800's.

I love and respect the past, and in a lot of ways I wish others shared my love of the past.  Sadly I live in a state where someone where tear down a lovely historic 1830's home and rebuild it by putting in a modern all glass monstrosity.

There was still one more place I wanted to stop.  This is not on my "Go To" list because frankly its part of an "adult entertainment" establishment.   However the UFO on top of the club is one of the last examples of Futuro buildings.   Futuro was a "fad" in the field of Architecture in the late 1960's.   UFO's and space travel were all the craze so it's no wonder that some people would try to make a UFO home.

Tampa had at least two of these homes within city limits at one time but one was destroyed by the city and the second one....well that ended up being the VIP lounge I understand. 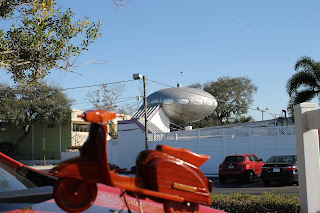 I'm including it here however because it is so rare and unusual it deserves recognition.  The fad of the Futuro home was exactly that.  A fad and they quickly passed into history.  Still though it's an interesting and unusual story.  Plus how often does one claim to see a UFO in broad daylight?

Bob and I headed home.  Our next stop would be on the back of Kimmie and a bit out in the country.  But sadly this would be at least a week before our next adventure.   Say tuned as they would say.

Posted by The City Mouse in the Country at 5:00 PM