A Beautiful Day on the Coast

Last week I renewed my bike insurance.   It rained all week and for some reason Saturday was sunny and fairly warm for this time of year, if you can call 8°c a warm day.   I suppose if you compare it with the snow, ice and minus temperatures back in Eastern Canada, we are lucky

Although I managed to go out for a short ride and sit on a bench to relax, it wasn't as idyllic as you would believe this scene was 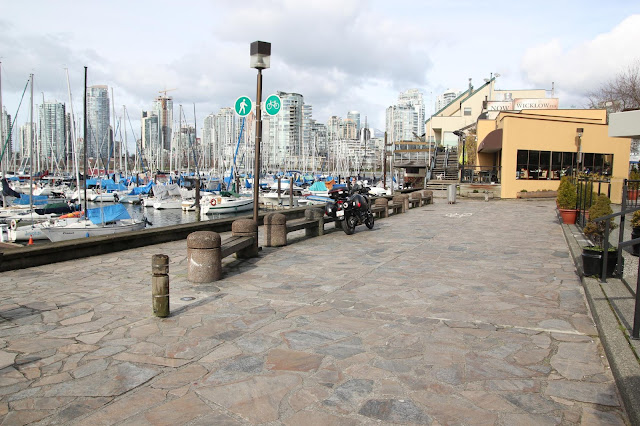 It was peaceful, a little cool but it was nice to just sit and watch the world go by.  There does not seem too many people are walking around today but it was okay with me to spend some time by myself thinking how nice it was being alive and breathing in the fresh air 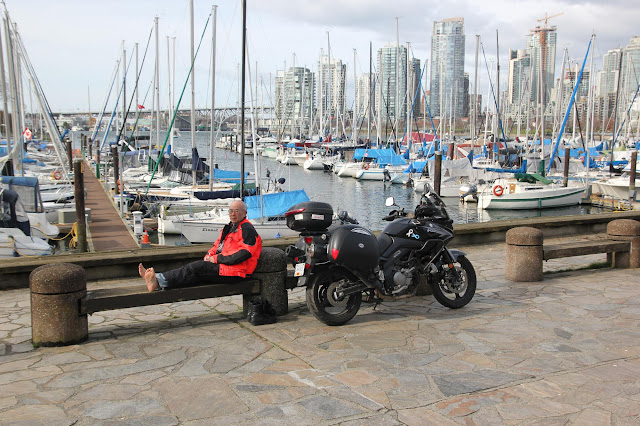 While I am looking completely relaxed it is not easy to release my bike from its hiding place, thus often I just decide that it's not worth the effort to "dig" it out and thus just use my commuter car.  Before our construction project we had a double carport.   Now I have to share our single carport with other construction supplies and tools 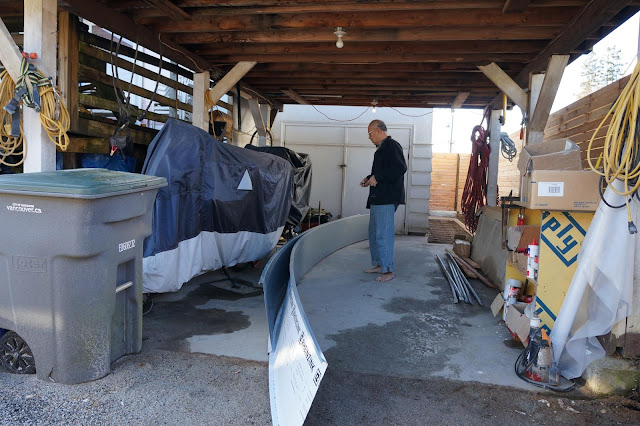 I have to cover my bikes to keep the dust off and a couple of days ago they put those metal pieces there to block my exit.   They were fairly heavy and without gloves I tried to move them out of the way and slit my finger on the sharp edges.  Those are construction tools on the right side 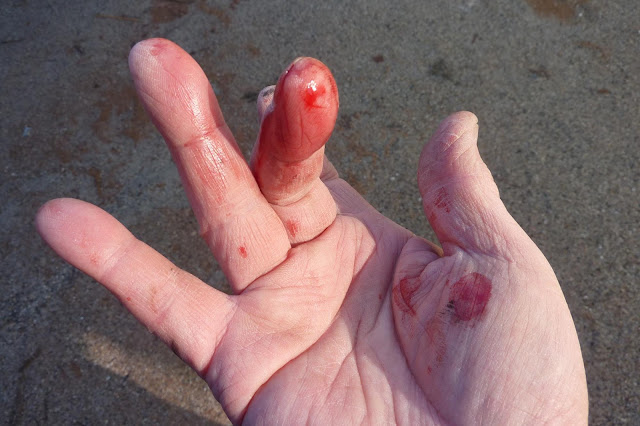 I didn't feel it at the time but I got blood everywhere and I couldn't get it to stop bleeding.   The last couple of times I used my bike I was able to use the narrow driveway and get out to our lane.  But a couple of weeks ago they put scaffolding there 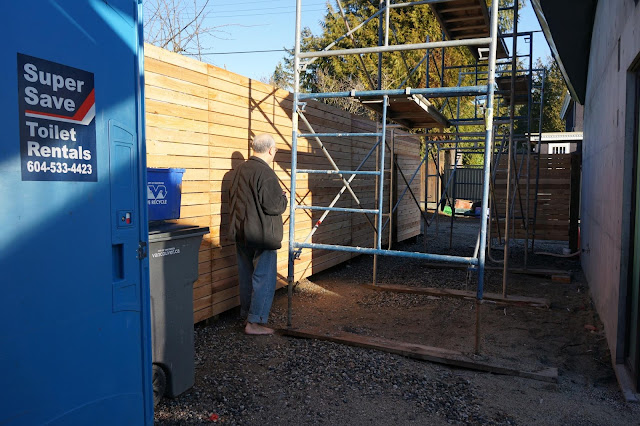 I thought that if the aisleway were wide enough I could squeeze my bike out and try to move that toilet out of the way, so with a tape measure in hand I went to measure the width 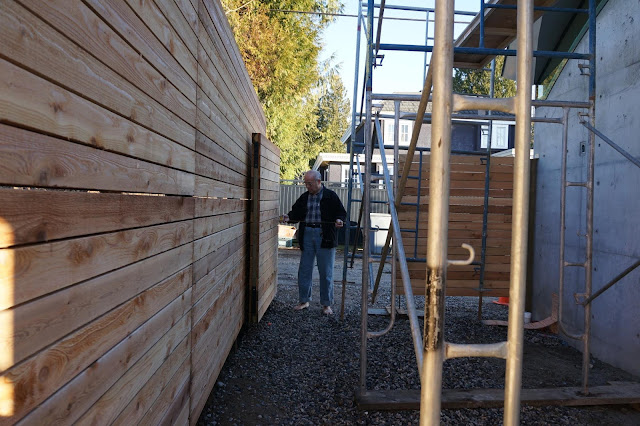 Nope !  it was 4 inches too narrow.   They have to finish something on the roof and I hope they do it soon because when the scaffold is removed, then I will be able to get my bike in and out whenever I want with less difficulty 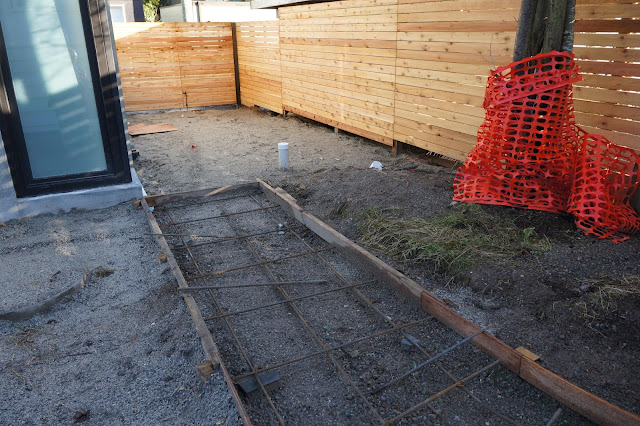 On the other side of the lot, we have another gate but with all that sand and the cement forms, and the top heavy weight of my V-strom I didn't want to attempt it, so now my only option is to use our narrow walkway 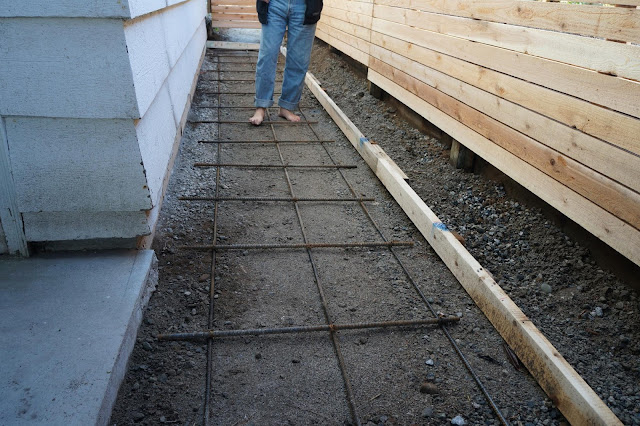 Everything is prepped for the arrival of the cement so there is a rebar grid which I would have to ride over.  They have delayed the cement because it is raining too hard and they are waiting for drier weather which will be another week, as we are forecast to get rain for the next 5 days.  A couple of weeks ago it was dry but with frost in the evenings they said it was too cold

I spent some time surveying my situation so I sat down for a while to ponder my decision.  Imagine: a perfect day for riding . . .  if only I could get my bike out 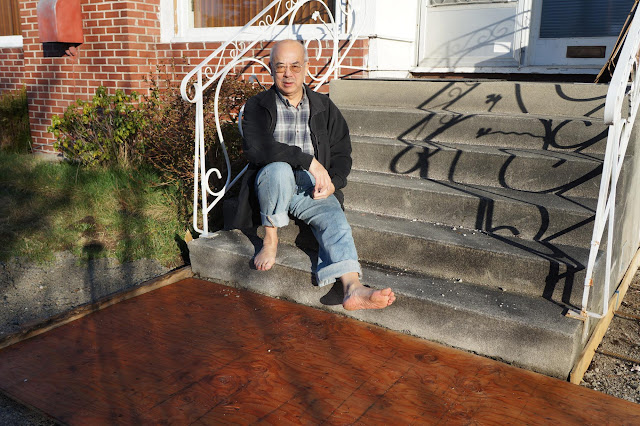 You won't believe that I spent nearly an hour walking around and checking the dirt for leftover nails.  I have picked up quite a few nails and screws as I don't need the anguish of a flat tire.   Eventually I decide to GO FOR IT . . . 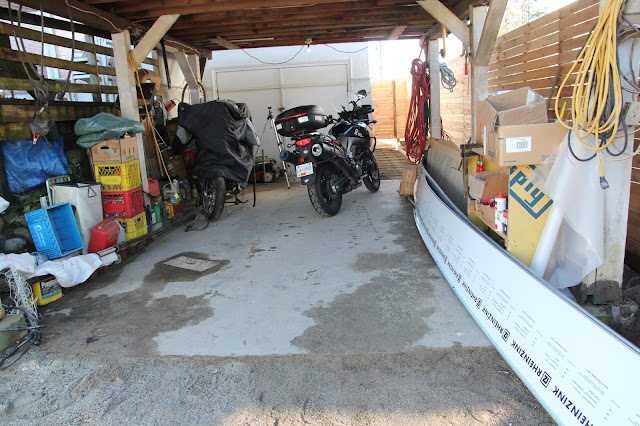 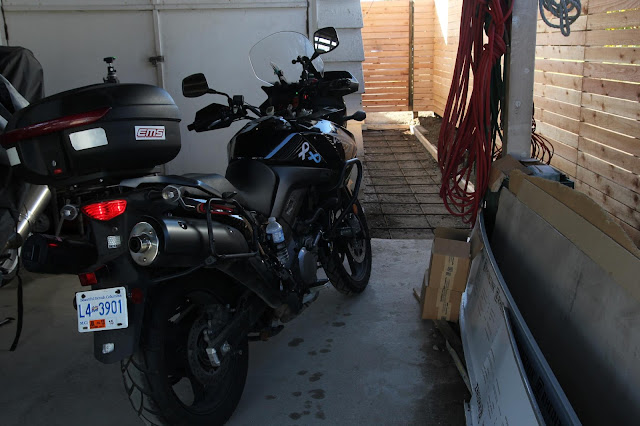 and into exit position and I start the engine to get it warmed up.    I cannot push it over the rebar and then up the incline at the other end.  I need help from the engine . . . 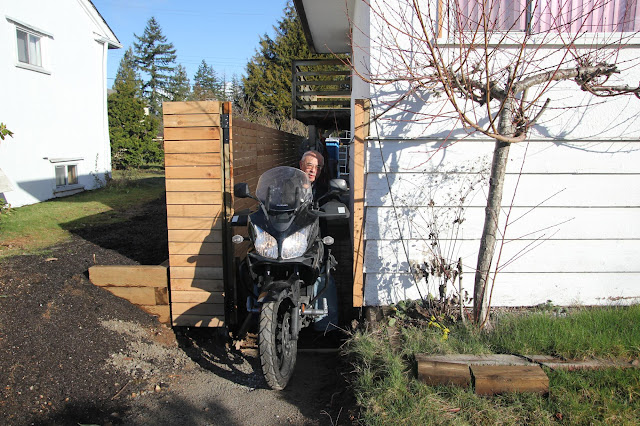 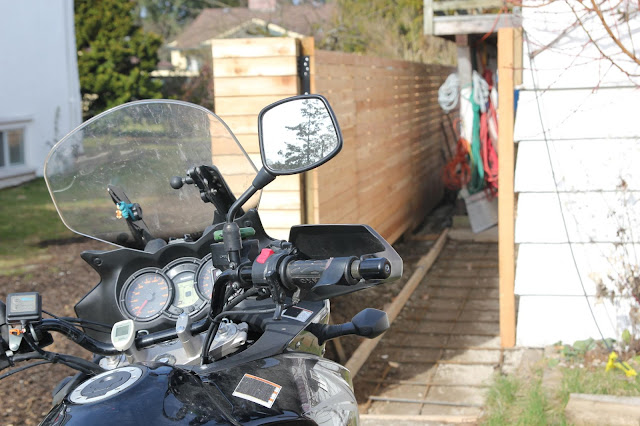 Before they removed my old sidewalk I used to just roll my bike down the cement incline.  Today I had to leave the engine on and ride it over the rebar, and then up the 2" lip at the other end 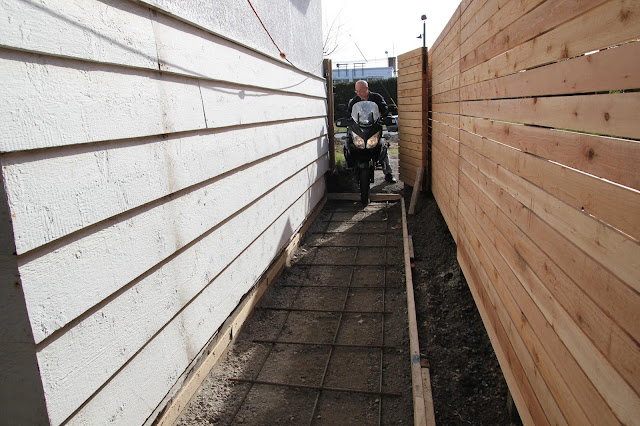 I nearly lost my footing as you have to step between the rebar to get a secure footing, and don't forget that I am feathering my clutch and rolling using engine power 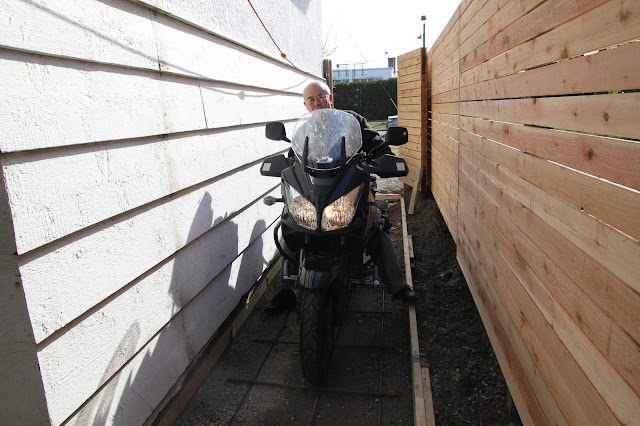 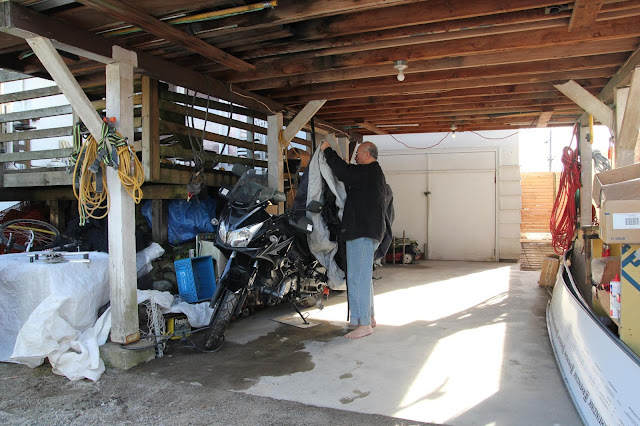 I manage to maneuver to my parking spot, attach my cable locks, battery tender and proceed to install my bike cover 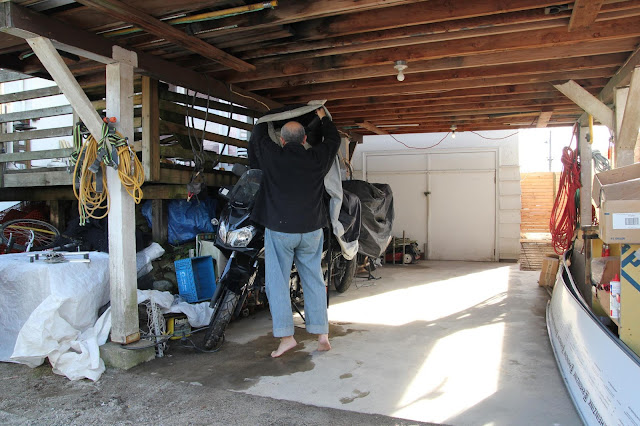 Sometimes it takes a while because you have to make sure you don't get it backwards.  It is hard to find the front 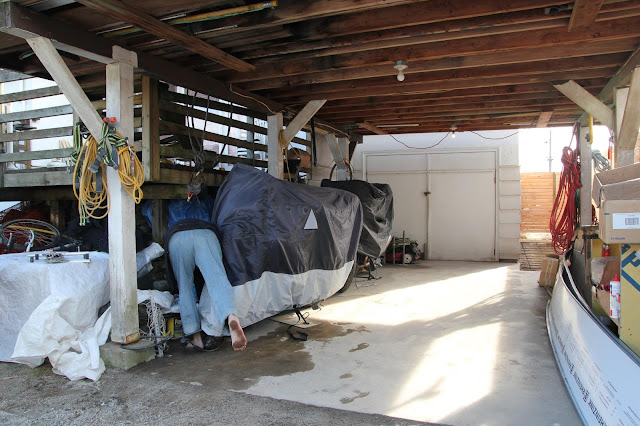 I manage to get the cover on, but I must secure the nylon strap to the ring on the other side.   This keeps the cover from lifting off during windy days 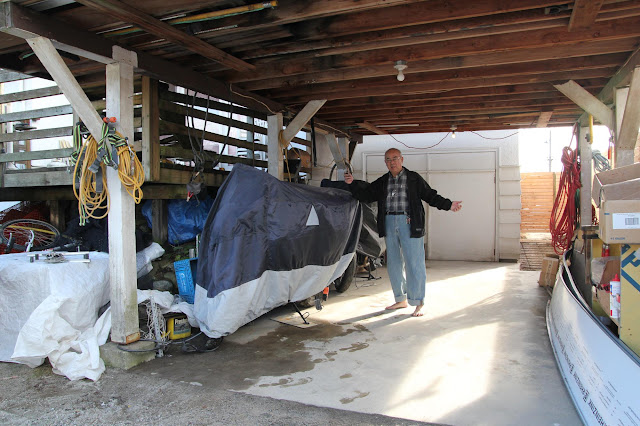 There you have it.  It's a pain in the neck for me to access my bike and lately its just been easier to take the car.   Things will change for the better after the cement is poured or the scaffold is removed