Quite A Sunday - BobScoot In Minnesota

Patiently waiting for my turn with the little wooden scooter, it's now been months since I first started pondering off and on about what, where and how I might share a bit of local adventure with BobScoot.  I have a short list with curled corners and more ideas; timing and prioritizing will be my challenge.  Speaking of challenge, now that the scooter has arrived, I'm feeling a certain weight of responsibility, actually a bit humbling and quite honestly, a surprise to me.  The very kind and much unexpected personal delivery by a white Vstar, ridden from across more than a few borders by VSL has made it all the more so.

Like Matt before me, I absolutely envisioned coming home from work one day, bouncing up the driveway, still dusty from the UPS truck there only minutes ahead of me which is often the case.  Even just hearing that the scooter was being delivered by one of our own changed everything, a change for the very much better but the scooter's arrival only happened after a crescendo of news.

First there was an email giving me Publish rights on Riding the Wet Coast, expected eventually but now it meant that I was finally getting close.  I then quickly learned that the scooter was on its way, how and when at that point still a surprise.  The weekend after the July 4 weekend an email arrived, "Coop, I'm almost on the way, going to hand deliver the scooter."

It was at that point that my receivership took on an entirely different level of anticipation.  Naturally I began to make plans....thinking of the possibilities of places and rides to share...."irrational exuberance" I think someone called it.  An email, then texts.....Ohio, Indiana....the river and finally Dubuque.  Now that it and she were in my 'hood, timing was beginning to matter.  Having been down there for the Iowa Guzzi Rally only days before, I offered a few suggestions of roads and places to try, river roads, highlighting the fact that at least over the stretches I knew, no road construction had been encountered, a rarity around here this summer.

Winona is an hour away, but only if one stays on our side of the river.  Winona/Cheese Factory meant a river crossing over one of two spans across the Mississippi and then back again.  That meant, allowing some time, maybe a couple of hours, three tops.

Over the Iowa Guzzi Rally weekend, we were deluged once again with another 2-3" rainfall, the third one in as many weeks.  That meant that for the 3rd time in those same weeks our farm's Dry Ditch was anything but, each rainfall left a quick 12" of rushing water over our driveway from the valley upstream.  No real damage to the driveway, at least none if you dismiss the 5-6" of muddy silt that gets deposited each time.  That Sunday afternoon on the way home from the Iowa Rally, the loaded ST2 and I alllllmost went down in the mud, 500 ft. from the home garage.  A couple of days later, once dry, went down and again, for the 3rd time, did my best with the old 9N to scrape the pudding-like dirt away and off from the solid gravel beneath.

I texted Karen her final landing coordinates, thought about the still greasy driveway muck and though not deep, it still remained a potential hazard for Canadian VStars (USA ST2's as well).  A windy and sunny day, I took the van down and made 20 ditch crossings to expose and 'roughen' up the surface, confident that by the time our visitor arrived, all would be well, at least hard and dry well.

"..gravel road, .5 mile, driveway somewhat hidden, steep and should be dry by the time you arrive :)"

The next correspondence received, relayed the fact that lodging had been secured in Red Wing (no gravel there) and after a long, hot day, the thought of a half mile of gravel and THEN a steep, possibly wet driveway was just a bit more than our visitor was prepared for.  POV is everything and from mine, the driveway was not an issue.  I completely understand that from Karen's, navigating that last single kilometer was something to prudently avoid.

The Red Wing Pottery Museum is across the parking lot from the motel. 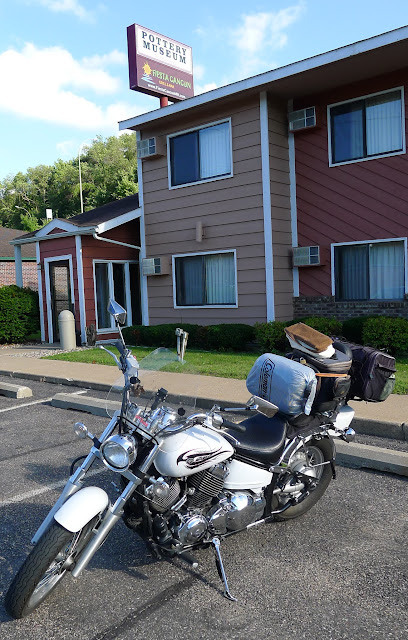 From that point on, Karen's Post, the cartoon bubbles and L.S. covered the evening better than I can.  I wasn't at all surprised to see our traveling friend standing next to a shiny, properly clean Yamaha, camera and selfie stick in hand.  After dinner we made a trip up the hill to Memorial Park, the lookout over downtown Red Wing, the setting sun making for challenging photos but Karen snagged a good one in spite of conditions. 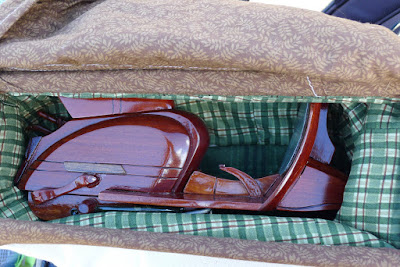 Much better than a big brown truck and a brown uniform.... 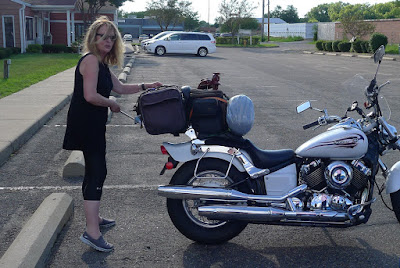 An amazing day, anticipation, a lovely evening and a chance for the 3 of us to relax, dine and enjoy.

The MN chapter has begun.
Posted by Coop a.k.a. Coopdway at 6:43 PM