Another lovely summer day, on the warm side but isn't that what we upper Mid-westerners are waiting for every January?  A slight breeze and humidity that had backed off, it was a glorious day for riding.

Yamaha Day, the label in my head, the machines that we rode....Ben had the old reliable XS650 and I had the black streamliner.  My GIVI humpbag, an almost easy fit for SB in the pouch.  Both zippers didn't really need to be absolutely closed on such a nice day.

The worst part of our infamous driveway......it needs to be graded once more and before we get more gully washers. 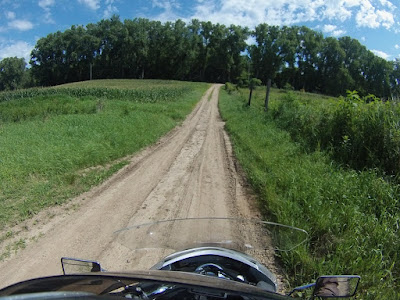 We just got going out on the highway when one of our local yahoo's passed us.  Never in pants, never helmeted, often shirtless.....on a Sportbike, I don't know how he does it.  I did secretly enjoy seeing his jowls flutter in the wind (old enough to know better) as he pulled back in. 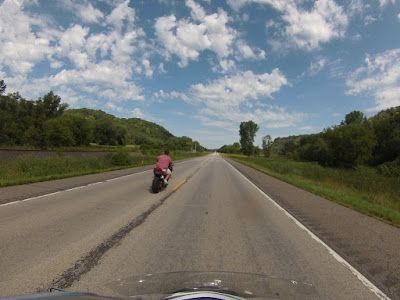 In to Red Wing for some petrol.... 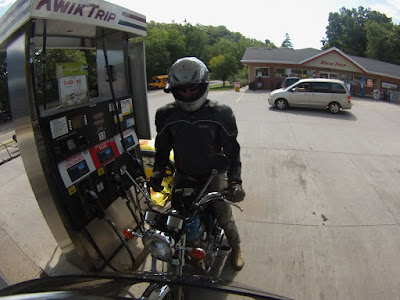 Waiting for the BNSF train to pass at Cty K and Wisconsin 35.  This must have either been some sort of Inspector or a VERY dedicated Railfan. 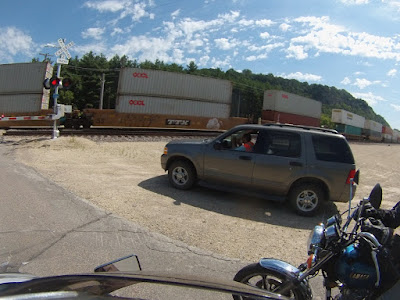 Yesterday's ride start was a late one so we hadn't ridden very far before it was time to get some lunch.  Taco Tuesday was my choice, Ben went with the Bacon Cheese Burger. 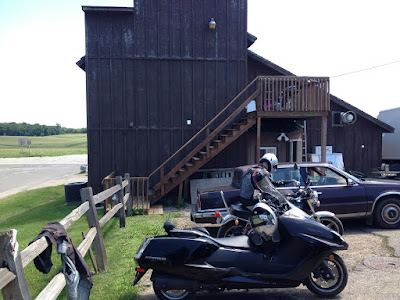 We've driven and ridden past this place at the crossroads of Cty N and US 63 literally hundreds of times and never stopped.  I made a different choice yesterday. 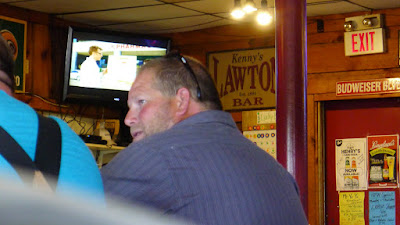 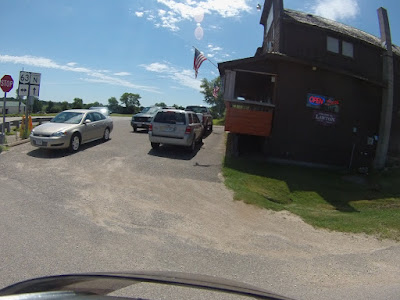 We were on our way to Spring Valley, a place that we once rode to often, the we being my parents, Peg....a long time ago.  Spring Valley, tucked low between the hills suffered greatly from flooding so the Corps of Engineers built this earthen dam barely above the town and in so doing, created a public lake and recreation area.

We chose the Overlook Road..... 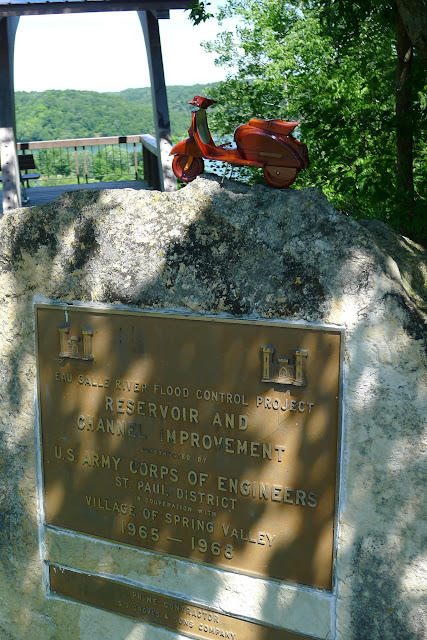 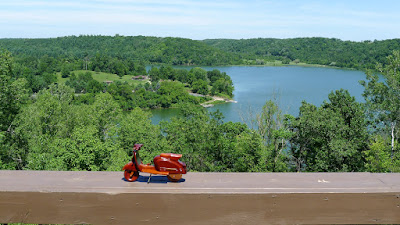 Here's the cut through the rock, source of most of the earthen dam material. 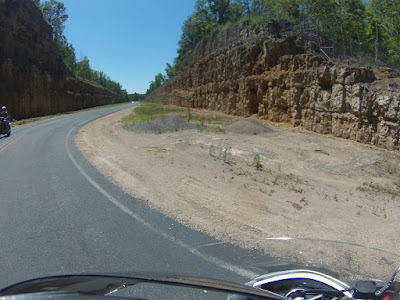 This from Spring Valley's Athletic Field, just below the earthen dam. 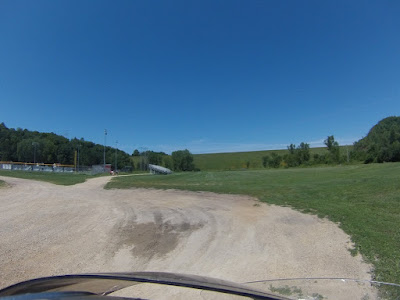 On Cty Q passing beneath I-94 just west of Knapp, WI. 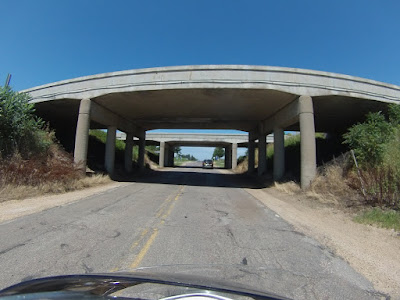 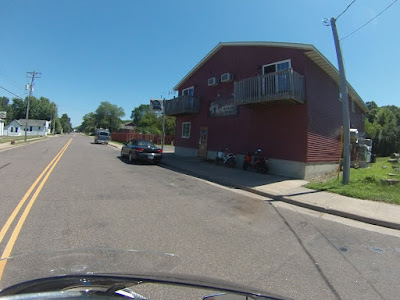 Stopping for some water on the steep and curvy Cheney Hill Rd heading south out of Knapp. 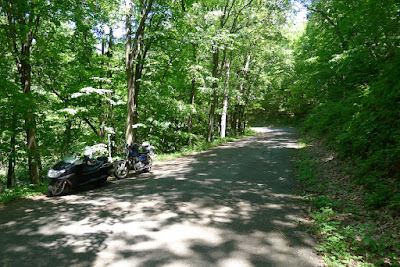 Typical backroad......It dawned on me here, this route was one very close to the one I'd ridden with Rick a few weeks ago.  Such a pleasant, close to home, reasonable length loop with all of the things present on a ride that I enjoy.  This will be a Track and Route that I use again. 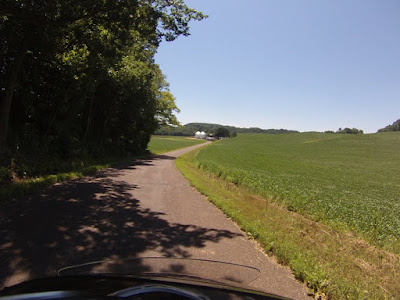 Lots of heavy traffic yesterday.  This must have been the 4th or 5th vehicle we'd met on the Named Roads since leaving home. 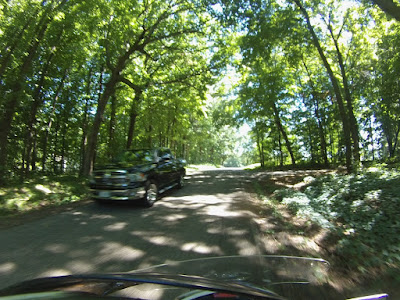 I slowed way down to get a better look at this big Gleaner harvesting what I'm quite sure was flax, not a common crop grown around here. 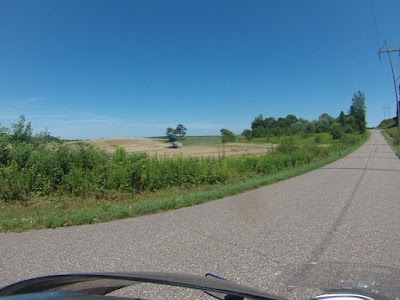 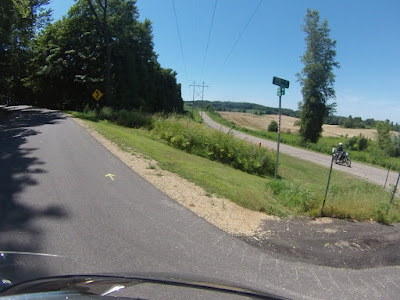 On to Menomonie and a Rustic Road.  We absolutely had to expose SB to one of Wisconsin's treasures, their Rustic Road Program.  Of the 117 current on the State's list, I've done just a couple less than 50.  There were just over 100 when I sought out the ones in the western half of the state.  I'm most deficient in riding the SE and NE corner routes.  Numbered in the order of creation, we stopped for and rode #89 along the Red Cedar River. 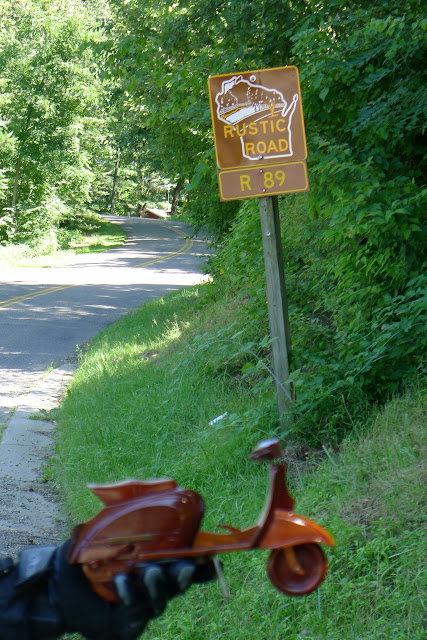 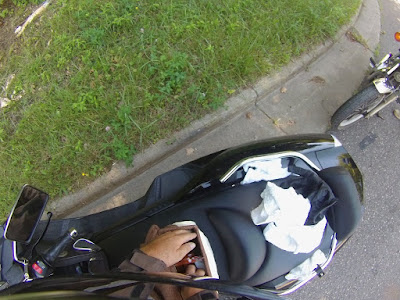 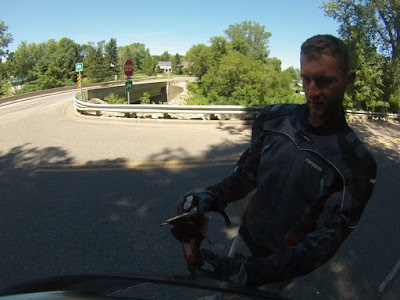 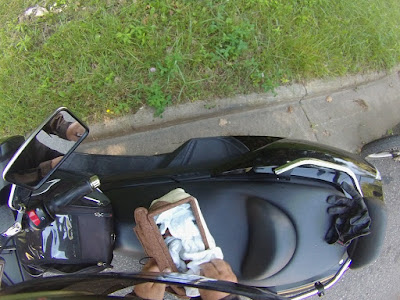 Down through Downsville and into Durand for some fuel and more water.  From there, primarily a route on Cty Z (should ride this more often) and then the old standby Cty S into Plum City.  Here an absolutely mandatory stop at the fish pond and park. 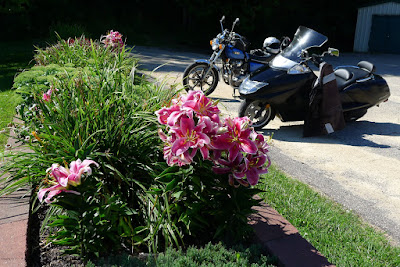 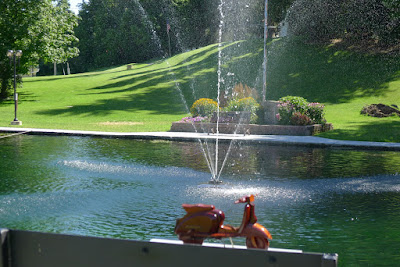 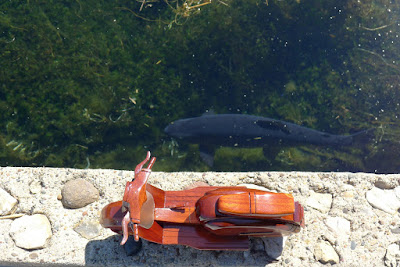 Our last stop of the day (what did you expect??), ice cream at Flat Pennies.  In Bay City, Wisconsin, literally across the river from us is a store featuring treats of all kinds, the motif a Soo Line Railroad caboose, the BNSF tracks across the highway mere feet away. 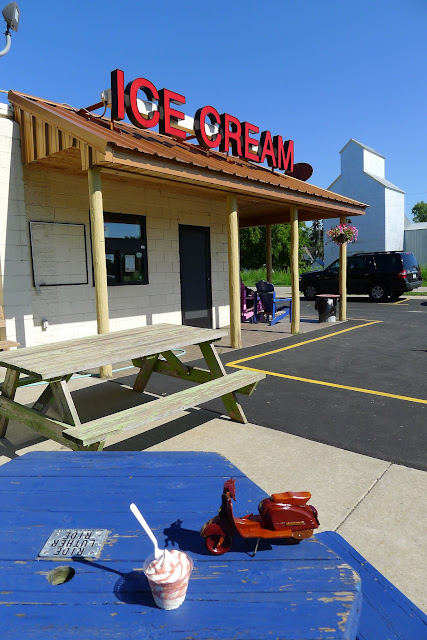 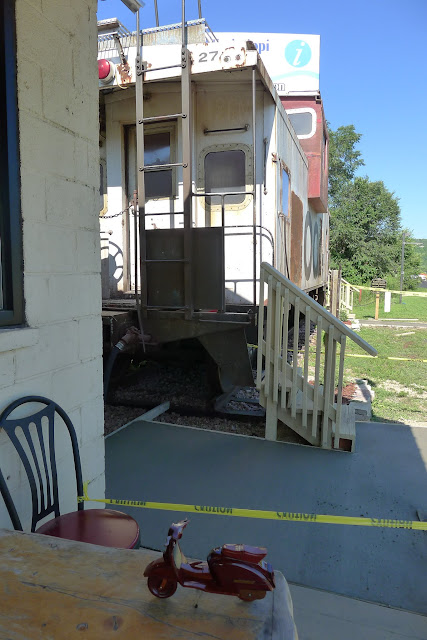 165 miles of absolutely perfect weather, roads and most importantly, riding.  We had a wonderful, unplanned and lazy day. 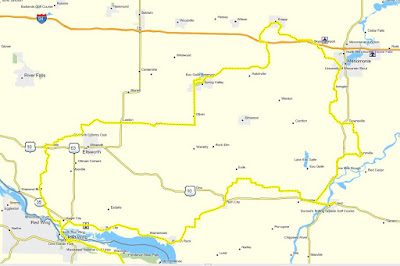