In 1969, I was almost fifteen and open to influences from all sides.

I'd already owned a motorcycle, been riding for a couple of years and the dream (and boy could I) rides taking place in my head involved narrow, rocky and steep mountain trails, my ride of choice a Honda Trail bike, running down a gear or two.  We had a brochure that my brother and I literally wore thin the few years previous.  Our riding experience was in wet hay fields (deep slippery alfalfa isn't as soft as one might expect), cow pie filled pastures, rocky fence lines with sacks of feed on luggage racks.  Public gravel roads happened (more and more frequently) as did narrow creek crossings but those carefully chosen and in only just the right places.  Mistakes were made, some bumps and scratches happened.  Ride loops were getting more extensive and the love of maps that Gramp had shared with me was really taking hold.

Then a TV series came along when my world was really beginning to grow, the timing couldn't have been better as far as I was concerned, both at the time and I still feel that way to this day.  Maps weren't just townships or counties any longer; state maps were being collected and studied.  The 3rd motorcycle I owned, my name the only one on the Registration Title was one not much different than this one only mine was blue.

I rode mine south along the shores of the Mississippi, both sides, as far as southern Arkansas, never quite making Texas which had been my map-reading goal.  Still, it was a river trip I wanted and one that sufficed.  The '70 never saw salty beach water, climbed any steep western hills and to the best of my knowledge, wasn't airborne even once.....we did just fine regardless.  After a couple of years, both dad and I were ready for a bike change so he and I swapped.

He had the HD and I had an almost new Honda CB750, very much kitted for Touring.

Touring was most definitely what I had in mind.  And so, a partial explanation of some if not most of the Issues I currently have.

SB, thanks for sharing the road with one of my old ones and for bringing back many of those old memories. 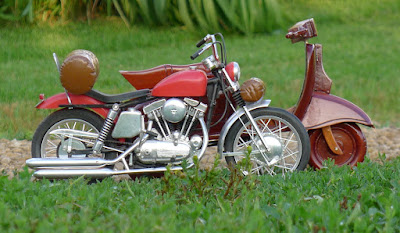