Today was the day that I had to leave my fast free internet and start heading home.   It was a later start than usual as Dom suggested that I leave after the morning Denver rush.  And it also gave him time to prepare a simple egg and toast breakfast so I wouldn't leave hungry.  I forgot to take a couple of bananas for later. 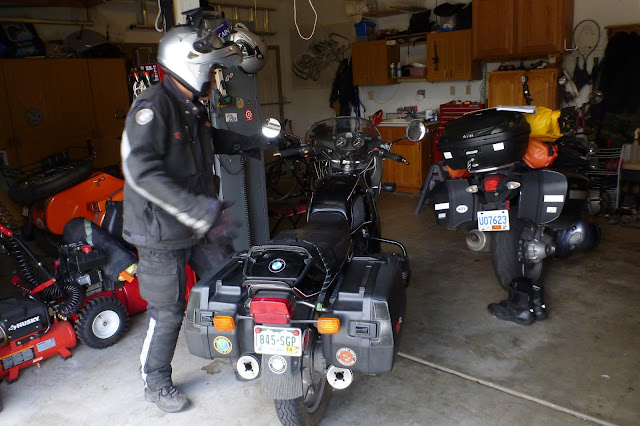 Here he is getting his Airhead, Brigitta ready 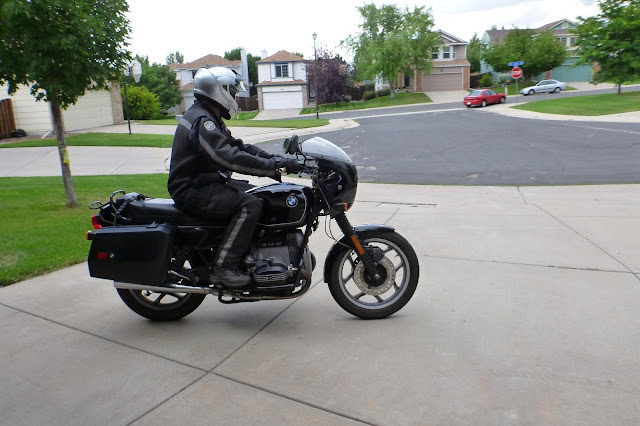 I noticed that he is not used to balancing on 2 wheels as he has been mostly Hacking for the past few years but soon enough he points out the entrance to the interstate and we wave our goodbyes.   I am saddened that I couldn't have stayed a few more days but I have to get back to work.   They are such great hosts and have gone out of their way to make me comfortable and make me feel at home

I was only wearing a T-shirt under my riding jacket and Dom told me it may be cold on the mountain. I also had the mesh panels removed from my Tourmaster Flex pants so I was really chilly.  The temperature dropped to 13c and I was freezing.  The cold air went right through my mesh pants and I only had shorts under.  I pulled over at Georgetown and put on my yellow jacket and then turned on my heated grips, but my legs were freezing.   Finally at the summit there is the Eisenhower Tunnel which goes through the top portion of the mountain and when we came out the other side it started to Hail.    I was worried that the ground would be covered and my slick road tires would not have any traction.   The downhill section is really steep and goes for miles.  I teeth were chattering . . .

It was too dangerous to snap left hand photos but I took video which I cannot process until I get home.  Eventually we get back to the bottom and go through beautiful Glenwood Canyon 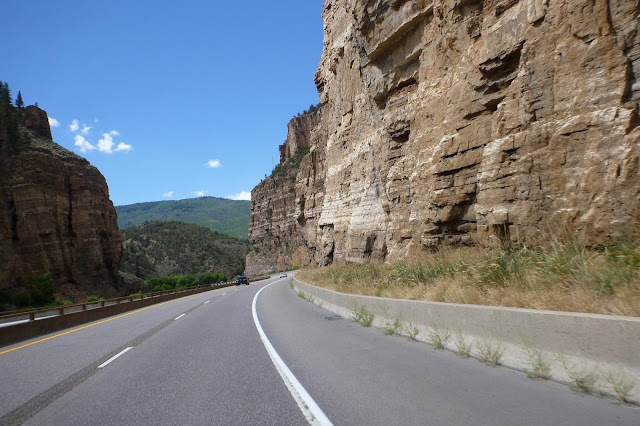 I was reluctant to snap many more as it's hard to concentrate and try to negotiate the curves, at speed, using only my right arm

By this time the temperatures had soared to 34c and it was boiling so I had to stop to remove my jacket, open my vents and go somewhere for a snack with Air Conditioning to cool down 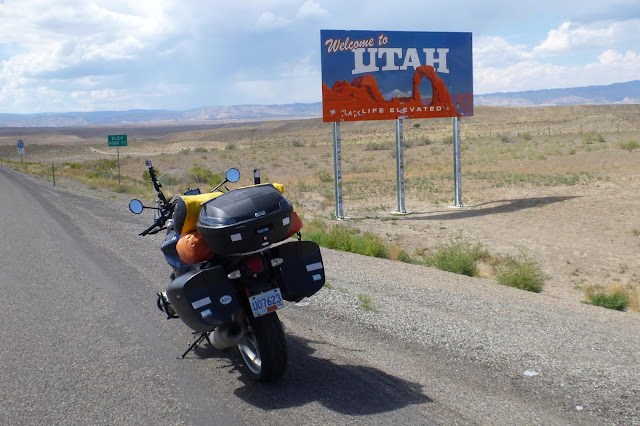 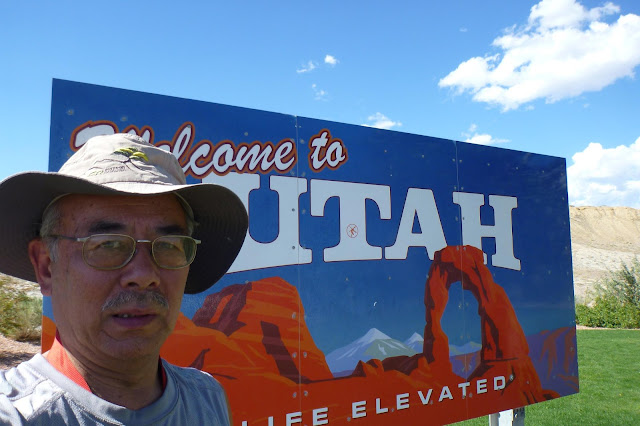 Even though Dom mentioned about bringing some water, I forgot, so I had to stop at the rest stop and use the vending machine 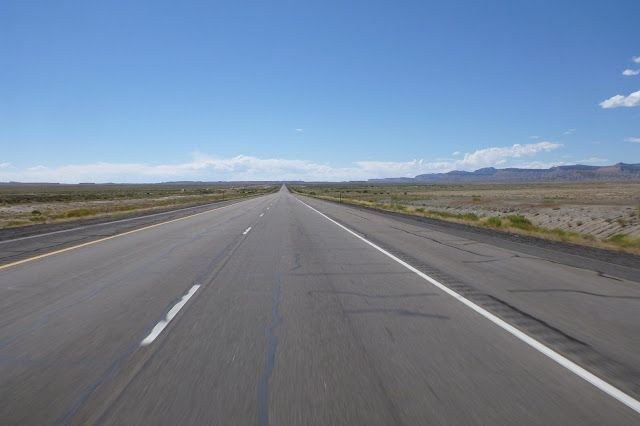 The first part of Utah is straight and flat and gas can be a challenge on the stretch before Salina.   Dom never mentioned anything about lack of fuel

I usually start looking for a gas station around 250/300 kms (180 miles) so I keep an eye on my trip meter and when I saw the last gas station pass by my trip meter was only around 150 kms so no need to worry.  That's what I thought until miles later when there was a hand written sign that said "no services next 100 miles".   By then my trip meter was around 188 kms.  So what to do ?   Turn around or keep going ?  I knew it was going to be close so I kept on riding

Now I was in fuel saving mode.  I made sure I was in 6th gear and reduced my speed to 60-65 mph, even though the speed limit was 75 mph most of the way.   It really hurt to let all those big trucks pass and disappear on the horizon.

I am not sure how much my tank holds but the specs say 17 ltrs.   I filled up with 15.5 ltrs.  My intention was to ride another 60 miles to Fallon but the setup here was perfect.  There were two hotels and a few restaurants and lots of trucks parked in the lot.  So I grabbed a room at the Motel6 and walked across the lot to the restaurant. 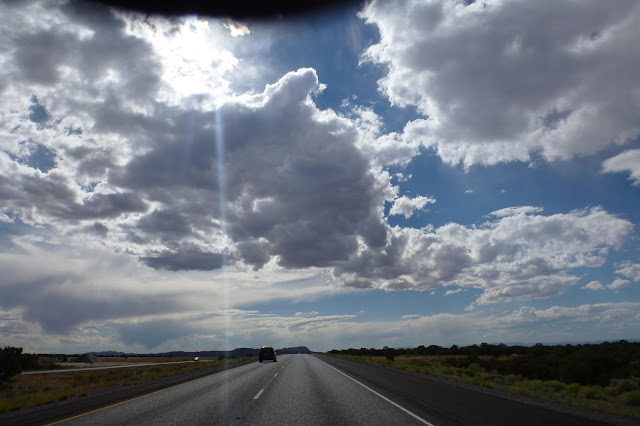 I was surrounded by dark clouds all day and I could see rain on the horizon.  I thought for sure it was going to pour, but I was lucky and nothing happened.  When I arrived in Salina the sun was beating down and it was hot, not good for camping so here I am in air conditioned splendour with reasonable WiFi

Last year during our iMBC2012 in Joseph, Oregon we had a non-riding day sitting outside on the grass and Troubador and Trobairitz brought out their Alite Monarch folding chairs.  I liked it so much that I bought one at the REI in Bend Oregon on my way home.  There it sat unused to I decided to bring it along with me on THIS TRIP.   When we were in State College PA during July I brought it out and tried to sit on it.  That's when it collapsed and split the tube so it was broken.    I have been carrying it with me all this time and have not come across an REI to see if they would do something about it.

Today Dom checked and there was an REI in Grand Junction, CO so I set my GPS and brought it inside.  I asked to speak to a supervisor and was referred to John.    I explained that I am from Canada and bought this from REI in Bend, Oregon.  To make things difficult I do not have a member number, even though I am on REI's email list and I do not have my receipt.  He hummed and hawwed and said that without a receipt or member number it was "difficult".   I talked some more and just asked for him to be reasonable or offer me a discount on a new chair.   He told me that he only had the REI version of the 4 legged chair that David had.  He told me to go over there, and grab one.    So I did . . .  and he gave me full credit for my defective chair and I bought the newer one with the 4 legs. 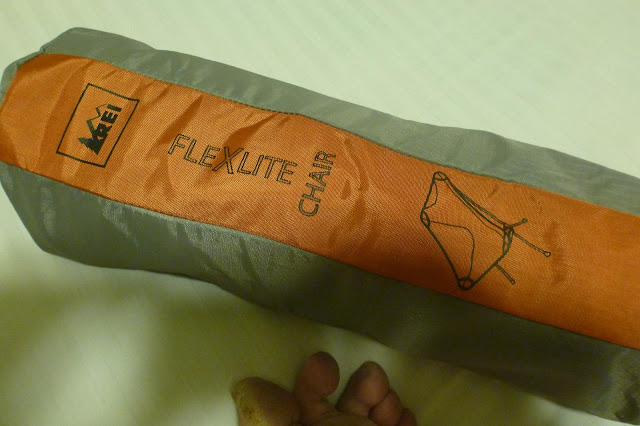 Here it is,  the REI branded FlexLite Chair.   Now I won't have any problems the next time as you can only buy them at REI.   Anyway,  thank you  REI for your good customer service, and a special thanks to John at the Grand Junction, CO store on North Street