Last fall I was following the adventures of Kedgi and when I was planning my Atlantic trip I had the desire to meet him so he invited me to visit them when I reached Shediac and he promised to feed me home made lobster rolls made by his partner, Angele.    You can read about his adventure to South America HERE

We had been exchanging emails and he had the bright idea to meet me "on the road" somewhere in PA as he had just purchased a new KTM and was anxious to put on some miles so I also started a RR: Ride Report which you can read here.   His plan was to ride around Lake Superior and be back home in Shediac before I arrived but he was delayed with bike troubles which he posted here..  We missed each other by about an hour as he was heading West on I-80 the same night I arrived at State College, PA

We left our campsite early Monday morning to the sounds of the dreaded rain and packed our tents WET
and headed over the Confederation Bridge in gusting winds which made riding challenging.  I had to slow down and I thought it would help to be in a lower gear 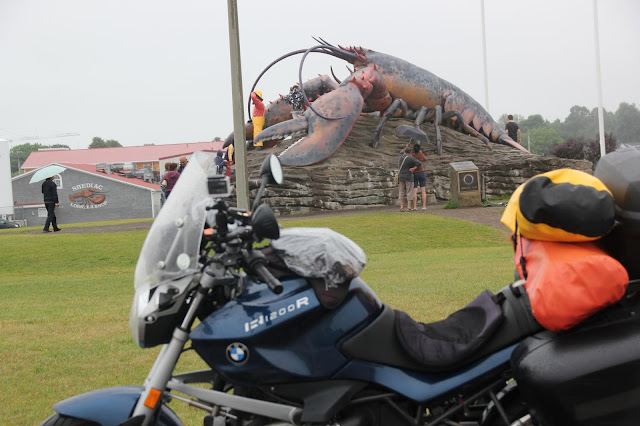 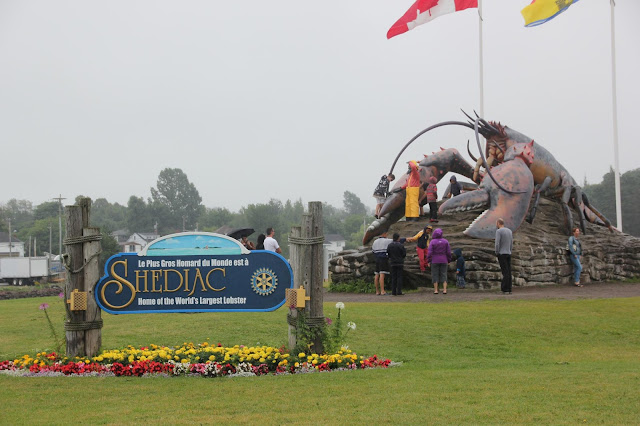 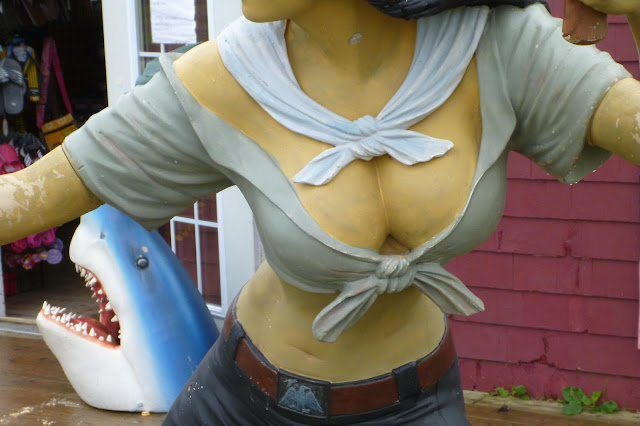 and snapped a few more of the Lobster

and finally we decided to leave and as we headed back to our bikes, a shiney, new KTM appeared and parked next to us 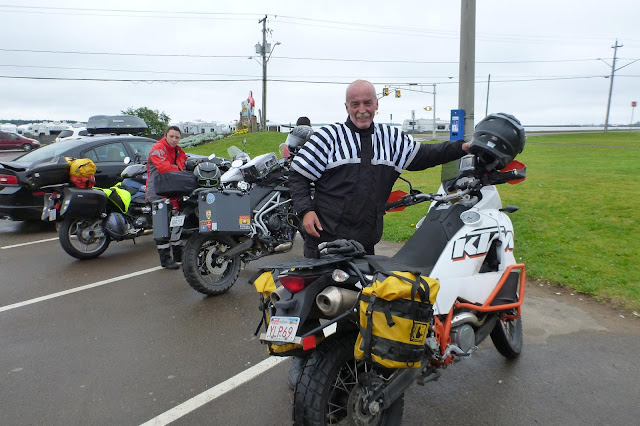 it was Dwight.  He was following our spot tracker and knew where we were so he headed over to meet us 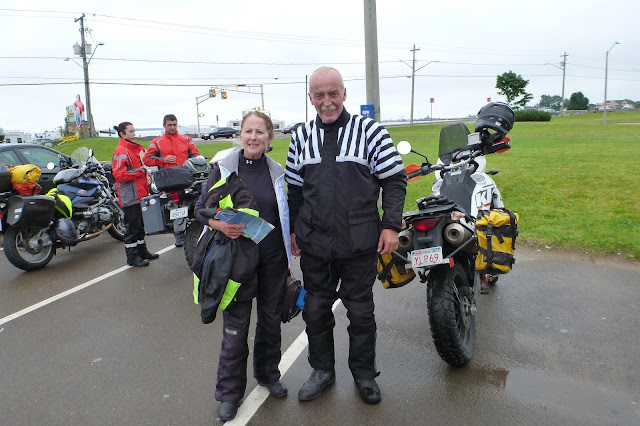 we took a few photos of each other 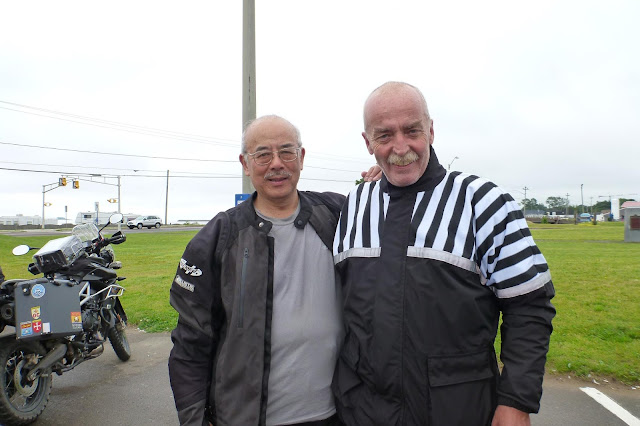 and then he led us "home" for the evening 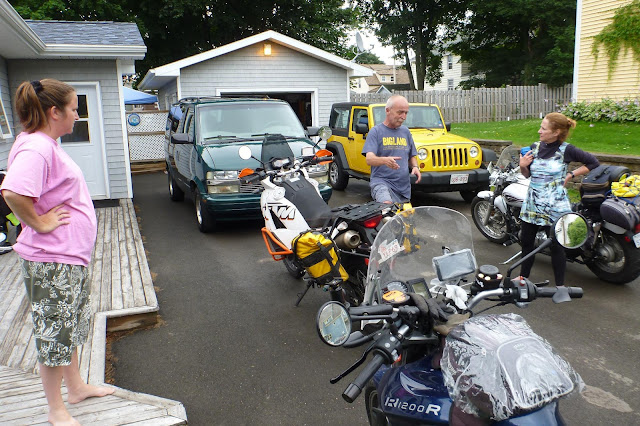 we unloaded our bikes and stored our stuff in his garage 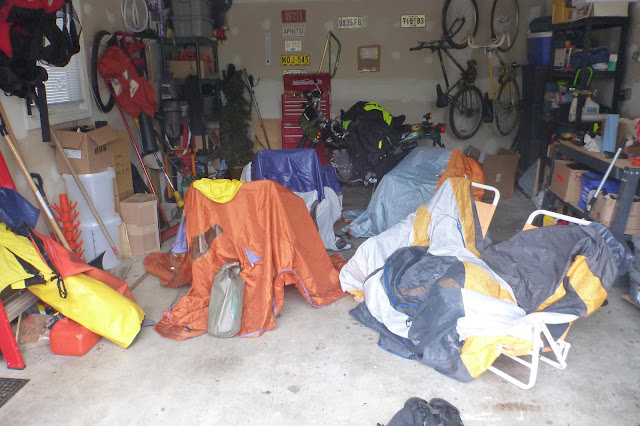 he also set up some chairs so we could drape and dry out our tents.  Notice the new Super Sherpa in the background.   Dwight made us feel so welcomed.  He invited a few friends over to meet us and put on the BBQ for hamburgers, hotdogs and Lobster rolls 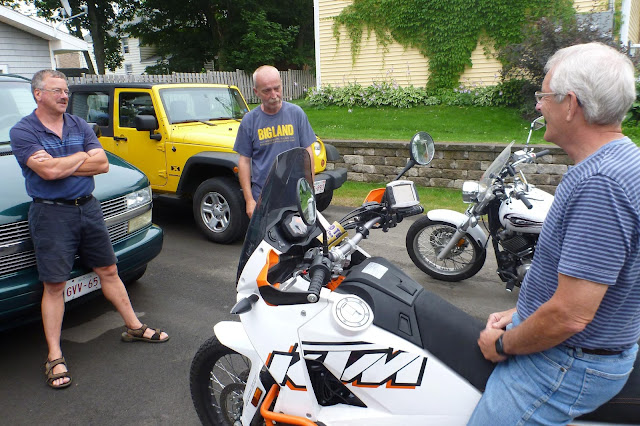 sorry, only photos of the most delicious lobster rolls made by Angele 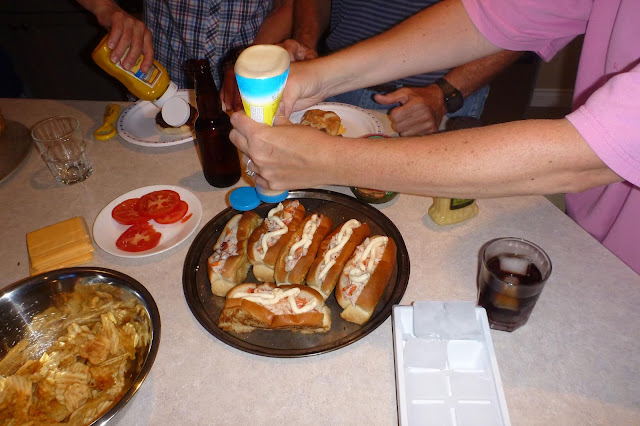 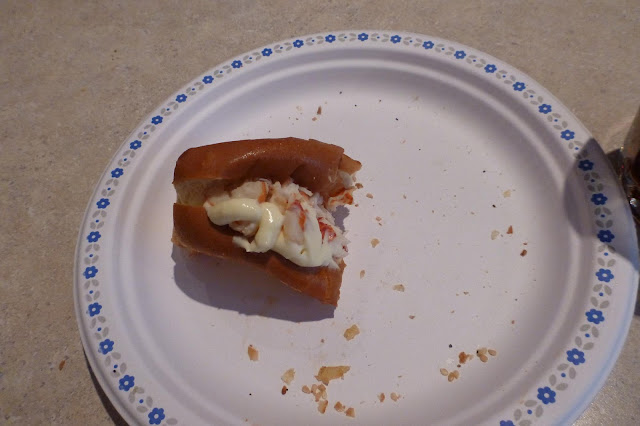 It was really, really good.  This morning it was time to pack up our things and head out, but not before a healthy breakfast prepared by Angele.  MMMmm,  ham & eggs, toast, coffee and yoghurt 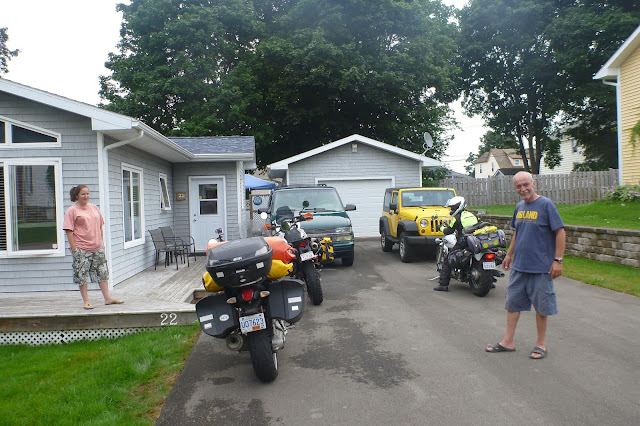 and Dwight helps out with route planning as we head West 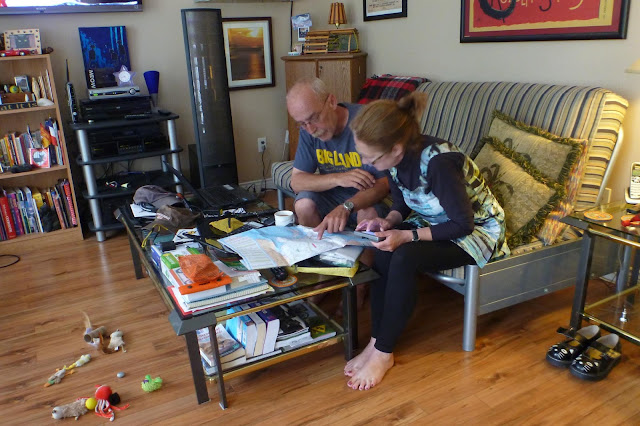 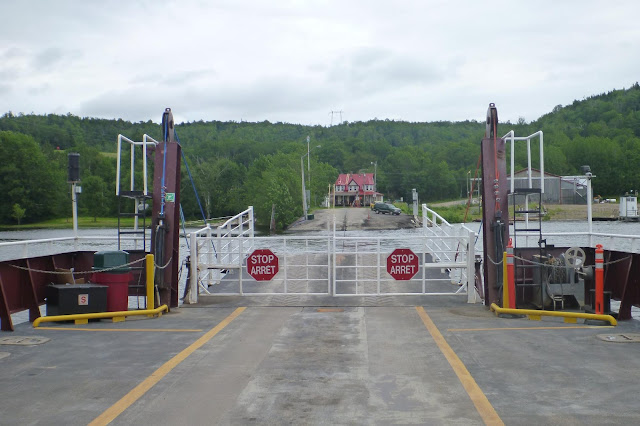 we arrived at the end of the road as the cars we just rolling on so we rolled on too and before you could even put your kick stand down, we were already floating away from the dock 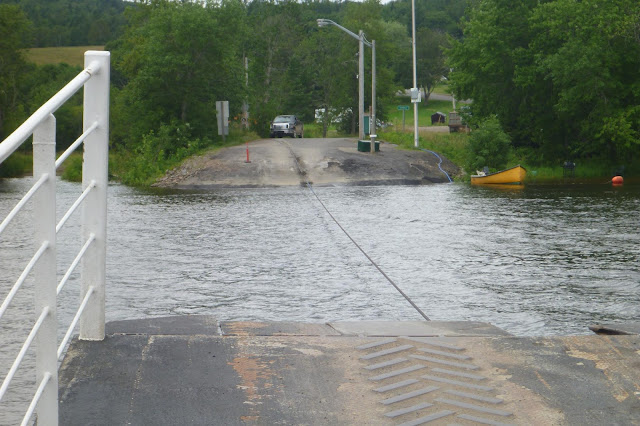 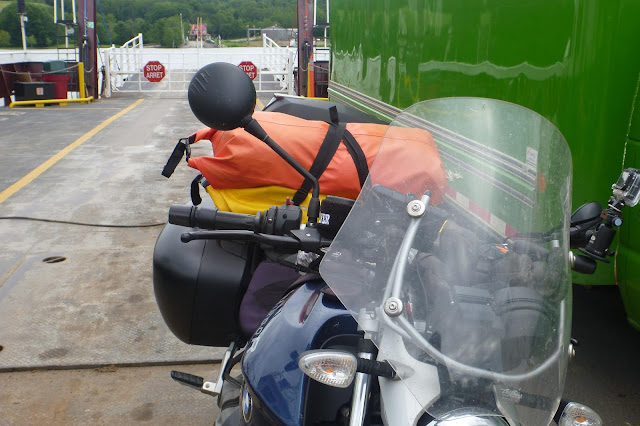 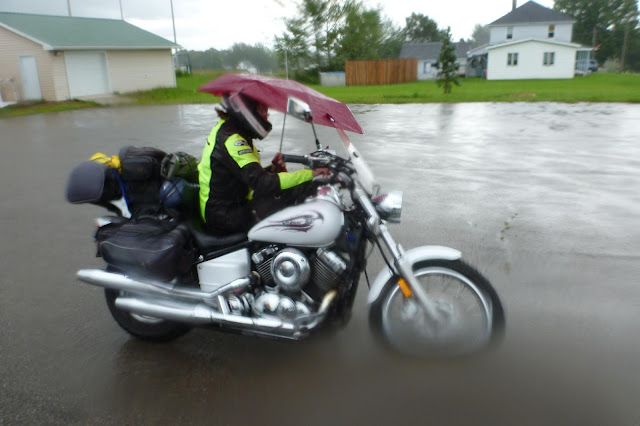 and I dig out my rain jacket. 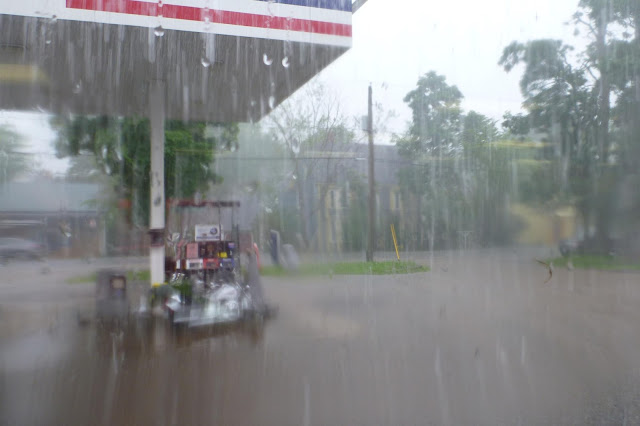 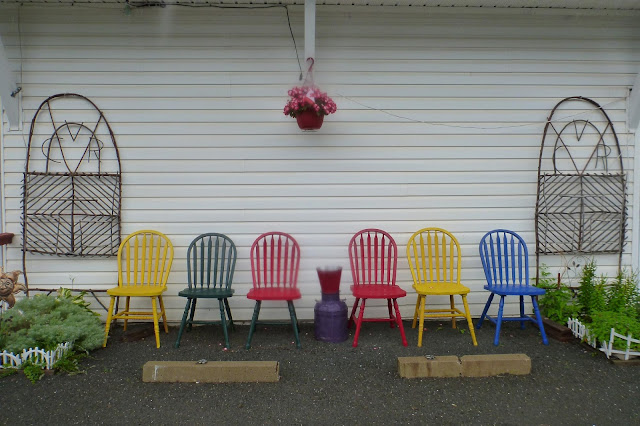 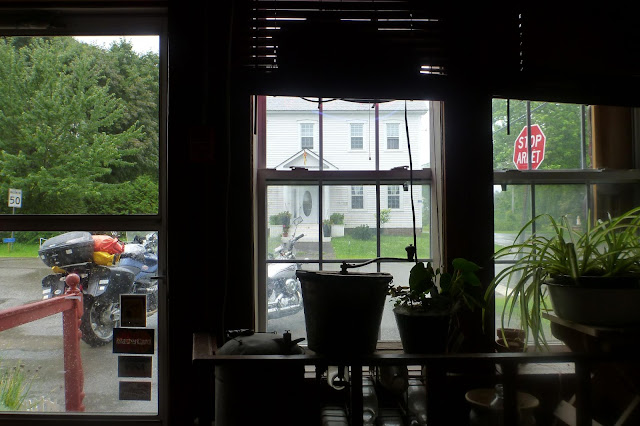 and we are hoping that the rain will be less violent when we finish our meal..  As we continue Westward the skies clear and it becomes hot and humid 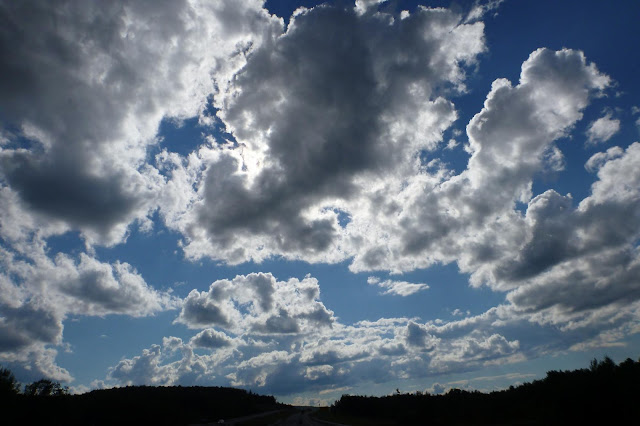 and tonight we are in Woodstock, NB