Firstly, thank you for all your comments.  I read them all but I am getting behind in my replies.  For some reason campsites do not have electrical outlets and I have to use a plug somewhere else.  Like tonight I am sitting outside of the washroom on a hard wooden bench which is giving me a bum ache because of the wrong typing angle.  Plus I am typing in the dark on a small laptop and missing the keys a lot

I am not used to Solo Traveling, whether by Plane or by Motorcycle.  I tend not to eat or stop so on a hot day I just keep riding.  Then because of this heat I can't seem to eat, I don't feel hungry.  I buy a meal and have to force myself to eat it

I got an early start this morning, packed up and left the campsite early.  I decided not to fiddle with my MSR Whisperlite stove as my plan was to go somewhere for a good breakfast to start my day right 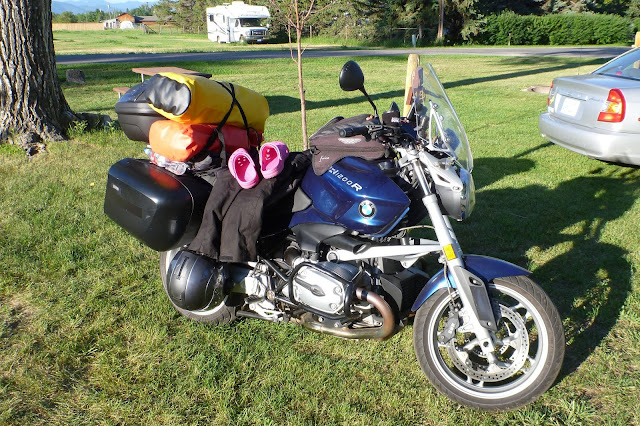 As I was looking for a place to eat in Downtown Bozeman I continued down the main drag, I think and then I stopped behind another bike which looked familiar.  He was from the same campsite . He was riding to the Valkyrie rally in WI.  Long story short we ended up on the Interstate.   I managed to find a meal a few miles down the road.   Eventually I made it to exit 408 and then headed south to Red Lodge where I found the start of the Beartooth Highway 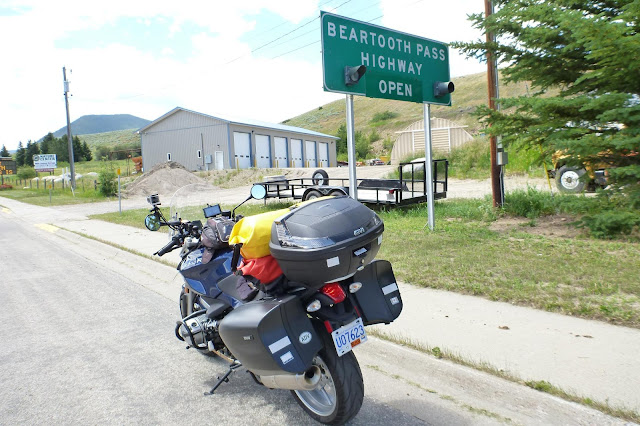 ,
I am not sure I have ever been on a road with so many switchbacks, no shoulders and no where to pull out for photos and one-handed photo taking is not that safe, but I managed a few anyway 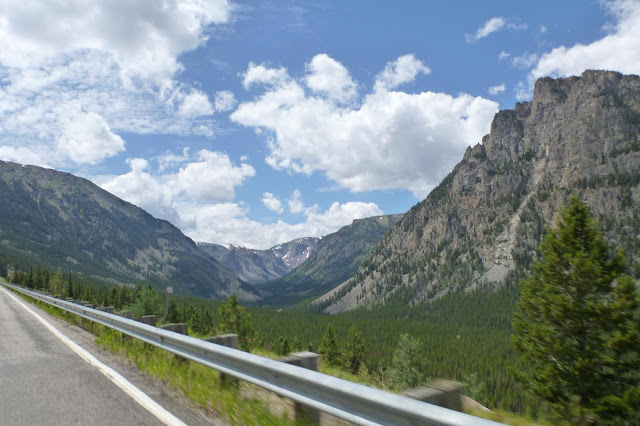 There were many bikes out today 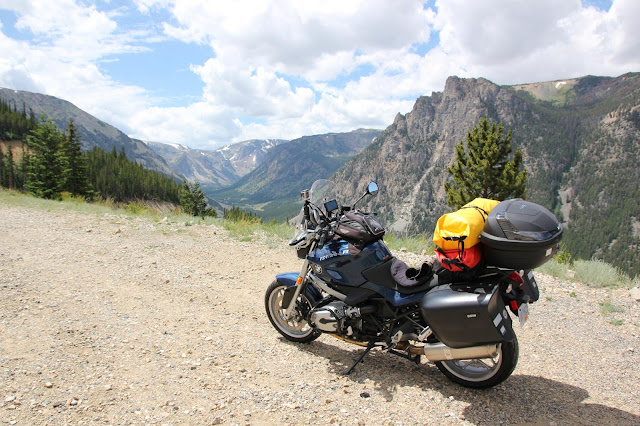 My bike was leaned over on the last switchback into this gravel pull out and I nearly dumped as my front wheel rolled over a big rock in the middle of the road. 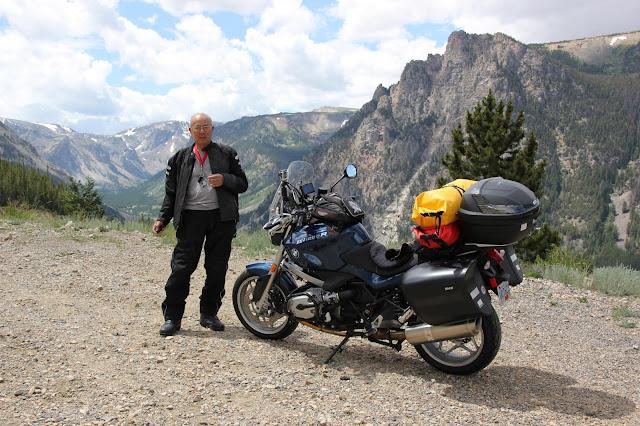 The day started very hot at the bottom so I removed most of my layers, but I was freezing at the top.  There was still snow up there 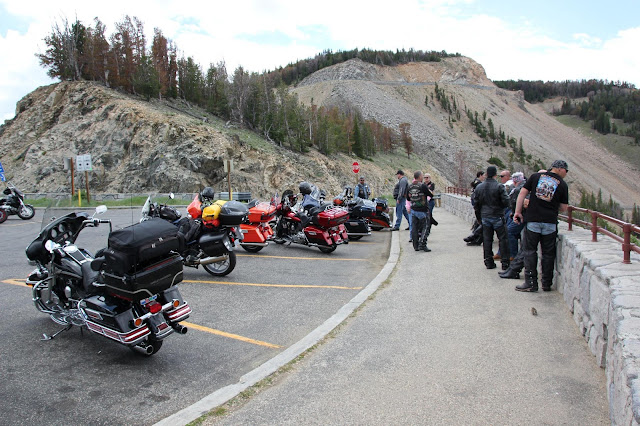 This was the first viewpoint.  Two groups of Harley riders.  they gave me the evil eye as I parked among them

I even managed to squeeze in the Chief Joseph Scenic Highway 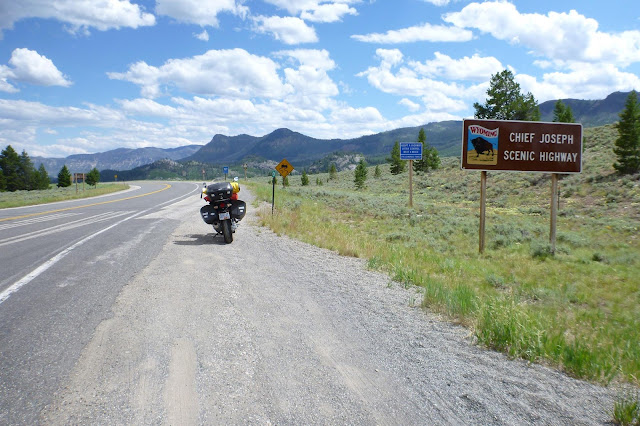 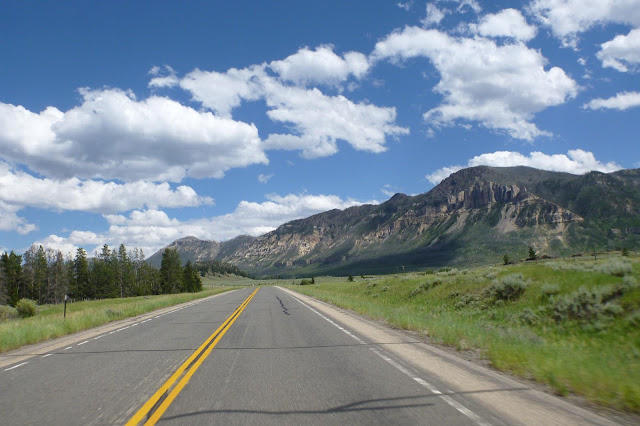 Some road has patchwork and tar snakes 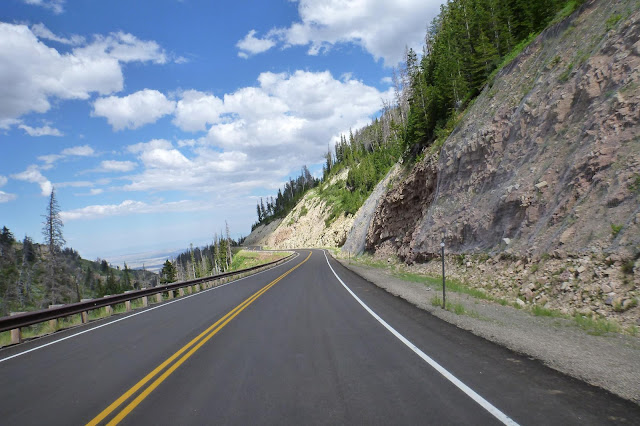 and other sections are newly paved 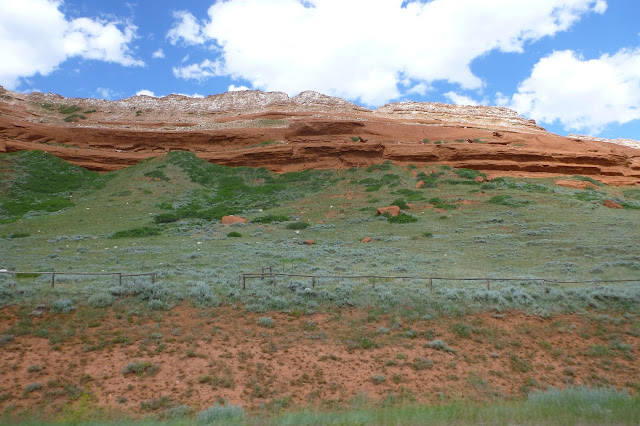 You travel at the bottom of a valley and then you hit many switchbacks at the Eastern End.   Karen !  Yes, I mean lots of switchbacks mainly uphill.  I think you may like them , , , 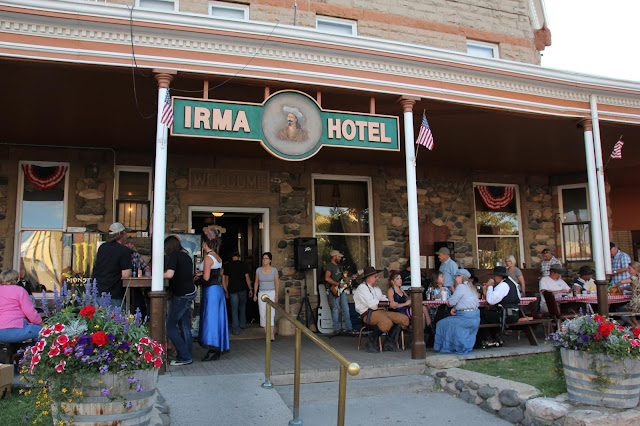 I ended up my day in Cody, WY.   Here is the famous Buffalo Bill's Hotel Irma.   No, I didn't have a meal here.  When I am alone I just eat junque food 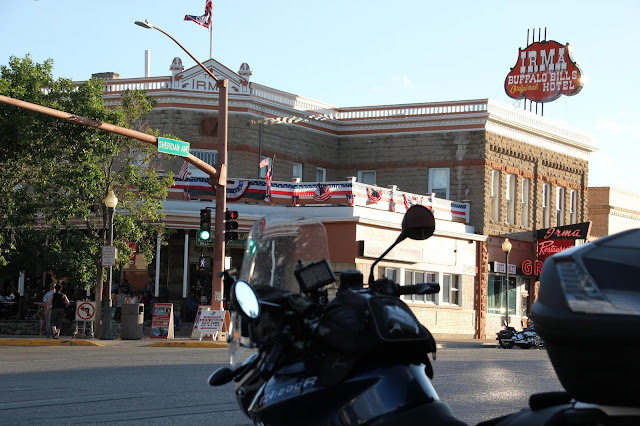